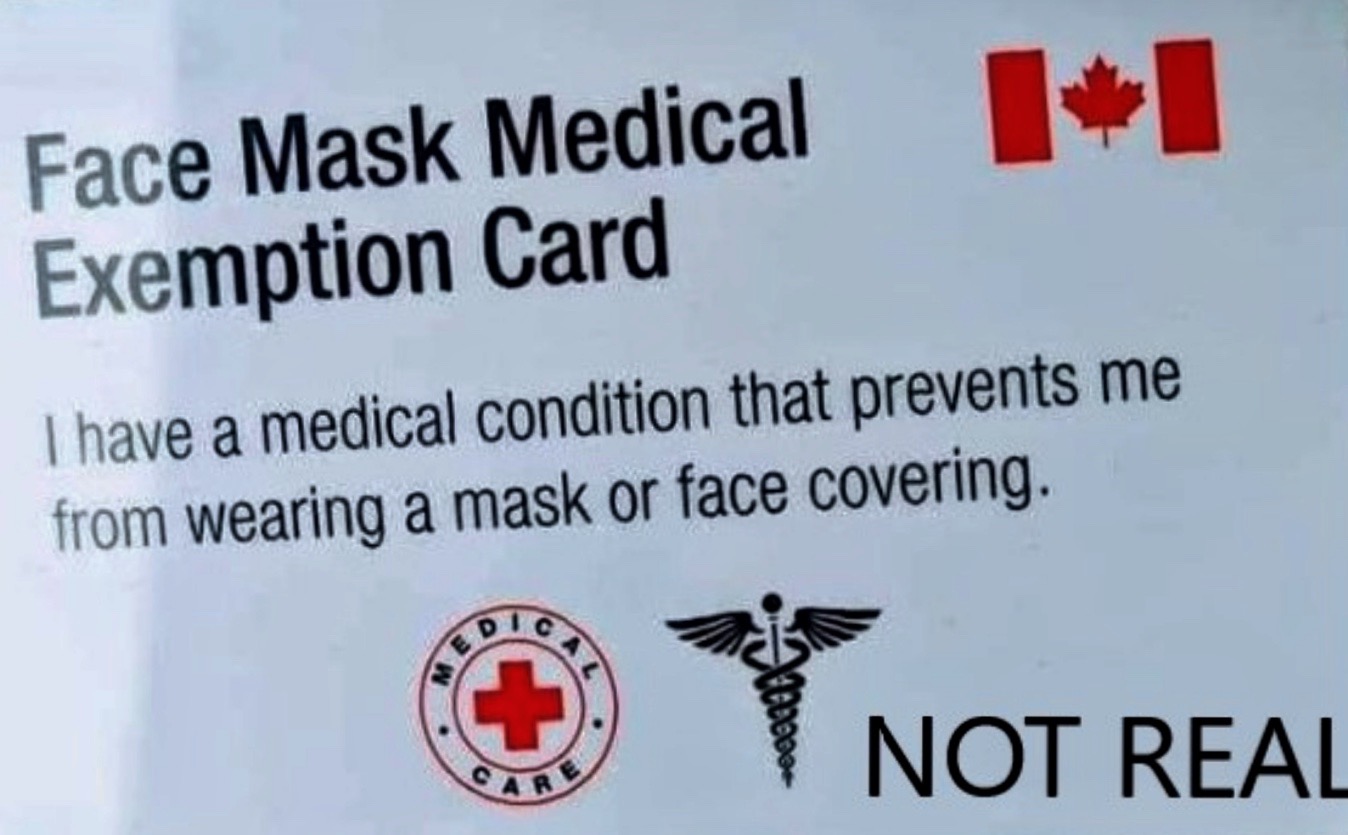 Public health is warning businesses that these cards, being distributed by anti-mask groups, are fake. Businesses are not required to ask for proof of exemption and therefore such official documentation does not exist. (WDGPH Twitter image)

The cards – complete with the illegal use of a small Canadian flag and a version of the Canadian Red Cross emblem in an attempt to appear official – state the holder is exempt from wearing a face covering due to a medical condition.

Yet it appears from social media posts by anti-mask groups that many users of the fake cards do not have a medical condition and are using them simply to flout bylaws or public health orders requiring face coverings in businesses.

The cards, however, are an exercise in futility in the Wellington-Dufferin-Guelph region, as public health officials have repeatedly stated businesses do not require proof of the following mask exemptions under the WDGPH order:

“The order specifically states that commercial establishments should not ask for evidence to support an exemption, so in that sense, the cards don’t make a difference,” said WDGPH spokesperson Danny Williamson in an email statement on July 16.

Public health has not yet had any businesses report that customers are using the cards, which officials first discovered on July 15, though it’s possible they were circulated prior to that date.

But what is troubling for many residents is the idea that some people would purposely lie about medical conditions just to avoid wearing a mask, thus putting other customers at risk.

“It is unfortunate that individuals are circulating false documents,” said Williamson.

He added, “For individuals who can’t wear a mask due to legitimate reasons, this can be a stressful time.

“We encourage everyone to practice empathy in adhering to the order, and encourage commercial establishments to look for other ways to safely accommodate those who can’t wear a mask.”

In general, Williamson said, feedback on the mask order has been positive, and “the adoption rate in our region has been excellent and we thank people for doing their part.”

However, he did note there has been “some vocal opposition, mainly on social media.”

Anti-mask groups and their supporters on social media – the Advertiser is not naming them in order to prevent the spread of misinformation – continually post conspiracy theories and debunked medical advice.

There is overwhelming evidence from reliable medical experts that proves masks, if worn properly, help stop the spread of diseases such as COVID-19.

In the GTA, members of anti-mask groups have recently shown up in hospital emergency rooms with their fake cards, some of which are being sold online, and filming the reaction of health care professionals.

Williamson said he is not aware of any such cases at hospitals in the WDGPH region.