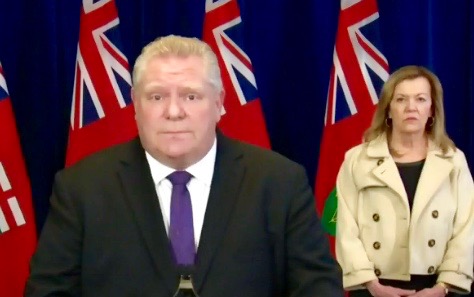 TORONTO – The provincial government is extending a state of emergency and significantly expanding testing as part of its ongoing response to the COVID-19 pandemic.

On April 11 Premier Doug Ford announced Ontario is extending to April 23 all emergency orders, including:

“I understand the actions we are taking are affecting the lives and livelihoods of people across the province, but these are extraordinary times and we need to do whatever we can to keep individuals and families safe and stop the spread of this terrible virus,” said Ford.

“We all must continue to do our part by staying home and practicing physical distancing. With the proper precautions and additional measures we’re taking today, I am confident we will get through this together and stronger.”

Also on April 11, the province introduced new steps to help stop the spread of COVID-19, such as:

On April 10 Ford announced an enhanced provincial COVID-19 testing strategy that officials say will increase the number of tests processed each day to 8,000 by April 15 and to 14,000 by April 29.

“We’re laser-focused on ramping up our testing capacity so we can protect the most vulnerable in our communities and those who protect them, like our frontline health care workers and first responders,” said Ford.

“By expanding our testing capacity, we will be able to find cases faster, intervene earlier, reduce the spread, and save lives.”

In addition to ongoing testing at 100 assessment centres across the province, Ontario will proactively test several priority groups:

Provincial officials say overall lab capacity will have been expanded by the time the expanded testing is in place.

Previous steps by the province “helped to quickly eliminate a backlog of approximately 10,000 people within less than two weeks,” officials say.

To date, the province has conducted over 94,000 tests and re-established same-day testing results, accessible to patients through a new online portal.

On April 10 the province also issued an emergency order immediately preventing child care operators from charging parents fees where care is not being provided.

The order also means that parents cannot lose their child care space because they are not paying fees.

“We are defending the interests of consumers and protecting parents’ hard-earned money by ordering child care centres to stop charging fees for services not rendered,” said education minister Stephen Lecce.

“From protecting health and safety, to jobs and incomes, we will do whatever it takes to get our province and our incredibly resilient people through this.”