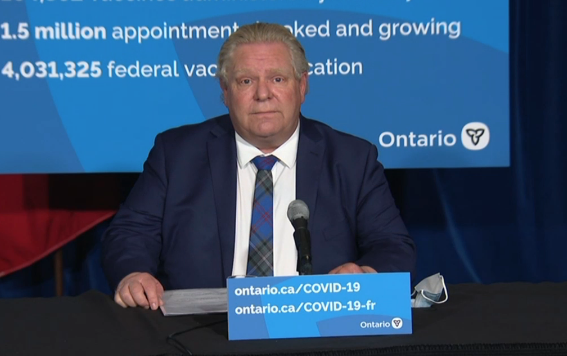 TORONTO – The Ontario government has announced a three-step plan to reopen the province.

“As a result of the strict public health measures we introduced to stop the spread of COVID-19 variants, we are seeing a steady improvement in our situation, as ICU and hospital numbers begin to stabilize,” Premier Doug Ford stated during a May 20 press conference.

In a separate move, the province announced that the current stay-at-home order, initially introduced on April 8, will begin winding down on May 22, permitting outdoor gatherings of up to five people from different households, as well as the reopening of outdoor recreational amenities such as golf courses, tennis courts and skate parks.

The province’s three-step reopening plan doesn’t have a definitive start date, but health minister Christine Elliott said it should commence “around the week of June 14” when its estimated 60 per cent of the province’s adult population will be vaccinated with at least one dose.

“The province will confirm closer to the expected start of step one,” states a press release.

Remote learning for public and private elementary and high school students across the province will remain in place.

Each step of the province’s “roadmap” for reopening requires a vaccination threshold to be met before advancing.

“The speed at which we get through this reopening will come down to one thing — how quickly we get people vaccinated,” Ford said, noting anyone over the age of 18 in the province is eligible to receive a shot.

“That daily vaccination rate is the single biggest factor in our fight against [COVID-19] right now.

“It’s how we start to look forward to a great summer.”

The first step focuses on resuming outdoor activities and expanding gathering limits to up to 10 people, outdoor dining of up to four people per table and allowing 15% capacity in non-essential retail settings.

“This would also include outdoor activities, such as pools, splash pads, fitness classes, zoos, and religious services,” Elliot said.

Step two, requiring 70% of adults to have at least one vaccine dose and 20% with two doses, allows:

Step three, requiring 70 to 80% of adults to have a single vaccine dose and 25% with two, would permit larger groups of people where face coverings can’t always be worn, including but not limited to gyms, cinemas, performing arts facilities, indoor dining, museums, casinos and bingo halls.

“The province will remain in each step for at least 21 days; this will allow us to evaluate any impacts on key indicators and determine whether the province is ready to safely move to the next step in this plan,” Elliot said. 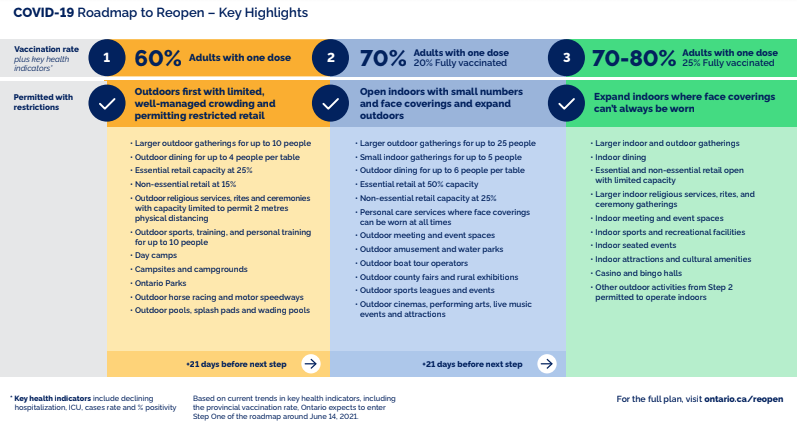 The latest COVID-19 modelling data, presented during a May 20 briefing, shows reopening around mid-June will allow cases to continue trending downward to below 500 per day across the province by mid to late summer.

Reopening on June 2, when the present stay-at-home order expires, would cause a bump in cases to slightly over 1,000 per day across the province later in the month, before dipping down at the end of July.

The models consider a “partial reopening” (based off March levels of activity) with between 100,000 and 150,000 vaccinations per day, and no introduction of a “variant of concern.”

Reopening schools now, Brown said, would increase cases, but in responding to a reporter’s question he said schools should be among the “first things to open.”

As of May 20, over 7.5 million COVID-19 vaccine doses have been administered in the province with 473,759 fully vaccinated.

The province’s chief medical officer, Dr. David Williams pointed out the current case rate of 114.2 per 100,000 people remains “a lot higher” than the dip seen between the second and third waves and “nowhere near” numbers from last summer.

The rate of tests coming back positive, at 5.2%, is also lower than the near 10% seen a few weeks ago, but still worse than the one to two per cent seen before the second wave.

“So, we have a ways to go, but we’re moving in a good direction,” Williams said, noting the case rate across the province had decreased by 22% between May 8 and 14.

While case numbers and hospitalizations are falling, Brown said the number of hospitalizations has “just dropped below the peak of wave two” and called on Ontarians to remain cautious and to get vaccinated to bring about the pandemic’s end.

Of course, none of the modelling data considers the introduction of new “variants of concern,” which Brown called a “wild card” that could turn everything upside down.

“The outlook is cautiously optimistic but this is not a time to let down our guard as we try to control spread,” Brown said.