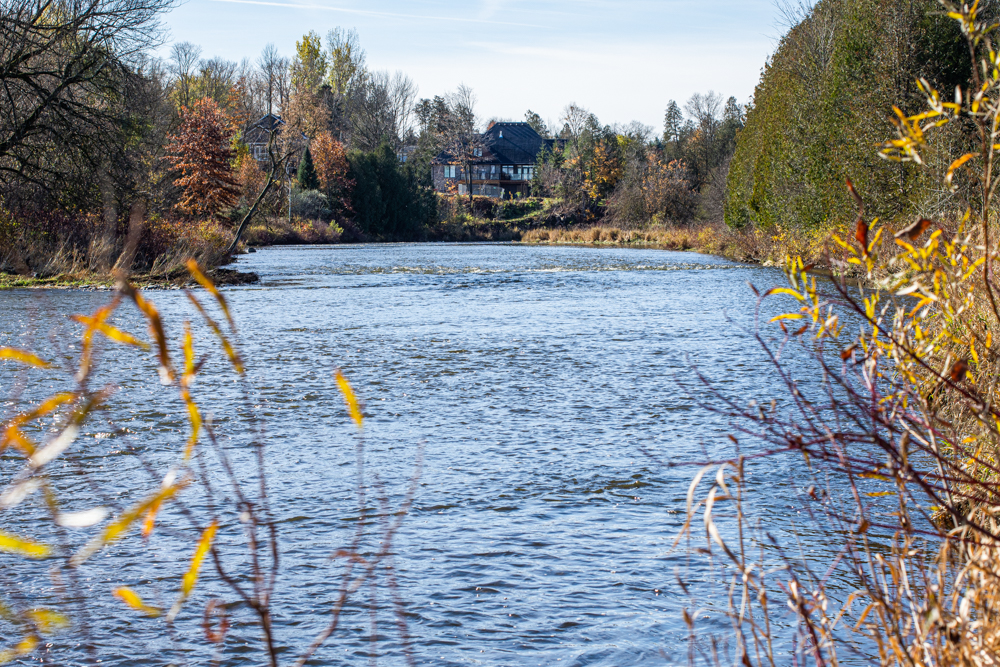 Fergus residents have banded together in opposition to a potential $6.2-million bridge suggested for construction over the Grand River to link Wellington Road 29 and Anderson Street. Pictured is the Grand River seen from Pierpoint Park in Fergus. Photo by Jordan Snobelen

WELLINGTON COUNTY – Where lush woodlands border the Grand River, separating south and north Fergus at Pierpoint Park, there may one day be a bridge built.

Originating as a consideration in Centre Wellington’s transportation master plan passed in 2019, a bridge across the river is suggested to link Wellington Road 29 and Anderson Street, north of Wellington Road 18.

But if neighbouring residents get their way, it’ll never be built.

Peter Boyer, one particular resident leading the Pierpoint neighbourhood’s opposition, says the bridge should never have been considered by the township to begin with because it will negatively impact the Grand River, the surrounding quiet residential neighbourhood and destroy Pierpoint Park. 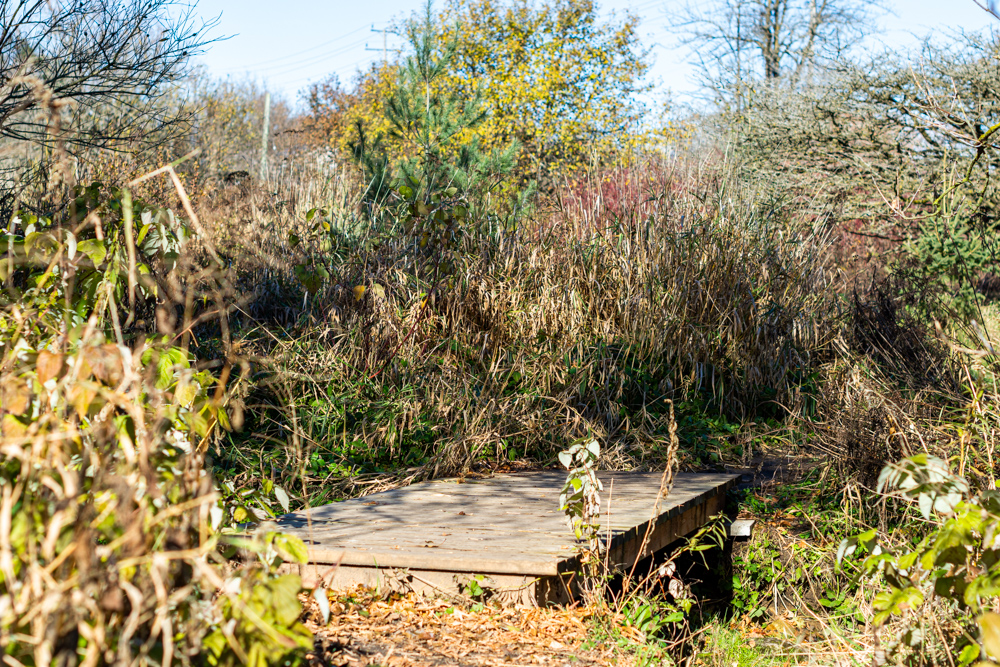 A boardwalk bridge crosses a creek winding its way through Pierpoint Park in Fergus. Photo by Jordan Snobelen

The Pierpoint bridge is one of the township’s proposed remedies to modelling data showing “a deficiency in north-south connections across the Grand River” with anticipated future growth, according to its transportation master plan.

“Constructing a new bridge at this location as opposed to enhancing the existing bridge further east at 2nd Line helps to curb urban sprawl by providing a crossing closer to existing and proposed development areas,” the township’s transportation plan states on page 68.

The plan also noted 2nd Line would require improvements “through paving and other measures to be able to handle vehicle and truck volumes.”

On page 72 the plan states, “The Wellington Road 29 bridge could also serve the industrial area in the northeast portion of Fergus as additional improvements are made for connectivity on the eastern edge of the Fergus urban area.”

The eventual intention would be to link the bridge bypass route back west to Highway 6, cutting over Fergus’ north-eastern spread.

The master plan recommends consideration of the Pierpoint neighbourhood bridge at a cost of $6.2 million to be built in 2041 or later.

In reaching out to the Advertiser about the neighbourhood’s concerns with the potential bridge, Boyer referred to the plan for the bridge as an “error” by the township which has now materialized in the county’s ongoing transportation study, the Roads Master Action Plan, analyzing transportation requirements to accommodate future growth through to 2041.

Boyer considers himself an involved citizen but decried the civic process as “completely inadequate,” casting blame on a lack of awareness during the public consultation process for residents not having known about the plan years ago.

Given the support of the 75 members involved in the neighbourhood group Boyer is now coordinating, he says there would have been plenty of residents to object to the bridge’s location – had they only known about it.

Now, the group is taking its fight to the county level.

One of the Pierpoint neighbourhood members is Melanie Lang, a mother, business consultant and past Wellington-Halton Hills candidate for the 44th federal election.

With a pen held to paper tracking the many points to be made during the short speaking time allotted to delegates, Lang frequently looked up from the podium to make eye contact with councillors.

She touched on concerns with the effects on fish and wildlife, from salt runoff and chemical pollution into the river from transportation; the park’s status as a flyfishing destination; numerous irreplaceable old growth trees standing in the area; and enjoyment of the space by neighbourhood residents and children from nearby John Black Public School.

The park space, over which road infrastructure would be built, is named after Richard Pierpoint, a Black man who was a former slave and soldier before finally settling on land granted to him as a free man in Garafraxa in 1820, now modern-day Fergus. 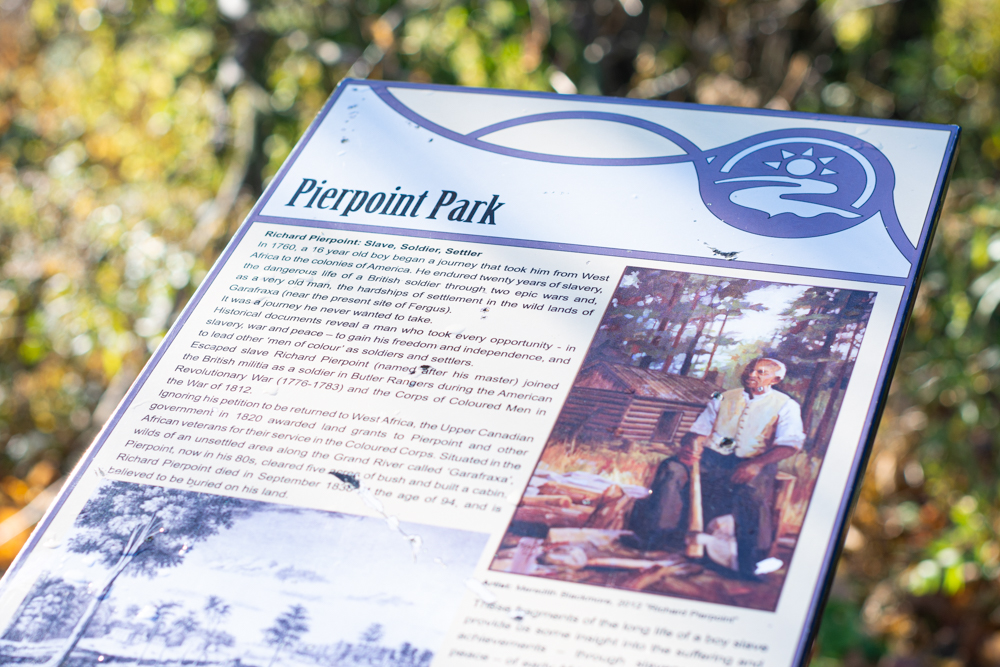 A plaque stationed at the Pierpoint Park entrance in Fergus details the history behind the park, once owned by, and named after, Richard Pierpoint. Photo by Jordan Snobelen

“It is insulting to Pierpoint’s legacy that we would ignore and disrespect a [historically significant site], should the county approve building a truck route that would severely diminish and limit its value and public use,” Lang said.

She also mentioned the township had previously been gifted the Pierpoint land and agreed to specific conditions outlining its use.

“The proposed bridge and bypass is in violation of this agreement and will have legal implications,” Lang told the committee.

Longtime neighbourhood residents Bob and Lynda Grant bought 25 acres next to their present Lamond Street home of 40 years in 1997.

A portion of that acreage contained what was Pierpoint’s property, later donated to the township by the Grants in 2010.

“We decided to donate 10 acres to the township, which gladly accepted it … there were a number of conditions that were put on that gift; one of which is that it would be left in a state of nature,” Grant said in a phone call with the Advertiser.

“It’s a peaceful place to kind of go for a walk and enjoy nature the way it should be.”

Lang said the Pierpoint neighbourhood group is asking for a compatible option to be found further east.

“Why not now create a bypass away from residential areas that will allow for growth to happen around an existing road rather through an established neighbourhood?” she asked.

“The environmental ecosystem and societal enjoyment of this area would be enormously diminished if a bridge is constructed and trucks permitted to dominate this area.” 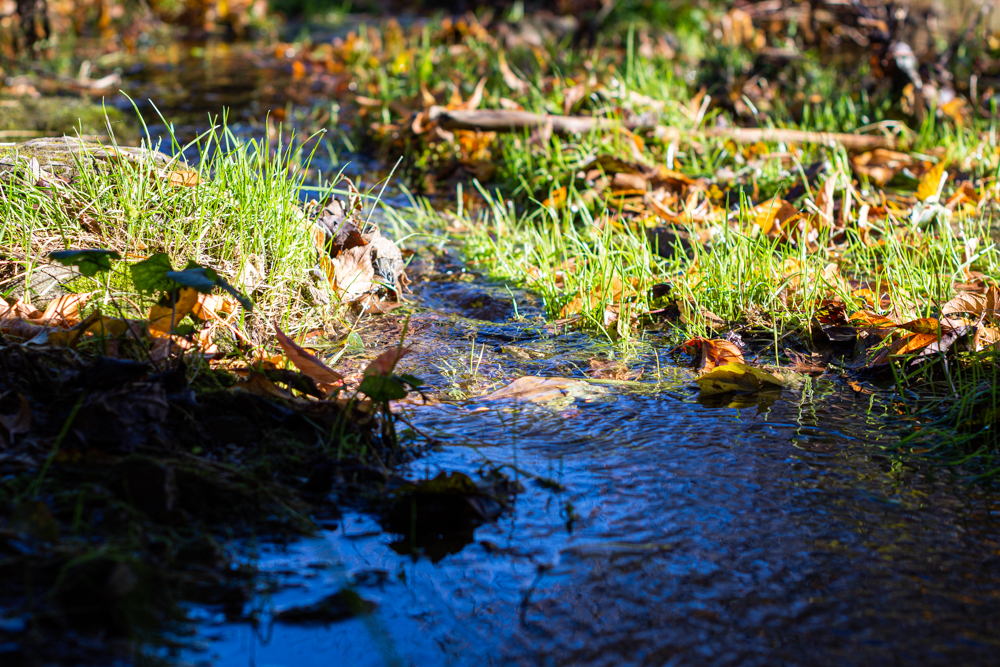 Creek water flows and winds through Pierpoint Park in Fergus before emptying in the Grand River. Photo by Jordan Snobelen

Linton, also mayor for Centre Wellington, said the county’s transportation study follows recommendations from the township level and noted there was “a significant amount of consultation” before Centre Wellington’s plan was passed.

Linton wondered why the group’s “interesting points” and “really important information” were not brought up during the consultation period.

Linton has previously defended the township’s public consultation process before another delegation on behalf of the Concerned Citizens of Wellington 7 and 17, an Alma group taking issue with another bypass in the township’s plan.

Lang bypassed Linton’s question, saying the issue has since progressed from the township level and “gone to the next level of consideration in terms of this committee here today.”

“We completely support and understand the need for additional roads and bypasses; I think the issue at hand right now is simply the location,” she said. “We’re not here to stop the bypass.”

Seeley asked county staff to clarify what the process is for identifying where the bridge would end up.

County engineer Don Kudo said recommendations, such as the bridge bypass, are merely preliminary suggestions, explaining the purpose of a master plan is to identify problems and alternatives.

“This particular project, the bypass in Fergus on the east side, would undergo a great deal of further detailed study in order to come up with a final recommendation,” Kudo said.

County councillor Steve O’Neill, who earlier met with the group, told the committee to make no qualms about the bypass.

“I don’t believe Wellington County should be supporting an option in our action plan that has terrible consequences to an environmentally and historically important area of the county,” O’Neill added, suggesting an alternative location be found further east. 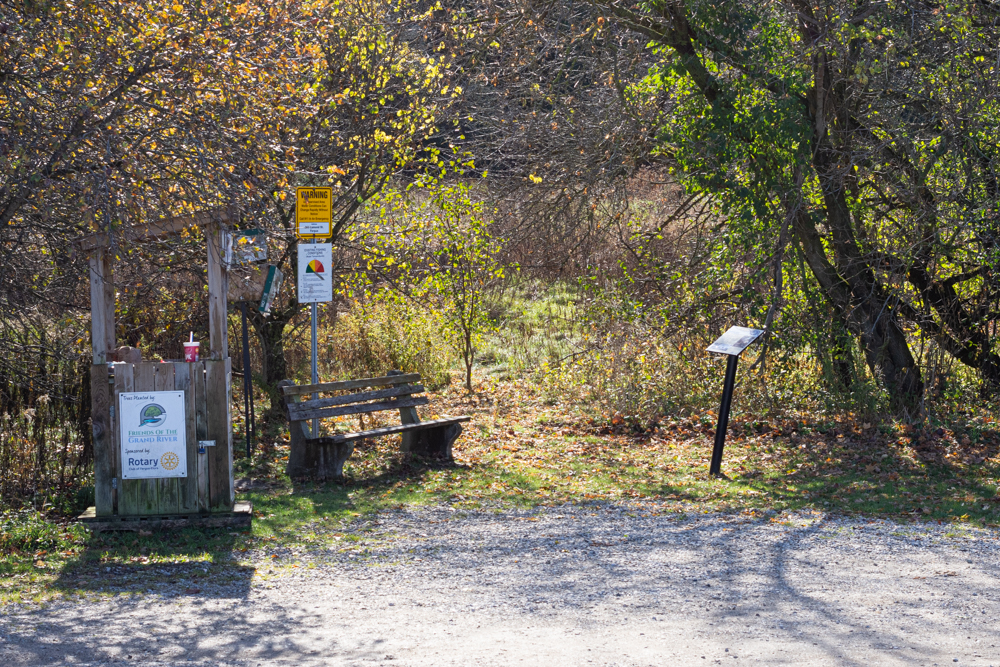 The entrance of Pierpoint Park in Fergus. Photo by Jordan Snobelen

Addressing Lang, Lennox said the county’s study is the “beginning of a longer process,” adding it was gratifying to see citizens engaged now, rather than waiting for construction.

“This is absolutely the right time to share this information,” said Lennox.

One citizen mentioned and commended by councillors was Connor Mulligan, a Grade 6 John Black Public School student, who addressed a letter to committee members, published in the Advertiser, outlining his pointed opposition to the potential bridge site.

The delegation and correspondence was received for information by the committee.

Boyer told the Advertiser the group hopes the roads committee “will listen to our presentation and read our submission and understand what we’re trying to tell them and we really hope they will not … bisect our community with a truck route … that would be extremely unfortunate.”