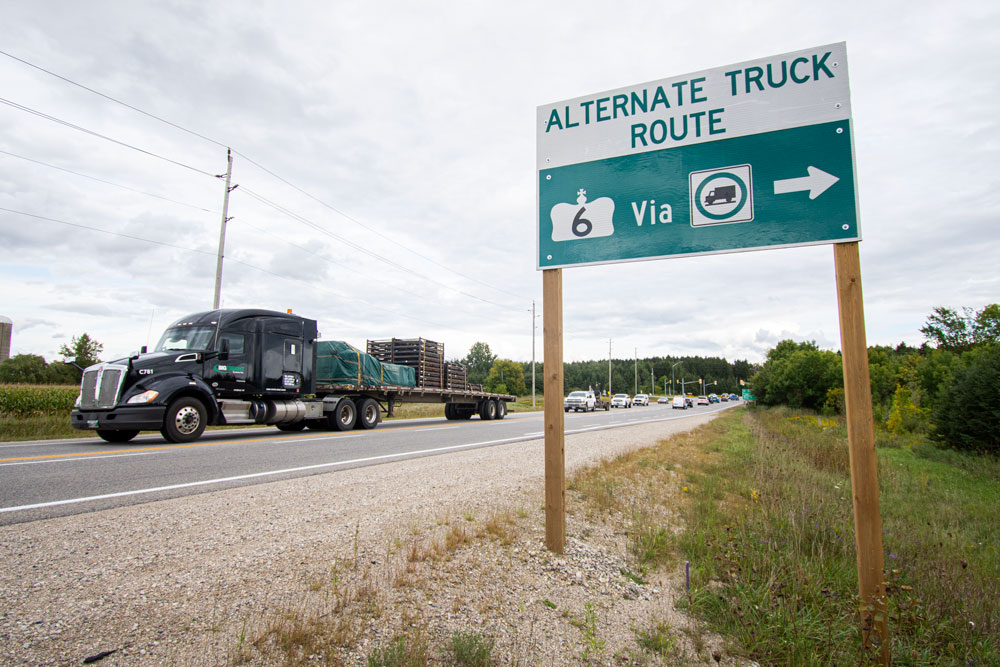 James Ferrier, on behalf of the Concerned Citizens of Wellington 7 and 17, spoke to the county roads committee on Sept. 14 about concerns with a truck bypass routed through the hamlet of Alma in the Township of Mapleton. A large sign is seen travelling southeast along Highway 6, signalling truck traffic to turn onto Wellington Road 17 ahead, along a Highway 6 bypass routing trucks through Alma. Photo by Jordan Snobelen

WELLINGTON COUNTY – James Ferrier, more accustomed to operating a tractor than speaking to politicians, rose before the county’s road committee on Sept. 14 on behalf of the Concerned Citizens of Wellington 7 and 17.

He asked committee members to support removal of signs pointing trucks along a contentious Highway 6 truck bypass and to reconsider the route entirely.

The grassroots citizens organization, made up of 100 Alma residents, formed in opposition to a bypass routing truck traffic up Wellington Road 7 past Fergus and Elora and around through Alma on Wellington Road 17 before linking up again with Highway 6.

Ferrier said the group is concerned about the safety of children in the town with increased heavy-duty traffic, the cost borne by county taxpayers to repair roads from heavy-duty use and having a truck route “forced” on residents.

“We feel that the unwanted portion of traffic that Fergus or Centre Wellington is seeing should not be forced on the outlying municipalities,” Ferrier said.

He accused politicians of a lack of communication and consultation, saying “it’s unacceptable that this very real example of handoff in responsibility, cost and risk can happen in our area.”

Ferrier concluded by imploring the committee to put forward a motion reconsidering the bypass and to remove signage highlighting the route. 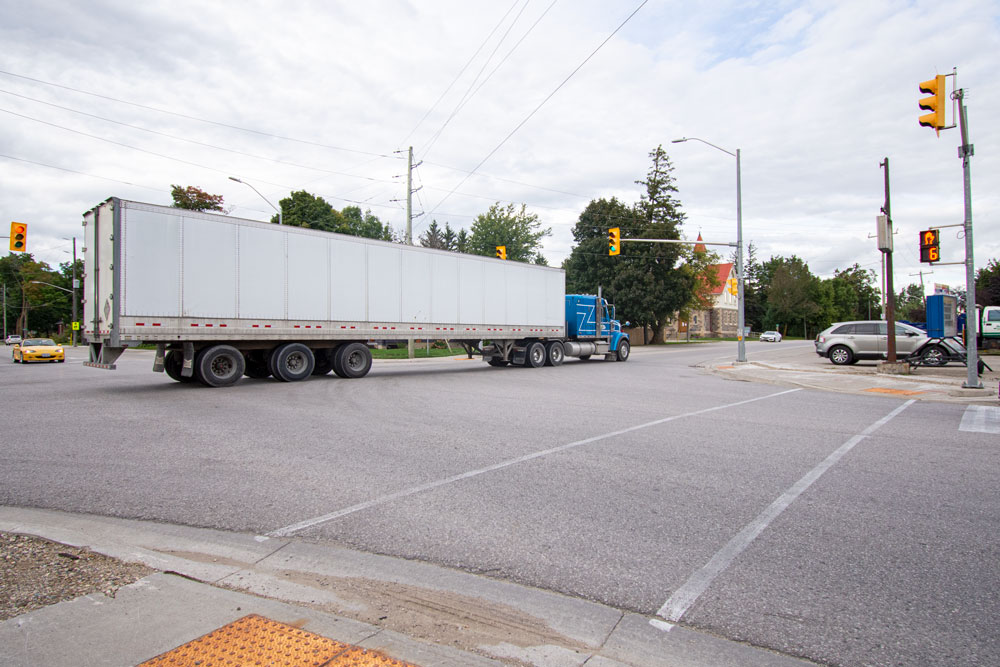 Committee member and councillor Jeff Duncan of Erin empathized with Ferrier, saying the county should have guidelines to better communicate with residents in the future, but said a reconsideration wouldn’t pass a committee vote.

Duncan suggested coming up with a “plan B” with safety measures like street lighting, flashing speed signage or sidewalk improvements. He even slipped in a baseball reference into his suggestions.

“Instead of striking out trying to get a home run,” Duncan said smaller measures would get more traction politically.

After Ferrier addressed the committee, county engineer Don Kudo presented a report looking at traffic volume throughout the county and specifically along the truck bypass route.

Data collected three times per year between 2015 and 2021 shows truck traffic peaking in 2018 and trending downward to 2015 levels.

But signs signalling the available route to truck drivers only went up in early June, making it difficult to tell if there has been an increase in truck traffic along the route, said county roads manager Joe de Koning.

“We don’t have enough data over time to show to true trends,” he said. 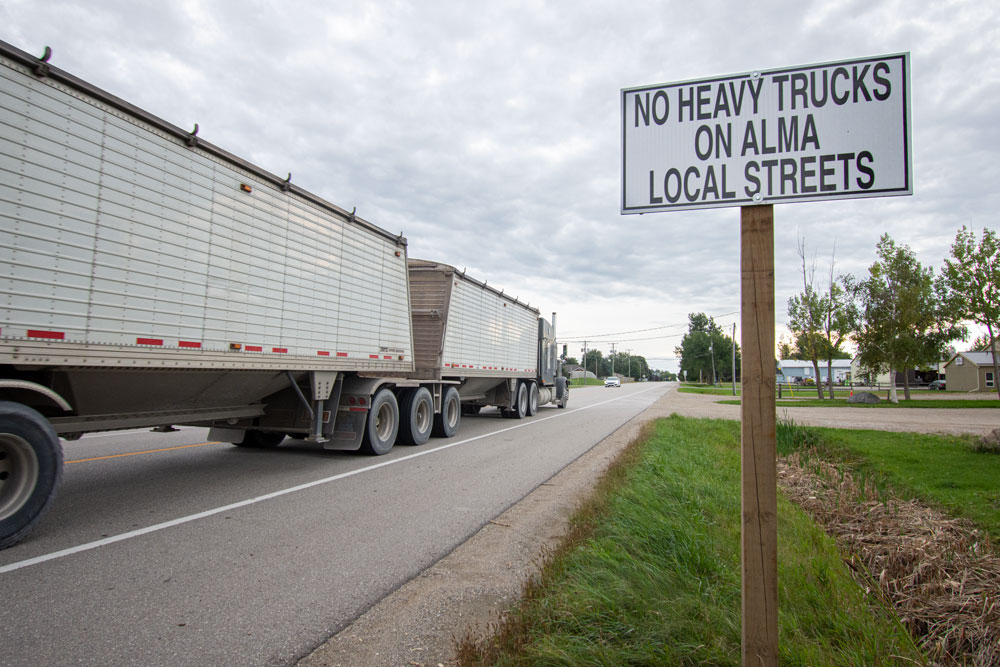 A sign along Wellington Road 17 travelling southwest into the hamlet of Alma, located within the Township of Mapleton. Photo by Jordan Snobelen

Puslinch Mayor James Seeley echoed Duncan’s earlier comment and asked if a policy should be in place to guide implementing bypasses in the county.

Linton said “hundreds and hundreds” of responses on Centre Wellington’s transportation master plan were received through the municipality’s “Connect CW” portal and two open houses were held at the Centre Wellington Community Sportsplex in Fergus.

“We were looking for widespread feedback, so it’s not [that] there was no consultation—there was significant consultation,” he said.

As far as process goes, Linton said Centre Wellington council had to first approve the municipality’s transportation master plan, before it went to the county’s road committee and county council for approval.

“At the end of the day, there’s a process in place and we follow that process, and [it] was a pretty long, arduous process actually,” Linton said, calling it “a very public process.”

“It was an existing county route,” he said of Wellington Roads 7 and 17.

“At the end of the day, these signs are suggestions – we can’t enforce traffic and trucks to use a certain route.” 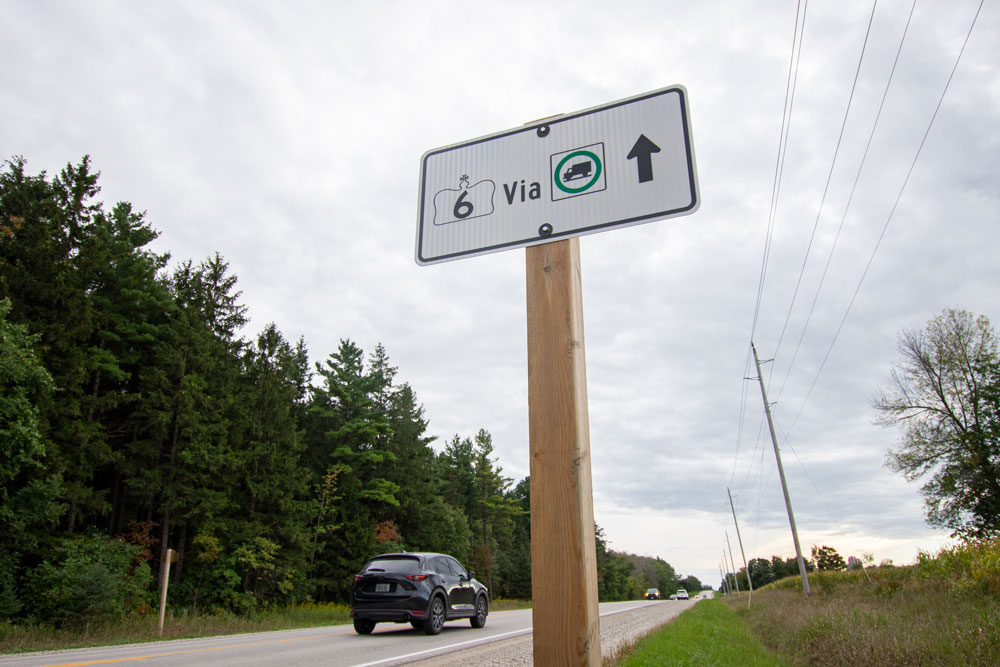 A sign along Wellington Road 17 directing truck traffic travelling southwest into the hamlet of Alma, located within Mapleton. Photo by Jordan Snobelen

Duncan clarified to Linton his earlier call for better communication with residents, saying Centre Wellington did their job but his issue is with ineffective communication at the county level.

Committee chair and Wellington North Mayor Andy Lennox said significant traffic challenges will continue with growth in the county and Highway 6 – the “traffic backbone of the county” – isn’t being factored into discussions.

“If we’re going to worry about bypassing truck traffic in Fergus, that’s Highway 6 traffic, that’s provincial traffic; they need to be at the table, we need to make sure they’re at the table to be coming up with solutions for that,” Lennox remarked.

He added the province and Guelph need to participate in solutions as the county absorbs more growth and traffic spills out from urban areas.

“I think we need to start taking political action to our provincial counterparts and saying … ‘what role can you play?’”

County staff was directed to report back on a communication plan for future signage on roads affecting more than one municipality, in addition to a request for the OPP to deploy Black Cat radars in Alma to measure truck traffic volume.

Speaking with the Advertiser on Sept. 15, Ferrier said he left the roads committee with “mixed feelings.”

“What’s done is done, by the sounds of it,” he said, adding he believes politics are behind the unwillingness of committee members and councillors to backtrack on the bypass.

Ferrier said the “door’s not completely closed for us” and the group will still present a petition against the bypass with “huge support” from surrounding community members.

In the coming weeks, Ferrier said he’ll be meeting with Davidson to discuss other options and meeting with the citizens’ group to get a consensus on what concessions they’re willing to make.