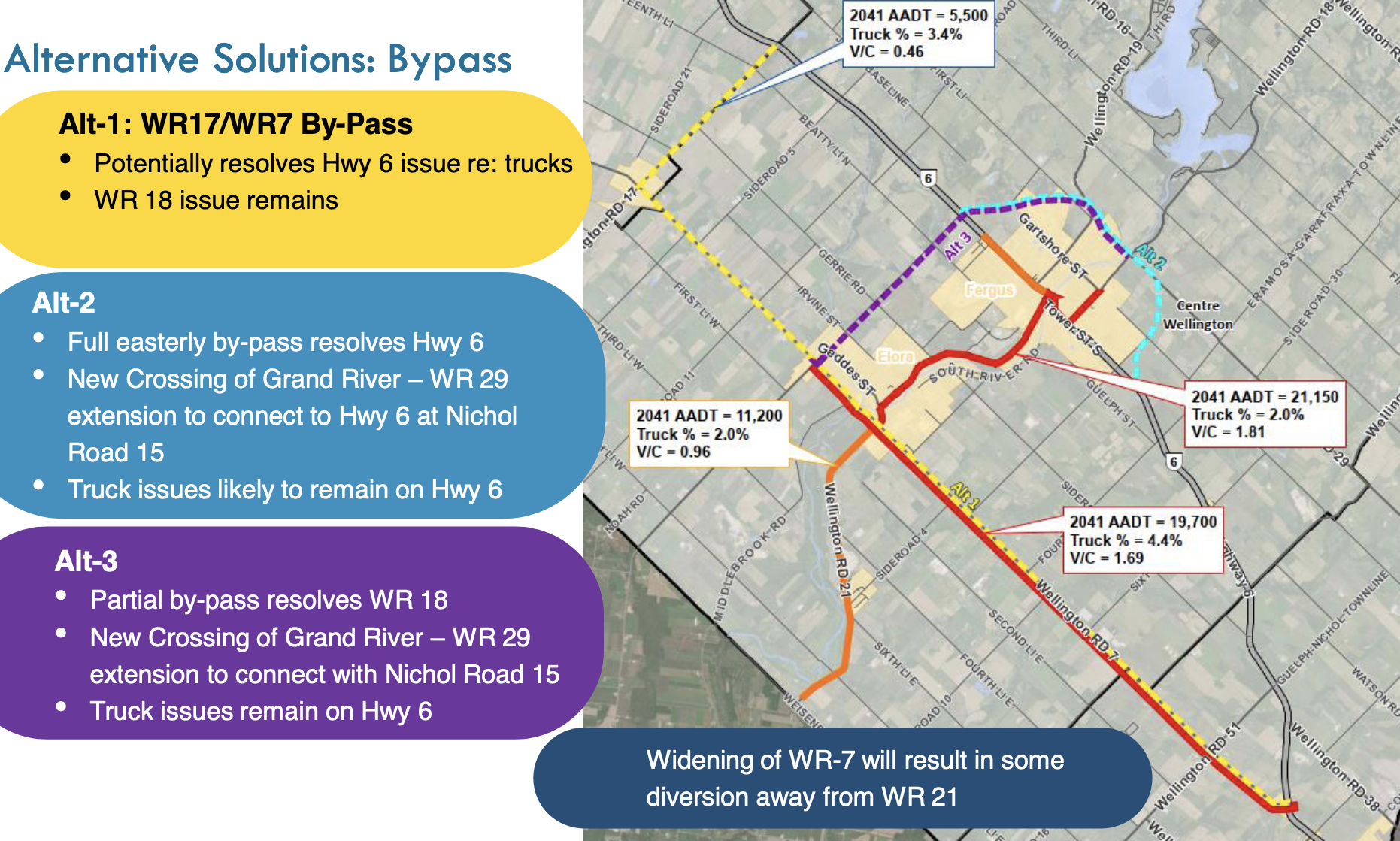 WELLINGTON COUNTY – Residents voiced concerns at a June 17 public meeting about speed management and diverting trucks through Alma along a county bypass around Fergus.

Truck bypasses and road safety were the biggest concerns brought up by at least 70 participants at the virtual public meeting on the county’s Road Master Action Plan (RMAP) study.

Looking to 2041, the consultants have been tasked with studying improvements required for population growth, traffic and speed management issues; funding; and planning for county roads connecting and travelling through municipalities.

The last undertaking of this kind, the Guelph Wellington Transportation Study, was completed in 2005 with much work having been completed since.

Centre Wellington completed its transportation master plan in 2019 and Guelph is aiming to have its completed in the fourth quarter of this year. The province also released its own transportation plan for southwestern Ontario last year.

And the vast majority of drivers – 73.3% – are making daily trips within the county, with 11.9% travelling to Waterloo, the next most popular destination.

The initial focus of the study was short-term operational challenges, Dillion project manager and transportation planner Dennis Kar said at the public meeting, but the focus over past months has shifted to long-term planning, looking at county roads on which travel will be made difficult by increased traffic volumes.

The consultants identified five county roads that are forecasted to experience significant delays, where volume exceeds what a road can handle, by 2041:

Solutions proposed by the consultants, range between modifying travel behaviours and current infrastructure to traffic system optimization through technology and turning lanes.

Several queries from the public after the presentation by Dillon Consulting called into question the analysis of bypassing trucks along the route and the impact to local communities like Alma.

“Along 17 there’s four fairly large farms and they are the only residences and farms on 17,” resident James Ferrier said at the meeting.

“I’m aware that none of us were consulted at all or questioned on what impact having additional trucks on our road would cause.

“Wellington 17 has very poor sight lines as it is. Driving tractors, combines, other equipment, we often get passed blindly on hills; that seems to be increasing with the number of trucks on the road.”

County engineer Don Kudo said the Centre Wellington master plan recommended the alternate route on Wellington Roads 7 and 17, stressing trucks are permitted on county roads. The alternate route, he added, is not “necessarily a designated truck route by any means” but is available for trucks to bypass downtown Fergus should they wish.

The alternate route signage was approved by county council in February 2019.

Kudo also said an earlier detour along the same route was used during the David Street bridge construction in Fergus.

“Our review of the detour route traffic volumes and truck traffic did not notice any significant change,” Kudo said, indicating trucks have historically been using the route.

A number of questions were also submitted concerning speed enforcement and road safety, but consultant Paul Bumstead said speed management components will be addressed in the next step of the study with “about 17 locations” up for review with potential migration or corrective actions.

“Nothing is a done deal,” Kar said.

“This forms one piece of the puzzle … we really need to hear from you and we’re going to take that feedback and then revisit the alternatives, the evaluation criteria in the evaluation before we move forward and present something to county council,” he said.

Kar said an online survey will be posted to www.wellingtoncounty.ca/rmap within the next couple of weeks with the hopes of getting additional input.

The master plan is scheduled to be brought before the county roads committee for approval in November.