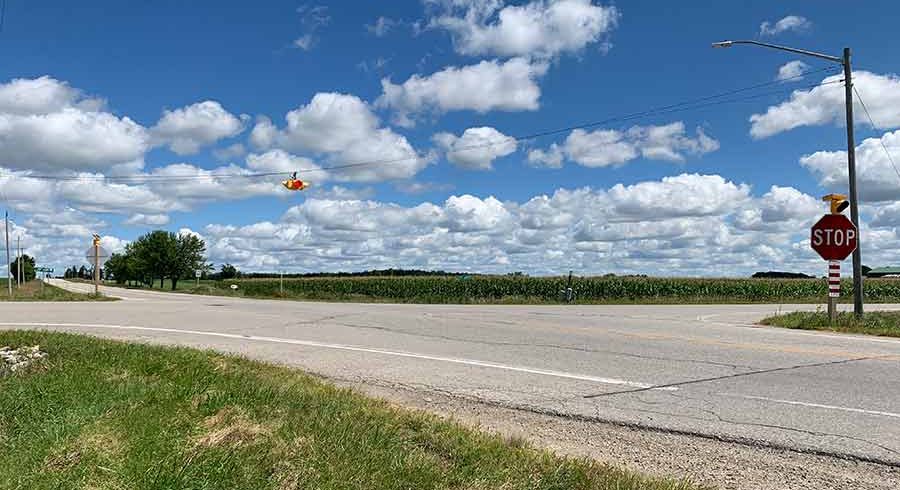 PERTH COUNTY – Following years of discussion about installing a higher level of traffic safety controls at the intersection of Perth Road 140 and Perth Line 91 (Wellington Roads 8 and 9), Perth and Wellington Counties have arrived at a temporary solution. Advertiser file photo

PERTH COUNTY – Following years of discussion about installing a higher level of traffic safety controls at the intersection of Perth Road 140 and Perth Line 91 (Wellington Roads 8 and 9), Perth and Wellington Counties have arrived at a temporary solution.

At its Nov. 19 meeting, Perth County council voted in favour of installing temporary traffic signals at the intersection, known locally as the S-bends, in partnership with Wellington County.

In the summer of 2016, Wellington County staff approached Perth County about the potential construction of a roundabout at the intersection. Perth asked for justification for a roundabout and the supporting accident history.

“Wellington did not have a policy, specific criteria or justification for roundabouts, but they certainly did have previous experience constructing roundabouts and they did so at an intersection east of this location (Teviotdale),” said John McClelland, Perth County’s director of public works.

The reasoning for the roundabout was a fatal collision in 2015 and the skewed geometry of the intersection, which does not meet at 90 degrees.

Dealing with the intersection is part of a Wellington County plan to prevent deaths on its roadways.

“Of course roundabouts have many safety and environmental benefits which I’m sure we can all agree with,” said McClelland.

Perth County did not receive accident data until late 2017 and that data indicated that this intersection did not have a high collision rate.

“What I mean by that is within the Ontario Traffic Manual under an all-way stop warrant or a signal warrant there is a collision warrant as part of that,” he said.

“A high collision frequency is defined in those warrants as on average four accidents a year over three years. Since that intersection did not have a high collision rate and what we found was there were intersections in the area with higher collision rates in the review period, we didn’t support the construction of a roundabout due to insufficient technical justification and minimal collision history.”

Following this accident, public works staff from both counties requested a comprehensive update of accident data from the OPP. Public works and police met to discuss the collision history and details of accidents that would be susceptible to relief from alternative intersection control. At this intersection, the accident frequency is 1.75 per year.

At the Nov. 10 Wellington County Roads committee, staff presented a recommendation to proceed with the trial of temporary traffic signals at the S-bend intersection.

Wellington County staff has also recommended installation of temporary traffic signals at the Wellington Road 18 and 26 and the Parker intersection.

It is anticipated the installation of the signal system at the S-bend would begin immediately at a cost of $120,000 ($60,000 from each county). The Perth County portion will be funded through the Capital Roads Reserve.

North Perth deputy mayor Doug Kellum, said the issue has been on ongoing concern for many years.

“I know all council of North Perth and especially the mayor have fielded many phone calls and emails, especially over the last year.”

Perth East Mayor Rhonda Ehgoetz, said traffic lights would be a great compromise to solve the traffic problems at the intersection. She indicated she hopes the temporary lights could become permanent instead of installing a roundabout.

After stating his support for the installation of temporary traffic signals, South Perth Mayor Bob Wilhelm, said he would like to see a comprehensive list of intersections and accidents on both county roads and the lower-tier municipalities.

“The lower tiers have some roads that probably have more accidents and higher fatalities than this intersection,” he said.

“So this might be temporary but maybe we have to look at the bigger picture and how many intersections do we have to do this work on to try to save lives.”

McClelland said one thing many municipalities, including Perth County, lack is a master transportation plan.

“We need something in place where we can deal with situations like this and have policies and procedures in place,” he said.

Warden James Aitchison, deputy mayor of Perth South, said there was conversation throughout the summer about the possibility of an all-way stop, but he said some of the workers in the roads department felt if stop signs aren’t working now, adding two more won’t help much.

“(McClelland) asked me my opinion and I said I think the stop lights might be better,” he said. “They are going to (be run by) traffic (sensors) because one way has far heavier traffic than the other way, so it won’t be flipping back and forth all the time.”

Colin Burrowes is a Local Journalism Initiative Reporter with Midwestern Newspapers. The initiative is funded by the Government of Canada.