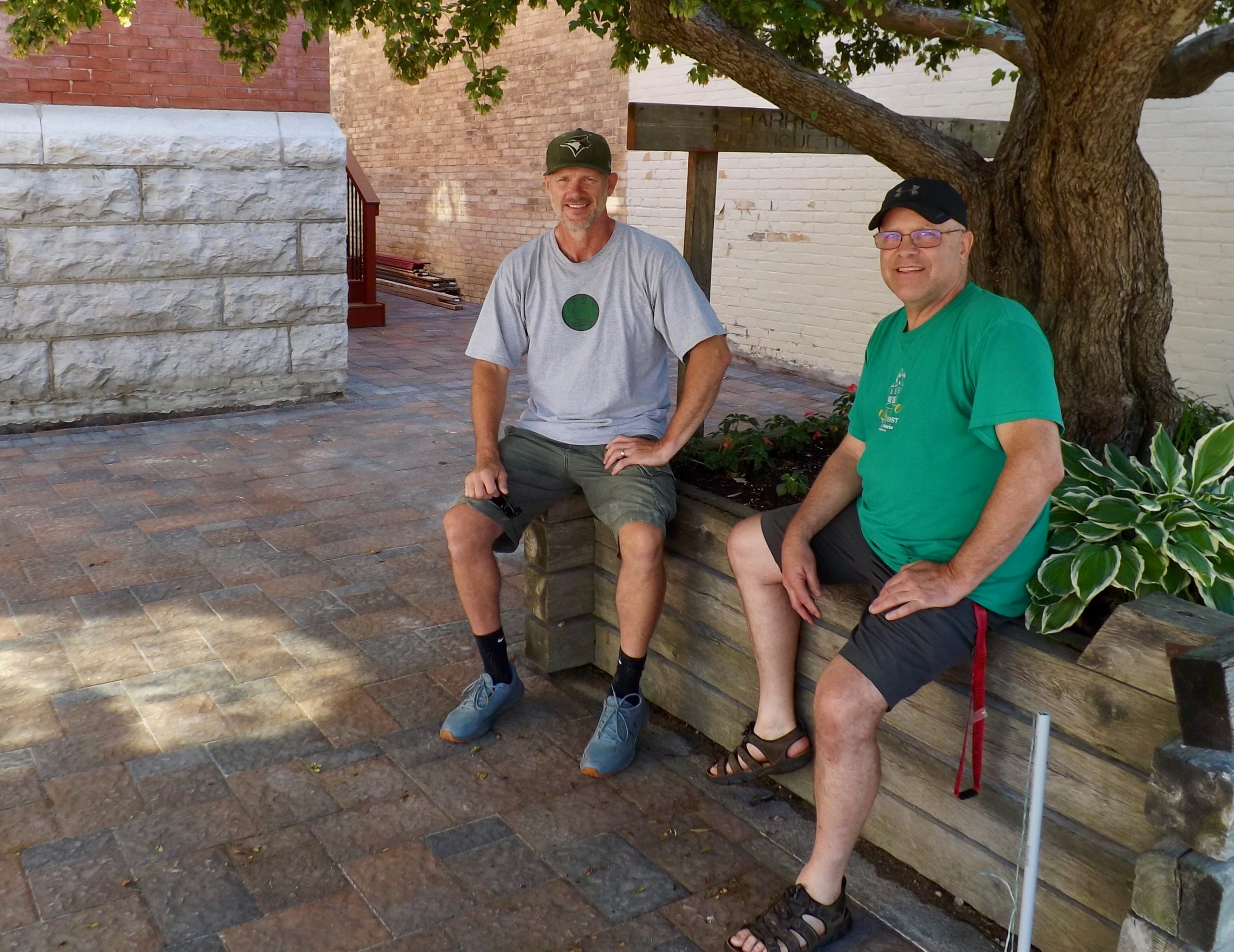 Tony Hale, left, and Michael Hendrick are gearing up for the opening of the Old Post Cafe, which will offer street-side treats from the Elora Street Courtyard of Harriston's former post office building. Photo by Patrick Raftis

HARRISTON – Street-side treats will soon be available from The Old Post Café here.

The Elora Street establishment will also be licensed, serving beer and wine both inside and at an outdoor courtyard.

Soft ice cream will be available both in the café and through a take-out window off the courtyard area, which features all new stonework replacing the original concrete.

Seating in the courtyard at the front of the building will be largely shaded by a unique Amur maple tree.

“The tree is really a centrepiece for the courtyard. It will be well lit. We’re having bench seats on three sides, including a public bench facing the street,” said Old Post owner Michael Hendrick. 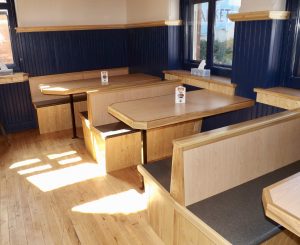 The Old Post Cafe features handcrafted wooden booths in a seating are designed to be adapted to physical distancing spacing as required. Photos by Patrick Raftis

Interior and exterior renovations were coordinated by local craftsman Tony Hale, who has been involved in the restoration of the Old Post since it was purchase by Michael and Sue Hendrick in 2015.

Food served at the Old Post Café will have a local flavour, with much of the baking done by Sue Hendrick and Tony’s wife, Krista Hale.

“We’re trying to make a lot of local products that would really appeal to community people,” said Michael.

Tony notes the new venture ties together the various enterprises already operating at the Old Post, including an escape room in the attic/bell tower area and Postscript, a commercial kitchen and event space operation in the basement.

Baking and soups will come out of the Postscript kitchen, while the space also serves as an additional seating area for café customers.

“It’s also tied into the café, so you can come here and enjoy your coffee and take it downstairs and have more of a private hangout with your friends and enjoy the space that way,” said Michael.

Tony points out the café is launching at an opportune time, as Wellington County moves into phase three of the province’s COVID-19 reopening plan.

“Now that phase three is open its crazy how everything is starting to come together,” he said, noting the relaxed restrictions will also allow for reopening of the escape room in the building.

The escape room operation, Escape the Old Post, will eventually be expanded with the addition of a second facility downstairs.

There are also long range plans to extend the courtyard area around to the back of the building.

It’s all part of what Michael calls “the old post experience.” 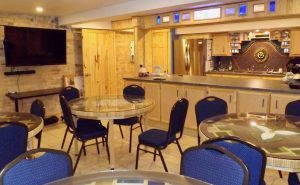 “It’s got different branches, but it’s all kind of one thing.”

He noted employees can be deployed between the various elements of the business.

For now, however, the plans are to start slowly, under the direction of newly hired manager Krista Leask, beginning with ice cream service July 18.

Lunch service will start July 27, with the café initially operating from 10am to 2pm.

Michael said the goal is to have the café operate from 7am to 3pm, then reopen in the evening for “ice cream, coffee and drink experiences” from 6 to 9pm.