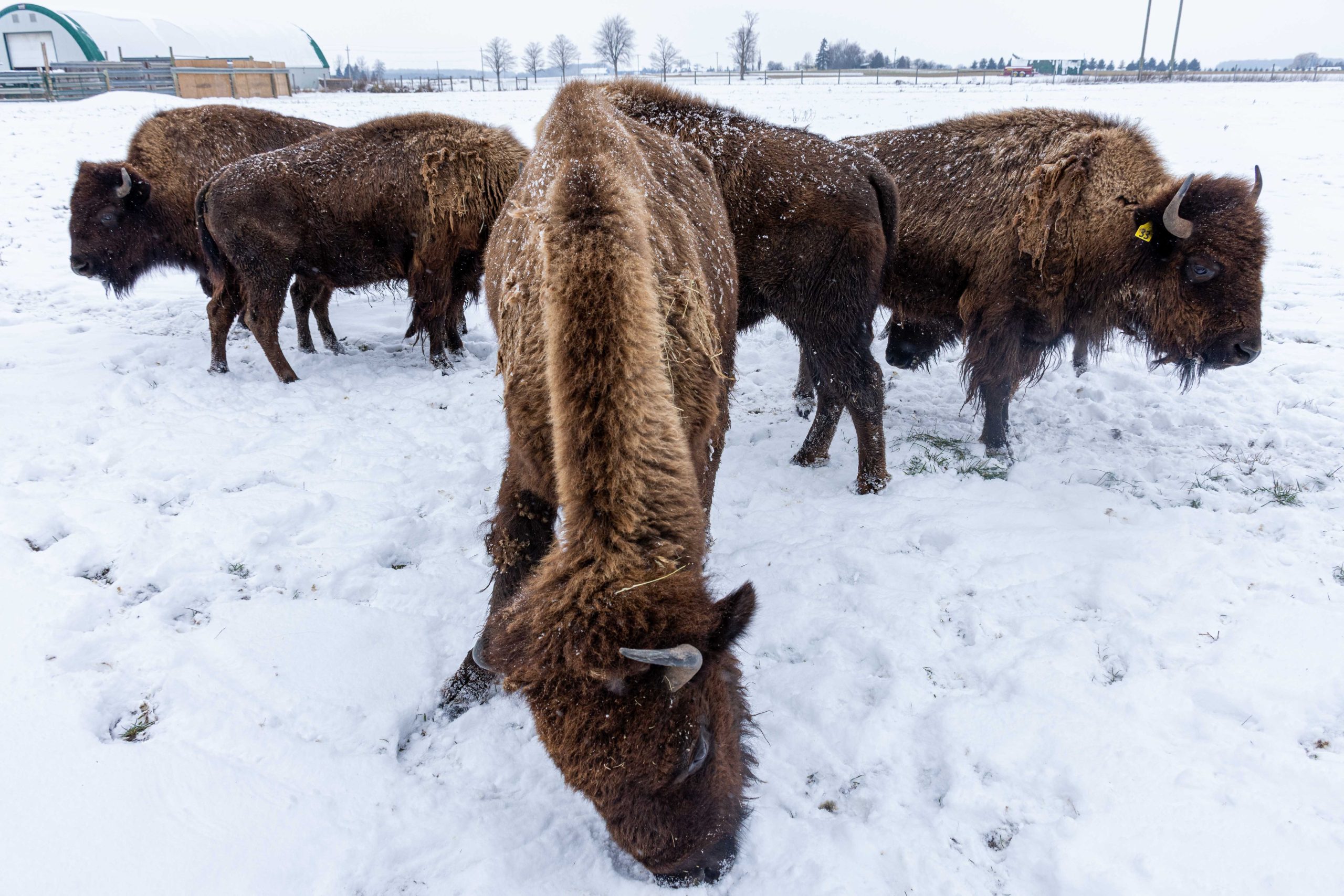 MAPLETON – Followed by an energetic dog by the name of Trigger, Amanda and Shane Stege walk between conifer trees, peeling back their needly, overlapping branches.

Beyond the evergreen curtain stands a herd of hefty bison – also called buffalo – their breath cloudy in the December air.

The bison belong to the Steges, who own and operate Northwind Bison on their Mapleton farm property.

Raising North America’s largest land mammal is a rare form of agriculture, not only in Wellington County, but the province at large with around 30 bison operations registered with the Ontario Bison Association and 49 Ontario farms reporting bison in a 2016 Canadian Bison Association census.

Standing upwards of six feet tall and weighing nearly a tonne (2,000 pounds) when fully grown, Northwind’s bison are visible from Concession Road 8. But it’s another thing altogether to be up close.

The Steges toss the herd sliced apples that might as well be peace offerings.

Moving cautiously around the wild-minded animals as they keep a watchful eye, the Steges know the gentle giants could, in a matter of a second, charge and close the few feet between them. 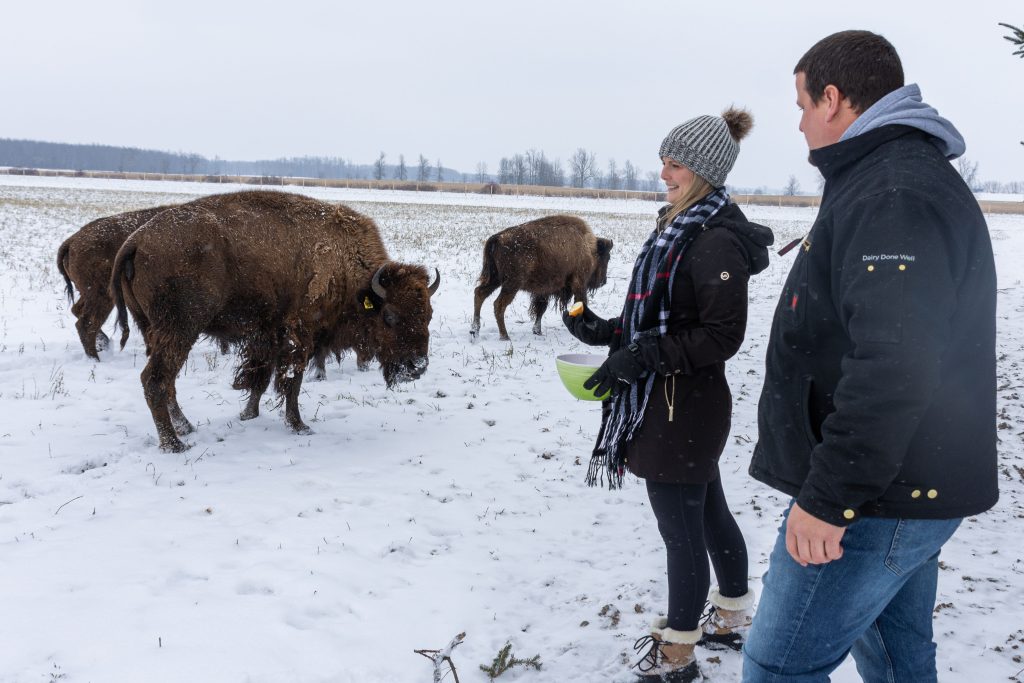 The Steges separately grew up in farming families but hadn’t felt what Amanda called a “burning desire” to farm.

Shane became a tool machinist and Amanda a dental hygienist.

But those born into agriculture have it in their blood, Amanda said, and the couple soon enough felt a desire to return to their roots.

Living in Drayton and working in their respective trades, Shane at Norwell Dairy and Amanda at Palmerston Dental, the conversations about getting into farming began cropping up.

“I was used to the country, loved the country life, you’re out in the open more, you’re not surrounded by people,” Shane said.

In 2012, the couple made their foray with an already-established poultry operation run by Amanda’s father, John Ottens, under the Snetto Farms banner.

Three years later, in 2015, the Steges took over the poultry operation, purchasing the 100-acre farm from Amanda’s family.

“He came home and said, ‘you know what would be neat? To get into bison,’ and I told him, ‘you’re crazy,’” Amanda said.

“It was one of those things that we kind of mentioned and talked about and laughed about … but it’s something I just couldn’t [let go],” Shane said.

Amanda was drawn by bison meats’ nutrient makeup: a lean red meat, low in cholesterol, and saturated fat, and still providing much of the nutrient value found in similar red meats, like that of beef cattle.

Following a meeting with the Ontario Bison Association in 2018, the couple were “hooked.”

Two pasture lots were fenced off and the Steges purchased their first four female and two male bison from a Waterford-area breeder the following year. 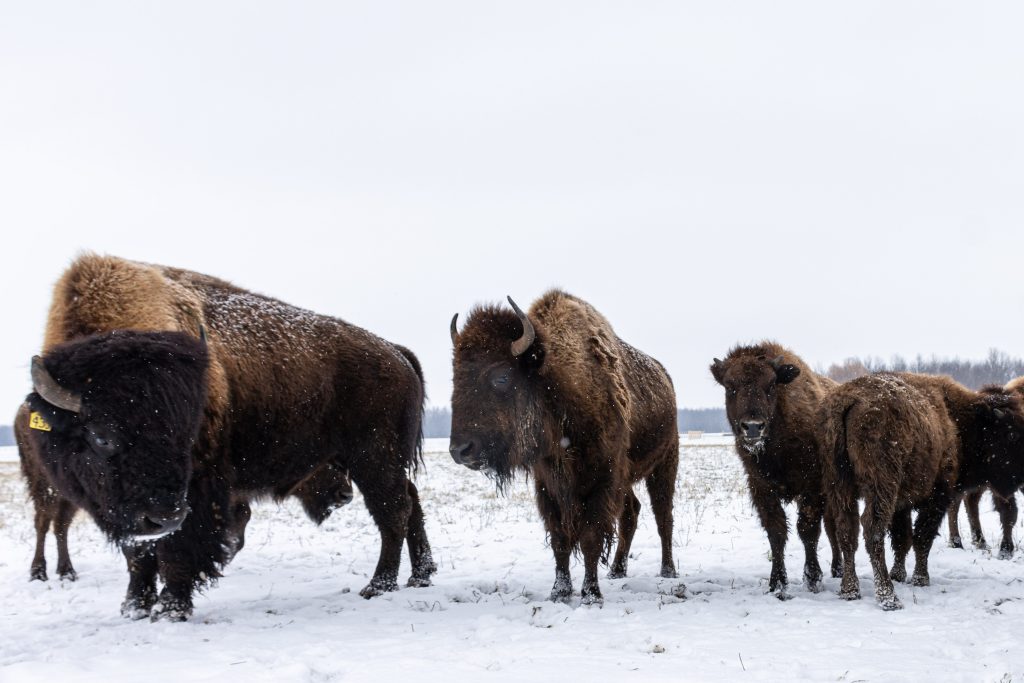 A herd of bison at Northwind Bison in Mapleton. (Photo by Jordan Snobelen)

“We would go sit out there and just watch them, it was kind of relaxing to come home to and go feed ‘em and bale ‘em and just sit there and watch them for 20 minutes – they’re addicting, I guess you could say,” Shane explained of his fascination with the animals.

“They could be such a powerful animal at any moment but when you see them in the field, they’re calm, they’re peaceful.”

“When they do get close, it’s almost like a hold-your-breath moment,” Amanda remarked.

“You feel that power while you’re there,” said Shane.

One of the top questions the couple gets is why bison don’t have barns.

“These are some of the happiest days they have, where it’s cold,” Shane explained.

“They’re the same as they were a hundred years ago.”

Seeing bison coated in snow isn’t a bad thing either, he said.

It means the animals’ thick coat is doing its job of insulating. If it wasn’t, the snow would melt from the bison’s escaping body heat. 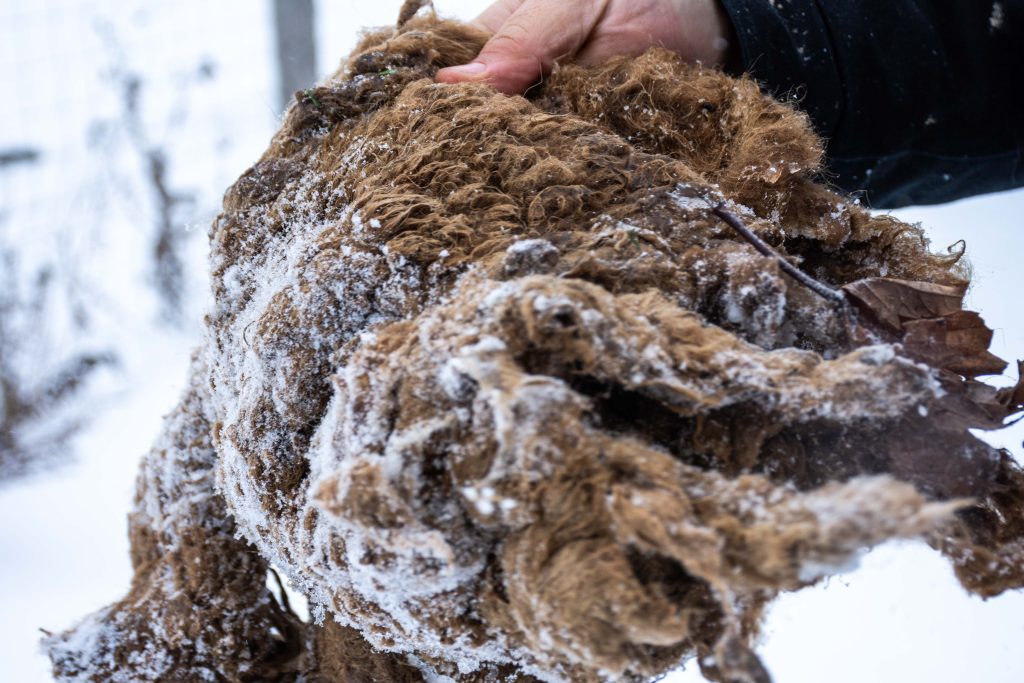 The bovines are low-maintenance and independent. Compared to similar red meat animals, like beef cattle, the bison only require space, pasture, dried hay, water and a molasses “mineral lick” to be content.

Otherwise, they’re left to roam, breed and calve on their own, and bring few health concerns.

The Steges said a vet has only made a visit to the farm once in the past three years.

Because bison require little human intervention and live naturally on the land, the species lends itself well to conversations around animal husbandry and regenerative agriculture practises.

“As the younger generations are coming up, they question things more, they want to know: ‘Where does my food come from?’” Shane said, adding the best farm policy is openness and transparency.

Amanda said, as farmers, it’s “wise to acknowledge those conversations and not pretend that they’re not happening” and said there’s plenty of room for both conventional and modern agricultural practices, pointing out that Northwind is a happy combination of both, with larger poultry and niche bison production.

At around 1,100 pounds, bison reach market weight and yield upwards of 400 pounds in cuts. 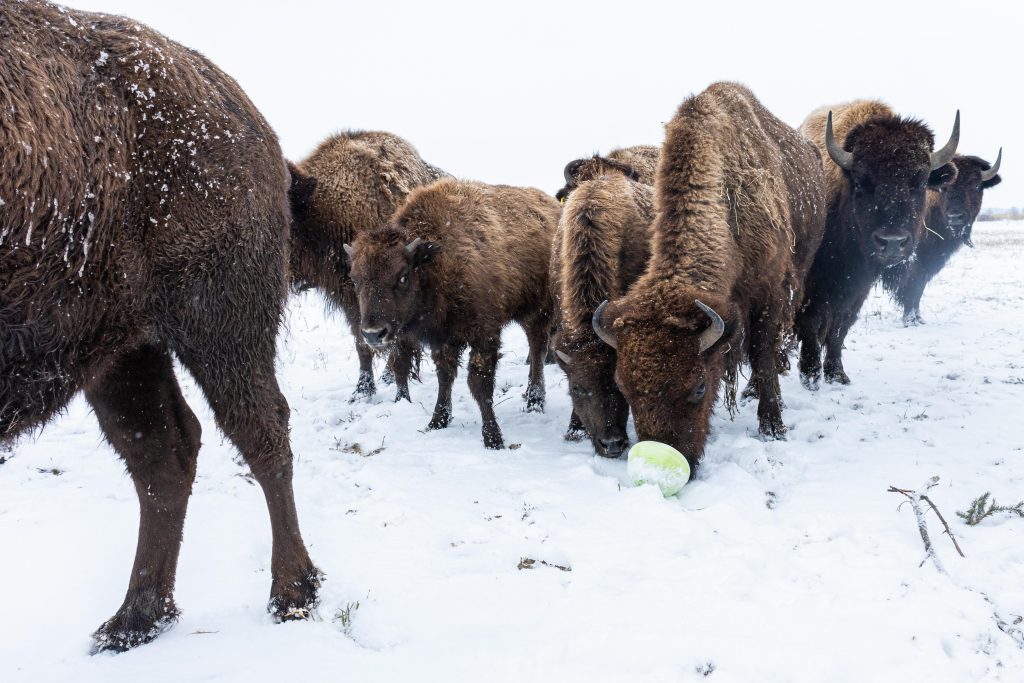 Northwind’s customers range from the health-conscious, to people just looking to try something different.

“There’s more talk about bison, there’s more, I guess you could say ‘hype’ about it,” Shane said.

They’ve had inquiries from local restaurants wanting to add bison to their menu but are still growing their herd to respond to the interest the farm has generated.

The couple continues to work full-time jobs off the farm, while farming evenings and weekends.

Farming full-time, Shane said, would be more realistic as an early-retirement dream once their three children – aged five, eight and 10 – have grown.

Amanda believes it’s almost necessary for younger farmers to have an off-farm income these days. Although the farm income sustains the farm itself, it doesn’t cover the cost of living, she explained.

“To live, we need to work,” she remarked. And when the work is finally done, Amanda and Shane can be found peering in admiration at their growing herd.

Nearly rendered extinct over 100 years ago, they now range through the Steges’ backyard as though a 19th century painting of the Great Plains were brought to life.