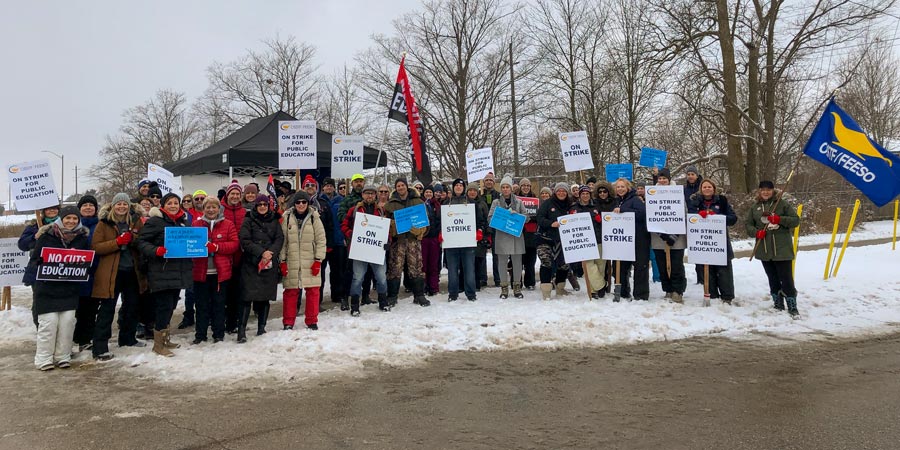 WELLINGTON COUNTY – The OSSTF has announced another partial one-day strike next week, but no schools in Wellington County will be impacted.

Ten school boards will participate in the Dec. 18 strike, most in northern Ontario and the Waterloo, York and Halton regions.

On the same day, OSSTF (Ontario Secondary School Teachers’ Federation) members in other school boards will hold information pickets in front of schools, at MPPs’ offices and other locations.

The one-day strike follows similar action in select areas on Dec. 11, as well as a one-day province-wide walkout on Dec. 4 and a limited withdrawal of services starting on Nov. 26.

The latter will continue across the province.

“Since our last bargaining date on [Dec. 3], we have seen no change in the Minister of Education’s agenda of increasing class sizes, forcing e-learning on our high school students, and continuing the funding cuts that take valuable support staff and services out of our schools,” stated OSSTF President Harvey Bischof in a press release.

Recent statements from education minister Stephen Lecce suggest the union is more interested in higher wages for its members.

“We are calling on OSSTF to cease from continued job action, accept our offer of private mediation, stay at the table, and focus on improving learning in the classroom, not enhancing compensation for their members,” Lecce stated on Dec. 13, just hours after the OSSTF announced its latest strike action.

The province and the union are scheduled to meet with a mediator on Dec. 16 and 17.