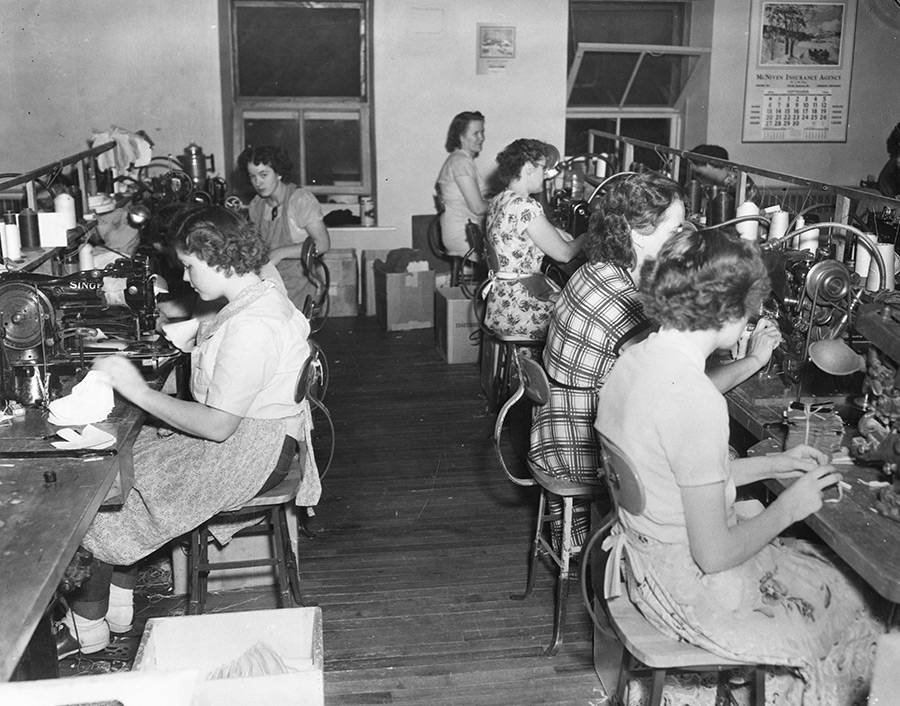 Shoe workers – Women working at banks of sewing machines on the second floor of the original Savage Shoe factory, located in the former Carriage Works building, at the corner of Union and St. David Streets in Fergus, 1951. The operations moved to a new purpose-built factory in 1954. [Wellington County Museum & Archives, ph 9655]

The Beatty Brothers firm totally dominated the economy of Fergus in the 1940s.

The firm had brought prosperity to the town, but also caused some anxiety and a sense of vulnerability.

Consequently, Fergus council and the local chamber of commerce wished to diversify, and attract a handful of smaller industries to the municipality. They achieved some success in 1947, when the Savage Shoe Co. of Preston decided to come to town.

There was much pent-up demand for consumer items after the war years, and especially so for the Savage firm, which specialized in infant and children’s footwear, lines much in demand as the postwar baby boom got under way. The firm had orders which could not be filled by the capacity of its three existing plants.

Initially, the Fergus operation was a makeshift one. Savage rented the second floor of the large stone building at the corner of St. David and Union Streets. The structure had been used by its owner, Jack Tweddle, as an auxiliary facility for his prosperous chick hatchery.

Employing mostly women, some of whom had been Beatty employees during the war, the Savage operations at Fergus consisted largely of sewing together the upper parts of baby shoes, which were then returned to Preston for final assembly.

Those facilities were cramped and awkward. By 1952, with demand stronger than ever, the Savage firm decided to set up a permanent branch plant, possibly in Fergus. The chamber of commerce, with W.A. Maedel as president and Jack Tweddle as head of its industrial committee, held many meetings with Savage executives through 1953.

At first, the firm wanted only a larger rental property, but nothing suitable was available in Fergus, nor likely to be in the foreseeable future.

The firm also scouted towns to the north such as Mount Forest and Harriston, but they offered a much smaller labour pool, and increased transportation costs to the existing factories and head office in Preston. Eventually, Savage executives realized they would need to build. The firm wanted serviced land within town, and assurances that housing would be available for employees.

C.R. Kidner of Savage Shoes met with Fergus council during the early months of 1954. By then, rumours were rife that the firm had some big plans. One story had the firm building in Elmira. Others had Savage rebuilding the burned-out Mill Street Mundell Furniture factory in Elora, or taking over the sprawling Fleury-Bissell plant in Elora, which had recently closed.

Kidner made the announcement on March 22: Savage Shoes would stay in Fergus, and would build a modern one-storey plant on Woodside Street, bordering Perry and Black Streets. Campbell Richardson owned the land. It had once been part of the Beatty Bros. experimental farm. The firm purchased a plot of 2.5 acres in size, and planned a factory covering about 15,000 square feet. Construction would begin at once, with occupancy in late fall of 1954. The site offered plenty of room for future expansion.

The existing rented quarters employed about 65 people, and turned out 1,200 pairs of upper shoe parts daily. The new plant would gradually build up to a payroll of 150, most of whom would be women in the sewing department.

Housing was in short supply in 1954, and the firm’s intention to hire married women for the majority of the new positions promised the advantages of a new industry without further pressure on the Fergus housing supply.

The Savage Shoe Company, in 1954, was a newer firm, though already the largest manufacturer of children’s shoes in Canada. The firm’s founder, Laurence M. Savage, was a Maritimer whose father was an executive with the Hartt Boot and Shoe Co. in Fredericton, but the family later moved to Ontario. His father later purchased the Parker-Steel Shoe Co. in Preston.

In 1927, at the age of 27, Laurence Savage took over the business on the death of his father. Subsequently, he purchased other small local operations: Hurlbut Shoe Co. Ltd. of Preston in 1934, and Wragge Shoe Co. of Galt in 1937. He amalgamated the three firms as the Savage Shoe Co. later that year.

The opening of the Fergus operation, in 1947, marked the beginning of a phase of postwar expansion. Laurence Savage bought out Charles A. Ahrens Ltd. of Kitchener in 1949, and the Lashbrook Shoe Co. of Preston in 1951. With the latter, Savage became one of the major players in the Canadian shoe industry, and the national leader in children’s footwear. In 1954 the firm produced up to 10,000 pairs of shoes daily, and sales topped the $7-million mark.

Worked progressed smoothly and rapidly on the new factory. The final design was for a 13,000 square foot facility, a little smaller than first announced, in a typical 1950s factory style: flat roof, concrete and brick construction, and large areas of multi-pane windows in the sidewalls.

On Sept. 27, about five weeks before the employees were scheduled to move to the new facility, an announcement startled both Fergus and the Canadian shoe industry: Laurence Savage was selling the firm to the International Shoe Company, headquartered in St. Louis, but incorporated in Delaware, where the legal climate toward business firms was more accommodating.

International Shoe dwarfed the Savage firm by a large margin. As well as its main plant in St. Louis, occupying two huge 10-storey buildings, International operated 56 branch plants, many in small towns, seven tanneries, two rubber plants, and a textile mill. It owned several companies producing components for its shoes. In 1953, International produced 55 million pairs of shoes and boots, and had a gross income of roughly $250 million, making it the dominant firm in the American shoe industry.

The usual assurances that there would be no changes in management did not calm everyone, but it soon was apparent that International Shoe executives were content to leave most decisions to the former Savage executives. The new subsidiary would retain the Savage name and have its own board of directors, consisting of three former Savage men and three Americans.

Laurence Savage remained as chairman and president of the subsidiary, with additional duties as vice-president of International Shoe. He continued to head the Savage Shoe division of International until his retirement in 1965. In addition, he served as a director of nine other firms, including the Toronto-Dominion Bank and Union Gas.

The sale of Savage Shoe offered access to expansion capital, efficient production machinery, and new styles and designs of shoes. Work on the finishing touches at the new Fergus plant continued uninterrupted. Employees transferred to the new facility in late November 1954, a little behind schedule, but in time to vacate the old cramped, drafty and cold quarters before the worst of winter.

Fergus citizens took some pride as the year 1954 neared its end. They had gained a factory that fit in well with the small town atmosphere of their community, providing diversification and employment. It was certainly better than Elora, which lost its leading industry to bankruptcy, and had another crippled by a major fire.

The Savage Shoe factory, despite occasional layoffs, prospered through the 1950s and 1960s. An expansion in 1958 doubled the size of the plant. At its peak, employment hovered at the 200 mark, and production topped 3,000 pairs daily.

Increasing quantities of cheap imported shoes had a major impact on Savage Shoe’s production beginning in the 1970s. The imports put downward pressure on wages, and tempted management to cut quality in order to compete. By 1983 the Fergus plant operated at less than half its capacity, and the prospects for the future looked increasingly bleak.

Soon the firm concentrated all its production in Cambridge, and closed the Fergus plant. Some hoped the closure would be temporary, but by then Savage, and most of the Canadian footwear industry, was doomed. Few were surprised on June 10, 1989, when the bailiff, on behalf of unpaid creditors, tacked a bankruptcy notice on the door. By then, Savage Shoe employed only 60 people.

Fifty years ago, the footwear industry employed hundreds of people in Kitchener, Galt, Preston and Hespeler. There were 16 firms in the business in addition to Savage Shoe, giving Waterloo County the second highest concentration of footwear manufacturing in Canada, exceeded only by Montreal.

Savage Shoe’s Fergus plant was a geographic extension of that cluster. In 1954, everyone believed that those factories were a solid part of the economy, and would churn out their products forever, providing good industrial jobs in the process.

A lot has changed in the course of a half century.

*This column was originally published in the Wellington Advertiser on June 25, 2004.