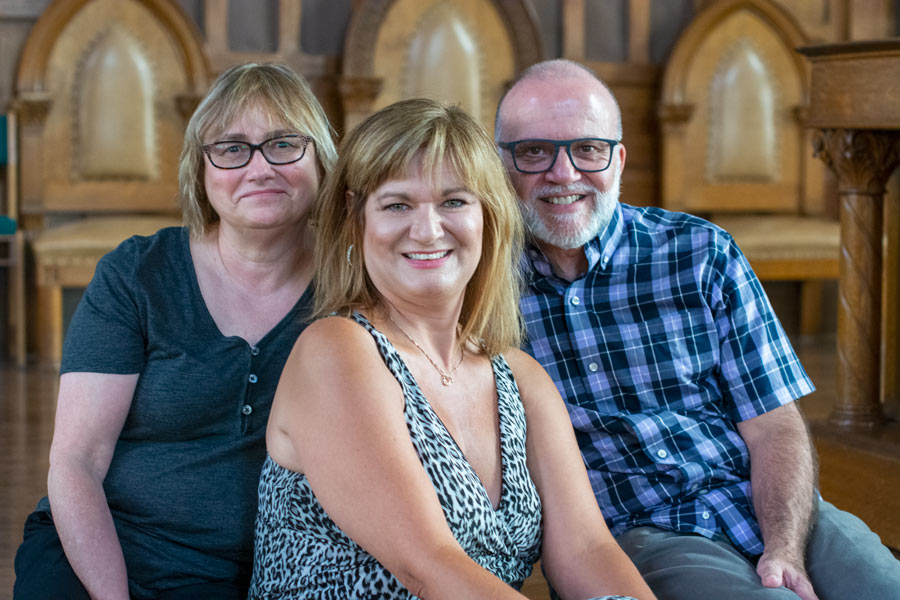 Theatre - Centre Wellington Theatre Productions is on track to present its inaugural play, Charlotte’s Web, this fall. Organizers, from left, Denise Gismondi, Jennifer Milne and Simon Leibovitz started the company as another option for the growing Centre Wellington community.
Photo by Jaime Myslik

Centre Wellington Theatre Productions has officially cast its inaugural show, Charlotte’s Web, which will be on stage this fall.

The infant company is in good hands, with co-founders Denise Gismondi, Simon Leibovitz, and Jennifer Milne having about 125 years of combined theatre experience.

The organizers have done everything from directing, acting and producing to everything in between, with area theatre groups since they were youths.

They felt it was time for another community theatre group in Centre Wellington.

“It’s very surreal because we’ve been talking about it for … a couple of years for sure and it just doesn’t happen overnight,” Milne said.

The group chose its name to reflect its motto: “branching out.”

“There’s nothing that’s got the actual amalgamated name (Centre Wellington); its all-encompassing, which is what we want to be and we want to reach out to everybody from Fergus, Elora, Elmira, Arthur, Guelph.”

Leibovitz said the group hopes that in a few years it has blended into the community.

“[There’s a] rich history of theatre in this community and we want to be part of it,” he said.

The group is based out of Melville United Church in Fergus, where it will rehearse and ultimately perform each show. The group has created a collaborative agreement with the church.

The church will receive a portion of ticket sales and, in return, the group doesn’t pay any rent for the space.

Centre Wellington Theatre Productions isn’t looking to compete with other community theatre groups in the area.

“It’s to be another company; more opportunities because the community is growing,” Leibovitz said.

Gismondi said the group will be another option for those looking to partake in community theatre and hopefully it will offer something that appeals to everyone in the community.

“If they’re offering a season say with one theatre that … doesn’t look like there’s any roles for that particular person or it’s not something that they want to get involved in, they go looking elsewhere,” Gismondi said.

The group is planning to have a production in the spring and fall.

Charlotte’s Web will be on stage at Melville United Church this fall. Milne, who is directing the show, said cast members range in age from 9 to 64.

“It’s a really nice mixture,” she said. “I believe there are six kids and about nine adults.”

Milne also pointed out there is a variety of experience among the cast.

The organizers will direct the first few shows, just to get the group off the ground, but then they’re hoping to entice others to direct.

“It won’t just be us directing,” Milne said. “It’s not going to be that kind of a closed group by any means.”

Now that its first show is cast, Centre Wellington Theatre Productions is looking for people to serve as assistant stage managers and  set builders, and to help with lighting, sound and publicity.

There are also sponsorship opportunities available for local businesses.

For more information or to get involved email cwtprod@gmail.com.