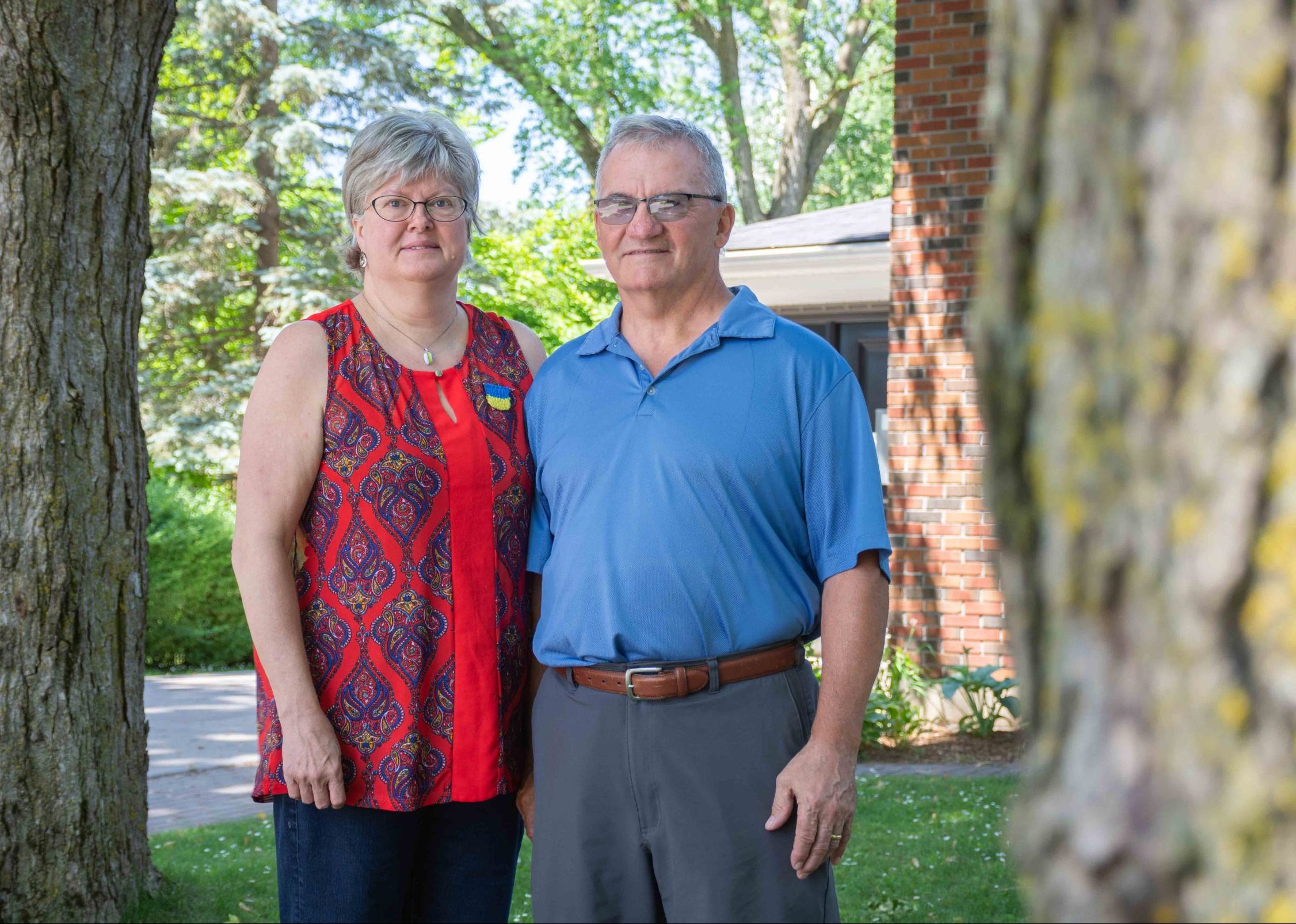 Lene and Frank MacLean have volunteered to open their doors to provide temporary housing for any Ukranian refugees who want to resettle in Mount Forest. Lene is also nearing a $10,000 fundraising goal with money directed to Lions Clubs International to aid Lions Clubs in Ukraine. Photo by Jordan Snobelen

MOUNT FOREST –  It all started with a sweet, braided babka cake.

“Ukraine was invaded and I thought, ‘Oh, we have to do something,’” Lene MacLean said, recounting her drive to kickstart a fundraiser for Ukraine at the Mount Forest United Church.

Russia’s attack on the sovereign country and its people resonated with MacLean, who grew up with stories of her Polish godparents fleeing the Nazis and ending up in Denmark.

Community members from within, and outside of, the church came together to support MacLean’s mission.

“We’re just a group of ladies who want to make a difference,” MacLean said.

MacLean wanted to route the money through an organization with little overhead and fast delivery and Lions Clubs International seemed to fit the bill.

All money raised by MacLean goes to the local Mount Forest Lions Club and from there to Lions International and to Lions Clubs in Ukraine. 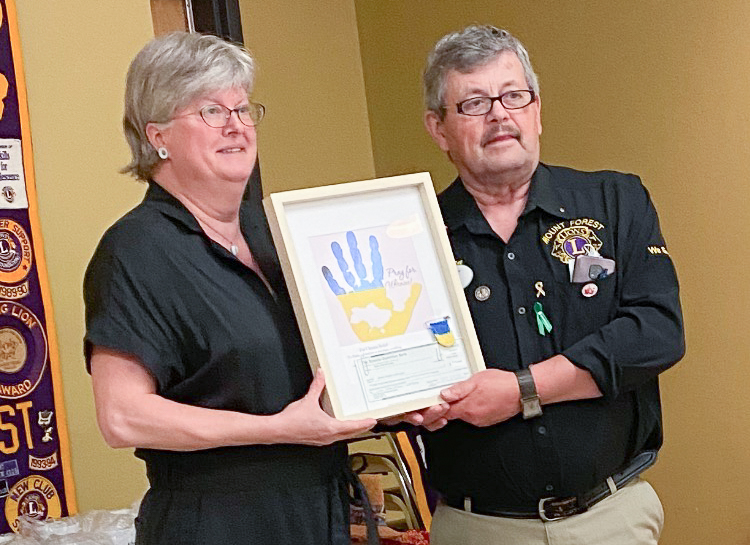 But the focus isn’t the money.

MacLean doesn’t want people looking away from Ukraine’s plight and an ongoing war without an end in sight.

Around 200 people, MacLean estimates, have helped grow the grassroots charge into a full-fledged response – either through donations, knitting, baking, artwork, or volunteering.

Each Sunday since March 20 (when the babka cake was cut) MacLean has held a Ukraine-themed event of some sort to generate donations:

Basic clothing, hygiene items, and other supplies such as walkers and air casts, have been donated as well.

They have been delivered by Barbara Waite and MacLean to Gezaghn (Geza) Wordofa, who heads the Stratford-based Multicultural Association of Perth Huron, and is working to get relief supplies shipped to Ukraine and get refugees to Wellington County and surrounding areas.

“We have outfitted probably 200 men and about 150 women with care packages,” MacLean said.

“The generosity and kindness of people is absolutely brilliant in this town.”

The generosity and kindness doesn’t end there.

The MacLeans, reportedly along with at least five other Mount Forest couples, have expressed interest in opening their doors to Ukrainian refugees, should any come to the county.

The Advertiser spoke with Wordofa via Zoom while he visited the Ukrainian organization Green Roads on April 21, where goods are being sent from Warsaw, Poland and into Ukraine via trains to Odessa and Kyiv, and then out to villages through a network of drivers organized over the Telegram messenger app.

Wordofa is making flights to Poland and helping displaced individuals and families navigate emergency travel measures  – aimed at expediting travel to Canada for Ukrainian nationals and announced by the feds in March – before booking plane tickets to Canada. 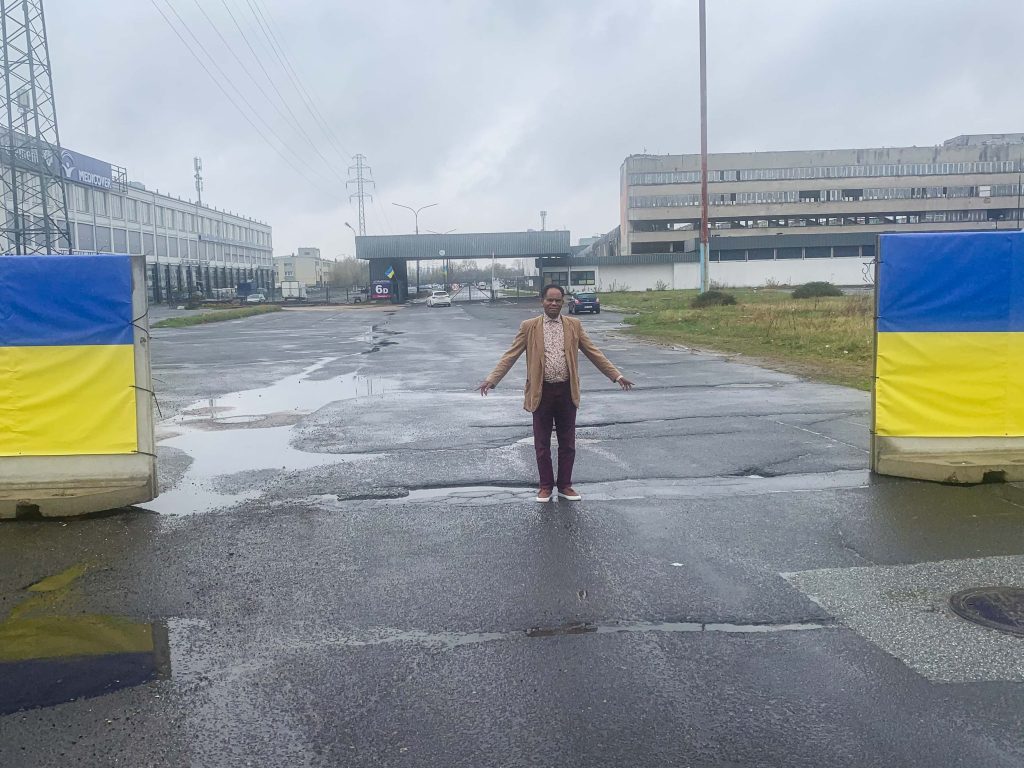 Gezaghn (Geza) Wordofa poses for a photo in the Masovian Voivodeship in Warsaw, Poland. Submitted photo

Emergency travel measures and a temporary resident visa allow for Ukrainian nationals to live, work and study in Canada for three years.

According to the Canadian government, there were 312,548 applications received between March 17 and June 15. Less than half (136,877) have been approved.

Some refugees have already arrived in Perth and Huron counties, according to Wordofa, but none in Wellington.

Wordofa hopes to resettle 42 Ukrainian families within the county, but needs more people who are willing to open their doors.

As of June 20, Wordofa said he has 12 homes available for refugees in Perth and Wellington counties, five of which are located in Mount Forest.

Five families are ready to board a plane to come to Mount Forest, Wordofa said, but they need plane tickets, with prices ranging between $1,000 and $2,000 per person.

He anticipates being able to bring two families to north Wellington within the next three months. 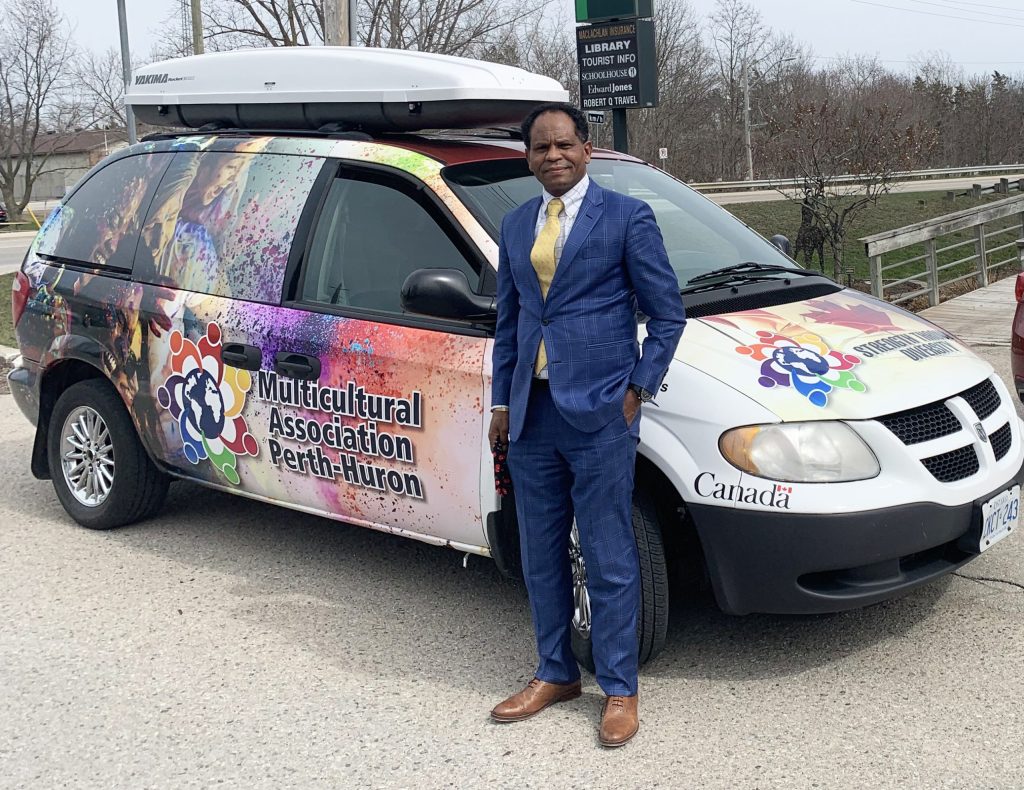 Gezaghn (Geza) Wordofa, who heads the Multicultural Association of Perth Huron, and is working to get relief supplies shipped to Ukraine and refugees to Wellington County and surrounding areas. Submitted photo

At the MacLeans’ home, the basement has been converted to host an entire family, and the couple have offered to take any youth, aged 12 to 20, who are coming to Canada without parents.

Opening a home to complete strangers may seem a daunting proposal, but MacLean believes people are fundamentally kind and caring.

“Shyness and fear are what stops most,” she said, adding, “there is nothing to be scared of.

“This is an opportunity to enrich your life, especially if you’ve always lived in the same little neck of the woods – it’s your way to reach out to the global world.”

Should Ukrainian refugees eventually arrive in Mount Forest, a network of people have stepped up to provide options for clothing, furniture, food and language services, to help refugees land on their feet, one step and one day at a time.

MacLean once questioned how well foreigners would be received in Wellington North, but those doubts have since abated following the resettlement, by the Mount Forest United Church, of families from Myanmar and Rwanda, several years ago.

Those refugees, MacLean said, have since gained footholds in Canada and are self-sufficient and thriving.

“I think the whole Mount Forest community did a phenomenal job raising them up,” she said.

For more information on how to assist with McLean’s fundraiser, or to lend a hand, email fmaclean@wightman.ca.

For those interested in providing temporary housing to Ukrainian refugees, visit maph.ca.