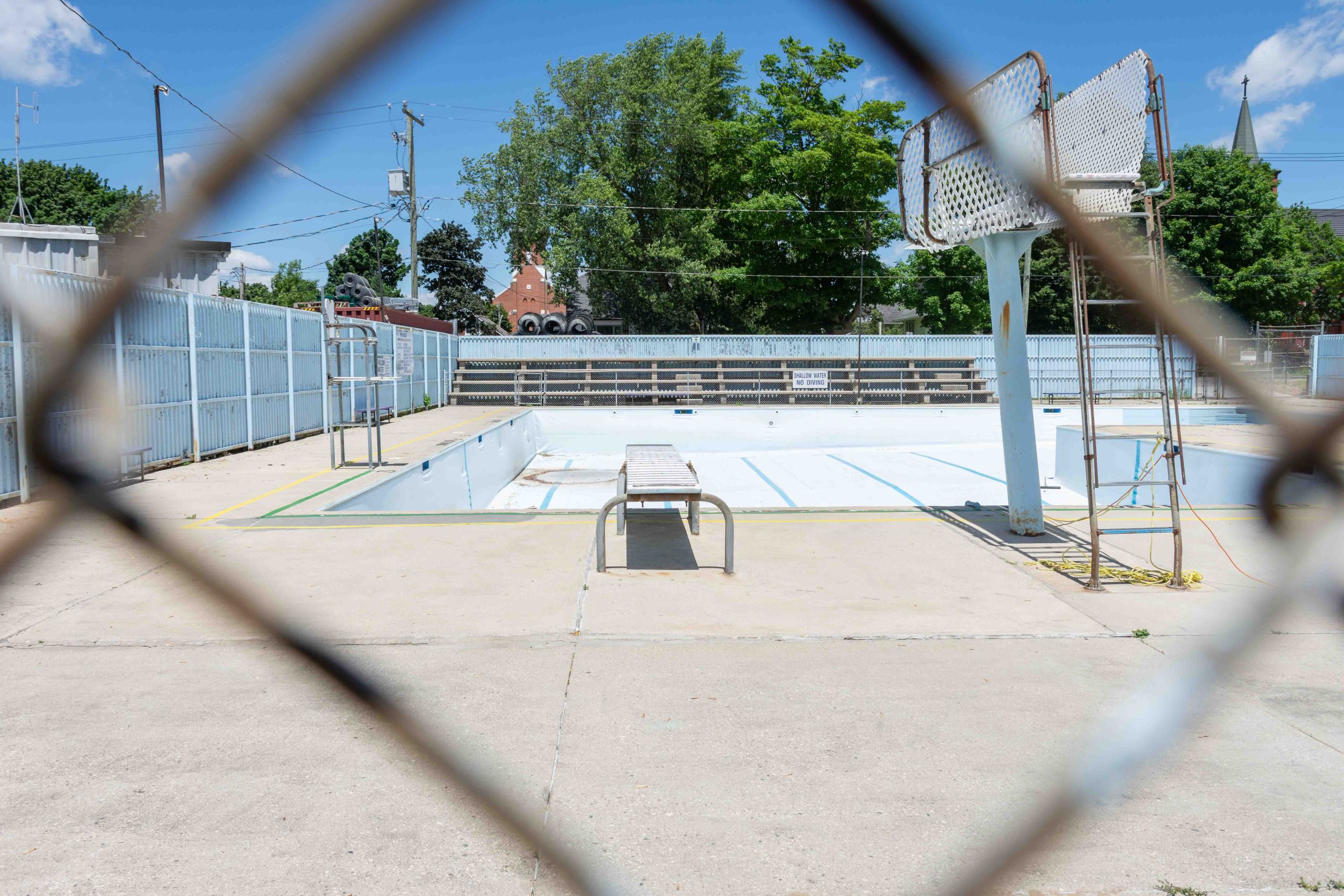 The Lion Roy Grant outdoor pool in Mount Forest will remain dry this summer following a June 17 decision by Wellington North council not to repair the pool's liner. Photo by Jordan Snobelen

WELLINGTON NORTH – Summer officially arrives on June 21, but Mount Forest residents won’t have a chance to cool off in the Lion Roy Grant pool this season, or likely ever again.

Before a drop of fresh water was poured for the season, council declared the pool closed following a June 17 special meeting.

The unanimous decision not to open the pool follows a verbal report, given on June 7 to the township’s parks, recreation and leisure committee, about a discovery made during an inspection the same day by Wellington-Dufferin-Guelph Public Health.

“The verbal report indicated the pool liner in the deep end had failed and would need to be replaced in order for the pool to be opened for the 2022 season, at a cost of $170,000 plus applicable taxes,” states a report from interim township CAO and operations director Matthew Aston. 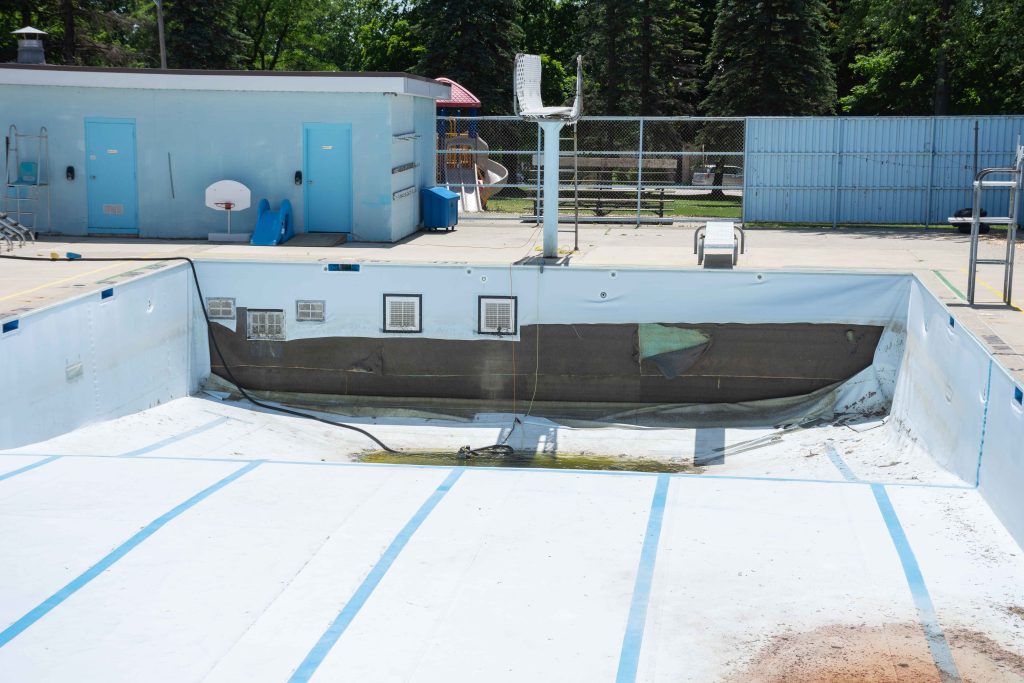 A June 7 inspection by Wellington-Dufferin-Guelph Public Health found the pool liner at the Lion Roy Grant Pool was in disrepair and an inspection report advised against opening the pool until repairs, estimated to cost around $170,000, had been completed. Wellington North council voted in favour of not repairing the pool and instead putting money toward plans for a new outdoor pool in Mount Forest. Photo by Jordan Snobelen

The circulation system didn’t pass because prior inspections have revealed problems with “return skimmers” in the pool’s shallow end.

For an inspector to grant a pass this time around, the township would need to prove the pool’s entire water volume is “turned over” four times in a 24-hour period.

The inspector’s report noted observations of “large folds and creases” in the pool liner which was said to be “pulled away from [the] wall” with “large air gaps behind [the] liner and wall.”

The inspector also noted the “potential for entrapment of [feet] or hands in folds of [the] pool liner” and stated there were “reported leaks throughout the surface area of the pool.”

The inspector also stated the pool deck was “observed to have continuing larger gaps on the deck, indicating potential shifting of pool structure.”

In bold font, the inspector’s report advises against opening the pool until a structural assessment of the pool is completed.


On June 9, Ozzie Di Carlo, a civil engineer with Triton Engineering Services, had a look at the pool and stated in a report to the township: “there were no significant problems with the structural integrity of the [deep end] wall. There were no cracks, differential settlement, spalling or any other significant form of concrete delamination or degradation observed.”

Di Carlo did however note a “full inspection requires that the existing liner and felt back be removed entirely.”

Following a full inspection of the concrete structure, recommendations for any repairs needed could then be made before a new liner was installed.

Di Carlo also suggested recaulking to lessen surface water penetration into the backfill of the wall.

Liner repairs and pool testing, at an estimated pre-tax cost of around $190,000, would take at least a month to complete before swimmers could enter at the end of July, or in August, according to Aston’s report.

Mayor Andy Lennox reiterated: “If we’re not prepared to fix it now, why would we change our mind for [the] future?”

“I am in favour of unfortunately, I guess, of closing it this year,” councillor Steve McCabe said.

“I don’t think it makes sense to spend good money after an issue like this and only have it open for about, or not even, a month.”

Council passed the recommendations and the Lion Roy Grant pool will remain closed for the season. 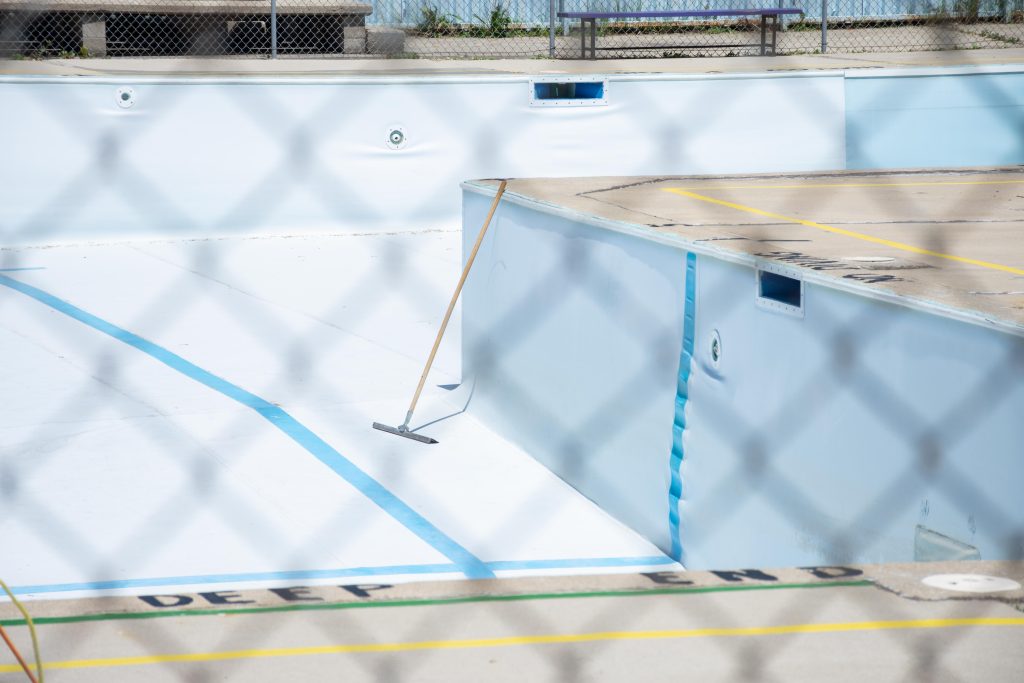 The empty Lion Roy Grant pool in Mount Forest is pictured through a chain-link fence. The pool will remain closed for the 2022 swim season following the discovery of a torn pool liner. Photo by Jordan Snobelen

The pool’s present state of disrepair and council’s decision to forego spending on repairs in favour of putting dollars toward a new outdoor pool in the future affects at least 74 individuals who had signed up for swimming lessons, and around 75 daily users.

It also means the township will lose revenue from the pool totalling an average of around $43,985 based on reported revenue between 2015 and 2019.

But without the pool operating, the township also won’t be spending an average of $77,290 per year that it takes to operate the pool.

According to community recreation coordinator Mandy Jones, some Mount Forest families have registered for lessons at the Arthur pool with the first lessons set to begin June 20 and ending July 15.

Because there is a limit to how many people can be in the pool at any given time (a lifeguard-to-bather ratio is outlined in provincial law) swim times at the Arthur pool have been split, based on staff recommendation, in the hope of allowing more swimmers to cycle through the pool.

Instead of a single, two-hour public swim on Saturdays, there are now two, single-hour swims in the afternoon from 1 to 2pm and 2 to 3pm. For a complete swim and programming schedule, visit Arthur pool schedule or view the schedule embedded below.

Council also discussed offering transportation, and covering the cost, to get Mount Forest residents and children to the Arthur pool, but the item requires more discussion and no concrete decisions were made during the June 17 meeting.