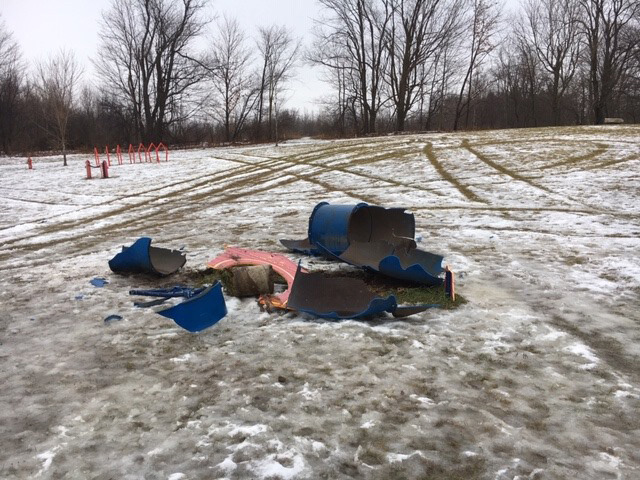 FERGUS - On Dec. 9 Wellington County OPP responded to a report of mischief at the dog park on Glengarry Crescent in Fergus.
Photo by CW Dog Park

FERGUS – Volunteers at the dog park here say they are “heartbroken” by the “mindless destruction” caused when someone drove a vehicle into the park and performed “donuts.”

On Dec. 9 at about 9:15am Wellington County OPP responded to a report of mischief that occurred sometime on the weekend at the Fergus dog park on Glengarry Crescent.

“Friday night someone entered the park with what appears to be a large vehicle and raced around the park doing donuts in the snow and running over one of our honeysuckle bushes,” states a post from the CWDOG/Fergus Dog Park Facebook page.

“The vandals returned the following night and completely destroyed the tunnel which is part of our agility area, along with several small trees we planted last spring.”

Police say the damage may be valued at more than $5,000 and are asking anyone with video surveillance to report any suspicious activity to police or Crime Stoppers.

“The dog park community is (a) furry warm family and we are heart broken at this mindless destruction,” states the dog park Facebook page.

“As volunteers we raise money every year to add benches, agility equipment, trees and more to the park so it is very disheartening to have this happen”.

The group hopes to convince Centre Wellington officials to install barriers at the park “to avoid this happening again.”

Anyone wishing to help the park replace the equipment, bush and trees can make donations at the Fergus sportsplex information desk. Officials say receipts are provided for donations over $25.