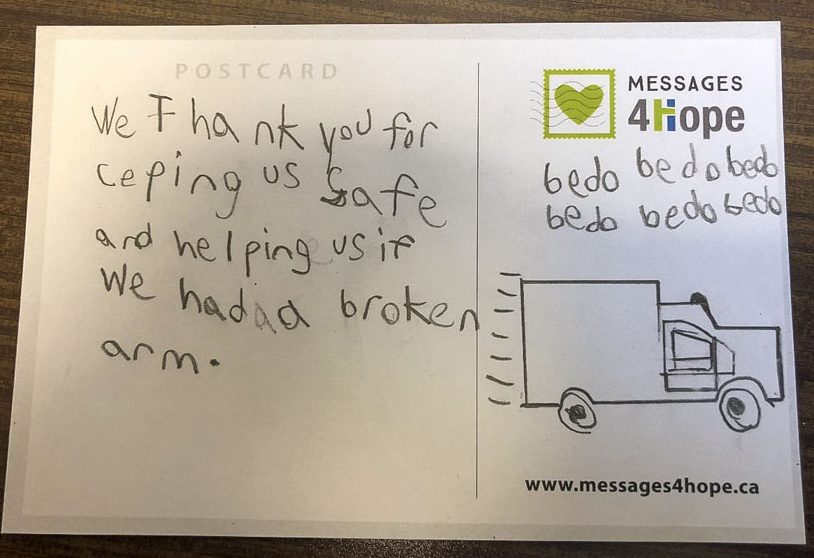 Elementary students across Wellington County participated in the recent Messages4Hope campaign. Here is a postcard that one student wrote for an essential worker. Submitted photo

The campaign ran from Oct. 19 to 28 and allowed the Wellington County community to connect in a COVID-19-safe way – through paper or virtual postcards.

The Here4Hope project, aimed at promoting life and preventing suicide, annually includes an autumn event to provide updates and a learning opportunity for local residents.

This year, Here4Hope ran the Messages4Hope campaign instead, due to the COVID-19 pandemic.

“The postcards and social media campaign did just that.

“The campaign visuals that focused on hope, encouragement, gratitude, and support were seen online by more than 38,000 people and shared, liked and posted more than 5,800 times.”

One post asking community members what they’re grateful for garnered about 200 comments.

There were also 2,000 digital messages sent in workplaces.

In addition, 46,000 postcards were printed and shared with community members in the Wellington Advertiser.

Yet it’s impossible to count how many were sent because each individual was responsible for mailing or hand delivering their message to someone else within the community.

Another campaign highlight, Roberts said, was the number of people who watched videos posted of seniors at the Wellington Terrace Long-Term Care Home in Aboyne.

“Those videos alone were viewed over 1,000 times; just those videos from the Terrace, which I think is really lovely considering it was our seniors,” Roberts said.

The campaign also reached into Wellington County schools, with 2,000 postcards going to high schools for the students to keep or pass on as they wished and 2,000 going to elementary schools, where students were asked to send messages to essential workers.

“We got 1,500 postcards back from elementary students, sending wishes and messages to essential workers that were sent back out to the community,” Roberts said.

They were delivered not only to hospitals, family health teams, EMS, police, firefighters and nursing homes, but also to stores like Home Hardware and Foodland.

“We really tried to be intentional with them and send them to maybe some folks that didn’t get so much recognition,” Roberts said.

The Messages4Hope campaign seemed to do what the organizers hoped it would: inspire some action.

“People saw and agreed that reaching out is important and we used this campaign to do that,” she said.

“So we hope that we inspired them and that it will continue to inspire them.”

And to help, Here4Hope is keeping the Messages4Hope website active so the community can keep sending messages whenever they wish.

As an added bonus, there will also be some holiday messages added to the Messages4Hope page in mid-December, Roberts said.

“This was really just the jumping off point to show the power of connection between people and how much one small message from someone can really create some hope and some good feelings and [the community] proved that,” Roberts said.