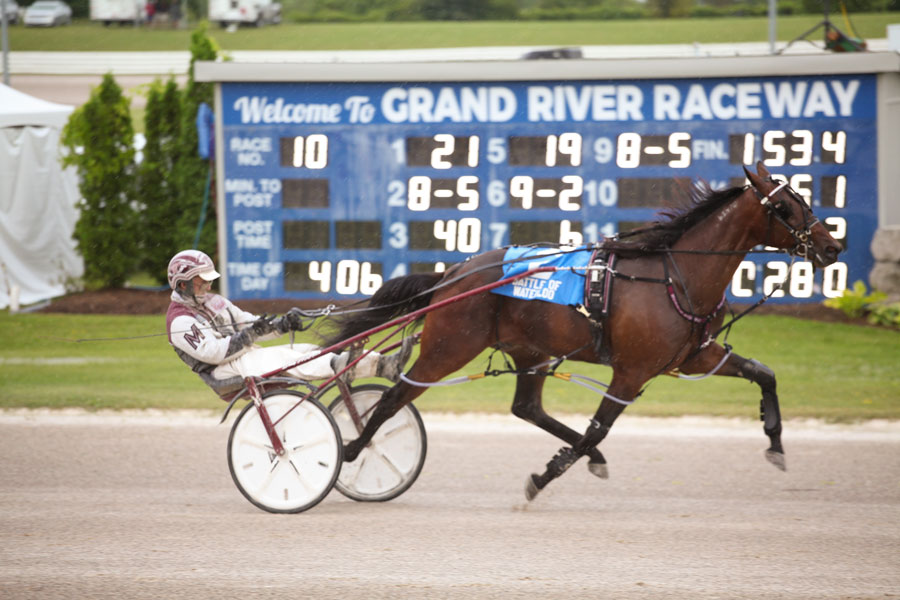 At 8-5, Bettor Sun was the co-favourite heading into post time for the $200,964 contest for rookie Ontario-sired pacing colts.

Trained by Gregg McNair for breeder/owner Willow Oak Ranch, the Sunshine Beach colt was piloted by Doug McNair, who left from post two and took control of the field by the half-mile marker. The pair finished a length ahead of Avion Seelster (Jody Jamieson) and Cantstoplying (Jonathan Drury).

Bettor Sun bested his own record with a clocking of 1:53.4 in the Battle of Waterloo.

Battle Of The Belles 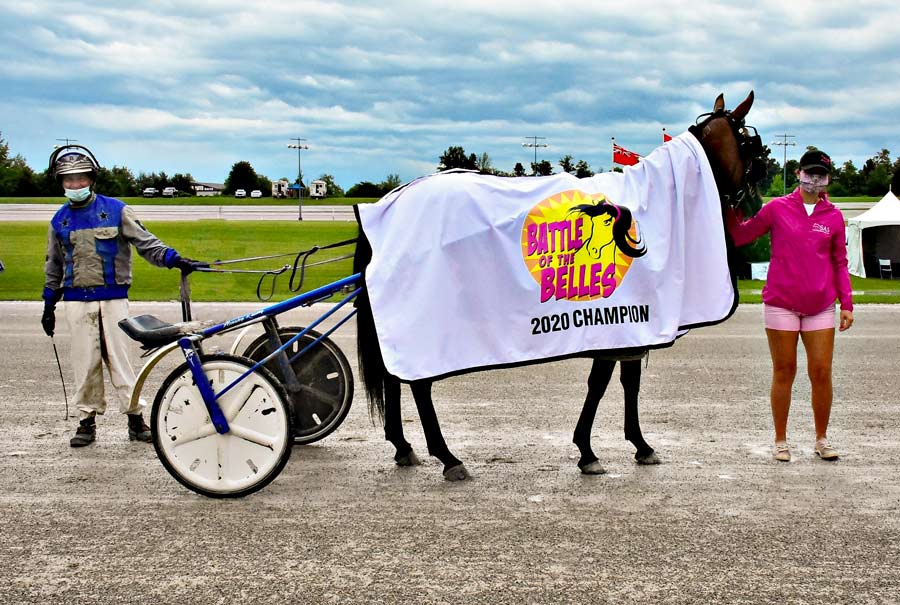 Scarlett Hanover and driver Ed Hensley left from the second tier and carved out a solid pocket trip to take the $128,149 Battle Of The Belles final in a new stakes record of 1:54.3. The mile also set a Canadian season record for rookie pacing fillies over a half-mile track and just missed the divisional track record by one-fifth of a second.

Ring Of Kerry was the runner-up with Sylvain Filion and Cyclone Seelster was close behind in third with Bob McClure.

Last year’s Battle Of The Belles champ, Karma Seelster was an impressive winner in the first Gold Series division which kicked off the matinee program.

Piloted by Doug McNair, the Sportswriter filly was 7-1 as she took to the front of the field early in the mile en route to clocking her 1:53 victory (just one-fifth of a second off the track record). Owned by Eileen and Keith Waples and Karen Hauver, the Gregg McNair trainee is a career winner of five races and $354,005.

Lauras Love took the second Gold Series division in 1:54.2 with a half-length advantage over Rose Run Vantage (Sylvain Filion). It was the second consecutive win for Lauras Love, and seventh of the season (11 starts).

Race favourite Kat captured her first season win in the first of five OSS Grassroots divisions (Race 2) for trainer James Dean. With Jody Jamieson in the bike, the pair took control of the field at the first quarter and staved off outside attackers at the final quarter, with a half-length score in 1:56.

Free Flyin Ticket scored her second consecutive OSS Grassroots victory in Race 3. Paul MacDonell steered the Betterthancheddar filly to a three-length win in 1:54.1, elevating her to the top of the OSS division standings.

Bettorthanbobbie added another win to her collection, with a half-length score in Race 5. Sylvain Filion steered the bettors’ top choice to her sixth season win in 1:54.4 for trainer Marcel Barrieau and owner Ian Smith.

The final Grassroots division was the quickest, claimed by Preeminence, winning by open lengths with Bob McClure in the bike in a new career best of 1:54.

The card’s only overnight race was a $15,000 Preferred in Race 4. Pretty Handsome claimed his 27th career win in 1:55. Sent off at 3-1 with Colin Kelly aboard, the five-year-old pacer began his attack in the final quarter.