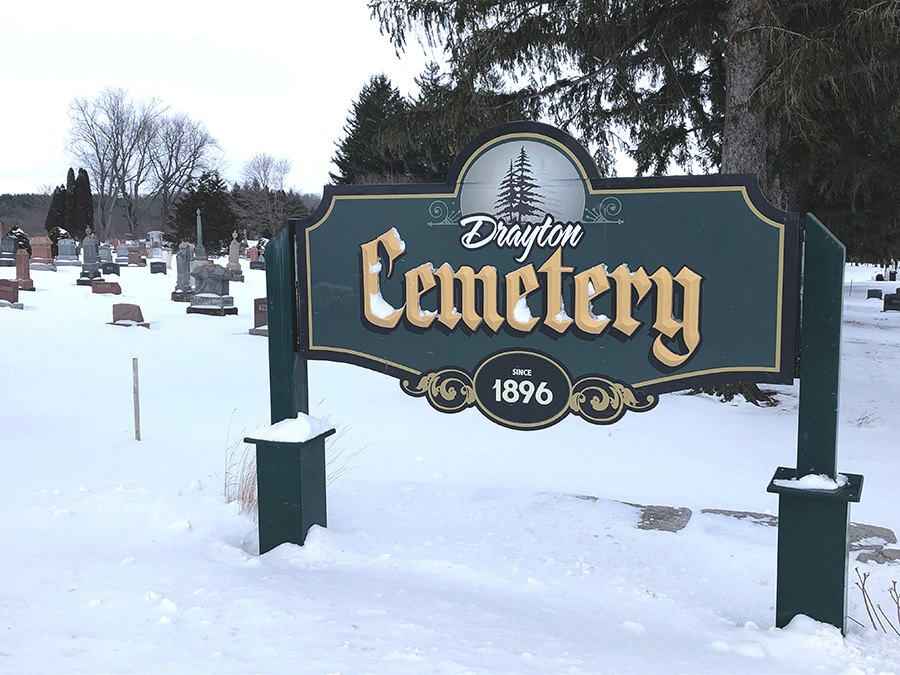 Mapleton council has agreed to raise interment fees at township-operated cemeteries by 10 per cent annually to help build up the care and maintenance funds. Photo by Patrick Raftis

MAPLETON – The township will increase interment fees in municipally-operated cemeteries by 10 per cent a year in order to make up for a long-standing shortfall in care and maintenance charges.

The decision was made at the Jan. 26 meeting, after council backed away from an earlier staff recommendation that would have seen current fees rise dramatically.

The township owns two cemeteries: Drayton Cemetery outside of Drayton and Hollen Cemetery just outside Hollen.

“I would like to start by saying we are not opposed to increases happening … However, these proposed increases are most certainly unreasonable,” Thompson said at the time.

An updated report presented by Morrison at the Jan. 26 meeting states, “In consultation with the community, it was felt that a phased approach with respect to the sale of interment rights should be undertaken.”

Morrison noted the need to come up with an equitable formula to cover provincially-mandated care and maintenance funds is an “inter-generational” issue.

Legislation stipulates cemetery operators must contribute 40% of plot sales to the fund with the intent that interest from the fund covers all future costs for care and maintenance while the initial sum is held in trust.

Unfortunately, Morriston notes in the report, Mapleton’s interment fees have been “historically low,” leading to a shortfall in funding.

“This is a problem that predates all of us. It was a problem well before any one of us were born and it’s a difficult problem to solve,” he told council on Jan. 26.

The aim, he said, is to “develop a mathematical formula for the correct pricing as we move forward in time, to try to make sure we can build the care and maintenance fund so it can actually provide greater contributions to the cemetery operations because currently it’s providing very little.”

Morrison explained the gap in funding will take time through the proposed phased approach.

“Ten years to phase this in and probably a hundred years to create the problem in the first place, so it’s not something were going to be able to solve overnight,” he said.

Morrison estimated that in recent years taxpayers have been providing about $37,000 a year toward care and maintenance services that should be covered by the mandatory fund.

“I don’t dispute that we have to raise our fees to some level, because I don’t think it’s been done in the past on a regular basis,” said councillor Marlene Ottens.

“But it’s my understanding that the care and maintenance of a cemetery, when you have this in perpetuity, is that they are assuming that the cemetery at one point will close so there’s no more income coming into it … But our cemetery is not going to close anytime in the future. We’re going to just keep expanding it.”

“There’s nothing stopping us from using the money now to offset the operations for the taxpayer… it’s just not practical to do so because we’re collecting the money so slowly for the sales.”

Councillor Dennis Craven asked if the rates could be increased even more gradually than the proposed 10% annual increase.

“Would it be more practical to look for a two per cent increase?” he asked.

“You’re just putting it off. The fees have to go up,” said Morrison. “If we don’t start increasing the fees in a rational way, I’m not sure you’re going to be able to make your master plan come to life.”

Mayor Gregg Davidson said, “Probably had this been done over the years before us we wouldn’t be in a position now where we have to raise the fees.”

Davidson reminded council the 10% figure was arrived at after reconsideration of the much higher proposed increases.

“I agree with Mr. Morrison that the 10 per cent per year is prudent at this point and that comparators will catch up to us, or us to them,” said Ottens.

Council received the report and approved the proposed changes to the fees and charges bylaw schedule.