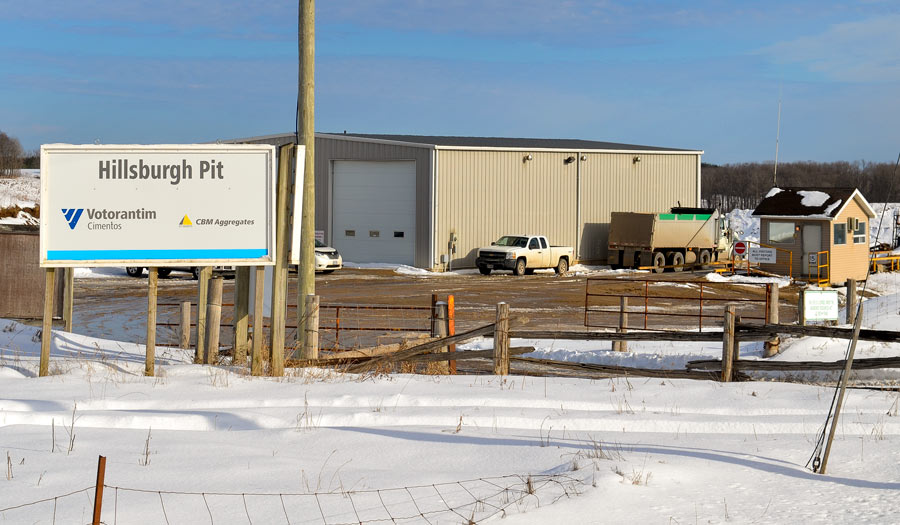 Improvements - The settlement that will allow the CBM pit extension to proceed includes turning lanes to be added at the Trafalgar Road entrance.
Photo by Phil Gravelle

ERIN – The Local Planning Appeal Tribunal (LPAT) has endorsed an agreement to permit the expansion of the CBM St. Marys gravel pit on prime farmland north of Hillsburgh.

On Feb. 10, tribunal member Chantelle Bryson approved amendments to the Erin and Wellington County official plans and the Erin zoning bylaw, and directed the Minister of Natural Resources and Forestry to issue an aggregate licence.

Bryson heard uncontested evidence from CBM that the project, which will eventually more than double the pit area but not increase the annual extraction volume, meets all of the provincial and municipal aggregate requirements.

The expansion had been opposed by the Concerned Citizens of Erin (CCE) group, but it agreed to a settlement that includes a citizen liaison committee, which will meet annually to review pit operations with a representative of CBM. Town and county councils may send a representative.

According to the minutes of settlement released by CCE, gravel trucks will continue to use the Trafalgar Road entrance to the pit, which will have new turning lanes. The 8th Line will no longer be considered an alternate haul route, and the entrance on that road will be used only for farm access and berm maintenance.

Phase one is a two-acre area, below the water table, just south of the existing pit. Phases two and three are to the north, totalling about 135 acres, with extraction down to 1.5 metres above the water table, between Trafalgar Road and 8th Line.

The maximum “disturbed” area of land at any one time for the combined old and new pit areas is 74 acres. CBM is obligated to eventually restore most of the land to agricultural use.

CBM first applied for the expansion in 2011 and it has been the subject of various studies, open house sessions and public meetings.

Traffic and noise studies were updated in 2016, and there has been a process of peer review required by the town and county.

The pit generates traffic of up to 16 trucks per hour at peak times, and accounts for 4.6 per cent of the traffic through Hillsburgh.

CBM has sponsored a radar sign near the village reminding all drivers to respect the 40km/h speed limit.

As part of the LPAT settlement, CBM has agreed to the following hours of operation on the extension lands.

Shipping and loading can take place from 6am to 6pm Monday to Friday (formerly until 7pm), and 6am to 12 noon on Saturdays.

Operation of machinery will be allowed from 7am to 6pm on weekdays, but aggregate crushing and screening will not normally take place on Saturdays.

The pit will not operate on Sundays and statutory holidays, except when emergency deliveries are required.