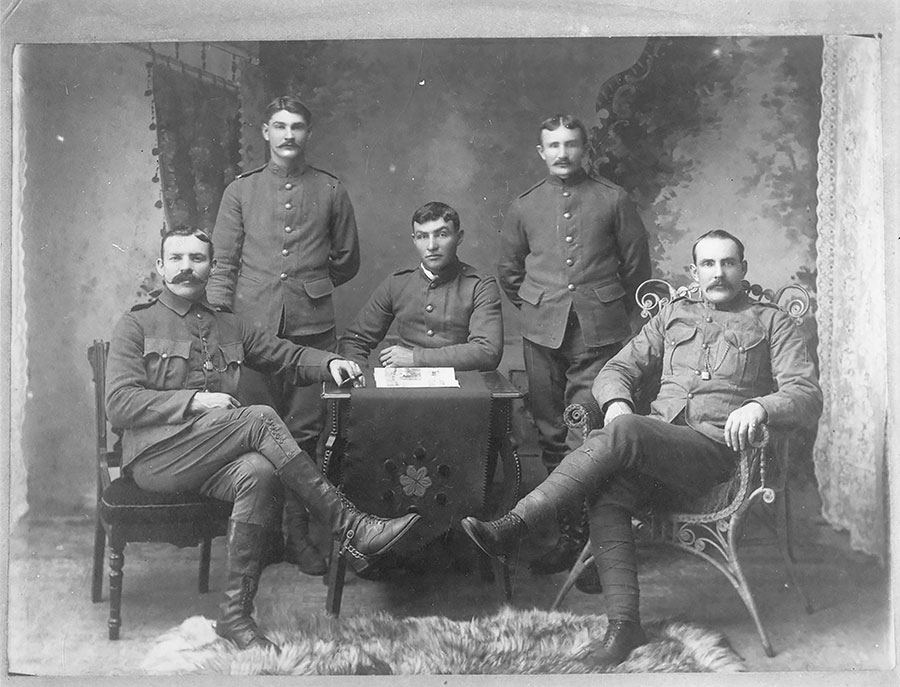 Elora’s South African veterans – This photograph, taken in January 1901, shows five of the returned soldiers who had local connections. The local men are James Wells, W.J.A. Campbell, Tom Bryans, Robert Barrett and Trooper Walch. Seated at the centre, Walch had an uncle in Pilkington. Before the war he had been with the North West Mounted Police in the west. It seems that waxed moustaches were part of the uniform for these men. This photo apparently was prepared and sold as a souvenir. I know of six copies, two of which are at the Wellington County Museum. No doubt there are many others. Wellington County Museum & Archives, photo 6286

This past Nov. 11 I did not notice a mention of the Boer War in the Remembrance Day services, or in either the print or broadcast media.

It seems to be slipping from our collective memory. I am old enough to remember when the Boer (or South African) War figured largely in Remembrance Day observances, and when a grizzled old veteran would sometimes be a guest of honour.

Last week I became curious about the local involvement in this war, which lasted officially from the summer of 1899 to May 1902.

To my knowledge, no one has assembled a list of Wellington County participants, though one could easily be prepared from surviving military records. I was interested not only in those who enlisted, but in the public attitudes to the war as far as these can be determined from the distance of a century.

The Boer War was merely a chapter in a long history of territorial disputes in southern Africa. The Boers, descendants of Dutch settlers, had set up the Republic of the Transvaal. In the 1890s, discoveries of minerals in the republic brought a flood of immigrants, mostly from England, who soon outnumbered the Boers. The Transvaal government of Paul Kruger refused to grant them any rights or citizenship in the Transvaal.

The situation escalated until the summer of 1899, when the British army invaded. Imperialists in Canada immediately called for military assistance from the Dominion. In no time at all the war became a divisive national issue, with Quebec opposed, and much of Ontario sympathetic to Canadian participation.

The Wilfrid Laurier cabinet reflected the division, but the prime minister eventually got his colleagues to agree on a limited Canadian contingent, to be paid for by the British government.

Locally, there was not much enthusiasm for Canadian participation in the fall of 1899, other than from a handful of super-patriots, all of whom were far too old to be considered for active duty themselves.

The county’s newspapers all took a pro-British stance, but from a position as partisan bystanders. For example, the Fergus News Record on Sept. 21 noted that the British were “taking every means to give the impudent Boer a thrashing which he rightly deserves.”

The local regiments – the Wellington Rifles and the 11th Field Artillery – were not called up for active duty. Less than 50 of Wellington County’s young men desired to serve, and they joined one of the outfits called up, usually the Royal Canadian Regiment of London or the Canadian Mounted Rifles.

The first Canadians left for South Africa late in 1899.

Laurier embarked on an election tour of Ontario in late October. His itinerary included speeches at Guelph and Fergus. At the latter engagement he devoted the conclusion of his address to the South African issue. He downplayed the Imperialistic aspect of it, describing the objective as a defence of basic rights. The ethnic mix of the Transvaal, he believed, paralleled that of Canada, and this country would have a role to play in the healing process when hostilities ended.

Most of all, he deplored political opportunists in Canada who used the war as yet another means to stir up animosities between French and English. Laurier received thundering applause for his position.

A few more local men went off to sign up in the concluding weeks of 1899. There were no civic ceremonies to see them off, though some private citizens organized small events at the station in a few cases.

The constant agitation by enthusiasts for the war, backed up by papers such as the Toronto Mail and Empire and the Family Herald, soon had its effect. The Christmas concerts by schools and churches in 1899 had a decidedly patriotic and pro-British flavour. Pro-war sermons became a staple at local churches. Another development was a flurry of interest in rifle clubs, particularly in the north of Wellington.

The Canadian soldiers went into action soon after they landed in South Africa. Kruger’s generals had put together an ill-equipped and undertrained army, who gave a surprisingly good account of themselves before succumbing to the superior British-led forces.

Additional Canadians departed in March 1900 to replace those killed or wounded. Authorities made a request for 54 volunteers from the Ontario Agricultural College, desiring those skilled in handling horses. A small and quiet crowd saw them off on Jan. 9, 1900.

Local support for the war continued to build through 1900, aided by letters from local soldiers published in Wellington’s weeklies. Though loud, the support was not deep. There was no stampede of young men to enlist, and when Col. J.J. Craig of Fergus started a canvas to raise money to buy personal and recreational items for the men already overseas, he had no volunteers, and had to undertake the campaign personally.

The flames of militarism were fanned by rumours and propaganda. Newspapers carried accounts of bloodcurdling atrocities by the Boers. Other stories described dangers closer to home, some put in circulation by those who should have known better. Gen. Hutton issued a press release in February 1900 warning of a Fenian coup that intended to take over the Canadian government “as soon as the weather will permit.”

The full-scale military engagements in South Africa were largely over by the end of 1900, with the British victorious. The Boers did not surrender, but took to the hills in small bands, making quick raids on British positions. To deal with this situation, Lord Baden-Powell (famous later as founder of the Boy Scouts) formed the South African Constabulary. The new force recruited many Canadians who had seen service during 1900, and others directly from Canada.

The Canadian regiments returned home early in 1901. Many of the volunteers from Wellington County returned in the second week of January 1901. Their arrival produced the greatest outpouring of patriotism ever seen here.

The Mercury, which had led the pro-British jingoism in Guelph for the previous year, despatched a reporter to Halifax to meet the men and return with them.

A group of about 50, including Lt. John McCrae, was scheduled to arrive in Guelph on Jan. 11. By the time the group left Montreal, it was down to 28; the others deciding that a few more days in Halifax or Toronto outclassed a local reception.

The train arrived at Guelph’s old CPR station in the late evening. The city’s private electrical company had put up arc lights all around the station, and the downtown merchants festooned their storefronts with flags and bunting.

The welcoming committee paraded the men around town late into the night, led by Sleeman’s band, carriages containing veterans of the 1866 Fenian raids, 165 men from the 11th Field Artillery, and battalions of the Wellington Rifles from across the county.

Elora’s turn came three days later. Despite extreme cold, a crowd of about 500 – including all the students from the public school – gathered at the CPR station to meet the regular morning train on Jan. 14. Two Elora veterans were on board, and a third who had an uncle in Pilkington. Two other Elora veterans had returned a few days earlier.

That evening the village organized a public reception at the Armoury Hall. It attracted people from the adjoining townships, Alma and Fergus. Interestingly, it appears that there were no volunteers from Fergus itself. The evening began with a parade around the village, similar to the one in Guelph three nights earlier. Then everyone returned to the hall for a three-hour program of speeches, presentations and patriotic music.

Interestingly, the senior military man in Elora, Col. Charles Clarke, was not present.

He sent a note citing “other pressing duties” as the reason for his absence. Each of the four veterans received gifts, and each offered a few words to the crowd. All were modest, perhaps even a little embarrassed, by the great display of patriotism.

There were smaller, but equally enthusiastic receptions for veterans in other towns: for Pvt. O’Connor at Rockwood, for example. A large crowd greeted Trooper Hanna at the Belwood station on Jan. 14, and West Garafraxa later held a reception for its four veterans.

All the hoopla reminded military people that the oldest veterans, those of the Fenian period, had never been honoured. Special medals were struck, and presented to the aging veterans in February 1900, 35 years after the events.

Patriotic concerts and speech making continued through the winter and spring of 1901. Fighting continued in South Africa as an increasingly dirty guerilla action, with civilians bearing the brunt of the casualties.

Domestic pressure on the British government resulted in an end to the war in May 1902. The remaining Canadians straggled home, but the patriotic fever had peaked a year earlier. Now there were stories of British atrocities against civilians, and the extreme patriots had much less to say.

Perhaps because relatively few Canadians participated, the Boer War disappeared from the public mind soon after it ended.

In the 1940s and 1950s, the Boer War regained some of its place in Canada’s military history – it was the first time, after all, that Canadians fought in an overseas war.

More recently, its place has been taken by those who participated in the Korean War, in the merchant marines, and in the many peace keeping assignments that have preoccupied the Canadian military for the past 40 years.

*This column was originally published in the Advertiser on Nov. 22, 2002.