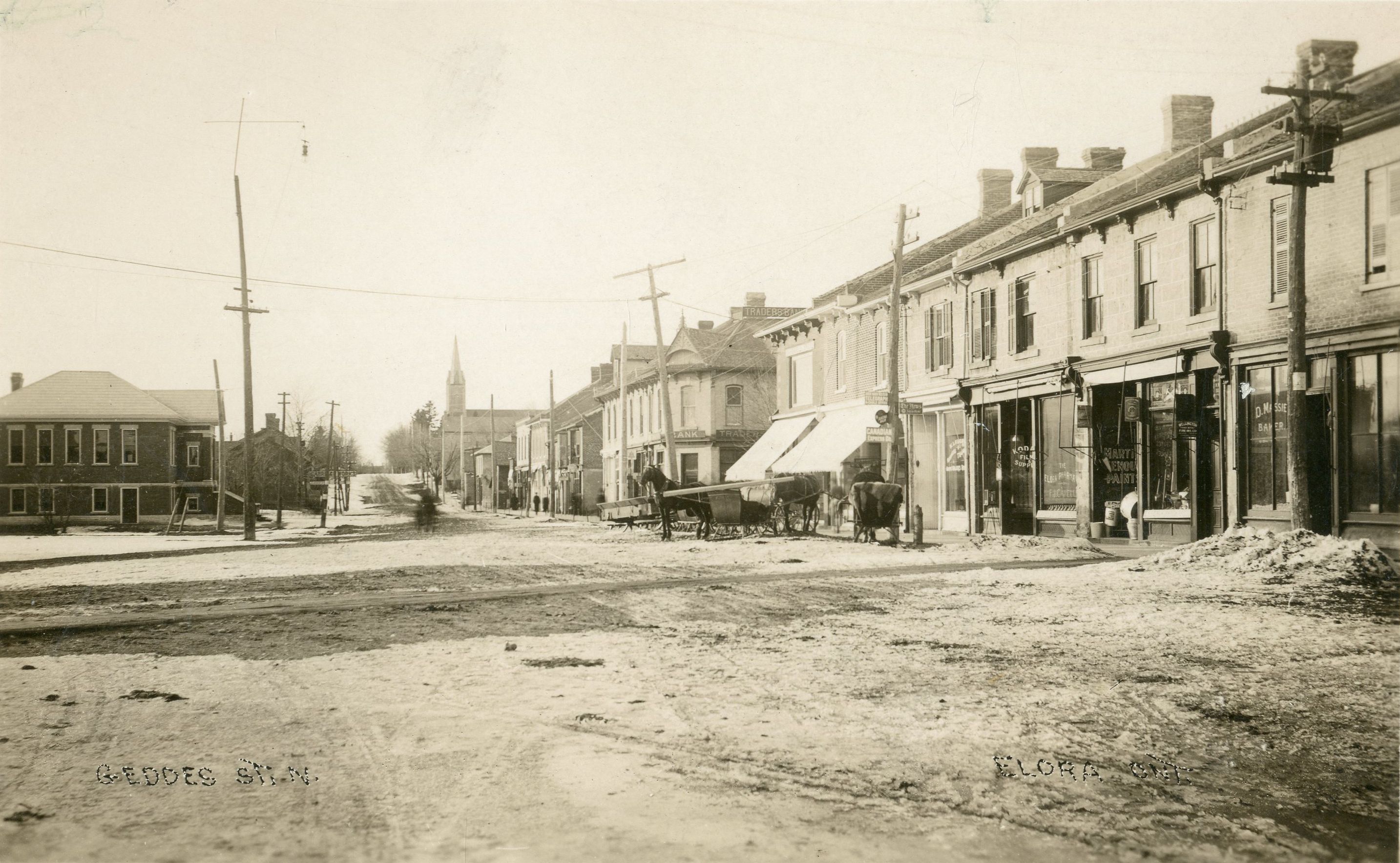 Elora’s pride - The Carnegie library building was a great advance over the cramped rented quarters that had housed the local book collection for decades. This winter view was taken within two years of the building’s erection. The post office, constructed in 1912, is absent in this photo, giving a clear view of the newly constructed library on the left. Both carriages and sleighs are parked with their horses in front of stores on the east side of Geddes St. Wellington County Museum & Archives ph 492

Visitors to Elora are sometimes struck by the fact that the stores and commercial buildings on Geddes Street in Elora are all on the east side of the thoroughfare.

This situation has changed somewhat with the construction of the new Toronto-Dominion bank building, but the generalization has held true for most of the history of the street.

The west side of Geddes between Henderson and Moir was typical of the 19th century fringe areas that bordered the core commercial areas of many Ontario small towns. At that time Mill Street was the prime commercial zone in Elora.

Lower land prices up the hill, on Geddes Street, attracted businesses that desired to be close to other business activity, but could not afford prime locations. Such fringe areas usually contained a side-by-side mix of commercial, industrial and residential properties.

Alexander (Sandy) Cuthbert and George Noble pioneered in this area of town when they moved their carriage-making shop from the south side of the river to larger quarters, on the present site of the telephone exchange, in 1862.

At the time, Elora’s commercial core was confined largely to Mill Street, but their Geddes Street location provided convenient access to farmers coming into Elora, and it was close to the market grounds.

After the Cuthbert and Noble partnership broke up, Sandy Cuthbert began a new business across the street. Noble’s carriage works remained in business until 1912.

In 1875, Sandy Cuthbert purchased the house on the lot next door to the carriage factory, at the corner of Geddes and Henderson. He had been renting the house for several years, but due to the sketchy nature of the records, it is difficult to date the house precisely. However, the balance of evidence suggests that it was built in the early 1860s, about the same time as the carriage factory.

It was at this time that the door on Henderson Street was closed in, and the front door moved to the Geddes Street side. At the time, Murray was principal of the public school. He later served as Elora’s clerk-treasurer.

The original part of the Murray house is older than any of the commercial buildings across the street. It is a continuing reminder that in the 1860s, this area was far from the commercial centre of the village.

The building to the north of the carriage factory, recently demolished to make way for the new bank building, was featured in this column some time ago. Built by Gavin Middleton in 1874, it housed his woodworking shop, with a room upstairs that was used by local temperance groups that were strongly supported by the Middleton family.

During the 1870s, the property was rather messy, surrounded by piles of lumber and scrap wood. Before he constructed the building, Middleton had operated his lumber yard on this location.

The block south of Henderson Street contained no buildings until the early 20th century, when the library and post-office were built on land that had originally been used for market purposes. For a couple of decades, there had been cattle pens on these lots, but for most of the 19th century they were vacant open space, used for temporary storage and by local firewood dealers.

Elora’s thriving cattle market of the 1860s declined drastically after 1875. Village leaders searched for ways to revive it until after 1900. The proximity of the cattle market is what attracted many of the merchants who built stores on the east side of Geddes Street.

They believed that having a cattle market in the centre of the village provided advantages not possessed by other communities. Unfortunately, this concept, by the late 1800s, had become old-fashioned, and the presence of the downtown cattle market hindered as much as helped Elora’s commercial vitality.

The appearance of the downtown core changed dramatically with the construction of the library building in 1909. Elora had libraries of one sort or another from the 1830s. The one formed by the Mechanics Institute was by far the most important, but the book collection never had a permanent home. It was always located in rented, and sometimes borrowed, space above stores.

This rental arrangement continued after the village took over the management of the library in 1906. Elora industrialists John C. Mundell and T.E. Bissell supported the revitalized library with donations.

In 1908, the village began correspondence with Andrew Carnegie, the American steel magnate who was employing his personal fortune to provide capital funds for public libraries.

Carnegie agreed to provide Elora with $6,000 for a building.

The proposed library quickly became a controversy. Some residents feared the village would be saddled with high operating and maintenance costs. As well, there was no agreement on a location. The first proposed site was at James and Metcalfe Streets (the location of the Elora Legion). Eventually, the village decided on the Geddes Street location.

The design of the Elora library follows the conventions of the time. There are unique features to the building, but it is similar to libraries in other small towns built in the same period.

Further controversy arose during construction, when the project went over budget. Carnegie eventually provided a further $400. The building opened in January 1910. An important feature was the basement meeting room, which has been used by local service clubs for the past 108 years.

The library predates the Elora post office by two years. The village was fortunate the federal government chose this site for its building. At the time, the government planned to make Elora a port of entry, and the building was designed to contain a customs office as well as the post office.

The post office project, budgeted at $16,000, was considered a gross extravagance at the time. The modern equivalent, accounting for inflation in the intervening years, would be in excess of $1.25 million.

When the post office opened in January 1912, it became, along with the library next door, the visual focus of Geddes Street, and the anchor for the downtown core that the cattle market was intended to provide.

*This column was originally published in the Elora Sentinel on July 20, 1993.