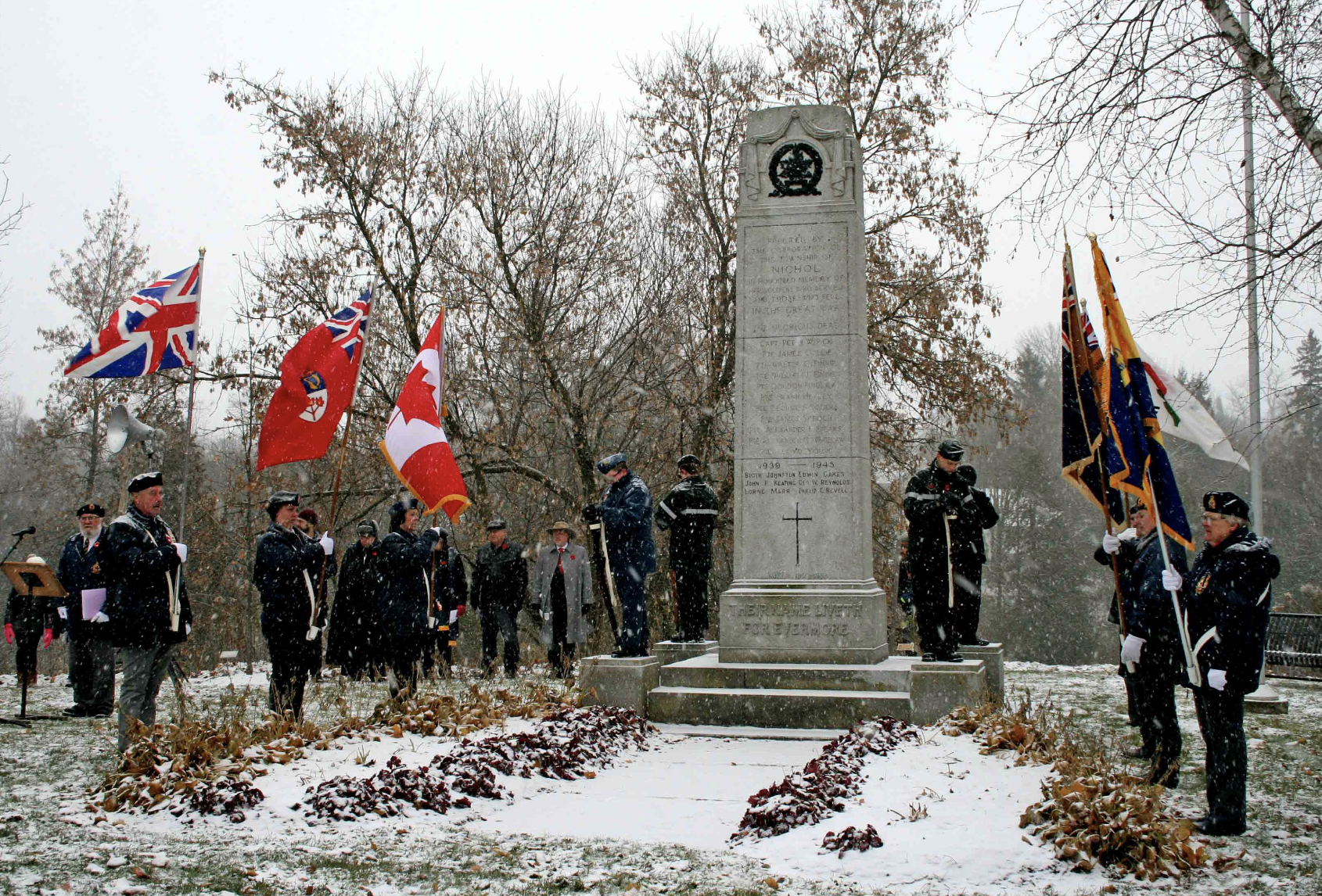 Members of the Salem community gathered on Remembrance Day last year to honour those who made the ultimate sacrifice. This year, Nov. 11 services will be scaled back due to the COVID-19 pandemic, with attendance at most services restricted to Legion members and dignitaries only. Advertiser file photo

WELLINGTON COUNTY – After struggling financially for months due to the COVID-19 pandemic, Royal Canadian Legion branches across the country will be forced to scale back Remembrance Day services and, in most cases, close them to the public altogether.

For the first time ever, Legion Command is discouraging Canadians from attending Nov. 11 ceremonies, which will look decidedly different this year due to the absence of parades with veterans, military members and cadets.

Officials acknowledge the challenges presented by COVID-19 are difficult, especially given this year marks the 75th anniversary of the end of the Second World War, but they are “not insurmountable.”

“As so many other commemorations have either been cancelled or delayed by the current pandemic the symbology of our Legions and community leaders paying homage to past sacrifices and before the eyes of those that served is more important now than ever,” states a recent Legion Command letter to all branches.

“Our pledge to never forget echoes loudly throughout a land that has been immersed in isolation with a population whose focus is far from the events that we honour with this ceremony.”

Within Wellington County, municipalities and Legions are taking different approaches to Remembrance Day services, all while keeping in mind the following:

Puslinch Township does not have a Legion, but it annually offers a Remembrance Day service at the Aberfoyle cenotaph.

Organizer Vinnie Klimkosz said the Optimist Club of Puslinch is moving to a drive-in and online format this year.

“We are going have a sound system set up, so if people wanted to sit in their cars and listen to the ceremony they can,” Klimkosz said.

He suggests arriving at the Puslinch Community Centre parking lot by about 10:30am on Nov. 11.

The service will also be live-streamed on the Optimist club’s Facebook page (www.facebook.com/OptimistClubOfPuslinch) and on puslinch.ca.

The Aberfoyle Remembrance Day service is annually offered through the Puslinch Optimist Club, the Puslinch Ministerial and the Township of Puslinch. This year’s service in Aberfoyle will be a drive-in event due to COVID-19 restrictions. Advertiser file photo

There will be no parade and the colour party will be limited for the Nov. 11 service at 11am in Arthur.

“We discourage attendance by anyone other than veterans, dignitaries, [the fire department] and Legion members,” said Arthur Legion Branch 226 president Robert Hicks.

“Ever since I have lived in Arthur, the service at the cenotaph has been shoulder to shoulder, flowing out on to George Street.

“I will miss this solidarity in Canada’s Most Patriotic Village.”

Hicks said St. Andrews Presbyterian Church will be live streaming the service on Facebook on the Arthur What’s Happening and the Legion pages.

In addition the “Salute the Veteran Banners” will be going up in Arthur this week.

“We want everyone to stay safe as we remember those who fought for and died for our freedom,” said Miller.

“Normally we would have 200 or 300 people watch us parade from the Legion to the cenotaph, with participation from veterans, the fire department and OPP. This year we’re not even closing streets,” Cubbidge said.

In fact, Elora officials are encouraging people to watch televised coverage of Remembrance ceremonies instead of attending the Elora service at Nov. 11 at 11am.

The Elora Legion will also hold a service at the cenotaph in Salem at 9am.

“We want to honour the veterans, but we certainly want to keep people safe,” said Cubbidge.

Elora Public School students took part in the 2019 Remembrance Day ceremony at the Elora cenotaph. Due to COVID-19 pandemic restrictions, students will not be taking part in local services this year and attendance at most services will be limited to Legion members only. Advertiser file photo

The public is discouraged from attending the annual Erin service at the cenotaph a 10:45am on Nov. 11.

It will be a shorter service with a limited number of officials present. Masks will be worn, physical distancing maintained and wreaths will be placed in advance.

“Citizens … may wish at the eleventh hour to stand in front of their house or some appropriate location for two minutes of silence, or place a poppy at the cenotaph in remembrance later in the day,” said Erin Legion service officer Doug Kirkwood.

The annual Veterans Dinner and Sunday Remembrance has also been cancelled this year.

“Letters have been sent to all Veterans explaining the circumstance, thanking them for their service and reminding them that they are not forgotten and wishing them to remain safe and well,” Kirkwood said.

Poppy sales will also look different in Erin. The sale begins on Oct. 30 and will run until Nov. 11.

“Some of our veterans and families are dependent on funds from the Legion Poppy Trust Fund so your generosity is appreciated,” Kirkwood said.

Poppy chair Verna Bludd said the local Cadets will not be involved in poppy sales this year but trays will still be set up in stores for purchases.

Bludd also said she’s trying to organize Legion members to coordinate a table outside in the ValueMart plaza in Erin Village.

Kirkwood warned there would be door-to-door poppy sales or telephone solicitation this year.

“Be wary of any unauthorized requests,” he said.

The veteran street banners will be on display starting Oct. 25.

Tom Kirby, poppy chair of Fergus Branch 275, said his branch is encouraging people to watch a Remembrance Day ceremony on TV as well.

“Unfortunately, we have to discourage kids, so schools are being asked to stay away. We’re not closing Tower Street; there will be no parade,” he said.

There will be a small gathering at the cenotaph where wreaths will be pre-placed. MP Michael Chong and MPP Ted Arnott will each place a wreath, Chong’s representing the country and Arnott’s for the province.

“We don’t want big crowds, which is tragic,” Kirby said. “If people do come, they should wear a mask, stand across the street and keep physically distanced.”

Names of veterans will still be read and the Fergus bell will be sounded, he said.

“That’s what we can do this year.”

The branch was successful in selling banners featuring the names and photos of veterans. Kirby said they will be placed on lampposts on St. Andrew Street and it should be an impressive display.

Poppy boxes will be placed at banks and at the Legion building in Fergus.

“It will be vastly different this year. Unfortunately, we have no control over this,” he said.

“We’re adapting as best we can,” said David Thompson, chair of the poppy campaign for Branch 234 in Guelph.

Thompson said Legions can’t count on the help of cadets for Remembrance Day ceremonies or for selling poppies this year, and that feels like a real loss.

“Our membership is mainly seniors so that limits us a bit, too,” he said.

Thompson said in the past the Legion has sold pins and bracelets as well as poppies. This year it will be just poppies.

Boxes will be set up in Stone Road Mall, Old Quebec Street mall, and Costco beginning Oct. 30 through to Nov. 11.

Donations can also be made online by e-transfer or by mail.

“Last year we raised $100,000. We are expecting a reduction this year but remain hopeful the community will be supportive,” he said.

As for Remembrance Day, the ceremony usually held in the Sleeman Centre has been cancelled.

Thompson said they are finalizing details, but a much smaller ceremony will be held at the cenotaph downtown and also at McCrae House – the birthplace of Col. John McCrae, who wrote the famous poem, In Flanders Fields.

“We hope it will be televised and people can watch that way,” he said.

Thompson said in the past, Guelph has supplied a colour guard for ceremonies in Rockwood, but, “There have been no requests this year.”

The branch office is open from 9am to noon weekday mornings.

Those who would normally purchase a wreath are still invited to do so, but there will be no in-person laying of the wreaths. Memorial wreath names will be read and published on Facebook.

Wreaths will be pre-placed at the cenotaph ahead of the Legion-only service.

The general public will not be invited as there is no parade, inside service or banquet this year.

The Legion gathering will include a brief service with a colour party and trumpeter.

“COVID-19 will not stop Legionnaires from their duty to remember those who have served or are currently serving today,” Branch 296 officials stated.

“Our support of veterans and their families is essential at all times. We will remember them. “

The Clifford cenotaph service, hosted by Branch 296, will be on Nov. 8 at 2pm.

The Harriston service will be at Harriston cenotaph on Nov. 11 at 11am. 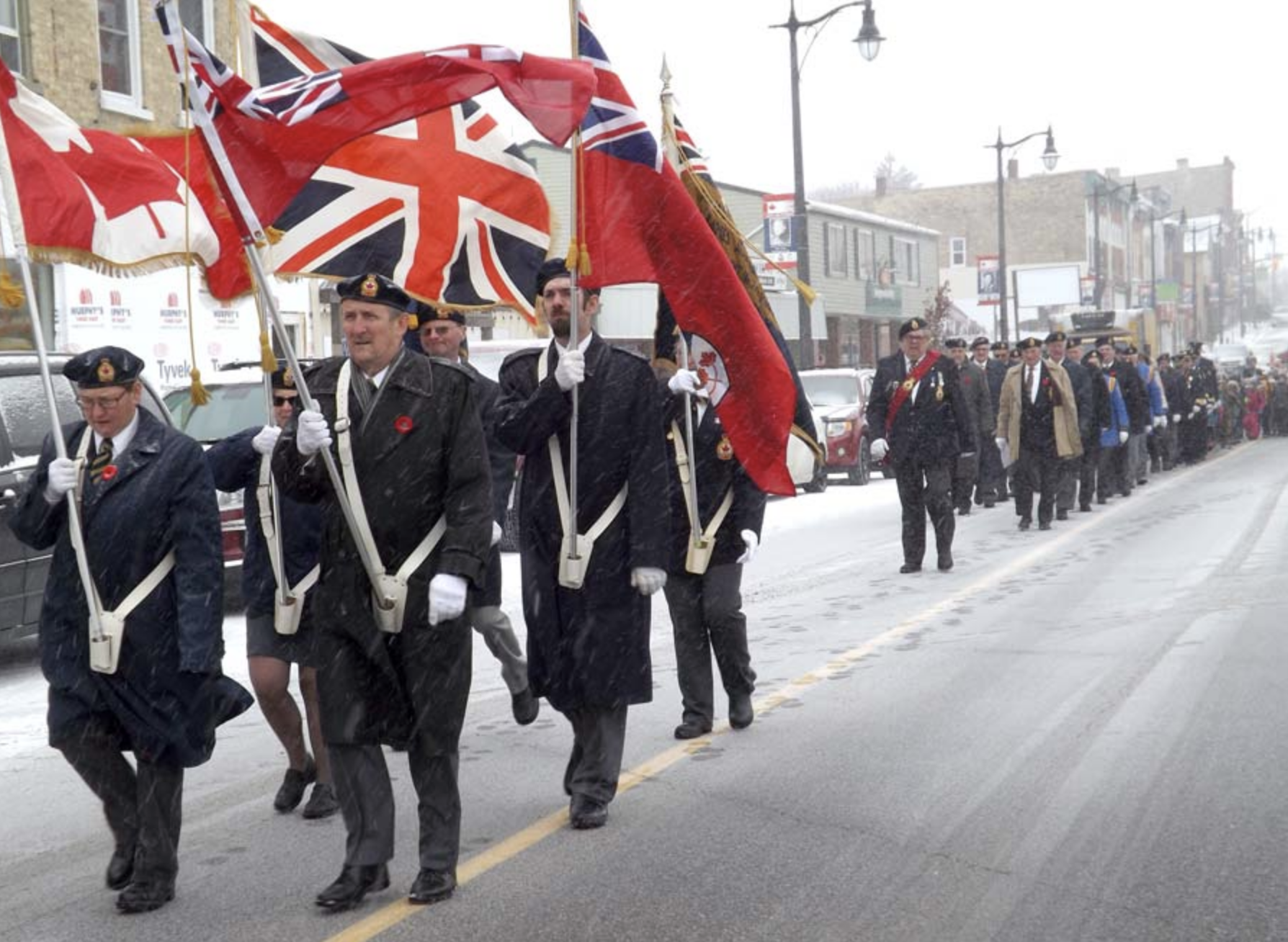 The Harriston Legion colour party led the Nov. 11, 2019 march from Branch 296 to the cenotaph in Harriston. Advertiser file photo

“Poppies will be available in some of the local businesses, as well we hope to have a few volunteers out in the area in a few locations after Oct. 30,” says Branch 134 president Ken Thompson.

The first will be in Holstein on Nov. 8 at 2pm and the second will be in Mount Forest on Nov. 11 at the cenotaph starting at 10:45am. There will be no parades.

There will be a limited number of people allowed to attend at the cenotaphs, including some Legion personnel, a Colour Party and dignitaries.

Many of the wreaths will be placed ahead of time with a select few placed during the service.

Anyone wishing to purchase a wreath ahead of time is urged to contact the branch at 519-323-1570.

“We ask that everyone obey the COVID-19 protocols at all times,” stated Thompson.

The Palmerston Legion will be having its annual Remembrance Day service at the cenotaph at 11am on Nov. 11.

“We had to make a difficult decision because of COVID-19 restrictions to limit this years’ service to Legion members only,” branch officials state.

There will be no parade to the cenotaph or social/lunch at the branch afterwards.

All wreaths will be put in place at the cenotaph with identifying ribbons.

This year, the Legion is offering a drive-thru roast beef dinner at a cost of $15 for adults and $7 for ages six to 12.

Guelph-Eramosa does not have a Legion but the municipality will host a Remembrance Day service on Nov. 11 at 10:55am at the Rockwood cenotaph.

“For the first time, spectators will be discouraged from attending in person, due to the limited space and requirement to physically distance,” states a press release from the township.

The “much smaller yet heartfelt ceremony” will include:

“We remember all of those who risked – and lost – their lives fighting for the freedoms we enjoy today,” officials stated.

The County of Wellington’s Remembrance Service will be held at the Wellington County Museum and Archives in Aboyne on Nov. 5 at 10:30am.

“I’m happy to report that the Legions are going to participate on Nov. 5 and we are going to be having the Remembrance service outside at the museum,” county councillor Mary Lloyd advised Wellington County council during the Sept. 24 meeting.

Officials say the service is open to the public, with physical distancing in place and masks encouraged.

In addition, the county museum will again be offering its candlelight tribute to the county’s fallen on Nov. 10 and 11.

“Due to the COVID-19 pandemic, only museum staff will be placing remembrance candles on each of the markers,” officials stated.

“Members of the public are welcome to visit the markers at any time. Physical distancing must be maintained at all times.”