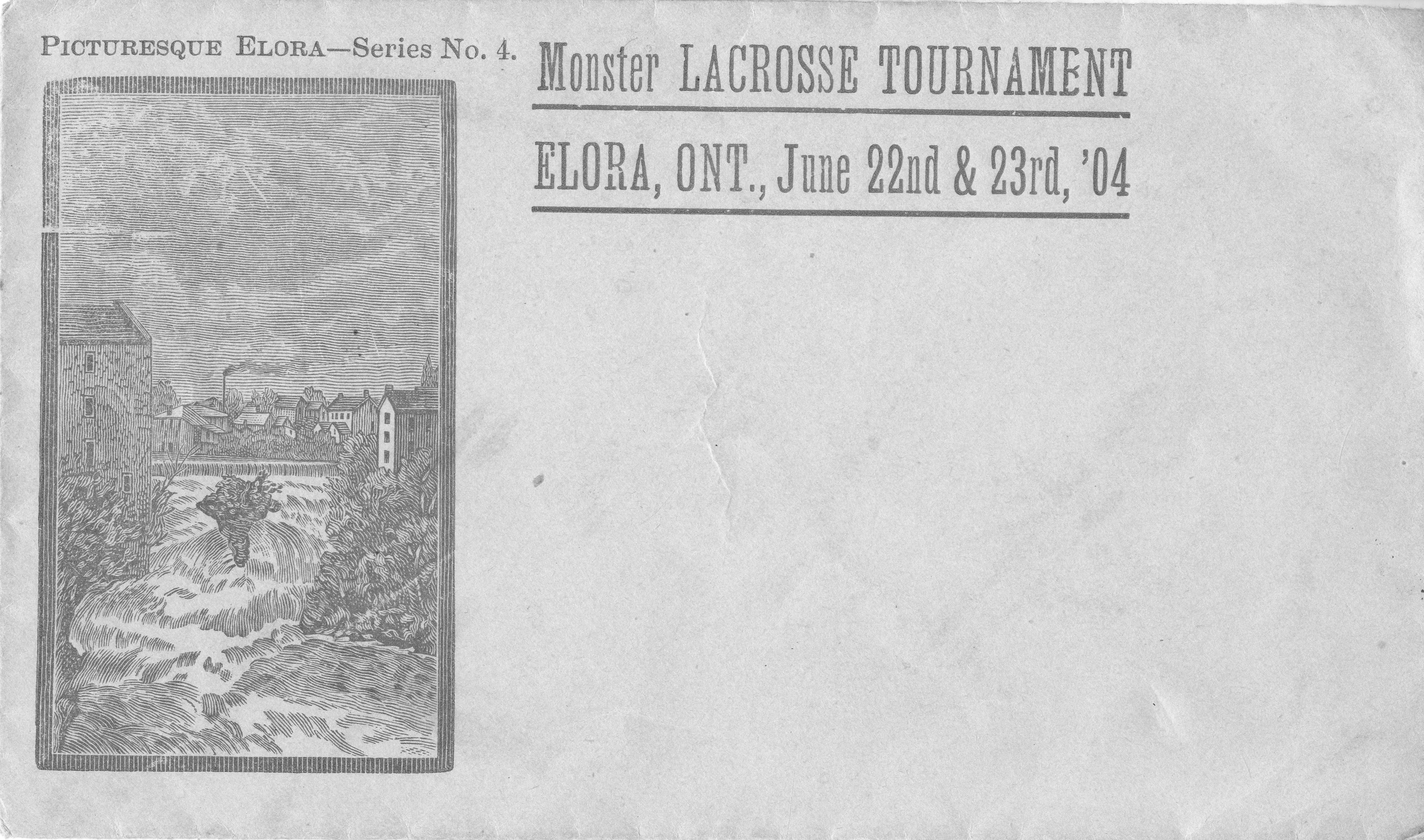 Don’t miss it – Elora’s merchants used these advertising envelopes to spread the word about a 1904 lacrosse tournament. Wellington County Museum & Archives A1996.80

The successful seasons for Elora’s Midget and Junior B lacrosse teams this year (1991) continue a winning tradition that dates to the middle of the 19th century.

Lacrosse was not the first team sport to be played in Elora. Both cricket and curling have roots in the village going back to the 1840s.

Lacrosse, at least in an organized way, did not appear until the early 1860s, but it caught on quickly and, by the end of the decade, was indisputably the most popular sport in the village.

The early clubs were organized each year for the season only, and all their members were players; there were no coaches or managers as such. Membership usually ranged between 30 and 40 people. The men divided themselves into teams for games, which were held sporadically from May to September.

Games were rather rough-and-tumble at the beginning, with 12 men per side. The first widely-accepted rule book did not appear until about 1860, and several years elapsed before it was in general use.

By the time of Canada’s confederation, games were organized with out-of-town teams, often on public holidays during the summer.

There was no formal league. Teams arranged the games among themselves. Ranking was established by the won-and-lost record, and by a reputation for toughness.

Elora’s first outstanding team was the one fielded in 1868. That year, the Elora Rocks defeated the previously-unbeaten Six Nations team and, consequently, were regarded as the Ontario champions.

In these years, there were no periods or time limits to games. Victory went to the first team scoring three goals. A low-scoring game could turn into a grueling endurance test.

Much of the credit for Elora’s successful teams of the late 1860s and early 1870s went to the goaltender, Sam Stephenson, who was a watchmaker by profession. A burly giant of a man, Stephenson’s sheer bulk, combined with a surprising agility in fending off shots, made him a top performer.

Like Stephenson, most of the players were drawn from the ranks of Elora’s merchants, and most were in their 20s and early 30s. There were costs involved in the sport, and most working men could not arrange for time off from their employment.

Members of the club shared all their expenses, including traveling to out-of-town games. Admission was charged, and the gate receipts were divided equally between the teams, which then divided the money among the players.

A winning team that attracted good crowds could make money, but there was always the risk of a losing season — both on the field and financially. Tommy Biggar, who played for the Rocks for five years in the 1880s, recalled one game in Guelph that drew a paying crowd of four people.

The Six Nations players were frequent visitors to Elora in the 1870s and 1880s. More than any other team, they exploited the show-biz quality of sports to ensure a large attendance and good gate receipts at the game.

Normally, they would arrive in town on the noon train and immediately book themselves into the Dalby House or Commercial Hotel. There they would dress themselves in feathers, war paint, nose rings and moccasins. Soon they were on the main street, talking up the game, demonstrating their athletic ability and scaring children. No one wanted to miss the game after one of these encounters.

These were the days when the exploits of leaders such as Sitting Bull and Geronimo were front page news. The Six Nations Iroquois, of course, had been farmers for many generations. They exploited the ferocious image of American plains Indians to intimidate their opposition and boost gate receipts.

They were also very good lacrosse players. Their light-footedness and coordination made their playing appear to be choreographed. They celebrated their victories with terrifying war whoops that, reportedly, were so loud they echoed back from the gorge. On the rare occasions when they lost, they presented the same cries as a salute to their Elora foes.

During the 1880s, there was still no formal league, but Elora did play regularly against teams from Fergus, Guelph, Brantford and the Six Nations. The longest trips were to Owen Sound and Kincardine. The 1883 Elora Rocks were the most successful of the teams of the 1880s, with a 12-2 record on the season.

Local interest in lacrosse peaked in the years between 1903 and 1907, when the Rocks fielded a series of winning teams. By this time, Elora had a team in the junior league, under the auspices of the Canadian Lacrosse Association (CLA), the governing body of the sport in Canada.

The Rocks won the Canadian championship in 1903, defeating Wallaceburg. A concert was held in celebration. It was the social event of the season. The next year, the CLA moved the Rocks up to the intermediate level, over the vociferous protests of the team. But, even at the higher level, the Rocks still managed to advance to either the national semi-finals or finals.

Successful as Elora was in these years, the players found their greatest satisfaction in defeating the Fergus Thistles. The intense rivalry between the Rocks and the Thistles lasted almost half a century.

Elora hosted a major tournament in June of 1904. Curiously, it was not on a weekend, but on a Wednesday and Thursday. Teams from as far as Vancouver participated. The town was jammed with people and most workers declared a public holiday for themselves.

In 1907, the Rocks went to the top at the intermediate level. That year, they defeated the Toronto Maitlands in a wild semi-final game at a tournament at Exhibition Park in Guelph. Teams still consisted of 12 men, but games were now timed and divided into four quarters, with additional time allowed to break ties.

This was perhaps Elora’s most memorable game. This game started in a light rain, which soon turned into a downpour. Feelings were running high at the start of the game. At the end of the third quarter, they flared up in a full-fledged donnybrook.

Hundreds of spectators quickly joined in. All the officials could do was watch the brawl from the sidelines. The lone policeman in attendance beat a hasty retreat, but was soon back with reinforcements. Eventually, a semblance of order was restored, and the game resumed – by now in almost total darkness. Elora carried the day by a score of 8-3. Many believed that the Maitlands started the fight as a delaying tactic, hoping the game would be cancelled due to darkness and replayed the next day.

The Elora Rocks of 1908 and after were less successful, and enthusiasm for lacrosse died over the next few years. This was the end of Elora’s fascination with field lacrosse.

There were periodic efforts over the next 25 years to revive lacrosse in Elora, but none seems to have been successful for more than a year or two. Box lacrosse, the indoor variant of the game, appears to date in Elora from 1929, when an unsuccessful team was fielded and then disbanded.

The Elora team was reorganized in 1935 and enjoyed a good year, advancing as far as the semi-finals. Once again, lacrosse was popular in Elora.

*This column was originally published in the Elora Sentinel on Sept. 3, 1991.