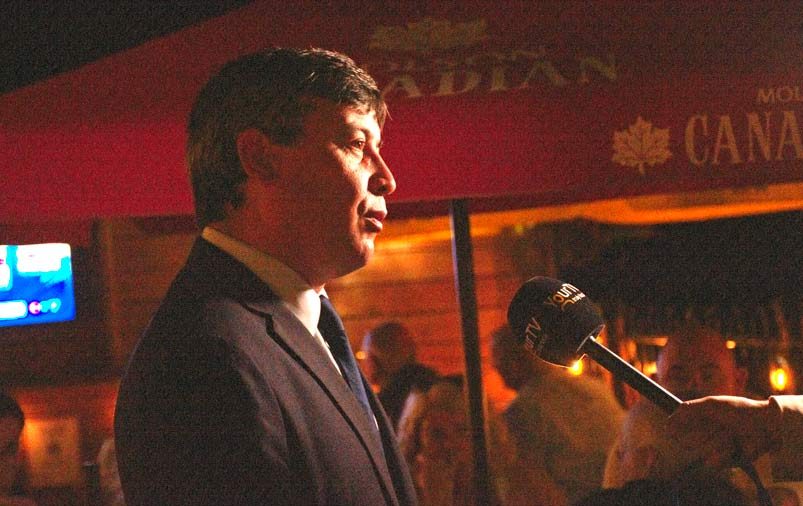 Michael Chong speaks to supporters at the Red Harp in Acton on Sept. 20 after handily winning the Wellington-Halton Hills riding.
Photo by Joanne Shuttleworth

ACTON – Michael Chong was pleased to win the Wellington-Halton Hills riding in the Sept. 20 federal election, but he was annoyed the election took place at all.

He and his campaign team watched the results roll in at the Red Harp in Acton and, glancing at the TV screen around 11pm, with preliminary results indicating a minority win for the Liberals, Chong scoffed at the whole election.

“It looks like Canada returned the same parliament,” he said.

“The Prime Minister called an early election during the fourth wave of a health crisis. But Canadians were not willing to reward him with a majority government. The result is almost identical with 2019.”

Chong said he never takes his support for granted.

“I’m always worried during an election – I have to re-win every time,” he said.

“I’ll do my best to make sure people’s voices are heard. I’ll bring their concerns front and centre.”

Chong said the issues he heard on the campaign trail include unemployment, personal debt and unaffordable housing.

He said the election has been polarizing.

“We need to bring people together now,” Chong said.

“We need to work together to get out of this pandemic. And we’ve pushed off other crises, like Afghanistan. We have lots of work to do.”

Lang said she feels good about her campaign and is grateful to her team, who worked hard on her behalf behind the scenes.

“The end-game for me was a win,” she said the morning after the election.

“I also knew it would be a tough race. Michael is well-respected.

“I was happy to run alongside someone as experienced as him. Overall it was a great experience for me.”

Jahangir said while she was a little late to the campaign race, she felt it went really well.

“I felt the campaign went amazing,” the NDP candidate stated, adding she wasn’t surprised by the results.

“Of course, the hope is to win but that being said, I’m very glad how I was able to speak to Wellington-Halton Hills voters and find out the issues that mattered most to them.

“It was a great campaign and I just want to thank all supporters for getting involved and making their voices heard.”

Jahangir, just 22 years old, said she is planning to run for political office again in the future.

“I’m not a career politician; at the end of the day I am a full-time student who is also working,” she said.

Jahangir said having her mom, Aisha Jahangir, also running in the Guelph riding was a great experience.

“Everything was a learning experience and I just can’t wait for next time,” she said.

Zhu said while he’s disappointed by the results, he’s encouraged by positive steps made by the Green Party.

“It was my first campaign as a candidate … and I think all the positive conversations I’ve had at doors just outweighed the door slams,” he explained.

“I’ve certainly learned how friendly our riding can be and I’m still young and I’m looking forward to running a few times more before I get a seat.”

Zhu said he made a promise to the party’s senior volunteers to run again and he doesn’t plan on falling back on that promise.

He added while he was anticipating a better result, he knew it was going to be “an uphill battle.

“I’m happy to see a gain in our centre; it’s certainly a historical night for the Greens regardless, because it’s the first Green seat in Province of Ontario (Mike Morrice has unofficially won in the riding of Kitchener Centre).

“I’ve been asked whether Annamie will have a political future, but I think it’s more important that she make political history by just being the first Black Jewish woman to debate the prime minister on a national stage.”

The PPC’s Syl Carle did not respond to interview requests from the Advertiser.