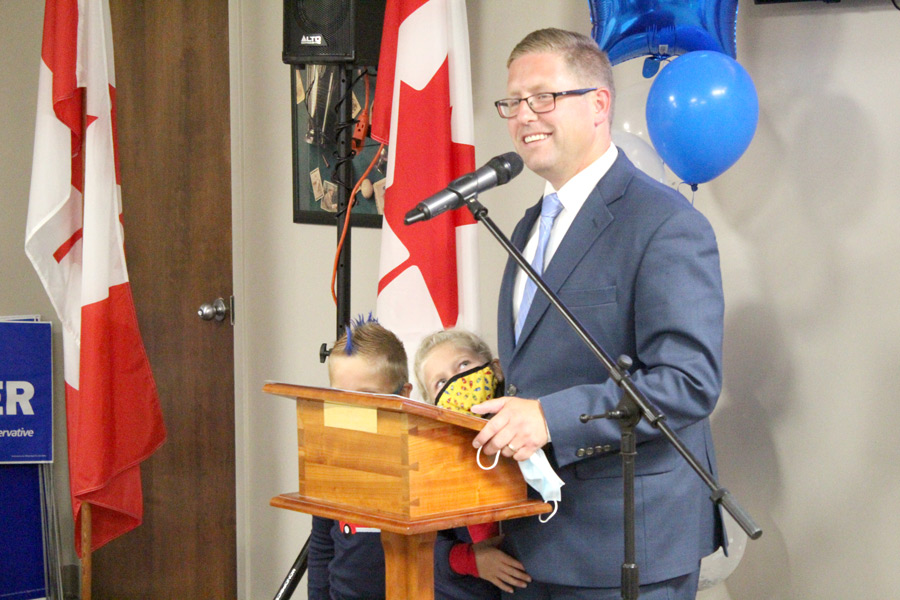 PERTH-WELLINGTON – The crowd of supporters, family and volunteers gathered at the Mitchell Golf Club to celebrate Perth-Wellington MP John Nater’s re-election might have been limited in size due to COVID-19 restrictions, but it wasn’t limited in enthusiasm when victory was announced on Monday.

Following a 36-day campaign that has left Parliament looking very close to the same as it did before the election, Nater reclaimed his seat in the House of Commons.

Nationally, Prime Minister Justin Trudeau’s Liberal Party of Canada retained minority government status with an unofficial seat count at 158 as of Tuesday morning, compared to 119 for the Conservative Part of Canada, 34 for the Bloq Quebecois, 25 for the NDP and two for the Green Party.

“I would like to thank my fellow candidates in this election,” Nater said.

“Brendan and Kevin, I want to thank both of them for running respectful campaigns based on issues and ideas and to Wayne for putting his name forward in this election.

“During normal campaigns, we get to know our fellow candidates very well after criss-crossing 3,500 square kilometres of Perth-Wellington and running into each other at different community events.”

Nater said it was unfortunate that due to COVID, the candidates didn’t have the usual opportunity to get to know each other.

“I would have enjoyed learning more from Kevin, about his life experiences and how to improve our communities,” he said.

“And from Brendan’s passion for politics and his thoughts on the challenges we are facing as a country. So, thank you for stepping forward and participating in this election.”

Although all the volunteers that helped with the campaign were not able to make attend the reception due to restrictions on capacity, Nater made sure to thank them for their efforts.

“Although it may be my name on the ballot,” he said.

“It’s because of the work of each and every one of you that we won the election here in Perth-Wellington tonight.”

Looking at the election results during the reception, Nater noted that the House of Commons will look similar to where it left off with Liberals as a minority government.

“But I think that’s reflective of what Canadians want to see,” he said.

“Obviously they have re-elected a minority Parliament and it’s an expectation that somehow we make things work.

“Going back to Ottawa, looking forward to working across party lines, across the benches to see what we can do to deliver for the shared constituents that we serve across the country.”

As of Tuesday morning, with 204 of the 205 polls reporting results, Nater’s unofficial vote count was at 26,135 votes, about 49 per cent of votes counted.

Contacted on Sept. 21, Knight said he was happy with the campaign he ran with his riding team.

“I’m proud of the campaign we put forward in what is a very challenging COVID environment and extremely proud of my volunteers and appreciative of the support I got from the riding,” he said.

“I think the main thing is that we put forward some issues to focus on: so, a very ambitious direction on climate change, we had the talk about housing, which is one of the items shared across the country, and brining in affordable daycare, are just three of many things.

“That is the mandate that Canadians have picked and I, for one, look forward to seeing those things being actioned.”

Knight said he would be returning to his position as executive assistant for Liberal MPP Mitzie Hunter and “I hope to help out my own riding whenever possible with provincial issues as they come forward.”

“I think we ran a good campaign and I think we wanted to try to connect with as many towns and communities as we could in a short time … we really maybe haven’t’ done enough in the past, so we really got out there and connected with people,” he said.

“Obviously we’d like a different result and obviously it’s unfortunate that we went through this election only to end up back exactly where we were before the Liberals called it.”

He added, “I think that’s a tough pill for all Canadians to swallow, to spend $600 million on an election and to be given a mandate that says ‘We liked where parliament was and we’d like you to continue to work together’ – so hopefully that message got through and there will be some cooperation across party lines.”

Kruchkywich feels his campaign team made inroads in a traditionally Conservative riding.

“I think there’s a lot of young progressives out there … who really wanted to talk about stuff and talk through stuff and who were interested in what we have to offer. I think we made some inroads, and we’ll continue to do the work,” he said.

Kruchkywich said he believes that, locally, the biggest issues in the campaign were affordability in general and affordable housing in particular.

However, he added, “All the issues around vaccine passports and stuff and all the anger and confusion around that, I think that sort of took over at the end.”

Baker said he told his team that “when we know that we did everything we could to win this thing, then we can wake up proud.

“And that’s exactly what we did,” he added.

Baker said the increased vote share garnered by the PPC both nationally and locally is a sign “there are people waking up and understanding that this country is in serious, serious trouble.

Baker denounced what he called “the dictatorial approach” taken by the prime minister as part of the reason for his party’s growth.

“There was no justification for the election to begin with … He was selfish and arrogant and thought that he could become a dictator for life, because that’s where we’re going in this country. If we don’t stop him then we are in big trouble in this country and people are waking up to that and I believe that’s why we grew and why we have such a good following,” Baker stated.

Baker said he believes his party’s growth will continue beyond current pandemic frustrations.

“We’re finding people that are very much awake and aware what’s going on in our country … If you go back to the first century Christian church, it grew under persecution. Now I’m not claiming to be part of a first century Christian church here, but I am claiming to be part of a movement that has grown under persecution,” he said.

Baker a first-time candidate at the federal level, said he would consider a future run on behalf of the PPC.

“I have a really good team. I don’t know if they want me to run a second time or not, but I will definitely entertain that thought if and when the time comes, and my health holds up,” he said.

*With files from Colin Burrowes, a Local Journalism Intiative Reporter with Midwestern Newspapers.