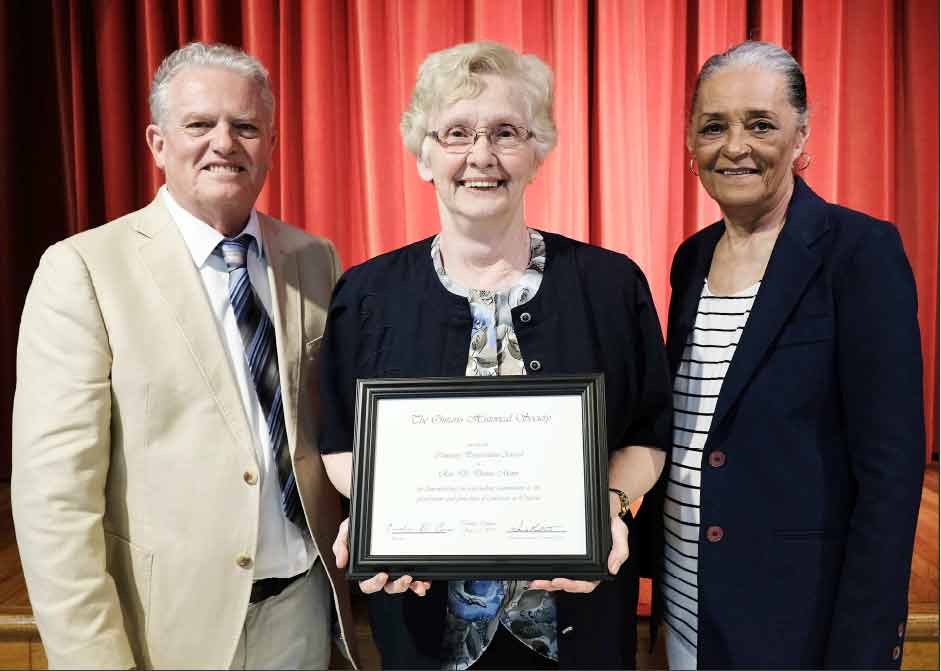 She was recognized for  her efforts to restore, preserve and maintain West Bentinck Presbyterian Cemetery in West Grey.

The award, presented at Tyndale University College and Seminary in Toronto, recognizes individuals or  not-for-profit heritage organizations that have demonstrated an outstanding commitment to the preservation and protection of cemeteries in Ontario.

A news release from the OHS states that in the early 1860s, a congregation of staunch Scottish Presbyterians formed in what was then Bentinck Township under a minister from Chesley, Ontario.

Eventually, a location for the church was agreed upon when Andrew Storrar donated the land for the establishment of the church and a cemetery. Storrar was the first burial in 1872.

Unfortunately, accurate records were not kept until 1877. By 1922 the membership had dwindled and the church was officially closed.

Five years later, the church building was sold, torn down and moved to Elmwood, where it was used as a community hall and later a library. As a result, the cemetery containing the graves of the early pioneers was left behind, the victim of vandalism and neglect.

In 1966, concerned residents removed trees and scrub brush and gathered the fallen tombstones, placing them in a block.

By the time Mann became actively involved in the 1990s, the Bentinck Cemetery had been permitted to devolve, once again, into a place for partying teenagers, vandals and those interested in the occult.

Mann has always considered preservation of the past important for historical and educational purposes, officials say. Through her leadership over two decades, the site was rededicated on June 28, 2015 and the dignity of West Bentinck Presbyterian Cemetery restored.