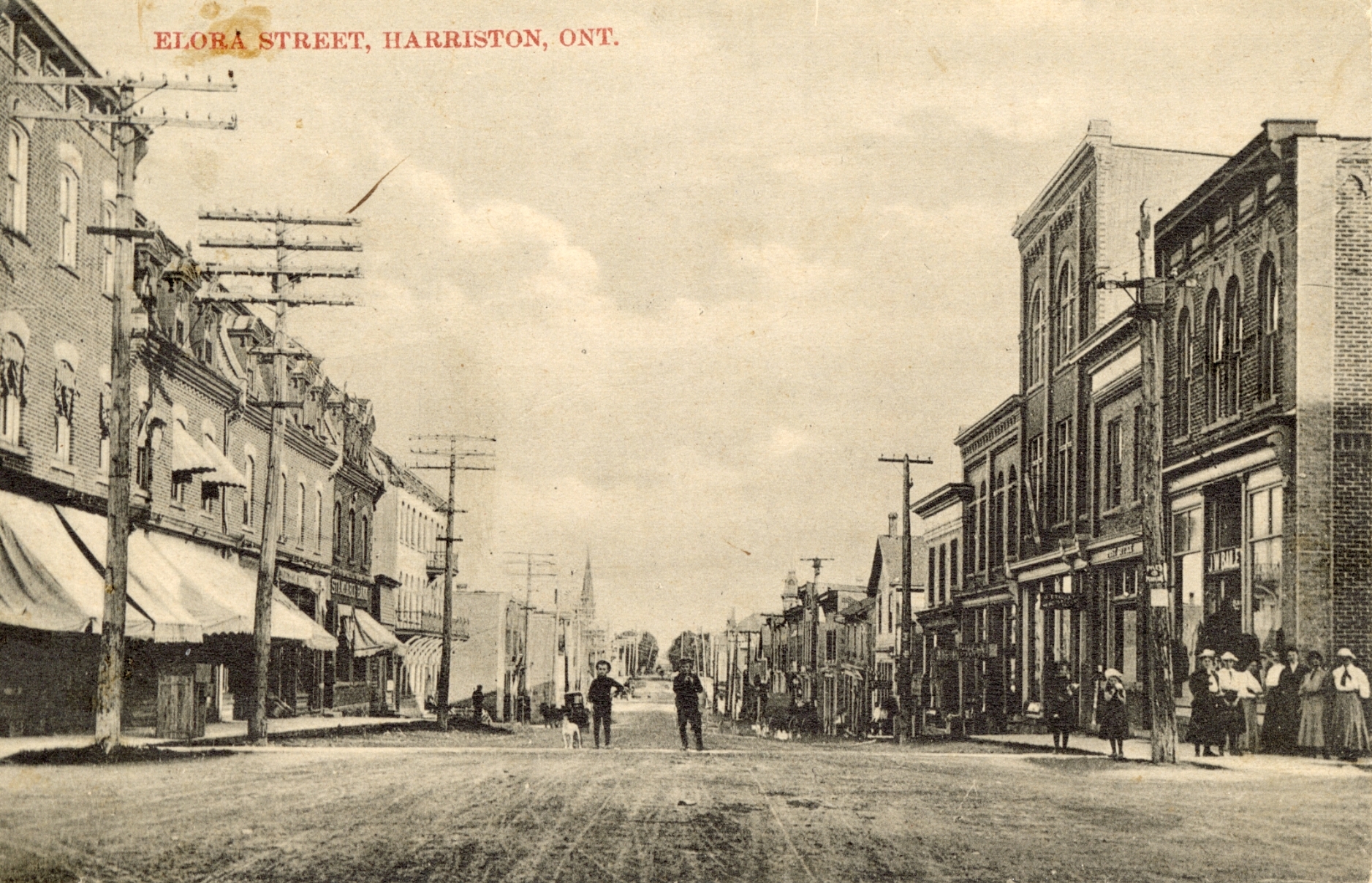 A couple of weeks ago, Ian Easterbrook, of Fergus, motioned to me when I walked into the archives at the Wellington County Museum.

He showed me a fascinating pair of postcards that had been safely stored away in a dusty corner of the archives.

The first postcard, which was produced from a photograph, shows the main street of Harriston, looking south from the corner of Arthur Street.

A half-dozen women are standing on the southwest corner, apparently watching the photographer. Two young boys, accompanied by Bowser the dog, are on the sidewalk crossing the street.

There are cement sidewalks, of fairly new vintage, on both sides of the street. Canvas awnings shade the storefronts on the left.

Very prominent are the utility poles, supporting electrical wires on the right, and telephone and telegraph circuits on the left. Altogether, it seems like a typical routine main street scene popular on postcards in the years immediately before the First World War.

The second postcard shows the same scene, but without the utility poles. 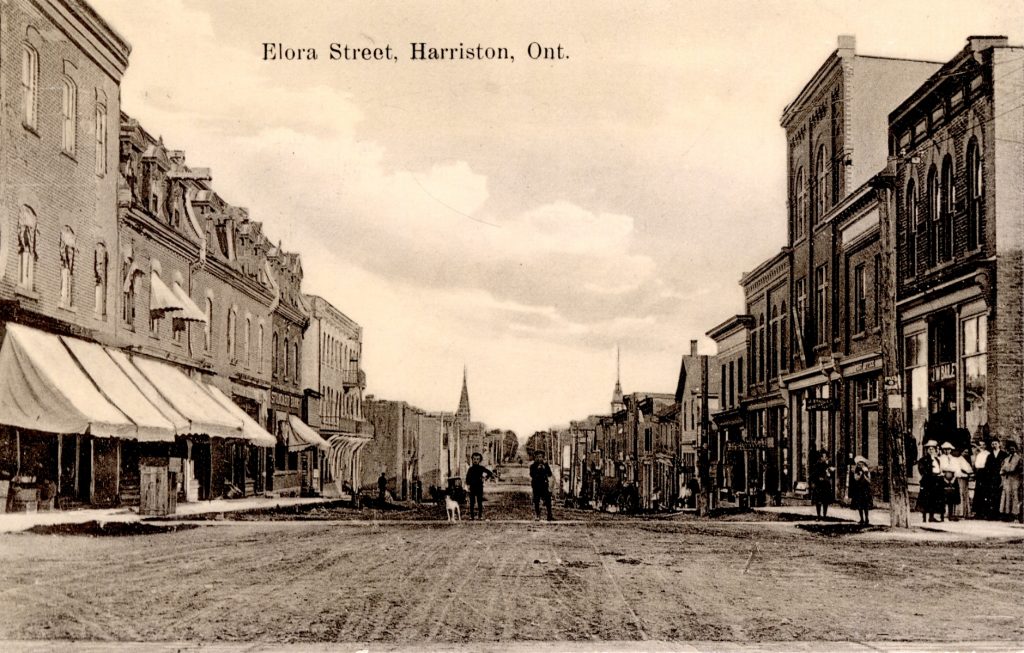 Look a little closer – it is the same photograph as the first one! The same women are watching. Bowser and the boys have not moved an inch in the middle of the road.

Someone went to a lot of trouble retouching the photograph and painting out the poles. This is surprising. Few people in the early years of this century considered main street poles to be visual pollution. Electrical distribution to all residences, numerous electric street lights, and dozens of telephone circuits conspicuously proclaimed the progress and prosperity of the town.

I arranged for Doug Scott of the museum staff to make eight-by-10 enlargements of the cards. Examining these closely reveals that the retouching job was not so well executed as it first appears.

The first pole on the right side has not been entirely removed. It is merely truncated. A portion of the crossarm is still there, and some of the wires end in mid air.

The next pole on the right side has been clipped off even with the roof line of the building behind it. Most of the poles farther down the street have not been altered at all.

The darkroom technician spent more time with the first four telephone and telegraph poles on the left side of the street. This work involved painting in portions of the walls, windows and awnings behind the poles.

A very good job has been done removing all traces of the first pole. The next one is virtually all gone, except for portions of the crossarms, which appear as horizontal protrusions from the dormer windows on the mansard roof. Portions of the third pole crossarms are superimposed on the facade of the Collison House (Coronation Hotel). Segments of the pole are dark markings on the second and third floor balconies.

Parts of the fourth pole and its crossarms are also visible, and portions of poles farther along have been painted out.

I have amused myself by trying to date pictures of downtown Elora very precisely, but I am not sufficiently familiar with downtown Harriston buildings to attempt the job with this scene. There are a few general clues.

Picture postcards enjoyed a relatively short vogue. The post office authorized their use in 1904, and they came into wide use in 1907 and 1908.

They fell rapidly out of fashion after 1912, and received a further blow in 1915, when the postal charges rose from one to two cents. The obvious time frame, therefore, is between 1908 and 1913, but could be a year or two earlier.

Considering the number of telephone lines, I doubt that it could be much before 1905. The clock tower of the Harriston post office, built in 1909, is not visible, but it might be obscured from this angle.

In my file on the telephone system there is a note that some of Harriston’s downtown lines were replaced by a lead-sheathed cable in 1907. There is no indication of the exact stretch of line, so this piece of information is somewhat ambiguous.

From the angle of the photo, only two names are visible: J.W. Bailey over the first door on the right, and the Standard Bank on the left. The latter is no help in dating: it opened in Harriston in 1874 and was taken over by the Bank of Commerce in 1928.

After I looked at these pictures it occurred to me that someone could be seriously misled by being able to examine only the retouched picture. On first examination, the date of the retouched photo should be the early 1890s: neither electric nor telephone lines seem to be visible. The portions of crossarms and poles that remain could add further confusion.

Overhead utilities are one of the best tools available for the dating of downtown photographs in the period from 1860 to WWI. This is not quite a 60-year frame, but it begins with the first crude telegraph lines, and ends with lead-sheathed cable and three-phase electrical service.

Local historians are wise to acquire information on the significant dates for the public utilities in their municipalities. Such knowledge is a prime tool for dating pictures such as this.

We should also be aware that there is a pitfall: photographs might have been retouched and altered significantly. We often hear that “pictures don’t lie.” This pair of postcards neatly refutes that one.

*This column was originally published in the Wellington Advertiser on March 15, 1999.