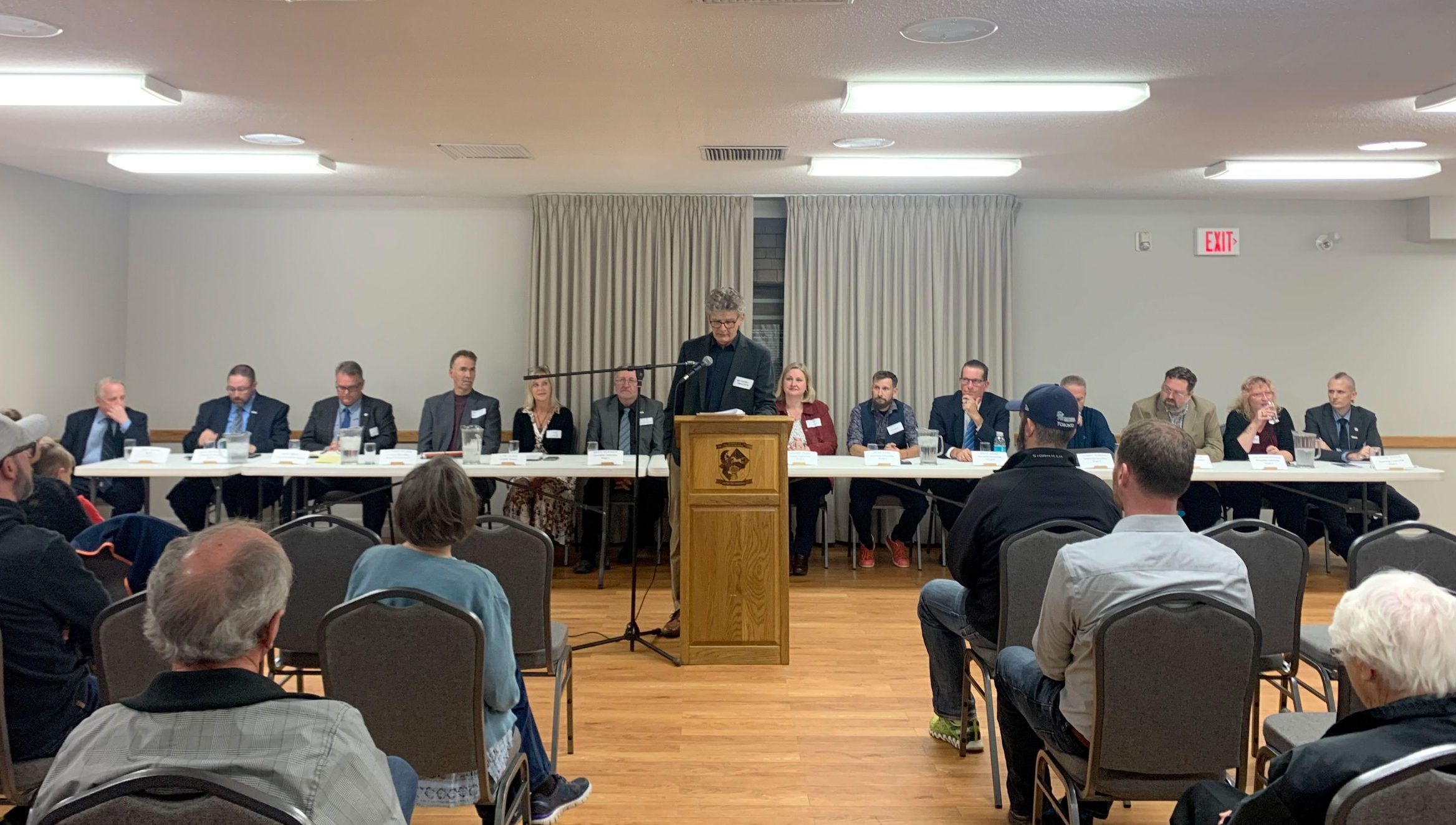 GUELPH/ERAMOSA – The environment, development applications, small-town growth, road conditions, taxation and crime were just some of the issues raised to Guelph/Eramosa candidates during an all-candidates meeting on Sept. 29.

About 40 people attended the meeting, which was hosted by the Guelph Horticultural Society at the Marden Community Centre.

The discussion began with introductions from school board trustee, township and county councillor candidates, followed by a Q&A portion with electors.

One the first topics discussed was the environment – an issue raised by a member of the public concerned about climate resiliency and future impacts on infrastructure.

Acclaimed Mayor Chris White noted the county has a committee dedicated to addressing climate change and is embedding it into all planning processes going forward.

“Certainly the 100-year storm, the culverts, the bridges, everything we’re looking at,” he explained.

“Of course, there are money restraints and so forth, so we can’t do everything, but we’re well aware of what’s going on,” White added.

“There’s a lot of legislation so we’re doing what we can – it’s front and centre.”

“I understand the value of a circular economy, and this is part of the thinking at the county level,” Bulmer said.

Incumbent county Ward 8 candidate Doug Breen reiterated the county takes climate change very seriously, noting the importance of investing in committees like the environmental committee, which he said has already had a large impact.

“We’re designing culverts for the worst possible storm that we could get so we don’t get the kind of flooding that we’ve had in the past,” he explained.

“At the county level, I can speak with great certainty that they take the environment very, very seriously,” he added.

“They’re working very hard to be as sustainable as we possibly can.”

Breen continued, “We’re constantly trying to work towards the goal. It doesn’t happen overnight, we didn’t get here overnight, and we’re not going to fix it overnight.” 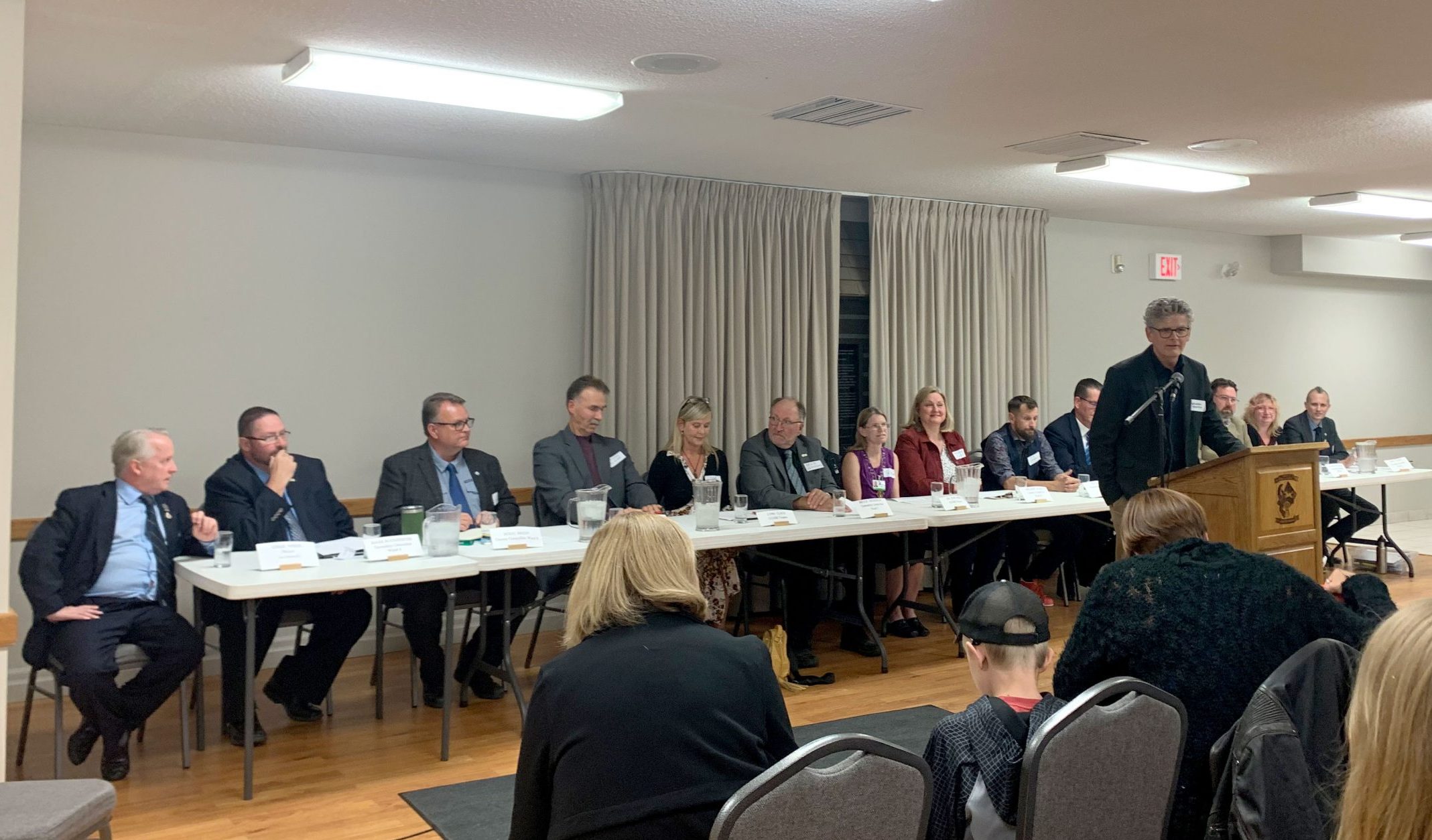 Fellow Ward 8 candidate Melanie Flake said she’d like to see most, if not all, of the county’s decisions put through an environmental lens.

This, she explained, means making goods and services more accessible by bringing more businesses and resources in locally to avoid out-of-town travel.

“We can just drive in off the street or walk down the block,” she explained. “Just small little changes like that if we have more business resources locally.”

Township Ward 1 candidate Philip Mullis said he would support anyone in the community putting forward green initiatives, “whether it be for energy, for eating, for growing your own food.”

Ward 2 candidate Corey Woods, who’s seeking re-election, added “if you’re going to be a good steward in your personal life, you also have to do that at the township.”

He pointed to a recent example of the township reviewing a deteriorating culvert at Marden Park.

If the township does nothing, he explained, it stays as is, but if they remove it and put in an open bottom culvert it may cost more money, but the trout will be able to get through.

“That’s the struggle that we always have with the township,” Woods explained. “We can replace it with the regular culvert that doesn’t necessarily help the trout, or we can get an open bottom culvert and continue to see the flow of the river.

“You’re always going to have this need to be fiscally responsible, but you also have to do well for the environment.”

During the Q&A period, one resident raised concern over agricultural lands and lowering of the tax base for farmers.

White said, as with everything else, there is no simple answer, adding the tax base is not at the township level but at the county.

“It’s been looked at a couple of times, but it’s not that easy,” he said.

“The reality is it just shifts to somebody else … then it’s going on your house and your small shop.”

White added, “And so one of our big challenges is residential taxes are high, because we’ve got limited industrial commercial, and we need to get some more of that.”

Recognizing the assessment on farms has “gone through the roof,” White said if it was an easy shift, the township would make it.

The challenge, Bulmer added, when it comes to a municipality like Minto, where it’s predominantly agricultural, is that there’s no residential tax base to take on the burden.

“So it ends up the farmer taking the whole shot,” he explained.

“My biggest disappointment as a farmer now is that we’re seen as a liability.”

Bulmer added, “That’s why I want to see the province change the system back to the way it was so that farmers are seen again as an asset to local rural municipalities, and my neighbours aren’t subsidizing my income.”

Breen added the county needs to push the government to review the tax base, because even if the county adjusted it, “we’d just be playing a shell game.”

Increasing crime rates was also a topic of discussion for residents and candidates Thursday evening.

Mullis first brought the topic up during opening introductions, stating “right now we have a lot of crime creeping in from the city.”

The topic was raised again during question period by a resident asking candidates, specifically Mullis, to elaborate on what they would do to address the issue.

Mullis responded he would be advocating to the county to try and get more enforcement placed in Guelph/Eramosa but he doesn’t think “throwing more money” towards it is necessarily the solution.

“We just need more focus out this way,” he said.

“We have a lot of encroachment coming from Guelph this way and it needs to become addressed as a community and with various police enforcement to get more activity out here.”

“They’re there,” she acknowledged. “But not in Rockwood or the surrounding area because they’re in Mount Forest and everywhere.

“The OPP doesn’t just do our area, especially in the evening.”

Breen noted the county as a whole has a lot of officers and it spends a lot of money on those resources.

“The truth is, we have a deployment issue,” he said.

“And one of the things that has been done fairly recently is the officers were spending far too much time at the detachment doing paperwork.”

He said there’s been as shift recently to move more non-uniform officers into those roles, to allow for more bodies out in the field.