The move followed a province-wide search.

A press release on his hiring states Schwendinger has a wealth of rural municipal experience having spent nearly 20 years in the sector. 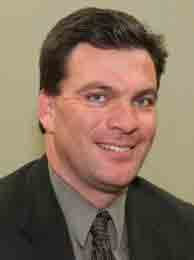 He began his municipal career as manager of public works in Perth East Township and for the past 14 years held the position of CAO for the municipality.

Prior to working in the municipal sector, Schwendinger was a project manager for a Waterloo-based engineering firm.

He completed the Municipal Leadership Program from the Ivey School of Business and graduated with an Honours in Civil/Resource Engineering Technology from Seneca College.

In 2018, Schwendinger was elected to serve as president of the Ontario Municipal Administrators Association, the professional development association for Ontario’s CAOs and city managers.

“On behalf of council and the community, I want to welcome Glenn to Puslinch. He has a demonstrated track record and I know he will provide great advice to council and leadership to our staff,” said Mayor James Seeeley.

“I am grateful for the confidence shown by Mayor Seeley and council and I am excited to be joining the highly respected team of dedicated staff at the Township of Puslinch. I look forward to working together with council, staff and an engaged community to provide exceptional services for the residents and businesses of Puslinch,” said Schwendinger.

Prior to passing the bylaw councillor Matthew Bulmer said he believed it deserved some discussion.

He noted that during the process of hiring the interim CAO, one of the duties for that person was to find a more permanent replacement.

“I think in that regard, the interim CAO (Patrick Moyle) has created a challenge for us by placing quite a suite of highly qualified candidates.”

He thanked Moyle for his work in attracting “a much larger group of exceptional candidates than I was expecting.”

“We learned through the process by listening to all the candidates, to you and our staff as to how critical the CAO is in shaping the feel of the municipality and how the residents experience it.”

Councillor Jessica Goyda added “it was quite an experience to go through the process interviewing the canadidates.

“In the end, I think we are going to come out a lot better for it … I look forward to this new chapter in the township.”

Mayor James Seeley noted his long conversations with Moyle and his work.

Moyle added that when the township had reached the three final candidates “all three commented to me that one of the reasons they were interested in the job was the way council behaved at their meetings and the way council interacted with staff.”

Moyle noted “unfortunately Puslinch council’s behaviour is not the norm of business in many municipalities these days.”

“All the candidates, the finalists in particular, spent hours watching reruns of council meetings.”

“Either they have no life, or they were purely interested in what they were getting themselves into.”

Moyle told councillors all three of the final candidates told him that “as a result of watching those meetings they were interested in the position … because of you behaving in a rational, normal way and treating staff and each other with respect.

“That is what really impressed them. That helped attract a lot of really good candidates for the position.”