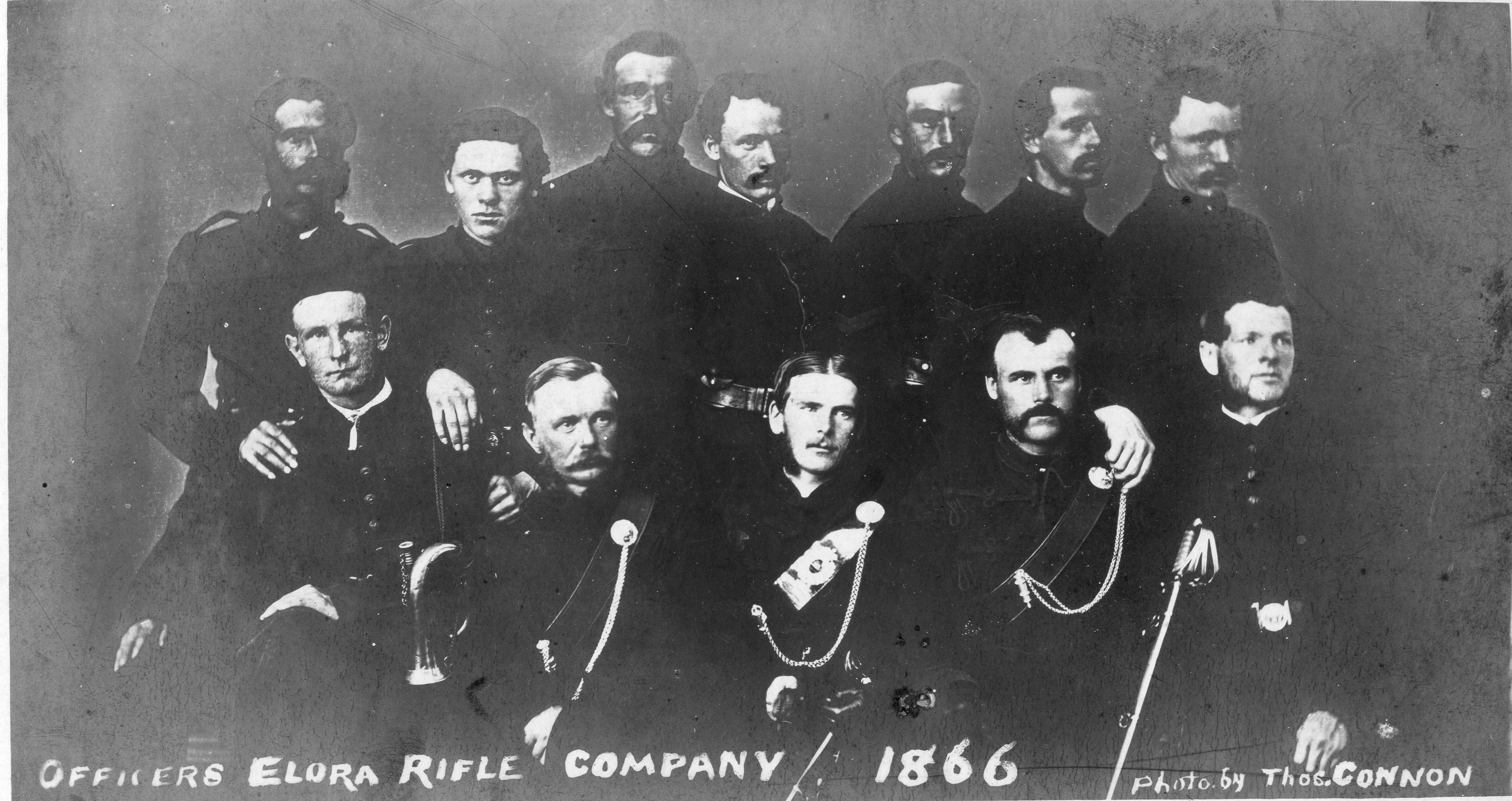 Officers of the Elora Rifles - This photo was probably taken after the officers’ return from Sarnia in 1866. Not all can be identified with certainty. In the front row are bugler Andrew Spalding, Capt. Charles Clarke, Lt. Malcolm MacGregor, Ensign William Leech and Sgt. Alex Johnston. The rear row includes Sergeants Robert Simpson and David Ritchie, and Corporals Robert Tribe, Frank McFarlane and Thomas Farrow. Wellington County Museum & Archives, Ph 33493

(Note: This is the conclusion of an account of the 19th century military in Fergus and Elora.)

The last column concluded with the return of the Elora Rifles in May 1866 from a six-week patrol in the Chatham area.

The men had barely settled back into their regular lives when a second call came on June 2. There were reports of a major buildup of Fenians and their supporters in the Port Huron area.

The men assembled early on June 2 and departed by wagon for Guelph, where the Grand Trunk Railway took over for the trip to Sarnia. At Guelph they met the Fergus Rifle Company, which was also being sent to Sarnia.

It is appropriate here to back track a little for a look at the Fergus Company. Curiously, very little of the history of this unit has survived. This fact has frustrated historians, including Hugh Templin and Dr. A.E. Byerly. Templin expended much effort in a futile search for information. Even the Fergus newspaper contains very little. Templin attributed this to the fact that editor John Watt was a member of the Rifles, and when the Company was on active duty the editorial content suffered very badly.

The Fergus Rifle Company predates that in Elora. It was organized, probably early in 1861 (Byerly thought it might have been 1860), with Alexander Harvey of Kinnettles as Captain and H.T. Strathmore as Lieutenant. Strathmore, who had military experience, helped organize the Elora Rifles.

Through the early 1860s the Fergus Rifles seem to have been less successful than their Elora counterpart in holding regular drills. There was also a continuous turnover of officers: Capt. John A. McMillan replaced Harvey by 1864. Later that year, when a military draft was authorized, the Fergus Rifles finally achieved its authorized numbers. Not until the spring of 1865 – when fears of a full-scale American invasion seemed possible – was there a serious commitment to the Fergus Rifle Company.

The general anxiety in Fergus was further agitated by rumours that Fenians would attempt some sort of raid on St. Patrick’s Day. Fergus had a sizable minority of Irish in the 1860s, and they had not yet become well integrated into the community. Fear and rumour assisted recruitment efforts, and by April 1865 the Fergus Rifles had a substantial and committed membership.

Through the rest of 1865 and into 1866 the Fergus Rifles drilled regularly, occasionally with the Elora Rifles. The Fergus Rifles, now under the command of Captain Robert Lingwood, were not called up for the April 1866 assignment to Chatham. They received notice of their assignment to Sarnia the same day as Elora.

The trip to Sarnia proved uneventful. Having drilled a number of times together, the Fergus and Elora companies got along well. When they arrived at Sarnia, they encountered turmoil.

No one had given much thought to accommodating the hundreds of soldiers in town. The first task was to find food. Fortunately the weather was warm.

Tents soon arrived, and military authorities achieved a measure of organization. To keep the men occupied the officers conducted daily drills. The major problem was a lack of reliable information. No one knew the size of the force assembling in Michigan, or even if there actually was one. Tensions ran high: there had already been a skirmish with some Fenians, the so-called Battle of Ridgeway.

While on patrol, Sgt. Alexander Johnston of Salem believed he saw two small boats signalling someone on shore, but no one was apprehended.

Soon units of the United States Army arrived in Port Huron, to discourage any assembly of Fenians and prevent any border incidents. In 1866 the U.S. government had many problems to deal with. Support for a takeover of Canada, so common a year earlier, had largely vanished.

To help dispel tensions, U.S. General William Tecumseh Sherman visited the Canadian troops and chatted with the soldiers, including members of the Fergus and Elora Rifles.

After two weeks the authorities were convinced that a major incursion would not take place. They sent home a majority of the men by June 20, but the Elora and Fergus Rifles stayed longer.

Meanwhile, back at home, the military spirit reached a new height. New units of volunteers formed: a rifle company in Pilkington, and an infantry company in Elora. Robert Simpson organized a rifle company in Salem, and in Alma some volunteer farmers started to form a cavalry company. None survived more than a couple of months.

The Elora Rifles returned home on July 5, and the Fergus Rifles on July 17. Elora council declared a public holiday for July 20. Utilizing volunteer contributions, Elora hosted a large picnic for the returning volunteers. The Fergus Rifles attended as guests, munching sandwiches and cakes to music supplied by the Elora and Salem Brass Bands.

Yet another militia reorganization took place later that summer, which resulted in the creation of the 30th Wellington Battalion. Charles Clarke received his second promotion of 1866 when he was elevated to Major. Another promotion, to Lieutenant Colonel, came a couple of years later.

As part of the 30th, the Elora Rifles went to Thorold to train in September 1866. Here the company suffered its first casualty. Sylvester Dalby contracted pneumonia. He was taken back to Elora. He died a few weeks later at age 24.

The events of 1866 firmly entrenched the volunteer militia into the fabric of local communities. Each summer for the next half century the men turned out for a training encampment which normally lasted a week – sometimes more and sometimes less. Some years the Elora Rifles travelled to train with other units.

For many of the men it was an annual vacation, a chance to get away from work and family for a few days. Occasionally there would be problems with employers, who did not care to have key workers away. In some years the encampment was held in the Elora area. This gave local merchants a chance to bid for the supply of food and other necessities.

Another side of the militia was the social one. In both Fergus and Elora the annual ball became the major event of the social season. The first in Elora took place in February 1867. It set the tone for the rest of the century. Officers, out-of-town guests and prominent local people attended and danced to the melodies of Spalding’s Quadrille Band (in uniform, Spalding was the company’s bugler). The assemblage sat down to a supper at midnight, and the festivities continued to 6am.

These balls were snobbish events. Rarely did more than a half-dozen of the enlisted men attend. Some years there were none. A commission in the volunteer militia became a desirable social asset. Soon Ontario rivalled Kentucky in its profusion of colonels.

After the perceived danger to Canada subsided, the military function of the militia became secondary.

The experience of the 19th century continued into the 20th. Local people continued to have little interest in the military until a real threat appeared.

In both World Wars they became motivated quickly, volunteering massively and willingly.

*This column was originally published in the Fergus-Elora News Express on April 8, 1998.