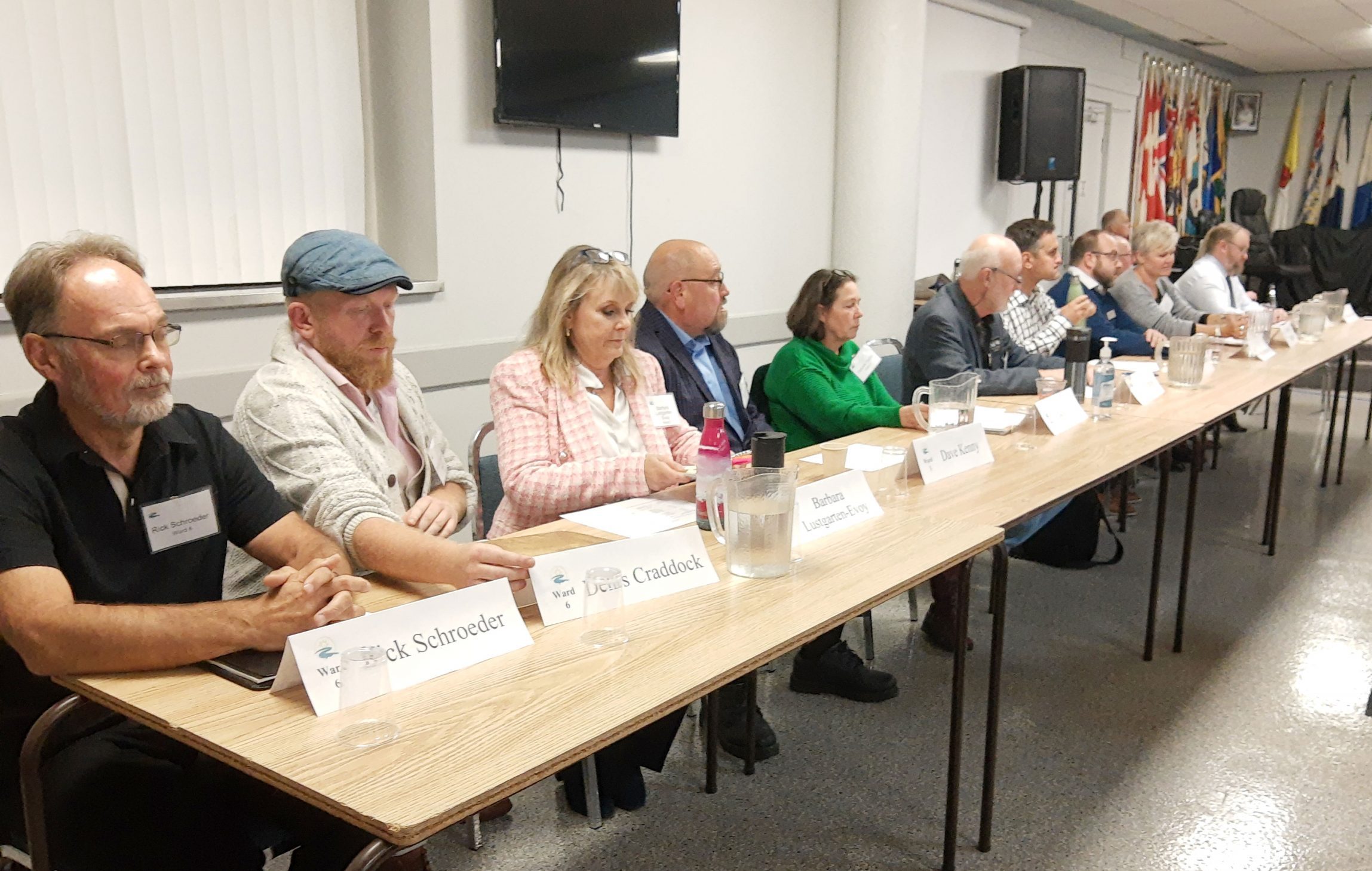 Candidates prepare for the meet-the-candidates session at the Fergus Legion on Sept. 27. Photo by Joanne Shuttleworth

FERGUS – With just four minutes to win over voters, candidates in Centre Wellington’s municipal election pulled out the charm and humour and tried to demonstrate they know their stuff at an all-candidates meeting on Sept. 27.

And while it was not a debate, the three mayoral candidates came closest to controversy.

He said there are zero rentals available in Centre Wellington, 85 Airbnb’s, and 21 development proposals waiting for approval.

Of those, only two are for rental apartment buildings and he wondered aloud why they languish in the queue when rental properties are in such high demand here.

“There are two apartment (proposals) sitting in the queue,” he said.

“They may have issues but we need to deal with them now. It doesn’t matter if we have an industrial park if people don’t have a place to live.”

Neil Dunsmore said a community planning permit system – a system that clearly spells out height, density and permitted land uses in designated areas and is developed with community input – is the way forward.

“It gives the power back to you,” he said, adding this is how to get the right mix of housing in Centre Wellington. “I will work on this on day one.”

Dunsmore said the township has an asset management plan that will stabilize taxes over the next 25 years and that is a path the township needs to stay on.

The three mayoral candidates, at the end of the table, ready themselves for a meet the candidates session at the Fergus Legion on Sept. 27. From right: Bob Foster, Neil Dunsmore and Shawn Watters. Photo by Joanne Shuttleworth

“The community permit system will kick open the door to urban sprawl,” he said.

“Do we want to conserve or destroy our small-town feel?”

“The mere existence of an asset management plan will not stabilize taxes,” he said.

The meet-the-candidates event was hosted by the Centre Wellington Community Foundation at the Fergus Legion and attracted about 300 people eager to meet the candidates running in their wards as election day approaches.

Community foundation executive director Raymond Soucy said the organization put out an online survey to identify the issues the community see as important.

Sustainable growth, affordable housing and protecting the environment were the top three.

That information was shared with candidates and it was their choice to address them or not in their statements.

Lisa MacDonald has governance experience and called herself an “authentic leader.”

While she agreed the survey identified the top issues, Ward 1 has its own distinct issues, she said.

“Most of the wells are in Ward 1,” she said, noting as the township grows, Centre Wellington will need to ensure there is enough clean, safe water for residents.

Parking is also an issue in Ward 1 and MacDonald said Wellington County collects the money from fees and fines and that should be returned to Centre Wellington.

Jonathan Davis said his personal priorities are affordable housing, increasing the number of family doctors in the township, and no tax increases.

“Council should set a budget and work within that,” he said.

Kirk McElwain has been on council for 15 years and noted the accomplishments of council to-date. They include:

He’s pleased his motion to tackle termites in the township has led to a program that is now underway and hopes for more focus on active transportation and becoming an age-friendly community in the next term.

Kim Jefferson ran and lost to McElwain in 2018.

Since then she has thrown herself into work that will make her a better councillor this time, she said, such as sitting on the economic development and community services advisory committees, Zone 4 tourism committee, and chairing the Fergus BIA.

“Sitting on these committees, I have become more aware of the issues in Centre Wellington,” she said.

Eric Nealson said there’s an imbalance between what the township does for tourists and what it does for residents, and he’d like to remedy that.

“We see money flowing into the community but there’s not a lot of community engagement,” he said.

Nealson would like to see more recreational activities for kids, especially for girls, and more money going into trails.

He said he’s a team player who can work with other councillors and staff if elected and will also consider the will of his constituents.

“People didn’t think that happened with the last council,” he said.

While he does travel far and wide as owner of Red Car Service, Neil Armstrong joked he is not the famous astronaut.

He acknowledged growth, infrastructure and water are complex issues, but a divisive council last term was the biggest roadblock to addressing those issues.

“Without collaboration there will only be more delays and bad decisions,” he said, adding he takes a team approach, works collaboratively and with integrity.

James Mantelos said inflation is putting a strain on residents and to combat that he would advocate for a freeze on municipal tax increases and building permits.

He’d like to see co-operative housing and rent-to-own options as a way to combat the housing shortage in the township and thinks public transportation is a growing need.

The township ran a shuttle service for tourists this summer and should pilot a similar service for residents throughout the year.

He said this election is an opportunity to vote for councillors who will work together and listen to constituents.

Trafford noted municipal zoning bylaws “are years out of date” and that active transportation and heritage preservation are high priorities for him.

He said he would hold regular town halls in Ward 3, “so we are continually under review,” he said.

And while housing is “essential to a healthy community,” she doesn’t like that property taxes continue to rise “while developers get millions of dollars in rebates.”

Dave Kenny identified himself as “the guy at the liquor store” who didn’t like how council behaved last term.

“I’m just an ordinary citizen who wants everyday concerns taken [seriously] at the table,” he said.

Kenny said he thinks the township should allow granny flats and other forms of small-scale housing initiatives to increase the supply of housing quickly.

He added some land in the business park should be reserved for affordable housing options.

Barb Lustgarten-Evoy said she’s running for a council seat “because I believe it’s my duty.”

She said the township needs to look at higher-density housing and infill to solve the housing shortage.

She too is concerned with rising property taxes, water, preserving agricultural land and keeping the character of the township while accommodating growth.

“I will vote for the cause at hand and not the person bringing it to the table,” she said. 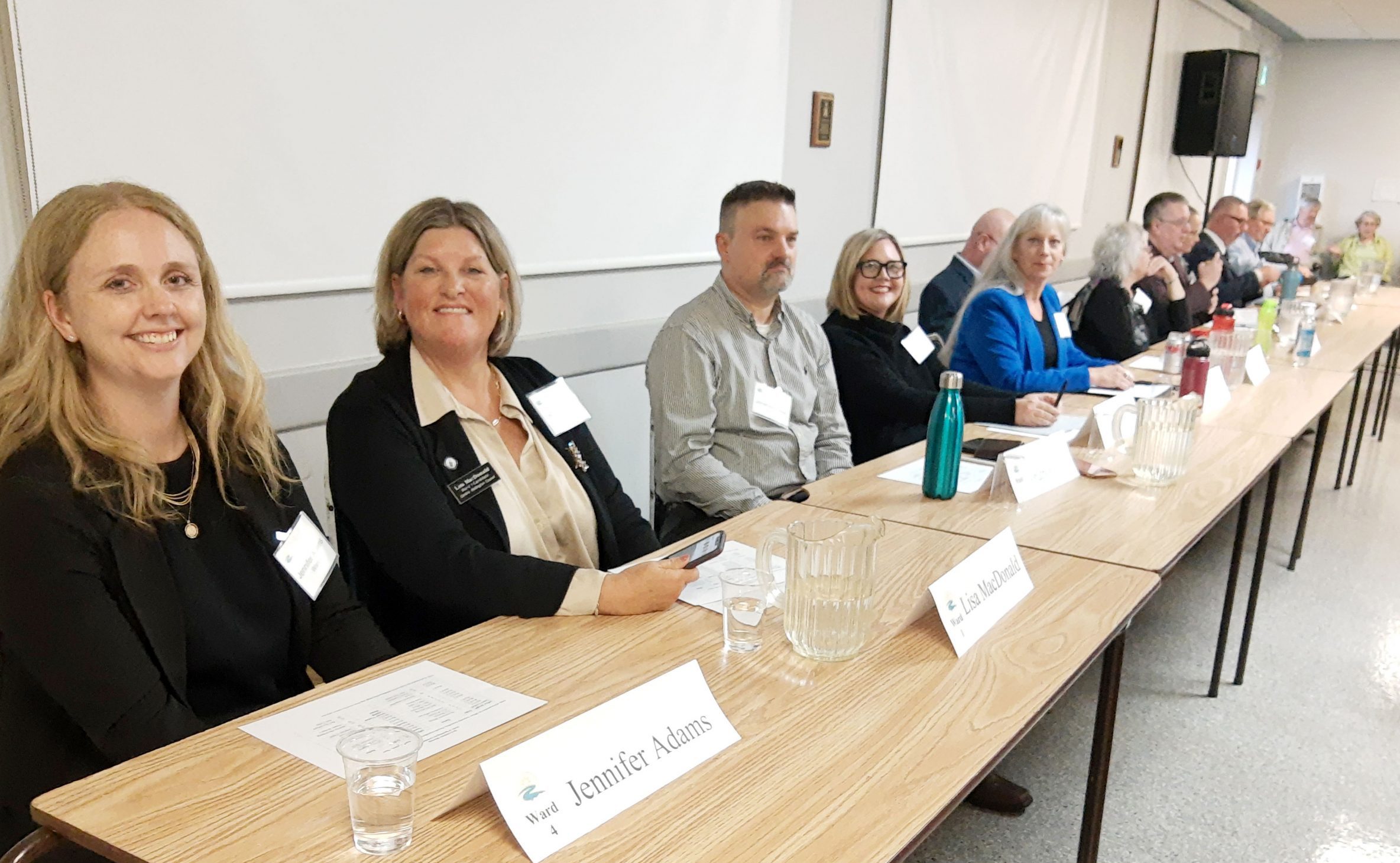 Candidates sat along two long stretches of tables before each stepped up to the mic for their four-minute speech. Photo by Joanne Shuttleworth

The big issues for Adams are attainable housing, labour shortages and programs for youth.

“It’s so important to have programs and services” for youth, she said.

Brock Aldersley, also running in Ward 4, was not at the meeting.

Bronwynne Wilton said we can’t stop growth that’s provincially mandated, “but we can decide where it goes and how it looks.”

Development needs to be “smart, efficient and equitable,” she added.

“We need to look at how bridges and rural roads are selected” for repairs and upgrades, she said.

She also noted Peter Viol has withdrawn from the race, but his name will still be on the ballot.

“So Ward 5, vote for me. The other person doesn’t want the job,” Wilton said.

Denis Craddock said his experience as general manager of the Brewhouse on the Grand will serve him well as a township councillor.

“Municipal government is akin to hospitality,” he said. “You have to listen, learn, and act.”

Craddock said he agrees with the priorities laid out in the community foundation survey and with his experience as a Rotarian and member of the economic development task force, he’s up for the challenge.

“These are big tasks. We must not be divided,” he said.

Rick Schroeder said he is concerned with the health and happiness of residents of Centre Wellington and finding solutions to the high cost of living, housing shortages and food insecurity will help with that.

He’s for high-density housing while protecting agriculture and green lands, while adding bike lanes and public transportation, and “responsible, financial stewardship,” he said.

In Ward 6, Schroeder said he’d like more police presence in Belwood and more attention to speeding.

Randy Vaine pointed to his successes as a councillor in Grimsby as reasons he should be elected here.

“There’s a lot more to the job than people know,” he said.

He added he’s all for protecting heritage buildings and said it’s time for a regional transit system.

Incumbent Mary Lloyd said she was drawn to local politics after chairing the committee that organized events for Fergus’ 175th anniversary.

She’s keen to see a hospice and affordable housing built on county lands in Aboyne as well as an Indigenous gathering circle.

“I love this community and I can stand for all,” Lloyd said. 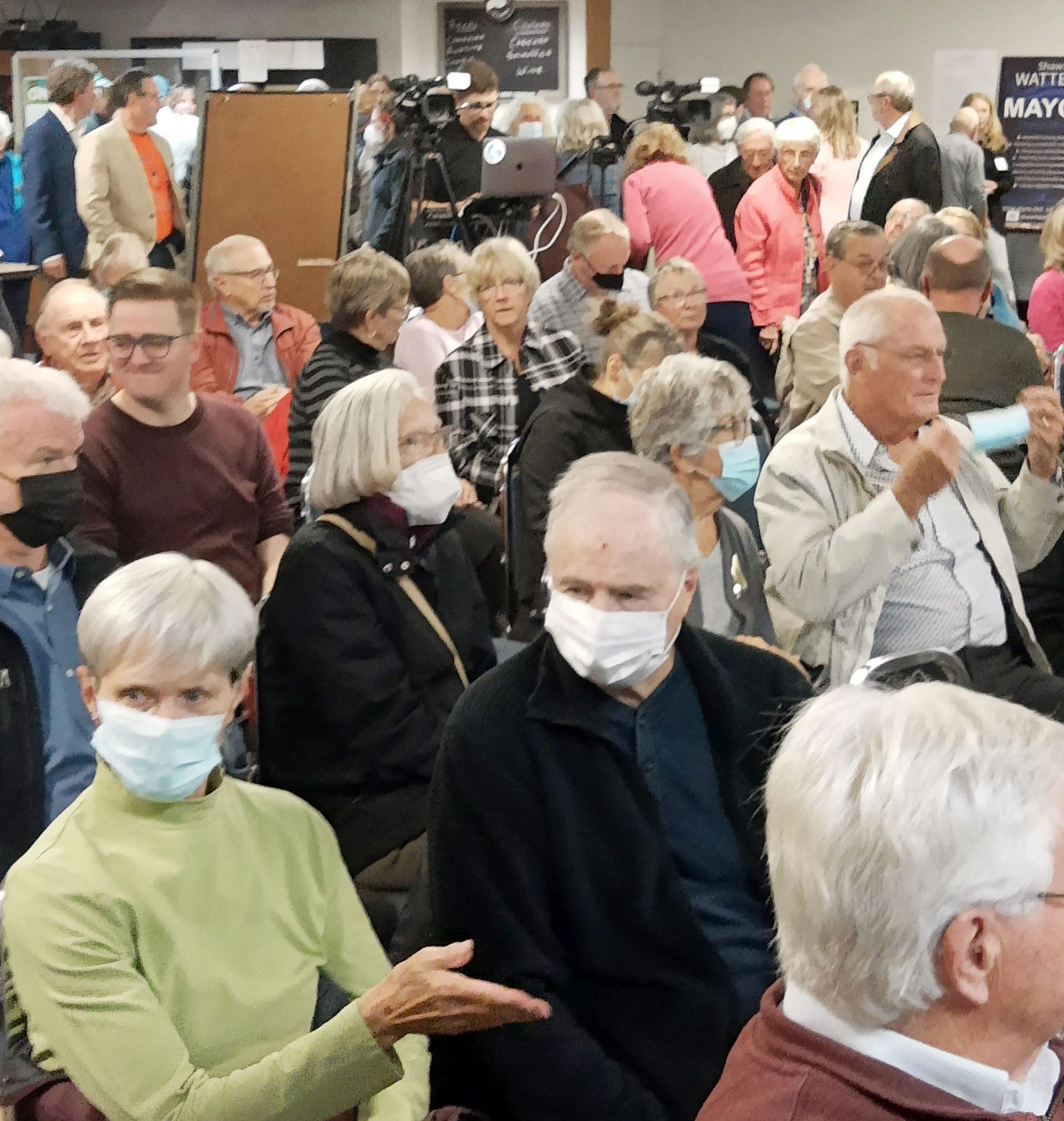 About 300 people attended the meet-the-candidates meeting hosted by the Centre Wellington Community Foundation at the Fergus Legion on Sept. 27. Photo by Joanne Shuttleworth

Melanie Lang said her bottom line is to be “fiscally oriented and socially impactful” and this will guide her decisions if elected.

She said as Centre Wellington relies 100 per cent on groundwater, the county needs to map water sources for all municipalities against roads and development proposals to ensure water is protected.

She noted 80% of the county capital budget is spent on roads and in Ward 6, road capacity is a concern.

“These issues are too big and too important to keep the status quo,” she said.

Incumbent Diane Ballantyne said she’s proud of the work that’s been accomplished while she was in office:

Wellington County recently attained an AAA credit rating “and we had the lowest back-to-back tax increases,” she said.

“We are a healthier, more connected community,” added Ballantyne.

While some candidates were acclaimed, they still had the chance to speak at the meeting.

Ward 4 county councillor Stephen O’Neill said council has given the OPP the tools to monitor speeding, and the green bin and blue box programs will help divert waste from the landfill site.

“We only have one landfill. It’s important to keep that open as long as possible,” he said.

Marina Hanenberg will be the Upper Grand District School Board trustee for the area.

She said she was raised on a farm, where she learned to be practical and ready for anything.

“I’m running because I want to give back to this amazing community,” she said.

The session, with the candidates’ complete remarks, was recorded and is available to watch on Wightman’s YouTube channel and in its weekly programming.

A link to the session is also available at the community foundation’s website at cwcfoundation.ca,