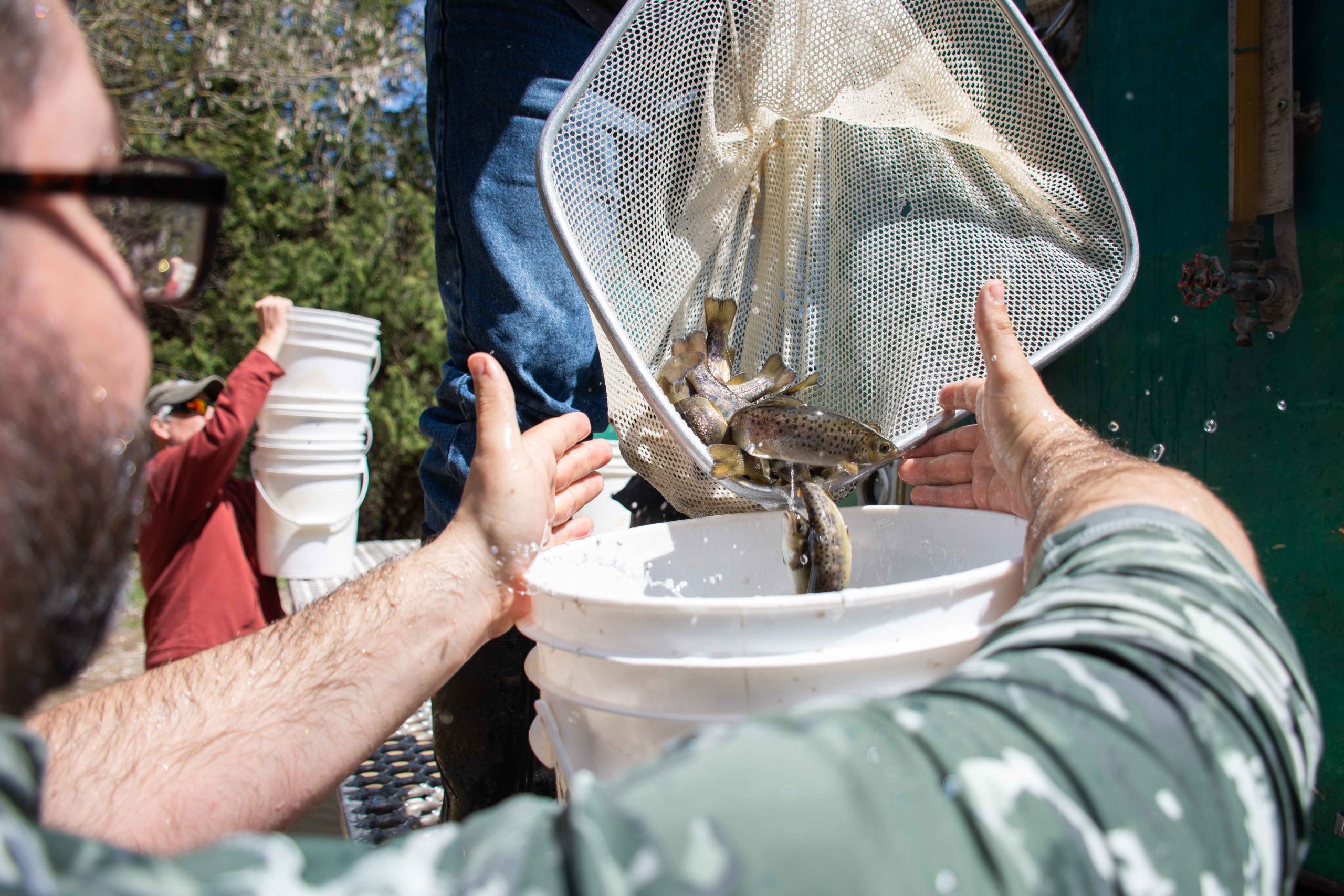 Over three days, Friends of the Grand River volunteers restocked a 27km stretch of the Grand River through Centre Wellington with 33,000 brown trout to bolster a recent population decline and ensure the future of a rich ecosystem. In this photo, Ministry of Northern Development, Mines, Natural Resources and Forestry staffer Julian D’Ambrosio ensures brown trout make it into a pail as fish culture technician Glen Gately dumps the net.
Photo by Jordan Snobelen

CENTRE WELLINGTON – Water sloshes from five-gallon pails carried by Jason King as he manoeuvres through a wooded area found at the end of Gilkison Close, off South River Road.

Beyond the treeline, Elora’s rocky bluffs line the Grand River where three canoes and volunteers sit along a shore awaiting King’s arrival.

Inside the pails are 15-month-old brown trout; their black, brown and red-orange speckles revealed under the bright, mid-day sun.

King pours the fish into a livewell of a canoe as more volunteers arrive lugging pails of brown trout.

The fish – some 7,900 – have made the annual pilgrimage from the province’s Chatsworth Fish Culture Station for the restocking of a 27 km stretch of the upper Grand, located between Belwood’s Shand Dam and the covered bridge in West Montrose.

Since 1995, the Friends of the Grand River, an environmental group of volunteer river stewards, have worked with the province to replenish the prized brown trout and, as of late, understand their declining population numbers.

Once the livewells are restocked, volunteer Rod Murray wades into the river with a bucket, and launches the fish with a swing.

Writhing through a moment of flight, the trout splash into the Grand’s cool water and dart off into their new home.

This year, 33,000 brown trout were baptised in such a way between May 2 and 4 by Friends of the Grand River volunteers. 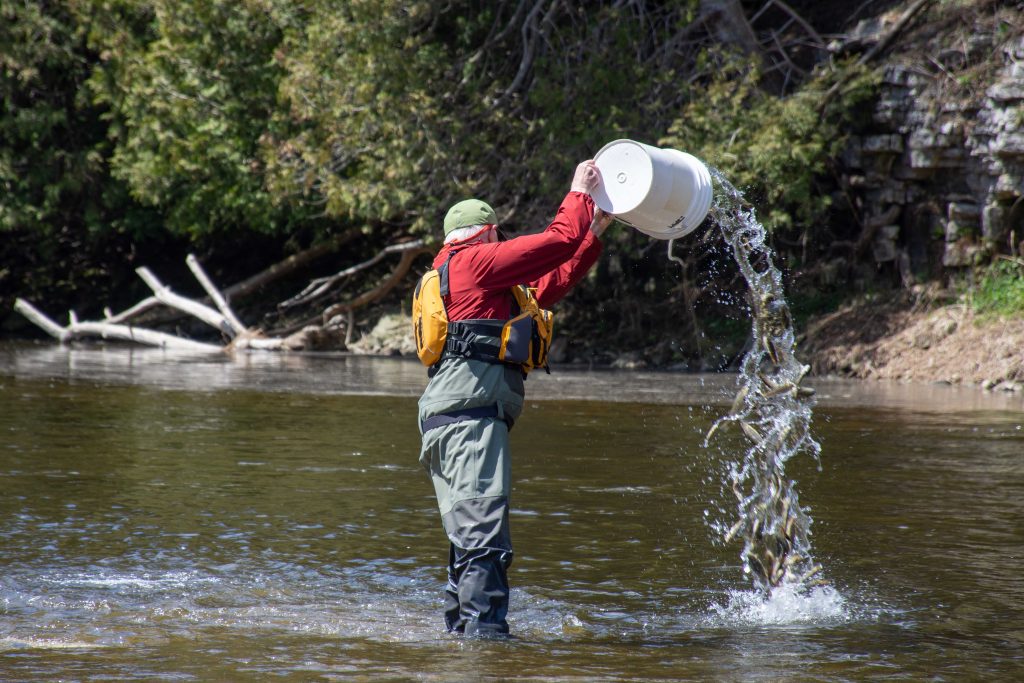 Most of the fish – around 70 per cent – will support a rich ecosystem by becoming food for bald eagles, osprey and herons, and other fish such as walley, pike and bass.

Less than 10,000 remaining brown trout will continue gorging on an abundance of mayflies and crayfish, becoming game for anglers to catch during fishing season, from the end of April to the end of September.

In two to three years from now, most of the trout will grow to be between 13 and 18 inches. Some will reach as long as two-feet – a “hero” catch for anglers, says King.

Some venture from as far away as Arkansas hoping to reel in bragging rights.

The restocking of brown trout is mostly for economic benefit. Friends of the Grand River suggests fishing devotees bring $1.5 million to the local economy. 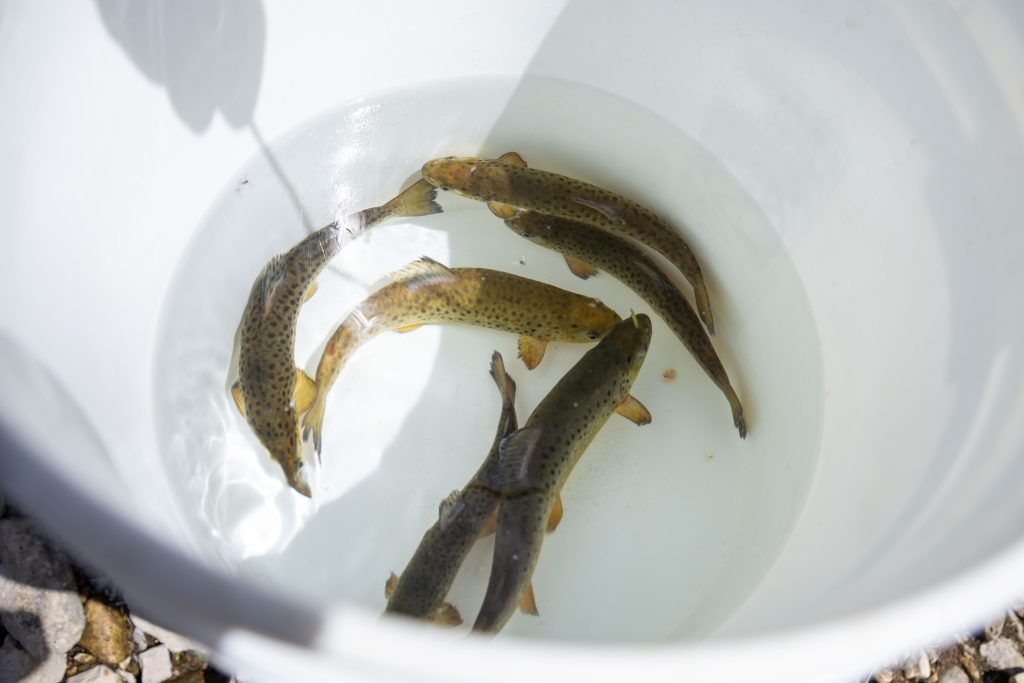 Brown trout, weighing between 50 and 70 grams, swim in a pail before embarking on a new journey into the Grand River. Photo by Jordan Snobelen

King has led the restocking effort for the past five years and says, anecdotally, brown trout populations have declined since the summer of 2017 when a heavy, sudden rainfall caused water to overcome the wide-open Shand Dam.

He and other Friends of the Grand members suspect the fish were flushed downriver, into warmer waters where brown trout – which thrive in clean water between five and 16 degrees Celsius – would have a lower likelihood of surviving. 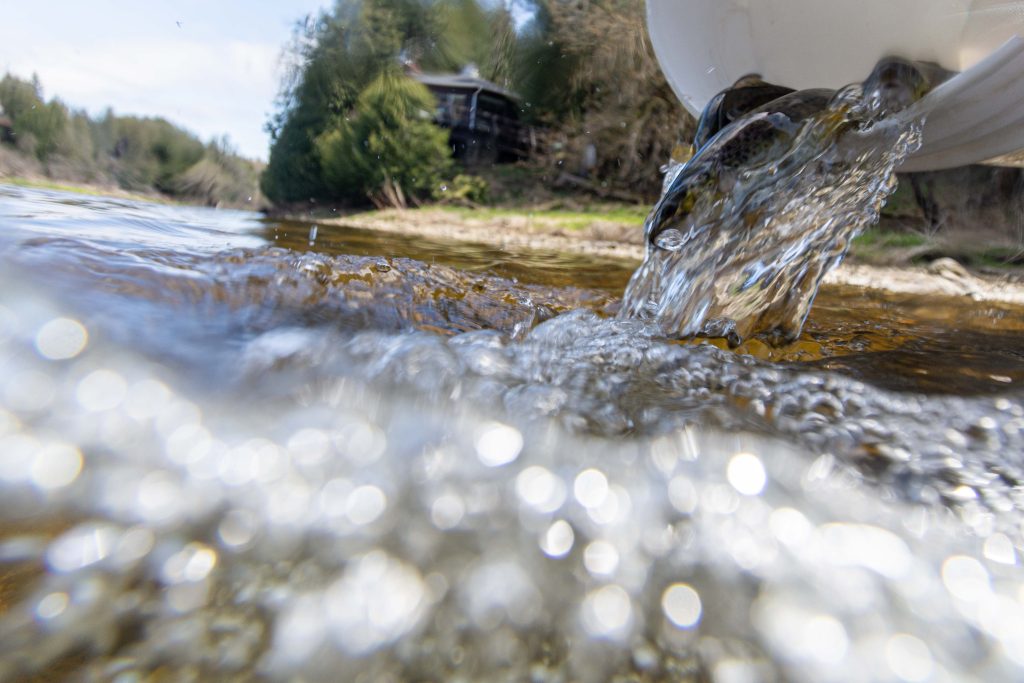 “There is also widespread indication of poorer over-winter survival rates within the trout population,” notes a 2022 Friends of the Grand River action plan.

There are plenty of rods over the river in a season, and the organization also taps anglers to gauge the river’s health, but Voisin cautions the group’s theories and conclusions about what’s going on are unscientific.

Voisin said hard data is being collected over the summer to put science behind sentiment, with the help of students from the University of Guelph, by examining bug life and water contents in the hope of better understanding what has led to the decline, and how the river has changed over the past two decades.

Despite the changes, Voisin said the river “even in its worst years” remains one of Canada’s – if not one of North America’s – top brown trout fisheries.

“Those that were around in the early days really had no idea it would be this wildly successful … it turned into something miraculously special.”

This year, one the group’s action plan calls “critical,” the province agreed to contribute an additional 10,000 fish on top of the 23,000 it typically allots. 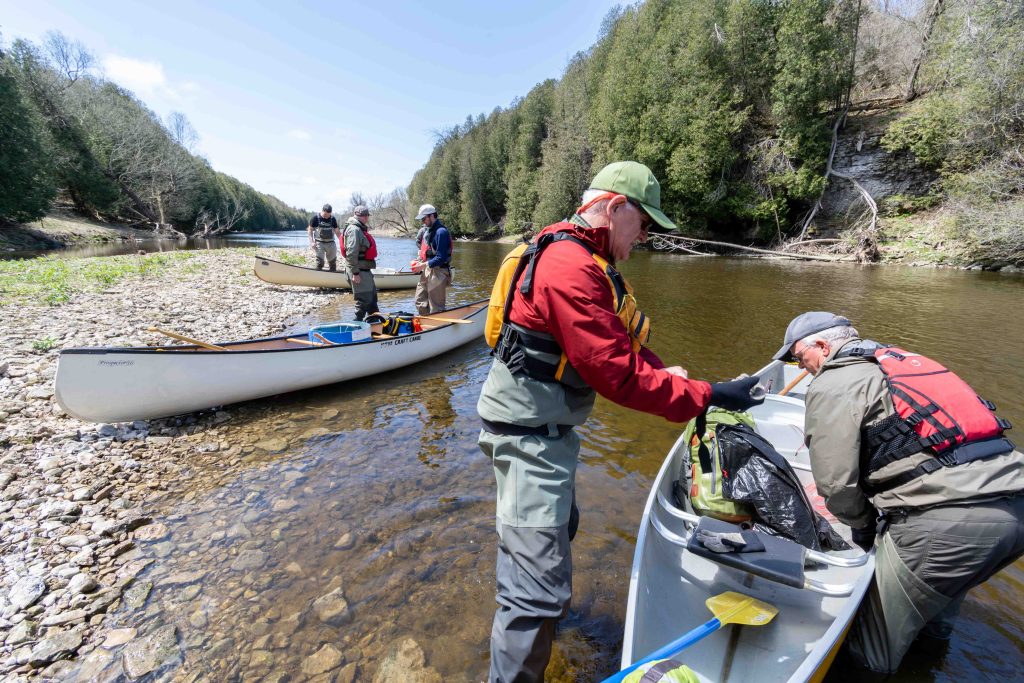 Friends of the Grand River volunteers ready to depart down the river on May 4 after having livewells aboard restocked with brown trout. Photo by Jordan Snobelen

To help spread fish out more effectively, the ministry approved use of canoes and live wells in the upper Grand for the first time since stocking began here.

“It’s been a huge success in my mind,” King remarked, saying this season has been the smoothest yet.

Outfitted with nets, the volunteers scooped the young trout from the livewells and flung them out across the water at 20 strategic points over three days.

“That’s what really makes the success of the survival of the trout – getting them spread out, keeping them away from other fish,” King said, adding the trout aren’t harmed in the process. 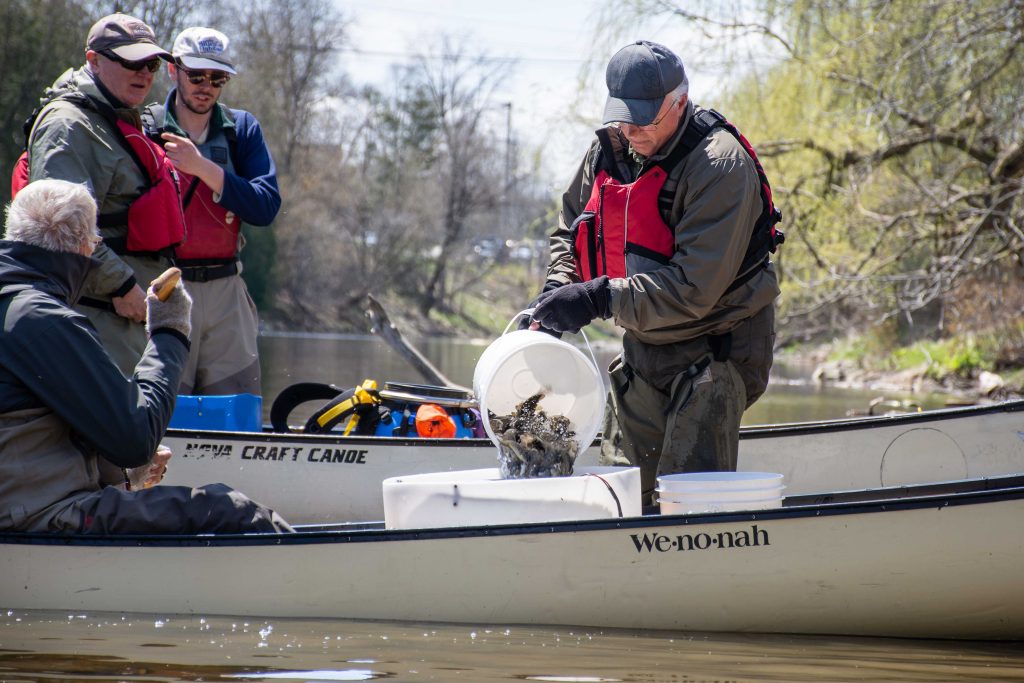 A Friends of the Grand River volunteer replenishes a livewell in a canoe at Bissell Park on May 4. Photo by Jordan Snobelen

By late afternoon the group had arrived at Bissell Park, dispatching the fish from their canoes between a dam and the Metcalfe Street bridge as a lone angler watched the scene from the shore.

King, who volunteers his time to the group when away from work and is an avid fly fisher, hopes to continue “giving back to the system” and keep the river’s legacy alive for generations to come.

“It’s just mind blowing how awesome it is.”