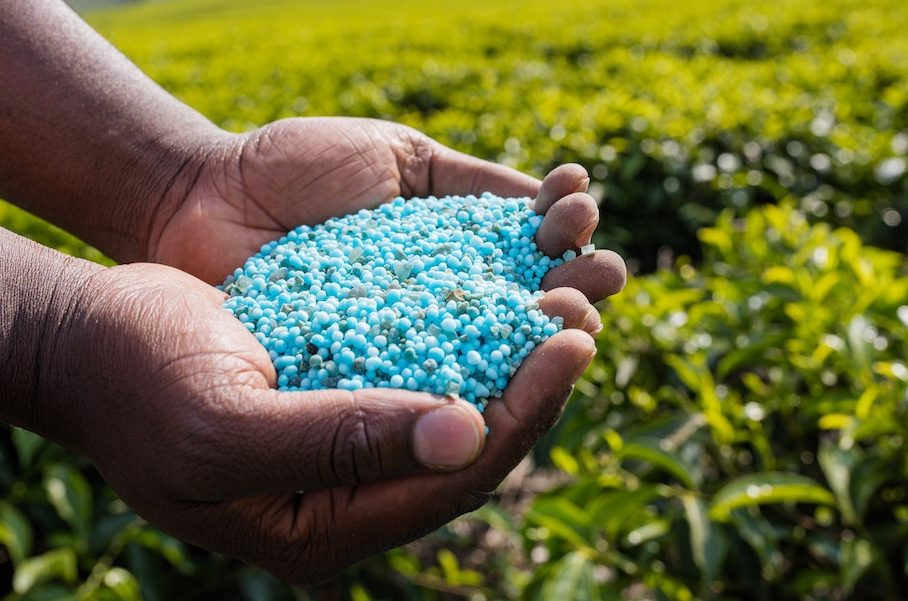 The federal government has set a Canada-wide target for a 30 per cent reduction in fertilizer emissions by the year 2030. Public feedback on how the agriculture sector might meet the target is being accepted until Aug. 31. (Pexels stock image)

WELLINGTON COUNTY – The federal government has set a Canada-wide target for a 30 per cent reduction in fertilizer emissions, or the estimated equivalent of four megatonnes of carbon dioxide, from 2020 levels by the year 2030.

But how that target would be met, or measured for that matter, is the focus of ongoing Canada-wide public consultations, closing Aug. 31.

The feds assert they aren’t trying to mandate a reduction in the use of fertilizer, but rather cut emissions from its use—nitrogen in particular.

Nitrogen is integral to plant growth and linked to yield, but it also creates nitrous oxide emissions, a greenhouse gas (GHG) believed to have more warming potential in a century than carbon dioxide.

Nitrogen unused by plants can also be released from soil as ammonia gas, eventually creating smog, and also turning into nitrate, dissolving into and contaminating waterways and groundwater.

According to an Agriculture and Agri-Food Canada (AAFC) “discussion document,” Reducing emissions arising from the application of fertilizer in Canada’s agriculture sector, Canadian agriculture accounted for about one per cent of global agricultural GHG emissions in 2019, and around 10 per cent of all Canadian emissions that year—the equivalent of 73 megatonnes of carbon dioxide.

By comparison, the oil and gas sector produced 204 megatonnes in 2019; transportation was responsible for 186; and buildings, 92 megatonnes. 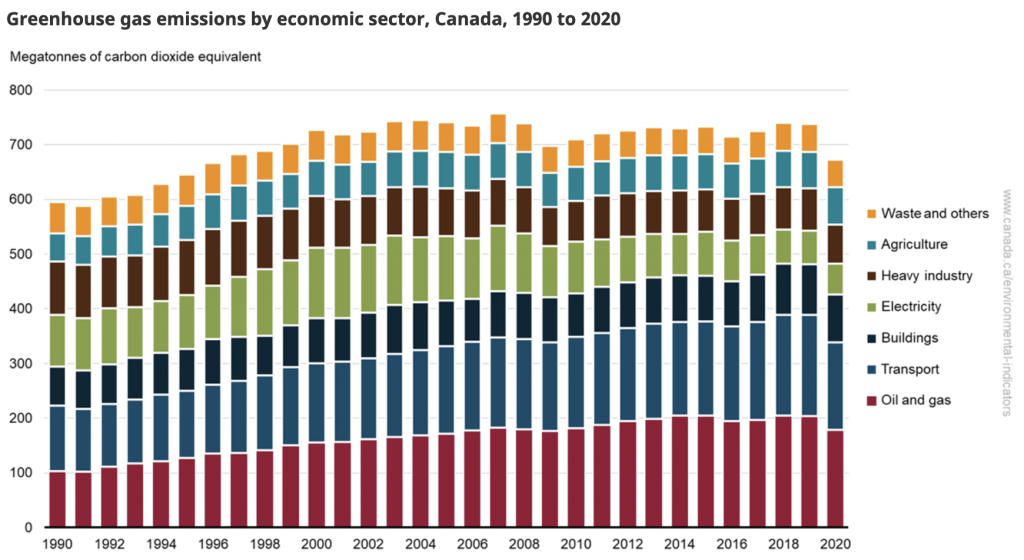 At the top of the worst offender list is methane, believed responsible for the equivalent of 24 megatonnes of carbon dioxide in 2019, compared to fertilizer emissions of 12.75 megatonnes the same year. 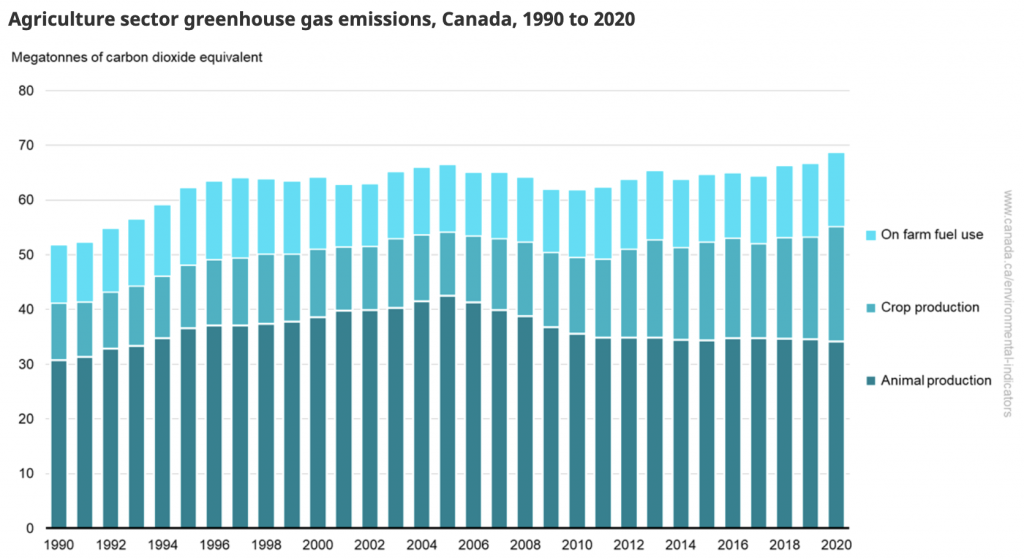 Even so, the federal government is targeting fertilizer as part of a massive undertaking to reach net-zero emissions from Canada’s economy by 2050.

Fertilizers are said, in the discussion paper, to be “responsible for a growing share of overall agricultural emissions.”

Fertilizer use increased by 71 per cent across the country over a 14 year period, between 2005 and 2019, according to a National Inventory Report.

And during the same time, nitrous oxide emissions from fertilizer application “increased by 54 per cent,” according to the discussion paper. 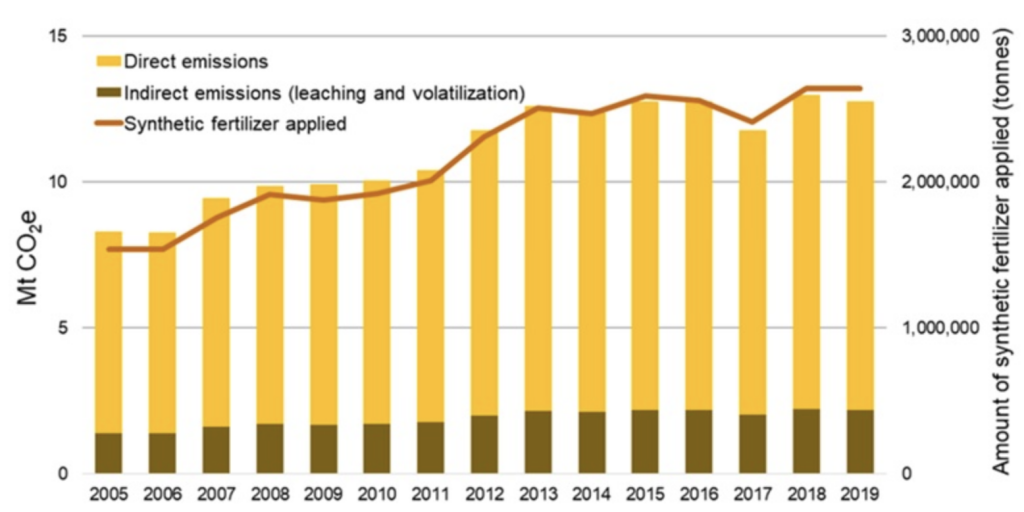 Increased N2O emissions on cropland are driven by the combined effect of a continued increase in area under annual crop production, an increase in the area under fertilizer intensive crops, and an increase in soil degradation which has contributed to carbon and nitrogen losses from soils. As well, the intensity of nitrous oxide emissions per hectare has nearly doubled since 1981 because of increased fertilizer application rates combined with a minimal expansion of total Canadian agricultural area. (Government of Canada graphic)

The goal, AAFC says, is “not to establish a mandatory reduction in fertilizer use” but to “maximize efficiency, optimize fertilizer use” and spur innovation and collaboration.

Guelph Liberal MP Lloyd Longfield, a former member of the Standing Committee on Agriculture and Agri-Food, penned an op-ed published in the Toronto Sun on Aug. 7 calling out the rhetoric of a so-called fertilizer ban.

“I thought that was going politically too far, it gets people riled up,” Longfield explained. “Let’s use the right terminology and have a good discussion about it.”

The government’s goal is to decarbonize the food supply as much as possible, according to Longfield, who said the “Guelph Statement” provides a signal of where the feds are heading on agricultural policy in Ontario next year.

“That’s what we’re basing all of our policy development on,” the MP said.

“It always goes back to: How do we continue to get more and more out of existing land that we have?”

Soil management is the starting place, Longfield said, “so fertilizer has to be part of that discussion.

“I think that between better equipment … and using data effectively, it’s a lot better than just dumping nitrogen on the soil,” he said, adding that overuse of nitrogen in the long-term ends up a costly waste.

“Doing the same thing over and over isn’t going to get us better progress on climate action.” 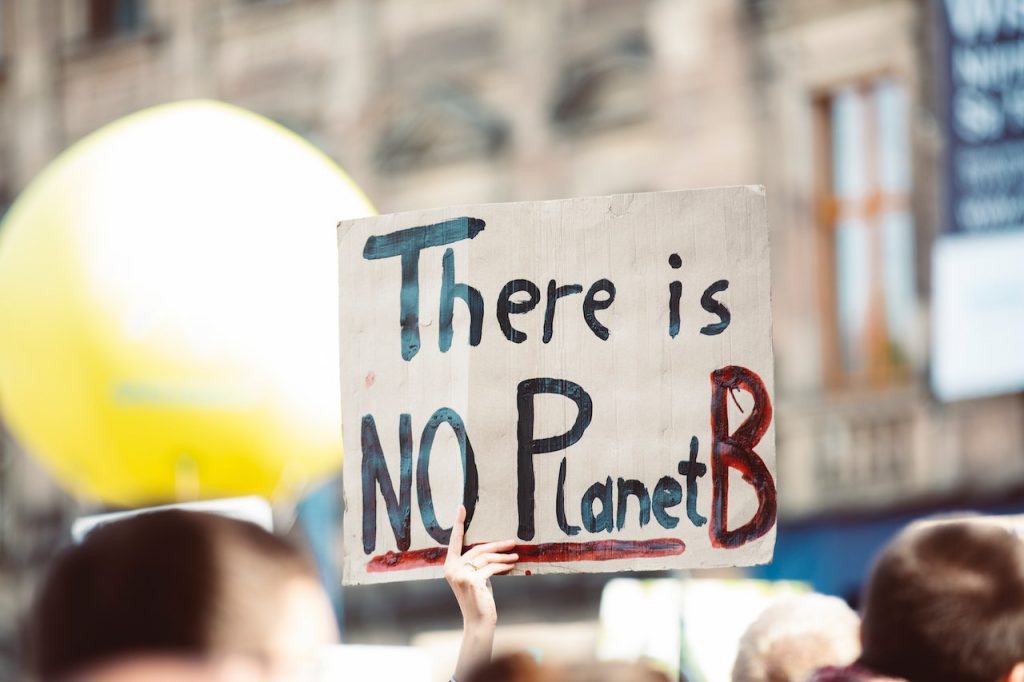 Agriculture Minister Marie-Claude Bibeau has stated reductions are voluntary and that there are no plans for a cap on use.

But Canadian Senator Rob Black, who chairs a standing committee on agriculture and forestry, said the government’s narrative doesn’t appear to check out.

“If we have to reduce fertilizer use or inputs, obviously yield’s going to be impacted,” he said by phone.

“Nitrogen fertilizer is a critical input, so what else are we going to use?”

Black said everyone, including himself, is concerned.

Farmers are well aware of their contribution to GHGs, Black said, and steps have been taken for years to reduce environmental impact—be it cover-cropping, no-tilling practises, or better drainage.

“Industry acknowledges that there is an issue and that they need to play a role … they’re not saying, ‘it’s not us’ … they want to be a part of the solution,” Black said.

Wellington Federation of Agriculture president Janet Harrop said producers have already cut back fertilizer use because of high costs and better application strategies, in an effort to balance out increasing input costs across the board.

“You can go to the minimum requirements of your crop,” she said.

But that means potentially lower yields.

“And if you risk yield, that’s a direct economic hit.”

Focusing solely on nitrogen, Harrop said, is to ignore the complexity of agricultural emissions.

“It’s a whole system piece,” she said, emphasizing that having healthier, resilient soils are paramount to achieving a reduction.

“Even the carbon sequestration [piece] of being able to pull carbon dioxide from the air to help [a] plant grow—that’s all tied together in the foundation of having healthy soils for healthy crops to grow,” Harrop said.

“I think they feel that this is a low-hanging fruit that’s going to be an easy fix, but it’s pretty complicated.”

For one, Harrop says, nitrogen is weather dependent. Eastern Canada leaches more nitrous oxide and applications are heavier, because of moisture.

“The federal government has to have a way to truly measure the nitrogen emissions that come from agriculture,” she said.

Last year the feds began consulting with agriculture industry stakeholders, leading to ideas on how to meet the government’s target, along with concerns related to reduced yields; barriers to adoption; gaps in data collection, methodology, and reporting; and incentives to adopt new technology.

Fertilizer Canada CEO Karen Proud told the Advertiser the government’s target was announced in 2020 without consultation or discussion.

“It just kind of came out of the blue,” she said, calling the move and lack of communication “frustrating.”

“It’s really unfortunate that this was the approach, because it has caused trust issues within the sector as well,” Proud said.

“I think the minister has been trying to really clarify that this isn’t a regulated approach, and she has actually used the words ‘voluntary’ and ‘not regulated,’” Proud said.

And so the organization has also changed its tune (it paid for a 2021 report by Meyers Norris Penny suggesting $48 billion in farm income could be lost because of reduced fertilizer use, setting off alarm bells industry-wide) and become more supportive of the government’s position, now viewing it as “directional.”

Fertilizer Canada is finalizing its own submission to the open consultation, wanting to show government what can be achieved by following long-standing 4R Nutrient Stewardship guidelines—right source, rate, time and place—developed by the organization.

“So, we’re doing the homework for them,” Proud said. “We do believe, quite strongly, that if you implement the 4Rs to a fairly advanced level, we can achieve reduced emissions while still increasing yields.” 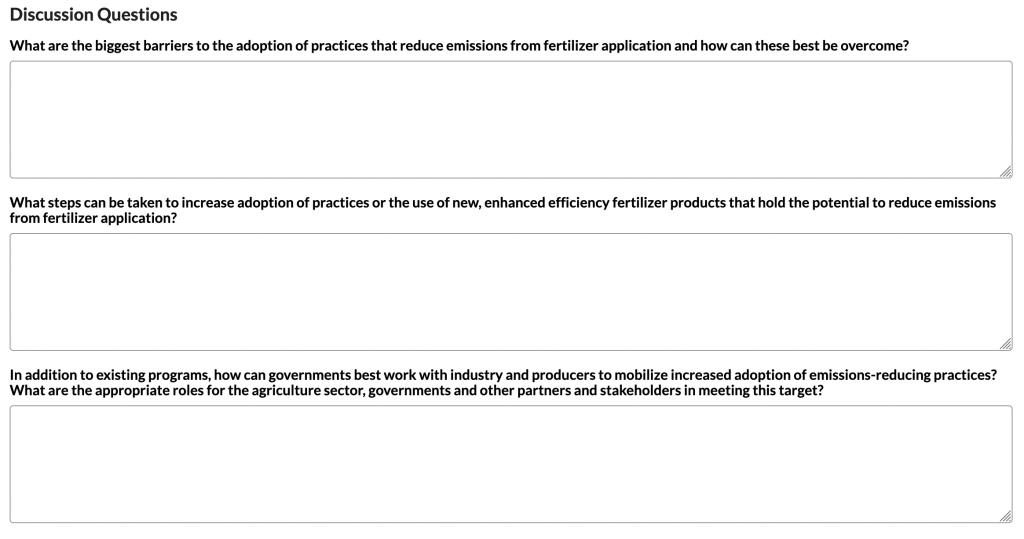 (Screenshot showing a sample of some of the questions being asked in the online consultations.)

But Fertilizer Canada’s 2019 fertilizer use survey suggests under 10% of Canadian farmers have a 4R plan, and Proud said practising its guidelines still would not reach the government’s target.

In its discussion paper, the government makes a case for its “ambitious, but achievable” emission target stating it can be met by adhering to Fertilizer Canada 4R principals, replacing synthetics with manure and compost, improving drainage, using conservative tilling, and enhanced synthetic fertilizers.

AAFC scientists believe the most effective actions include: using fertilizers with urease and nitrification inhibitors, practicing of split application/side dress, and to stop fall application.

After the survey closes next week, AAFC will facilitate a series of technical workships “to hear directly from the sector and bring together scientists, government, and industry experts to discuss opportunities to reduce fertilizer emissions,” AAFC spokesperson James Voldock said in an email.

Following these consultations, AAFC expects to release a “What We Heard Report” in the fall or winter.

The report will outline comments received throughout consultations.

To participate in the survey, visit agriculture.canada.ca or email aafc.por-rop.aac@agr.gc.ca.