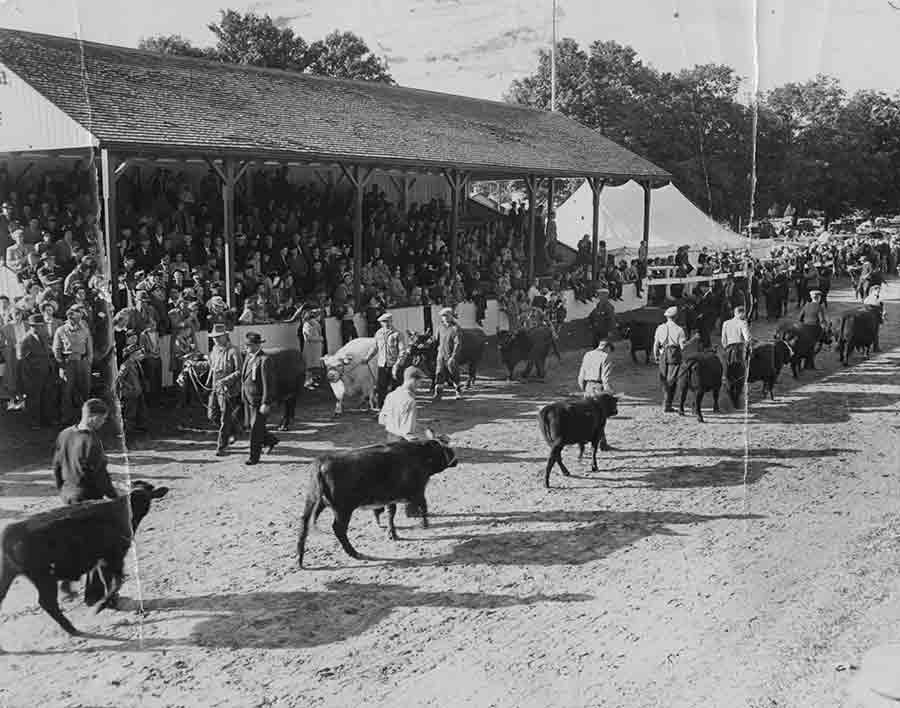 On parade - Beef cattle parading in front of the grandstand at the Fergus Fall Fair, circa 1950. [Wellington County Museum & Archives ph41527]

Last week I took a glimpse back to 1952 and some of the fall fairs of that year.

Agriculture still dominated local economies in the towns and villages in the mid-20th century. It was a time of prosperity and rising expectations. These combined to make the fall fairs of 1952 outstanding successes. Many set new records for attendance and numbers of entries.

Fair organizers today schedule their events over a weekend, to be attractive to people who are working during the week, and to people who do not come from a farm. It is unlikely that the modern fair could survive without significant attendance by non-farm people. The fair has become, in part, a means for the agricultural industry to present itself to the general population, something that was much less necessary 50 years ago.

The modern fair typically has events spread over three days, and sometimes more. The 1952 versions normally spanned only two days, with the bulk of the activity on the second day.

The 1952 Arthur Fair was sandwiched between Drayton’s and Harriston’s, on a Tuesday night and a full day on a Wednesday. Tuesday activities consisted of the placing of exhibits, some of the judging, socializing and entertainment in the evening.

Fair day on the 24th began with a parade, led by the students from the public and high schools, and featuring the Arthur High School cadet brass band and the newly-formed Arthur Pipe Band. The procession led to the arena (built by the Arthur Agricultural Society in the 1920s) and the adjacent grounds.

Wellington County Warden Bill Tilden of Minto, assisted by MPP John Root, opened the fair. The two bands remained on the grounds, and alternated in providing music during the afternoon.

Like most fall fairs then, there were horse races, but with a modest purse of $150. Organizers wanted to put more emphasis on livestock, and completely revised the prize list that year. Officials raised the dollar amounts of the prizes. As in neighbouring fairs, entries for work horses increased, even though fewer and fewer teams actually worked the land. Arthur offered a top prize of $30 for the best team that year.

A special attraction was an exhibit staged by the West Luther Calf Club. For the third year, a pet and hobby show, restricted to those aged 15 and under, resulted in some keen competition among youngsters. A large midway offered rides during the day, and a dance concluded the fair in the evening.

Several visitors claimed this was the best small in fair in Ontario that year, in terms of attractions, organization and community participation. Many farmers regarded Arthur as the best market town in the area back then. The village’s merchants strongly supported the fair. W.A. Walker, president of the Agricultural Society, called it “the best show in years.”

Nevertheless, some people expressed concerns. A few oldtimers thought that attractions other than the agricultural competitions were dominating the fair, and diluting its agricultural orientation.

To others, this was a virtue, not a fault. Rixon Rafter, the editor of the Arthur Enterprise, thought that the social aspect was most important, and always had been: “….every local fair partakes to some extent of the nature of an old boys reunion, a meeting place for neighbours and friends of former years.”

The 2002 Palmerston Fall Fair opened the season, running from Aug. 23 to 25. The 1952 version, on Sept. 29 and 30, closed the fall fair season in north Wellington. Organizers 50 years ago went all out to put on a major event. Almost from its beginning, Palmerston had tried to break away from its total dependence on the railway. The town’s boosters saw the fall fair as a useful tool to help build Palmerston into a regional marketing town.

Like most of the other fairs, the first day, a Monday, featured mostly set up functions. The following day was a virtual holiday in town. Palmerston took particular pride in its fall fair parade, and 1952 saw a huge one. The parade formed up at the high school during noon hour, and marched out a few minutes before 1pm, headed for Main Street. An OPP cruiser (with police chief Albert Cowan as passenger) led the procession, followed by Mrs. Bessie Milne, Palmerston’s outstanding horse woman, riding Golden Lady, a palomino that had won major prizes at the Royal Winter Fair in 1951. The Norwell High School bugle band was next. Students from 14 country schools in Wallace and Minto participated.

The parade included dozens of floats, decorated cars, children with decorated wagons and kiddie cars, and novelty participants, all competing for prizes. So long was the parade that the bugle band had reached the fair grounds about the same time as the tail end left the school grounds. The Palmerston Legion pipe band brought up the rear of the procession.

Palmerston Observer editor Art Carr was delighted to receive a prize for the float entered by his paper, a tugboat called “S.S. Observer.” Patsy Brown took another prize for her decorated bicycle, and S.S. 11 of Wallace impressed viewers with their float, entitled “Arctic Exploration.”

Fair organizers were delighted by the participation of Palmerston’s merchants and businesses, most of whom entered floats or vehicles. Art Carr wrote that he believed it was the biggest parade in Palmerston’s history, and certainly the biggest he had seen since coming to town almost 20 years earlier.

Intense advance publicity brought out a huge crowd, and attracted the interest of several daily papers. The Kitchener paper ran two photographs, as did the Mercury in Guelph, and the London Free Press, which in 1952 circulated in Wellington County, headlined its district page the next day with a Palmerston Fair story.

Renovations over the summer had improved the fair building. The old gouged and spongy wood floor was gone, replaced by concrete. The fair board had plans for more improvements and construction. As well as the competitive entries, those attending viewed the exhibits put up by Palmerston’s merchants. Implement dealers had the newest models on display outside.

As in other fairs in the area, the heavy horse section was particularly strong, attracting entries from far beyond the county’s borders. A good field entered the horse race, though the purse was only $180.

Early in the day it was evident that the crowd would be a record one, as an endless flow of people streamed through the King Street gates. The refreshment booth, staffed by the women of the fair board and the Carry On Women’s Institute, was barely able to keep up with the demand, and ran out of some offerings before the day ended.

In previous years the Palmerston fair had been plagued by sharp operators in the midway, running illegal games of chance. The OPP assisted Chief Cowan in clamping down on this activity. They closed down a couple of booths.

The evening events included a concert in the fine hall above the library, and a dance. The latter had been poorly attended in previous years, and organizers had considered dropping it as “the perennial weak sister,” but the 1952 attendance made them change their minds.

Agricultural Society secretary Bill Brown reported the net proceeds of the fair at more than $1,000.

President Norm Graham was ecstatic about the day’s success, and particularly so because Hazel Ross, president of the Ontario Society of Agricultural Fairs, had opened the show.

*This column was originally published in the Advertiser on Oct. 25, 2002.