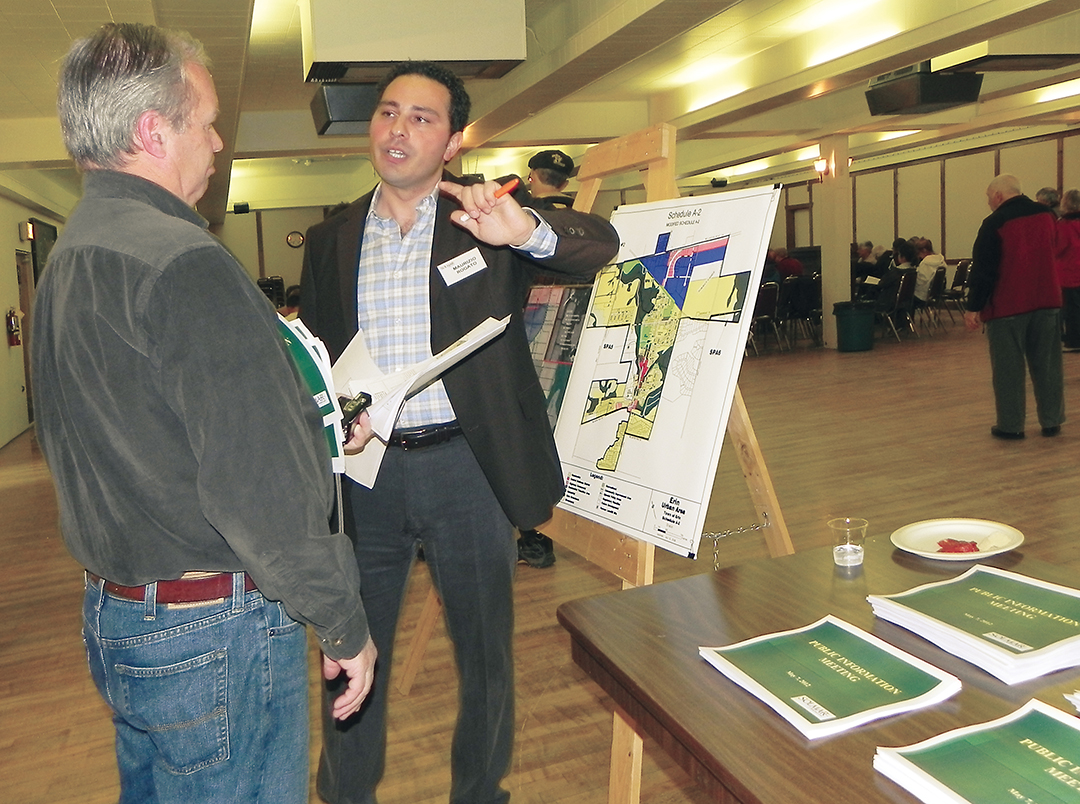 ERIN – Now that Erin’s wastewater environmental assessment (EA) is wrapping up – though some appeals are still pending – attention will turn to decisions on growth in Hillsburgh and Erin village.

The town plans to hire consultants to study all the options for financing a wastewater system, and to develop a growth management strategy that will lead to revisions of the town’s official plan.

In 2014 consultant Matt Pearson, who was leading the Servicing and Settlement Master Plan (SSMP), repeatedly urged town council to decide exactly where new homes and businesses could be built, and how many should be allowed.

Mayor Allan Alls initially agreed, but the process was delayed until the Environmental Assessment could be completed. And now, even if council is prepared to make these decisions, it could still take a couple years to map out the development.

“We hope to hire an outside firm to try to take some of the politics out of it, and just say what is the most logical place to develop first,” said Alls.

A fully-completed sewer system could cost $118 million and swell the urban population by 10,000 new residents over 20 to 30 years, with new development paying about half of the total cost.

The town hopes to use its approved EA to lobby hard for the $40 million it expects to need from senior levels of government. The project cannot proceed without that assistance, but there could still be up to $20 million eventually needed from existing properties that will receive the service.

“Nobody can pressure the municipality to accept a wastewater system that they cannot afford,” said Alls.

While existing urban residents will pay a share over time, the owners of development lands could play a crucial role. Municipalities are often able to arrange additional funding from developers – and ultimately from the buyers of the new homes – to offset the cost to existing residents.

“I’m pretty sure that with a little bit of negotiation, we can get them to pay for some of the old infrastructure,” said Alls.

There are various lands where development has been considered, including the Erin Heights Golf Course and land to the west of it on 8th Line.

But the most prominent players are Manuel Tavares (Dominion Meats), who proposed to build more than 800 units southeast of Hillsburgh, and Solmar Development Corp., which hopes to build 1,240 homes and an industrial-commercial development  north of Erin village.

Maurizio Rogato, director of development and planning at Solmar, said the company is aware the town wants to discuss wastewater issues.

“If approached, Solmar is completely open and willing to actively discuss the positive benefits associated with industry-government partnerships in providing community benefits including wastewater servicing, so we would welcome the opportunity,” Rogato told the Advertiser recently.

Rogato has served on Erin public liaison committees throughout the EA.

“I have been involved for over 10 years now (since before the SSMP started),” he said. “I don’t think anyone contemplated such an extensive timeline, but happy the town has had the courage to move forward with the EA, an important part of the town’s evolution.”

He said that as part of the public process in the upcoming growth management and official plan studies, Solmar would provide input.

“We have a long-standing track record of open participation, such as the liaison committee, and we truly enjoyed getting to know the community and their opinions,” he said.

Solmar is based in Concord and has built a variety of subdivisions, condominium towers and commercial projects in the Greater Toronto Area.

The company’s plans have sparked controversy in some places, including a bitter dispute between the developer and the Town of Caledon, from about 2006 to 2010. Council allowed Solmar to build an industrial development in Bolton, but voted against allowing a large residential subdivision.

Currently, Solmar is facing protests from a citizens’ group in Niagara-on-the-Lake over trees being cut down on the Randwood Estate, which Solmar owns through Two Sisters Resort Corp.

The residents are calling on the municipality and conservation officials to stop the cutting, but the company says it has the required approvals. Land is being cleared for a hotel and conference centre.

In April of 2013, Erin CAO Frank Miele proposed the town enter a partnership with developers to share the cost of the final stages of the wastewater EA. Two developers backed the plan, but the Transition Erin community group and town council felt the process was rushed, and a deal was never struck.

At that time, consultant Bruce Donaldson spoke on behalf of Tavares, who bought the Hillsburgh development land in 2002. Much of the planning work had been done, but the plan was put on hold when the town was forced to conduct the EA.

“We’re looking forward to receiving a proposal from the municipality as to what you are looking for from Dominion Meats or Manuel Tavares and other developers in Hillsburgh, to contribute to the funding of the additional work that’s required,” said Donaldson.

At that meeting, Rogato supported both Miele’s initiative and the SSMP recommendation to develop sewers.

“We wish to reiterate our position, which is to cooperate with the town and of course the development industry,” he said.

The Solmar lands had been owned by Duncan Armstrong, Reeve of Erin Township from 1987 to 1994.

Just before the development restrictions of the Green Belt were to take effect in 2005, town council added the land to the Erin village urban area, opening it up for future growth. Solmar purchased it shortly afterwards.

Solmar has applied to build 1,240 homes on a portion of a 300-acre parcel, east of Centre 2000, north of Dundas Street and south of Wellington Road 124. If approved, the development would happen in stages.

The features of the subdivision and their design will be part of discussions with the town, but the initial plan submitted by Solmar in 2012 had homes on about 125 acres. It featured a central square, three other parks, a school, a place of worship and a stormwater pond draining into the nearby West Credit River.

To the northwest are industrial employment lands and a commercial area, while to the west are wetlands that could include trails.

Solmar conducted a series of required studies on aspects such as traffic and drainage, which can be updated as required. They bought land at 10th Line and Wellington Road 52 that could be used by the town for a wastewater treatment plant.

In 2012 the company offered to allocate 200 units of sewage capacity for the downtown area, where businesses now rely on holding tanks for their wastewater. When asked recently, Rogato would not reconfirm that offer, but said Solmar  remains open to discussion.

Faced with an Ontario Municipal Board (OMB) appeal if it refused, town council deemed the Solmar application “complete” in 2012. This overrode the objections of town planner Sally Stull, but conformed to the wishes of Wellington County. Development remained stalled, however, due to lack of wastewater service.

In 2016, Solmar objected to the county’s official projection of population growth for Erin: 2,995 new residents by 2036. Solmar argued the figure was too low, saying it should be based on the wastewater EA, and they launched an appeal to the OMB, now known as the Local Planning Appeal Tribunal (LPAT).

That appeal is still ongoing, with a third pre-hearing conference set for April 1.

“Under the Growth Plan, Growth Forecasts or Population/Employment Allocations are required for all municipalities within the Greater Golden Horseshoe, including Erin and Wellington County,” said Rogato.

“Our applications require sufficient population and employment allocations for Erin village, being one of two settlement areas where growth is to be focused (as per Provincial Policy) within the Town of Erin.

“With regard to the LPAT appeal, we are hoping to resolve any issues and get our applications approved which would permit some great social and economic development opportunities.”

Alls does not think the population projection is actually holding Solmar back.

“I believe that can be revised,” he said, noting the province periodically allocates population growth targets to Wellington County, which then divides the growth among lower tiers.

“It will depend on when we get wastewater and where we allow development.”

Early in the EA process, Hillsburgh and Erin village were only expected to grow by 1,500 residents, to a total of 6,000, with sewers.

Recent changes to the effluent parameters have resulted in the growth projection over 20 to 30 years being revised to 10,000 new urban residents, for a total of 14,500.