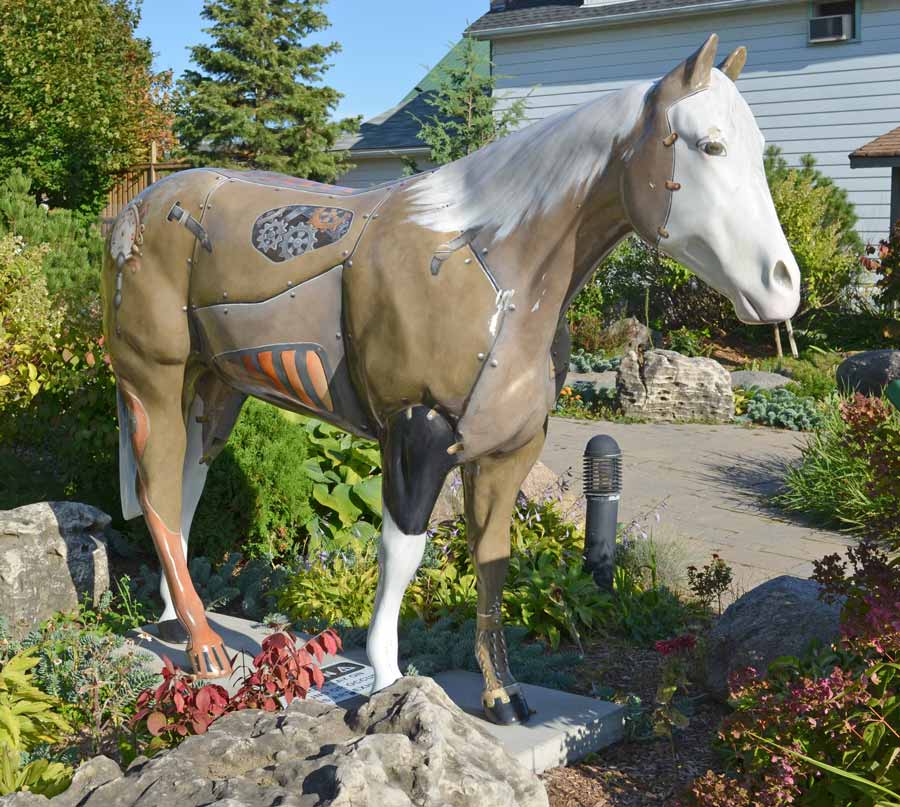 Unique promotion - Painted horse sculptures like this steampunk-styled creation at McMillan Park in Erin were part of the Headwaters Tourism promotion of local equine events in the 2015 Pan American Games.
Photo by Phil Gravelle

ERIN – With Headwaters Tourism expected to wind down operations by the end of this year, the Town of Erin will be left without a local association dedicated to attracting visitors.

For the last 25 years, Headwaters has been a partnership of Caledon, Dufferin County and Erin, but both Caledon and Dufferin officials have said they are not satisfied with the arrangement.

Earlier this year, Caledon gave six months’ notice that it had concerns about continuing its participation, meaning the deal would not automatically renew for four years at the end of this year.

The deal could have been revised, but on Sept. 12, Dufferin County council passed a resolution to not renew participation in Headwaters Tourism, and to instead fund a tourism and cultural services strategy in its 2020 budget, working with local municipalities such as Orangeville and Shelburne.

The withdrawal of any of the partners dissolves the Headwaters agreement.

Erin councillor John Brennan, who represents the town on the Headwaters board of directors along with economic development officer Robyn Mulder, said the town will have no option but to find other ways to promote itself.

There has been some staff turmoil since July of 2018 when CEO Michele Harris resigned, after leading Headwaters Tourism for nine years, to take up the position of director of economic development and tourism with Grey Highlands. A new executive director, Eduardo Lafforgue, resigned in May of this year.

Brennan said the town has been providing less than 10 per cent of the Headwaters funding, about $18,000 annually, while Dufferin was contributing about $90,000 and Caledon about $93,000.

The Headwaters board will meet on Oct. 10 to discuss the situation, and Brennan hopes the non-profit group can finish up with a small surplus of funds.

Brennan said there remains the possibility of the Headwaters municipalities working together to fund specific tourism promotions, without having any paid association staff.

He said that when Headwaters Tourism was first created, there was an apparent need for it.

“With each of the partners building up their own economic development departments, a lot of the need for what the organization had been doing was going away,” he said.

“That’s what prompted Caledon and Dufferin to look at it and say, ‘we’re working on economic development and tourism ourselves, and there isn’t really a lot of rationale for us to go through Headwaters anymore.’”

Erin can also still benefit from its established relationship with Central Counties Tourism, a much larger agency that delivers provincial tourism funding to a region extending from Caledon to Durham Region.

Erin is geographically in a different tourism region, based in Kitchener, but has traditionally been considered more part of the GTA tourism market targeted by Headwaters Tourism.

Brennan said the visitor guide published by Headwaters and distributed by the Globe and Mail was a particularly valuable marketing tool, along with a wealth of information about businesses and events on the Headwaters website.

The association ran a variety of promotions to spark visitor interest, including the Parade of Horses, a series of whimsical horse sculptures painted by local artists to celebrate the local equine events of the 2015 Pan American Games. There is one at Century Church Theatre in Hillsburgh and another at McMillan Park in Erin village.

Wellington County councillor Jeff Duncan, who sits on the Central Counties board, said the agency would continue to promote tourism businesses within the Headwaters region.