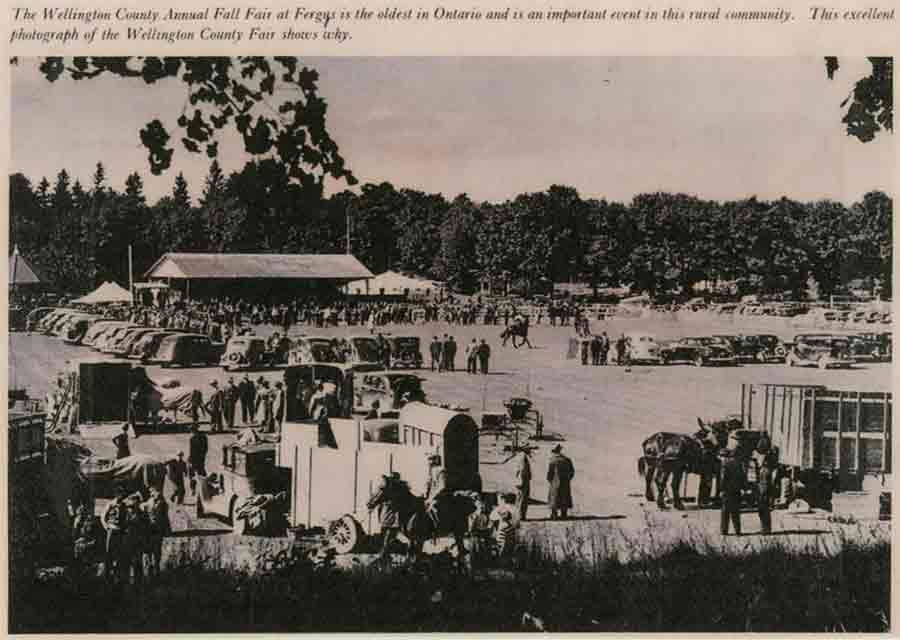 This week the 1952 fall fair series concludes with a look at those in Fergus and Erin.

Historically, both have tended to be large events, and both have a long history – that of the Fergus Fair to the old Centre Wellington and Nichol fairs, beginning in the 1830s.

Interestingly, and unlike the fairs in the north, both Fergus and Erin have clung to their traditional dates over the past half century. The 1952 Fergus fair ran Sept. 12 to 13 (in 2002 it was Sept. 13 to 15), and Erin continues to have success with its fair on Thanksgiving weekend.

In September 1952, secretary Norm Hamer and president Rae Freure expected an outstanding fair. Much interest was in evidence when they issued their prize list in late August. In 1952, the Fergus Fair was the first in Wellington County, and in the general area, only the Elmira fair had already taken place. There were not many reports yet from nearby fairs to act as a guide. Nevertheless, advance entries arrived in record numbers in the week after Labour Day.

The main day of the Fergus fair disappointed the organizers with its attendance, down more than 25% from 1951. The reason was not the fair itself, but the weather. After a cool spell in late August, which included widespread frost on Aug. 23, the temperature headed up. On fair day the mercury hit 90 degrees (32 on the new scale), accompanied by oppressive humidity. The day’s crowd barely passed the 3,000 mark.

Despite the small crowd, the entries of livestock were excellent. A special Holstein show attracted 13 exhibitors and 90 cows.

Beatty Bros. had their famous touring model kitchen, constructed in a trailer, plus exhibits of their products in the hall. Fergus merchants supporting the fair with exhibits, included Lorne Pattison’s Furniture and Graham Ferguson’s Hardware.

Many attractions at the 1952 Fergus Fair appealed to urban visitors as well as farmers. Their inclusion raised some criticism from old time purists, as they did at other fairs attempting to broaden their appeal. One was the Fergus Art Society’s competitive show of paintings, water colours and sketches, judged by the leading Elora artist of the day, Percy Runnells. A baby contest, popular for several years, drew more entries and interest than ever.

Musical performances continued outside throughout the day. The featured performer was 85-year-old Charles Dyer, who had just won the “over 70” category at the Canadian National Exhibition. Other attractions were the Junior Farmers square dancers, a magician, a tap dancer, and the Fergus Pipe Band.

There were a few disappointments at the show. The midway was small, and featured no rides other than some ponies. Only a few booths were open, and none offered games. A few days before the fair, organizers discovered, to their dismay, that the date had been listed incorrectly in a bulletin issued by the Dept. of Agriculture.

As might be expected, given the hot weather, the crowd at the evening dance at the old Fergus arena was small.

A month later, the Erin Fair brought the fall fair season to a close on a resoundingly positive note. The Erin Agricultural Society had been scheduling events on the Saturday and Monday of the Thanksgiving weekend. Rather than diminish the attendance, this made the fair a tradition in many families. The Erin Advocate carried a long column in its issue after the fair, listing people who had returned to Erin for the weekend.

Crowds thronged to the fair grounds Saturday afternoon. The midway was open for business, and the pony and horse drawing competitions came off perfectly in front of the grandstand. Entertainment followed, headlined by local acts: the Erin Ladies Quartette, the Donaldson Family of Hillsburgh, piano selections by John Tocher, and a sing song led by Wilf Urquhart. The Hillsburgh Brass Band played some selections, and returned Monday for additional performances. Following the entertainment, a barn dance kept people on their feet until midnight.

The fair was closed Sunday, but there were other activities in town associated with it. The Hilltop Lodge served Thanksgiving dinner at noon and evening sittings. All Saints Church scheduled its harvest home services and events for the day. And that night, at five minutes after midnight, the dancing started in Stanley Park.

The Erin Fair in 1952 drew not only from the farm area to the north and west of town, but also from Peel and Halton, which, before urban sprawl claimed much of their areas, were prime agricultural counties. Some exhibitors came from even farther afield, in a band from Richmond Hill to Lucknow and Mildmay.

Like the fairs earlier in the season in north Wellington, the Erin Fair attracted a record number of entries in horses. The livestock judges considered the cattle and hogs the finest they had seen at a country fair that year. A special Hereford show drew 152 entries, and a Yorkshire hog show more than 100.

Wellington County competitors did well in some sections. Sheep winners included Jack Kelly of Elora, J.H. Rettie of Fergus, and J.P. Benham and Sons of Everton.  Earl Moore and Sons of Orton dominated in Holsteins, as did Gordon Black and Sons of Guelph in Guernseys.

The prize list included an expanded section for potatoes, and the competition was especially keen among the commercial growers from the Hillsburgh area. Top potato prize winner was Ruth Awrey.

Like Fergus, merchants and manufacturers used the Erin Fair to show off their wares. W.C. Woods of Guelph brought in a huge display featuring freezers, refrigerators, and milk coolers. Though this firm is now known as Canada’s leading maker of freezers, in 1952 it still clung to some of its prewar lines geared to the agricultural sector: milking machines, grain grinders, barn ventilators, and electric fencers.

A popular attraction was a contest to guess the weight of two pigs, put on by the Erin Grist Mill. The object, of course, was to advertise the marvelous weight gain that could be expected by feeding the mill’s name-brand feed varieties.

The day ended with the traditional Fall Fair dance at Stanley Park from 9pm until 1am. This was the last dance of the season at the park.

The Erin Agricultural Society claimed a total attendance at all the Fall Fair functions that weekend of 17,000, making the Erin Fair by far the largest in the county that year. The village had taken on a carnival atmosphere beginning Friday, when the entries started to come in and the midway began setting up.

The Agricultural Society had celebrated its centennial in 1950, and enthusiasm generated by the celebration remained two years later. In 1949 the Erin Fair had been elevated to “Class B” status by the provincial association – this required that a minimum of $3,000 in prize money be awarded. Erin, in 1952, was the only “B” fair in the county, and consequently could attract the top exhibitors.

Only one sour note spoiled the harmony of the weekend. Early Saturday morning, thieves had burglarized and ransacked three businesses, seeking the petty cash kept on the premises.

Much remains constant with Wellington’s fall fairs over the past 50 years, but those of 1952 seem a little distant, not so much for their attractions, but rather, for the place they occupied in their communities.

In 1952 the fall fair dominated social activity in the community. With an increasingly urbanized population, an ever diminishing place for agriculture and a multitude of rival attractions, they are no longer dominant.

Despite the competition from other attractions, fall fairs are likely to remain important as long as there is an agricultural sector in Wellington.

They will continue to serve their old purposes of stimulating improvement, offering some friendly competition, and giving farmers a reason to gather and socialize.

And most important, they will continue to showcase agriculture – its heritage and traditions as well as its progress – to the community at large.

*This column was originally published in the Wellington Advertiser on Nov. 1, 2002.