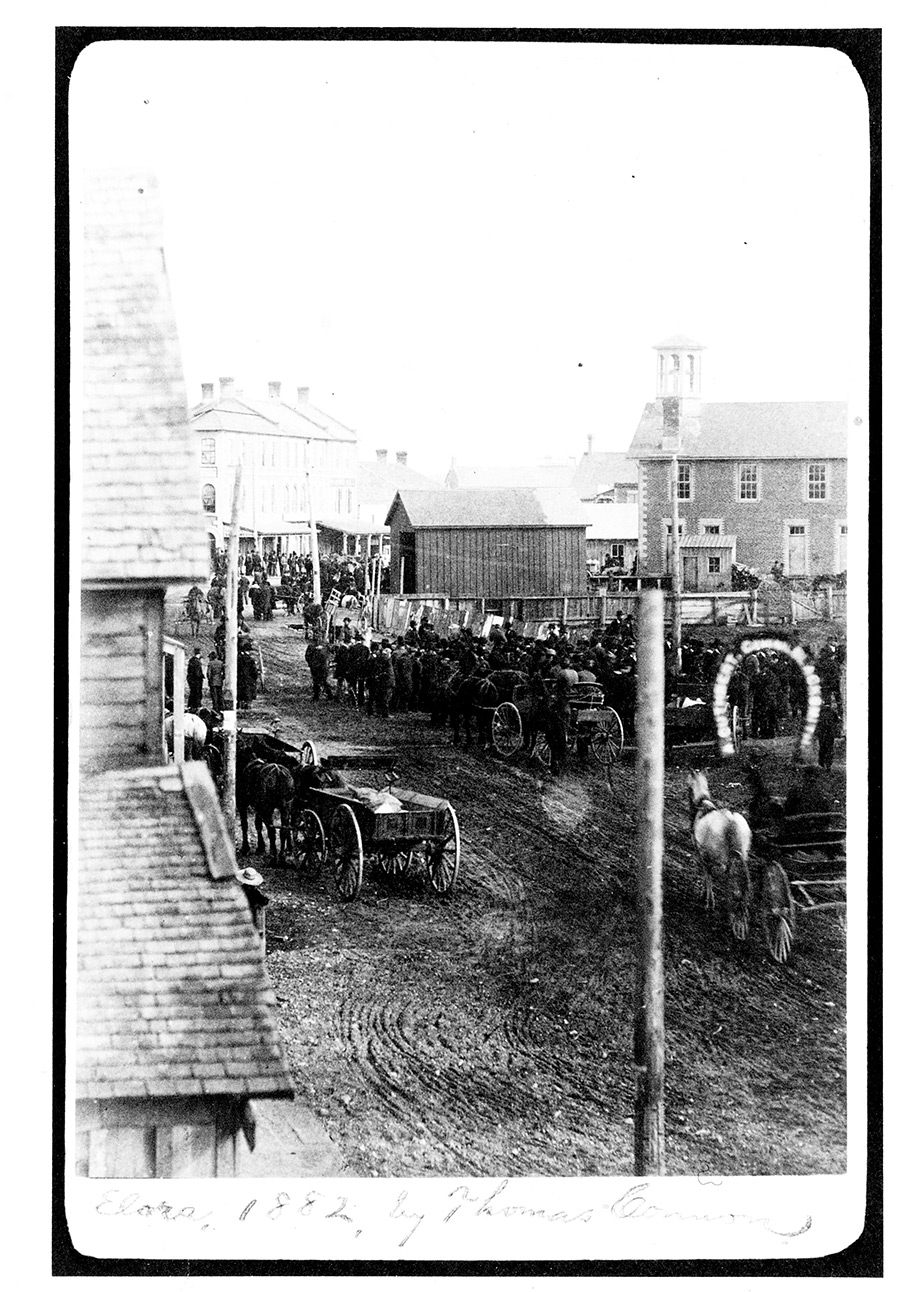 After much detective work, columnist Steve Thorning proposes a reason for all the well-dressed men in the photo: electioneering on June 6, 1882 at the monthly Elora market. The brick building on the right was generally called the Town Hall, rather than the Market House. Thomas Connon took this shot from the window of his second-floor studiou at the corner of Geddes and Moir Streets. Wellington County Museum and Archives, ph 11762

The Wellington County Museum and Archives is fortunate to receive a steady stream of photographs as donations.

When one of these pictures shows a previously unknown Elora scene, archivist Bonnie Callen (now retired) is kind enough to give me a call. This was the case with this week’s photograph, which shows a Geddes Street scene and is marked, “Elora, 1882, by Thomas Connon.”

The buildings seem compressed; this was caused by the telephoto lens Connon used for this picture.

He took the photograph from the south window of his studio, on the second floor of the building at the corner of Geddes and Moir Streets (currently a laundromat). The building at the left edge of the picture housed Alex Cuthbert’s carriage and blacksmith shop. His horseshoe sign hangs from a telegraph pole in front of the building.

The Dalby House (formerly the Iroquois Hotel, now doctors’ offices) is plainly in view. The roof plainly shows the fire walls that divide this building into three portions. The roof at the peak originally was made of glass to provide light for John Gordon’s photographic studio, but has been closed in with shingles. These were definitely the days before central heating. There are six chimneys on the building, each with at least two flues.

Under a magnifying glass, some signs can be distinguished on the building. The Dalby House sign is above the centre doors, between the two sections of porch.

A sign at the north end of the porch reads “Gordon’s Saddlery.” Andy Gordon had operated this business in the peak portion since the building was constructed in 1865. He lost the business in insolvency proceedings in 1880. If the 1882 date for the picture is correct, it is being run by his son George Gordon and F.W. Sheppard.

Farther down, on what is now the dining room portion of the Dalby House, there is a sign reading “Hardware Hall.” Under the porch another reads “Dalby’s Hardware.” By 1882 most of Robert Dalby’s business empire had crumbled, but he still had the hotel and hardware store. In two years he would be dead at the age of 46.

The roofs of several other buildings can be identified. The railing around the deck on top of the Charles Clarke building is plainly visible (currently Drimmie’s Flower shop). Telegraph poles line both sides of the street; these belong to the Montreal Telegraph and Dominion Telegraph Companies. In 1882, as a result of a merger, they were rationalizing their systems, but Elora still had two lines up the main street to Salem.

Some readers will recognize the old Elora Town Hall (the large brick building at the right of the photo). This side view plainly shows the doors that provided entrances to the various produce and butcher’s stalls inside. Alex Carter had his grain buyer’s office in the front corner of the building. There is some kind of frame lean-to partially covering one of the windows. A chimney has been added for the stove that heats Carter’s office. Although only nine years old, the building had already been altered.

The barn-like building in the centre of the picture houses the Elora weigh scales. These were used to weigh cattle and loads of grain, and it made sense to have the facility at the market grounds. Note that the building has been modified with a recent addition at the rear. Elora purchased a new seven-ton Fairbanks scale in 1881, and the building addition is probably part of the project. The scales were moved several times over the years, eventually winding up in the east end of what is now Hoffer Park.

The board fence contains the area now occupied by the Elora post office and library. It is in poor repair, particularly along Geddes Street, probably the result of herds of cattle leaning against it. The boards are plastered with bills and posters. Unfortunately, they are too far away to be deciphered.

There is no evidence to contradict the date of 1882 written on the picture. Unless it is certain that the date was added by the photographer, dates written on photographs should not be accepted without question. In any case, this picture cannot be earlier than 1881, or later than 1884.

The most intriguing part of the picture is the people.

David Meyer (former Advertiser reporter) and I spent some time puzzling over the question of what is going on. I rejected the suggestions that it was a parade or a horse show.

The wagons appear to belong to farmers transacting business in town. A couple contain sacks, and one carries what appears to be a pig. The crowd consists entirely of men, and they seem to be gathered to listen to someone: there are two men standing on a raised platform just to the left of the telegraph pole.

I concluded that it must be an auction sale or a political speech. I then recalled that a federal election was held in 1882, and that it was a particularly lively one in the Centre Wellington riding. I dug out my research notes on the campaign.

Dr. George Orton, of Fergus, held the riding for the Conservatives in 1882, and he had his hands full when the Liberals parachuted Sir Richard Cartright into Centre Wellington to try to unseat him. Cartright had been finance minister in Alexander Mackenzie’s Liberal government in the 1870s. Many considered him a more effective politician than Liberal leader Edward Blake. Cartright was unquestionably the number two man in the federal Liberal party in the early 1880s.

Cartright campaigned extensively in the western part of the riding in early June 1882. He spoke to a crowd estimated at 1,000 in Drayton, and on June 5 he packed the Elora drill shed with more than 900. The next morning, Tuesday, June 6, he visited the monthly Elora cattle market.

I believe this picture is of an impromptu Liberal rally early in the morning. There are no shadows, and the heavy clothing worn by the men suggests that it is cloudy and cool.

The people standing in front of the Dalby House are obviously watching whatever is happening, and a carriage with two people in it has pulled over to the side of the road.

The picture is not detailed enough to show the facial features of the men standing at the front. Cartright would be immediately identifiable for his trademark Dundreary side-whiskers.

Thomas Connon saw literally hundreds of market days through his studio window. He must have had a reason for taking a picture of this particular one.

As a good Liberal, he would want to get a shot of Cartright on the stump. This could also explain his use of the telephoto lens. He was photographing the people, not the buildings.

Although there is no conclusive evidence, I propose that this is a photograph of Sir Richard Cartright addressing the Elora market crowd at about 5am on the morning of June 6, 1882.

(For those interested, Cartright lost the election by 151 votes, though he did have a majority in the Elora area.)

*This column was originally published in the Elora Sentinel on July 19, 1994.