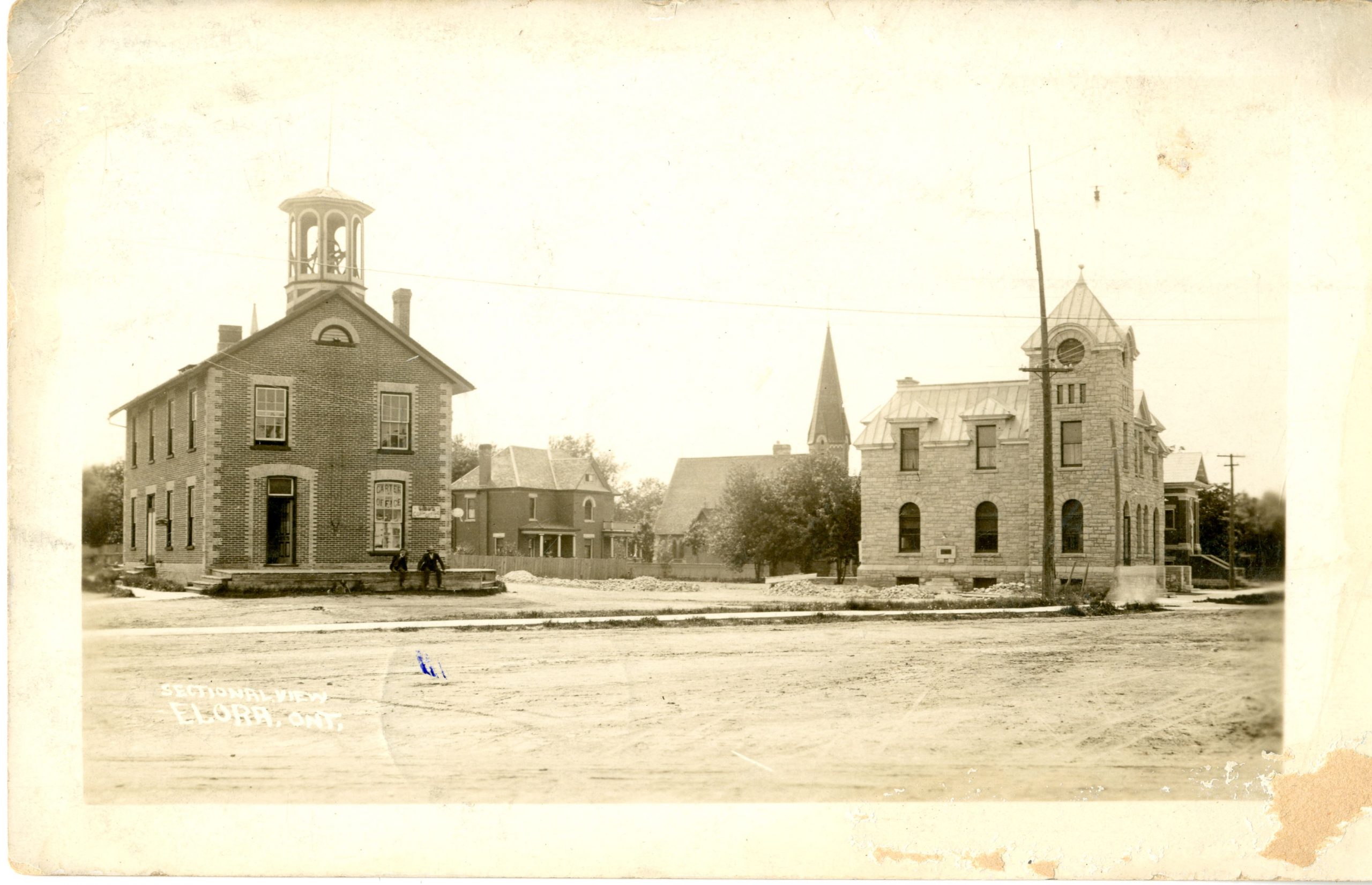 Under construction – This post card shows the Elora market square and the post office, right, as it was being constructed in the autumn of 1911. The clock had not yet been placed in the tower. The building on the left was the town hall. Wellington County Museum & Archives, ph 7334

To make use of the postal system before the local office was opened in 1839, Elora pioneers gave their letters to travellers going to Guelph.

Post office patrons had the option of paying in advance, or having the recipient pay the postage.

Most users did the latter, believing it was a good guarantee that the letter would be delivered. Postal service became a little handier when the Fergus post office opened in 1836.

Postal rates in the early part of the 19th century were very expensive. They were based both upon the weight of the letter and the mileage. The cheapest rate was 4.5 pence for under 60 miles. A letter to Toronto cost 7 pence, equivalent to a couple of hours work for the average person. Obviously, at these prices few people used the post office regularly, and most mail was for commercial, government and legal matters.

A series of rate reductions occurred during the century, and there was a corresponding leap in volume of mail after each reduction. When the post office came under Canadian control in 1851 the mileage rates were abolished and a uniform 3 pence letter rate was established.

In 1859, Canada adopted decimal currency, and the letter rate was set at five cents. After Confederation in 1867, the rate was lowered to three cents and, in 1898, there was a further reduction to two cents, not only for Canada but also for the United States and most of the British Empire.

Mail volumes in Elora rose as the rates fell. In the 1840s the office dispatched only 40 or 50 letters per week, with about twice that number of incoming letters.

With these volumes, the postmaster’s job was not a full-time position until the mid-1870s. For most of the time up to this date, the post office was located in a corner of a store: in Ross and Co. in the 1850s and in W.H. LaPenotiere’s book store in the 1860s and 1870s.

The handling of mail was labour intensive in the early years. On outgoing mail, the postmaster had to apply a date stamp, weigh the letter (and calculate mileage before 1841), and mark the amount of postage on the letter or cancel the stamp. Stamps were introduced in 1851, but their use did not become widespread before 1870, and was not compulsory before 1875. Each piece of incoming mail had to be dated, and postage collected on unpaid letters. In addition there was extra work for registered mail.

The post office itself was open from 5am to 8pm, six days per week, and sometimes later if a train was delayed. These hours continued into the 1940s.

By the 1860s, the Elora post office was selling and cashing money orders, and was a branch of the post-office savings bank. In these years, regular banks were not interested in small deposits, and the post-office savings bank became very popular with low and middle-income people. By 1870, the Elora office had over 200 accounts and about $25,000 on deposit — a sum equivalent to well over two million in 2020 dollars.

The early mail-distribution system was a hub-and-spoke system, and when the Elora office opened, it was added to the Guelph-Fergus route, which operated three times per week in the 1840s.

After the Canadian government took over the post-office in 1851, dozens of new offices were opened and new stage routes were added to serve them. By 1865, Elora itself had become a minor hub, making up and dispatching mail on daily stage routes to Fergus-Owen Sound, Walkerton, Drayton, and twice daily to Guelph.

New routes were added in the 1860s that changed the hub-and-spoke distribution system to an interconnected network.

From the 1870s until the 1950s, the railway was the primary distribution system for the Canadian post office. Many passenger trains in these years carried cars fitted out as fully-functioning post offices, receiving, sorting and dispatching mail on their routes.

The trains without railway post offices handled closed bags in their baggage cars. Elora received mail at least twice, and sometimes three times daily in each direction on the Wellington, Grey and Bruce (later CN) line between 1870 and the 1950s, and twice daily on the Credit Valley Railway (later CPR) when mail cars ran on that line between 1882 and 1924.

With this system, the mail from and to Elora was constantly moving, and letters to all points in Ontario were routinely delivered over night, and sometimes even on the day of mailing. Mail clerks had to have a detailed knowledge of the whole system, since the routing of a letter could change, depending on when it was mailed during the day.

Beginning in 1906, people who did not get to the post-office in time could mail their letters in boxes at both Elora railway stations, or on the mail car itself. In addition, there was a mailbox at the north end of the Victoria-street bridge, which was emptied by the courier on his way from the post office to the station.

From 1867 until 1884, the Elora post office was located in the Mill Street bookstore of W.H. LaPenotiere. In 1884, LaPenotiere resigned and moved to the west. His successor was John Godfrey, a shoemaker whose business was suffering from the competition of factory-made shoes. The post office was in his store on Metcalfe Street (now the premises of Noecker Travel). Facilities here were commodious, and included lock boxes for the convenience of customers.

In 1908, the government purchased the lot at the northwest corner of Geddes and Colborne streets. The second floor space, originally for a customs office, was redesigned to provide an apartment for the caretaker. Construction did not begin until 1911, and the building was opened in January of 1912, under the supervision of Thomas Godfrey, who had succeeded his father as postmaster in 1893.

The style was a fairly typical example of the public buildings being erected by the government in the pre-war years, but the Elora building was executed in stone rather than the red brick that was more commonly used for this style. The outstanding feature is the tower, housing a British-made clock and an 800-pound bell, which at one time tolled every hour. The cost of the whole project, about $16,000, at the time was considered a gross extravagance by many.

The first of Elora’s rural routes was set up shortly before the post office moved to its new quarters, and the last, RR 3, was established early in 1915. Rural delivery had been resisted by the post office for 20 years because of the cost, but eventually the system was adopted under public pressure, particularly after most of the larger centres were receiving door-to-door delivery.

In the end, the advantages of rural delivery in helping to end rural isolation were generally recognized. A major repercussion was the closing of hundreds of small rural offices. Among those closed in the Elora area were Pentland, Inverhaugh, Ponsonby and Ennotville.

Although railway mail service to Elora remained excellent until the 1950s, service began its decline beginning in 1915. In that year, the CPR trams began to carry both freight and passengers on a slower schedule between Elora and Cataract Junction. In 1924, the mail cars were removed from this line, though a sealed bag continued to be carried for several more years. In 1931, there were reductions in the service on the CNR line.

In the post-war period, I.C. Bricker, who replaced Thomas Godfrey, is remembered as Elora’s most colourful postmaster.

Bricker operated a drug store in Elora, and received the postmastership on the basis of a war disability. Although a competent administrator, numerous customers found him short-tempered and domineering. Bricker devoted most of his spare time to his stamp collection, which he pursued to the point of obsession.

Bricker’s successor, Jack Wright, had the misfortune to witness the decline in postal service during his administration, from 1947 to 1977. First, the railway mail service was reduced to twice southbound and once northbound per day. The mail cars were removed completely in 1959, and the delivery was taken up by truck service. At the beginning, there were two trucks per day from Guelph, but this was reduced to a single run, and the connection was moved to Kitchener in 1972.

Hours of service at the office were reduced several times over the years, and were now determined by the post office department, rather than the local postmaster.

In 1971, the people of Elora were astounded to learn that the department of public works intended to demolish the post office and replace it with what federal officials considered to be a more attractive and efficient building.

Petitions against the scheme received wide support, and John Andrews, a high-profile architect living in Elora at the time, prepared alternate plans that allowed the existing building to be retained and renovated, with an inconspicuous addition at the rear. This was the first time in the history of the village that Elora residents mounted a campaign to save a heritage building.

An annual occurrence that has declined greatly over the past decades is the Christmas rush. In the 1950s and 1960s, the Elora post-office would often deliver in excess of 40 Christmas cards per household, and there was a heavy volume of parcels as well. As late as 1967, cards could be sent for three cents.

Major changes in the Canadian postal system occurred in the 1980s as a result of automation and the reorganization of the system as a crown corporation. Mail is now sorted in large batches at a few processing plants. There were strengths in the old rail-based system: mail was handled in small batches, was always moving, and could be sent on alternative routes when problems occurred.

Curiously, several aspects of the post office are beginning to resemble those of the 1850s: the distribution system has reverted to a hub-and-spoke arrangement, and most offices receive and dispatch mail only once per day.

Post office buildings are being augmented or replaced with postal outlets in stores, similar to the practice of the 19th century, while door-to-door and rural delivery are being curtailed. In this climate, the future of the Elora and other small-town post-offices is uncertain.