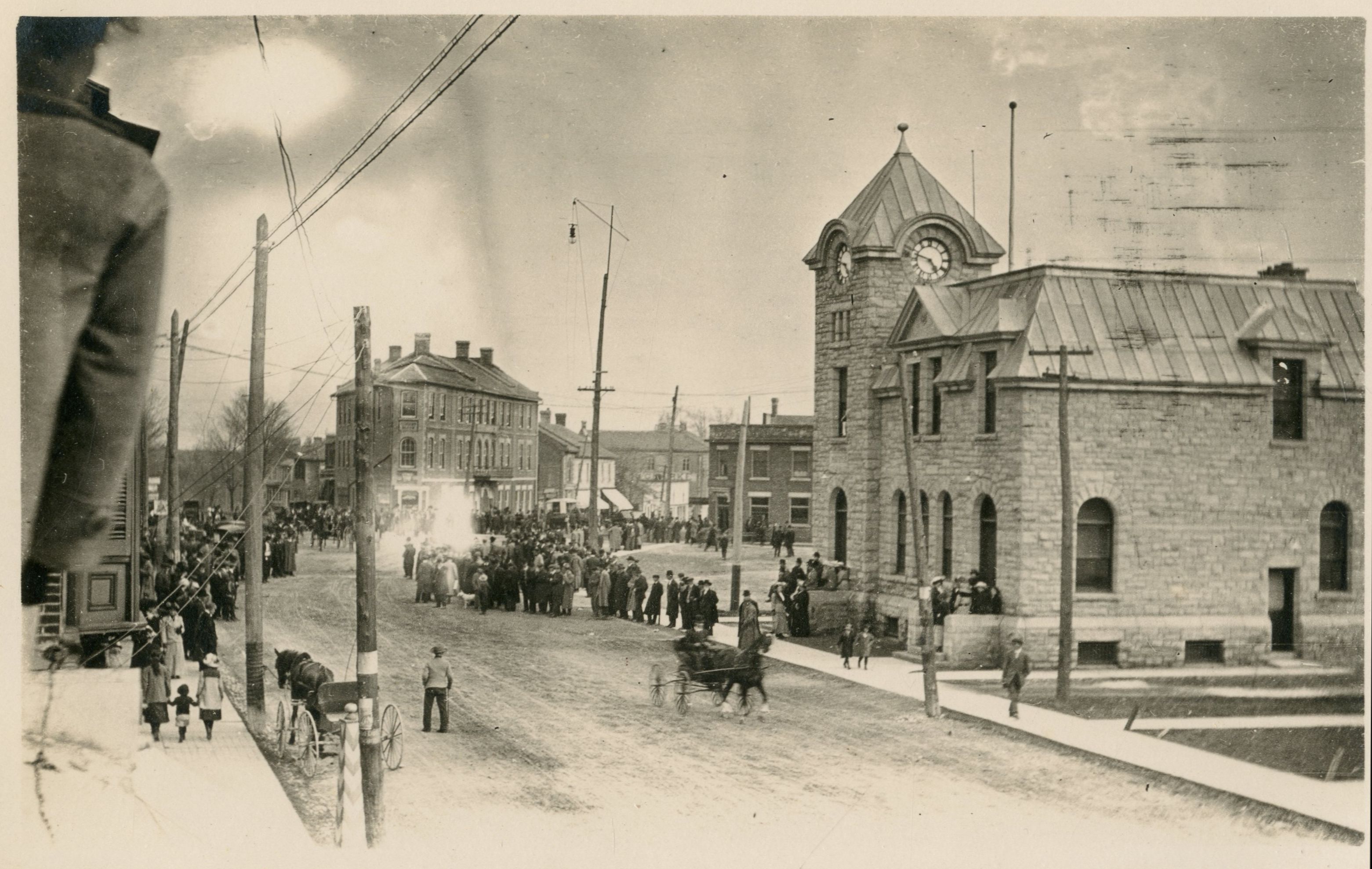 Early street lighting – Carbon-arc lamps produced light from a spark between two carbon rods. They were bright, but required constant maintenance. Elora used them when its electricity came from Dr. Abraham Grove’s plant in Fergus, from 1891 until 1914. Over this period, the number was increased from four to six. This picture shows a streetlight on its high pole opposite Elora’s brand new post office, which was built in 1912. Wellington County Museum & Archives, ph 23404

In 1892, Elora added electrical power in the village.

However, Elora did not connect to the Ontario Hydro system until 1914.

The first electrical system, which served the village for almost 23 years, was owned by Dr. Abraham Groves, of Fergus. Service was both expensive and unreliable.

Groves set up his electrical generator in 1891, and within months, extended a line to Elora. His plant was located in the old Watson tannery building in Fergus, which he had purchased and converted to a flour mill, powered by a steam engine.

The doctor’s electrical system operated only from dusk to midnight, when power was not needed in the mill.

The first application of electricity in Elora was for streetlights – four of them. The village had been maintaining a few streetlamps, fueled by coal, since 1881. The electric ones, which went into regular service late in 1891, were a great improvement over these. Even so, they were costly. Council squabbled with the doctor each year when the contract was renewed.

These early streetlamps were of the carbon-arc type. Light was produced by a spark jumping between two carbon rods. When properly set up, they were efficient and bright, but they required constant attention. The arc lamps were mounted on high poles, with ropes to lower them for maintenance. They are visible in many turn-of-the century photographs of Elora’s main street.

In 1892, Groves began signing up commercial and domestic customers, but found only five in Elora in his first year. The first, and largest, was Tommy Biggar’s Commercial Hotel (now the home of the Gorge Cinema).

In July of 1892, Biggar installed a system of 65 light bulbs, which provided electrical illumination for all the public rooms, and many of the bedrooms, in Elora’s largest hotel. The rival Dalby House eventually responded by installing an elaborate gas lighting system.

St. John’s led Elora’s churches in moving to electricity with a 20-bulb system in the fall of 1892. The Armoury Hall (now the LCBO) and the library reading room soon followed. The cheapskate Presbyterians splurged on two bulbs to light the basement of Knox church.

Meanwhile, several of Elora’s factories were joining the trend to electric light, but all generated their own electricity, rather than buying it from Groves.

John C. Mundell put a 50-bulb system in his furniture factory in 1892, which could be powered by either water or steam. The carpet factory followed in 1895 with a 100-bulb system, and immediately put on a full night shift.

Electric light was not cheap. Groves charged ten cents per kilowatt-hour, equivalent to $4 or $5 in today’s money. The 1992 price for a kilowatt-hour is about 7 cents. Even for the factories generating their own power, there was equipment to maintain and costly light bulbs to purchase. In these early years, electricity was used exclusively for lighting. It was too expensive for powering machinery.

We do not know who Groves’ first domestic electrical customer was, but Udney and John Richardson were among the earliest. Both included electrical wiring when they built their houses at the turn of the century. Overall, though, expansion of the system progressed at a snail’s pace. At the price that Groves charged, no one left lights on unnecessarily.

The limited hours of service and high costs deterred most people from adding electrical lighting systems to their houses. After 1900, as other towns acquired better electrical systems, dissatisfaction with the Groves system mounted.

The doctor made improvements and extensions to his system, but always remained behind the pace as electrical technology advanced. At the end of the system’s existence in 1914, Groves had about 150 customers in Elora. Many were shops; the rest houses. Perhaps 25 per cent of the village was connected to the system; the average customer had lights totalling about 250 watts.

In 1908, an electrical engineer, J. Stanley Richmond, conducted a survey of the potential demand in Elora for electricity, and a study of costs and financing for a modern system. Richmond found that the village needed 22 arc lamps for streetlighting, about 2,200 bulbs in stores and houses, and a further 40 horsepower for various industrial uses.

He proposed that two gasoline-powered engines be used to run the generators. He placed the cost of the entire system at $20,000. Richmond calculated that the capacity could be doubled for an additional $8,000.

Like Groves’ system, the proposed Richmond system would operate on direct current. The trend in Ontario, though, was to alternating current, and it was strongly so after the creation of the Ontario Hydro Electric Commission, which sought to bring Niagara power to the small towns of southern Ontario. Direct current is prone to heavy losses in transmission lines, and transformers cannot be used with it.

The Richmond proposal was only one of several made to the village. The most serious of the others, by the Cobalt Electric Development Co., would have used water power to generate the electricity.

The cost estimates for an adequate electrical system provoked a noisy reaction from a number of taxpayers, who objected to the cost of debentures for it. The reaction was strong enough to spook Elora council, and nothing was done with any of the proposals.

Meanwhile, a movement to bring Elora into the Ontario Hydro system was under way. The leading figures were T.E. Bissell, Elora’s most dynamic industrialist, and A.J. Kerr, operator of a butcher shop. Bissell and Kerr spent four years arguing in public and private for an Ontario Hydro connection.

Bissell had seriously considered bringing Ontario Hydro power to Elora at his own expense in 1909, but decided instead to build a new power plant and dam on the Grand River. (The dam survives in Bissell Park, still perfectly sound after 109 years.) Had Elora council cooperated with Bissell in 1909, Ontario Hydro could have been brought in at a moderate cost.

A.J. (Sandy) Kerr spent a lifetime in business in Elora, but his career in politics lasted only a decade.

He was elected to council in 1903, but resigned after several months, complaining of assessment irregularities, managerial incompetence, and elitism in the conduct of the village business. He later resumed a seat on council, and was elected reeve in 1909. He lost to Udney Richardson in 1910 and 1911, then regained the top seat, by eight votes, in 1912.

Though he grew up in the village, Sandy Kerr viewed himself as an outsider in local politics. He vigorously advocated civic improvements, and his strongly-held opinions earned him as many critics as supporters. He also brought a breath of fresh air in local politics. At 37, he was many years younger than the other councillors.

During 1912, Kerr devoted his energies to bolstering support for Ontario Hydro in Elora and studying the engineering and financial aspects of the electrical question. He established contact with Adam Beck, chairman of the Hydro Electric Commission, and the two became regular correspondents. Sandy Kerr was determined to bring cheap electricity to Elora.

[To be concluded next week.]

*This column was originally published in the Elora Sentinel on Jan. 14, 1992.