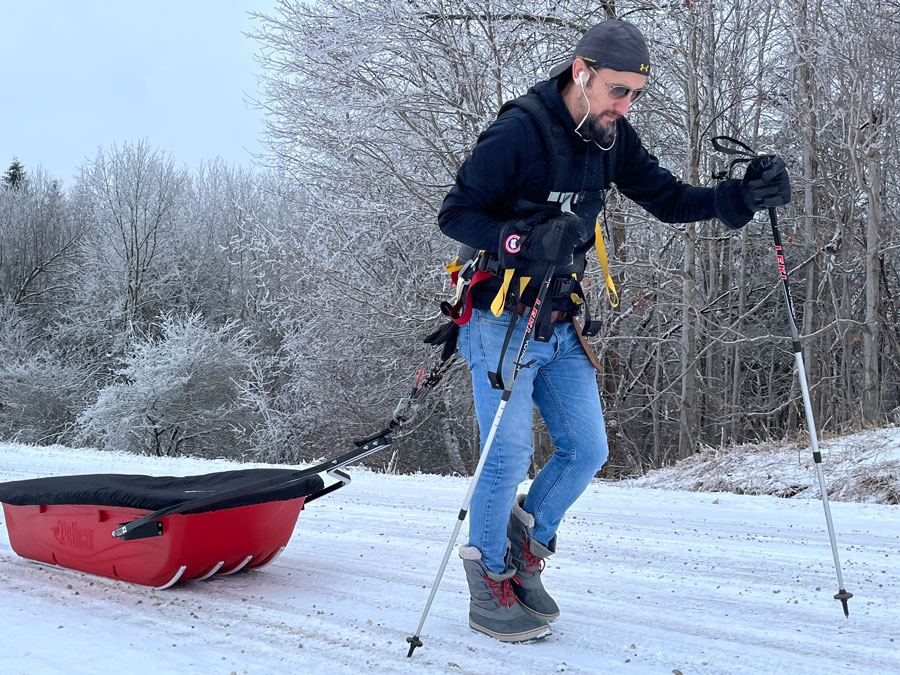 ELORA – Ten years ago Mike Duhacek bundled up, strapped a sled to his back, and pulled a 125-pound weight from Windsor to Ottawa to raise funds for cancer research.

To mark the 10th anniversary of that initial “Help Me Bury Cancer” campaign, the Elora man is doing it again in what he’s calling the “double up” event.

Duhacek will depart from Owen Sound on Feb. 4, World Cancer Day, in a seven-day trek to Oakville.

This time he’ll be pulling a 200-pound sled with the word “cancer” in block letters. And when he gets to Oakville, he’ll bury those letters, in effect burying cancer.

“I chose Feb. 4 because it is World Cancer Day but also because it will be the most gruelling weather,” he said in a phone interview.

A decade ago, two of Duhacek’s grandparents died from cancer and then his mother was diagnosed with a rare form of cancer – all three in quick succession.

“It came as a one-two-three punch. That’s what prompted the first event,” he said.

Duhacek raised $43,000 for the Canadian Cancer Society with his inaugural pull in 2013.

In 2020 he launched a book, One Foot in Front of the Other: The Journey of a Million Steps, that outlines his experience pulling that heavy load.

Proceeds from the book go to the Canadian Cancer Society as well.

He’s been involved with other fundraising events since then and, as an employee with the Halton Regional Police Service, this year he is the Cops for Cancer ambassador.

“I hear stories,” he said. “I connect with people who have cancer and what I’ve learned is that so many people are fighting and suffering through it.”

Next year his mother will be 10 years cancer-free – and the walk is still dedicated to her.

“For anybody that needs that word of encouragement, here’s a positive story,” he said.

“I hope people will see the positive; that the glass is half full. 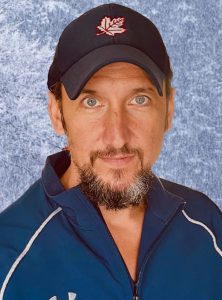 In his book, Duhacek writes that for all the physical preparation, he wasn’t far into the trek when he realized the mental and emotional toll the journey would take. He was not prepared for that.

He writes about the hundreds of people that met him along the roadside to bring food, hot drinks and to cheer him along.

“That is what made it possible. That’s what kept me going,” he said.

With this trek, he knows better what to expect.

Duhacek did that on his first trek and his feet got too hot, which caused friction and blistering on his feet, great discomfort and almost cancelled the event.

He also learned that while his legs and feet are moving, it’s his core muscles that are doing the lion’s share of the work. So he’s been training to strengthen all his muscles, but especially the core.

“If you exercise an hour a day, double it,” he said.

“If you climb five flights of stairs, do 10. And if you donate to our initiative, see if your friends will too.

“Double up and get others involved.”

Duhacek has received some high honours for his efforts, including:

But the real heroes are people fighting cancer and those in their support circles who are also deep in the battle, he said.

Anyone interested in learning more, donating to the walk, purchasing a book, or tracking his progress (he’ll be wearing a GPS) can do so at www.helpmeburycancer.com.

Duhacek will be travelling south along Highway 6 for most of this journey and expects to be in Centre Wellington on Feb. 7 or 8.