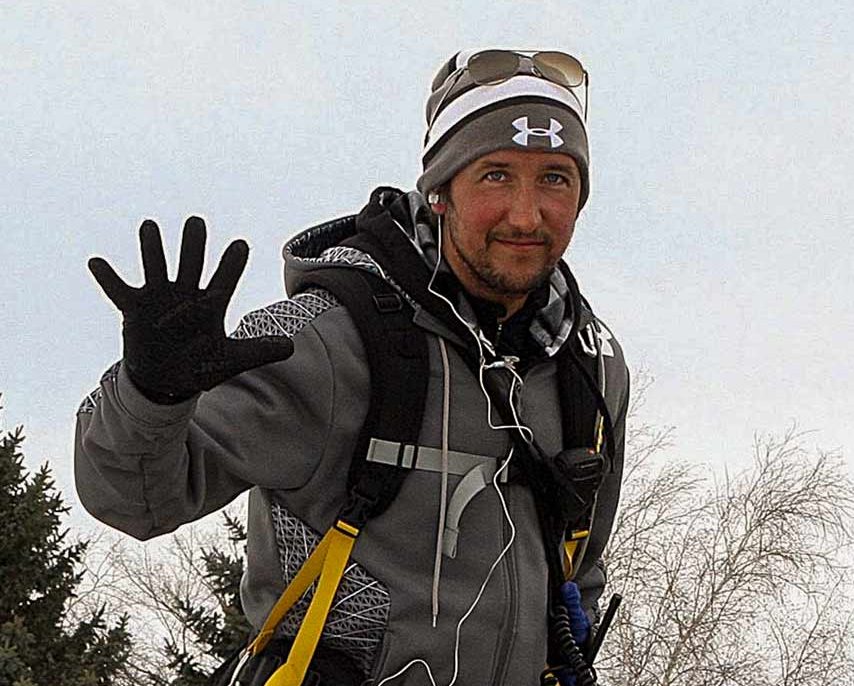 Incredible journey - Mike Duhacek of Elora has written a book outlining his experience walking across Ontario in the dead of winter to raise funds for the Canadian Cancer Society. Submitted photo

ELORA – Mike Duhacek embarked on an incredible journey in 2013 to raise funds for cancer research and now he’s written a book about his experience.

One Foot in Front of the Other – the journey of a million steps tells the true story of how difficult it was to walk from Windsor to Ottawa in the dead of winter while pulling a 125-pound sled.

During the walk, “I wanted to show strength. I was going to struggle, but I would persevere.

“The book is the raw truth – the struggle and the support I received that helped me pull the sled. It was the hardest thing I’ve ever done.”

Duhacek came face-to-face with cancer when his mother was diagnosed with a rare form of appendix cancer.

She was told to get her affairs in order as she had only weeks to live.

“That was 10 years ago this spring,” he said, adding that while his mother has had several surgeries and now has a disability as a result, she is still going strong.

Both his grandparents had cancer and later his mother-in-law was diagnosed with breast cancer.

“When I was at the hospital with my mom, I saw so many people suffering from it.

Their families didn’t know what to do. So I decided to do something big.”

He landed on the idea of a fundraising walk, but to make it extra difficult, he chose to do it in winter.

And he decided to pull the heavy sled to represent the physical and emotional toll that fighting cancer can take.

So, he attached the word “cancer” to a heavy block strapped to the sled and asked people to “help me bury cancer” which became the name of his journey.

He raised $43,000 in 24 days and estimates he took 1 million steps. Along the way he was met with supporters, who walked with him and helped push the sled up steep hills.

“Thousands of people met me by the side of the road. They brought me meals and helped me pull the sled. The support was incredible,” Duhacek said.

There was considerable press coverage and for those interviews he wanted to show strength and perseverance.

He started in Windsor and had his first media interview just outside of town.

“I was standing there after walking just 40km and my legs were shaking and my feet were bleeding,” he said.

But that brave face belied the fact that he was struggling.

Although he had trained for the physical exertion, he was not prepared for the mental challenge.

“I had to distract myself from the pain in my body,” he said.

At the time he wanted to broadcast “a message of hope,” he said, and the book is hopeful.

But it is also the honest account of his struggles, the mental fortitude he finally found, and the people who lifted his spirits and helped him cross the finish line.

One Foot in Front of the Other – the journey of a million steps is available from Amazon, Indigo and other booksellers.

A portion of all proceeds from the book will be donated to the Canadian Cancer Society.

“The true warriors are the people suffering from cancer,” he said.

“They don’t have a choice. They fight it every day.”