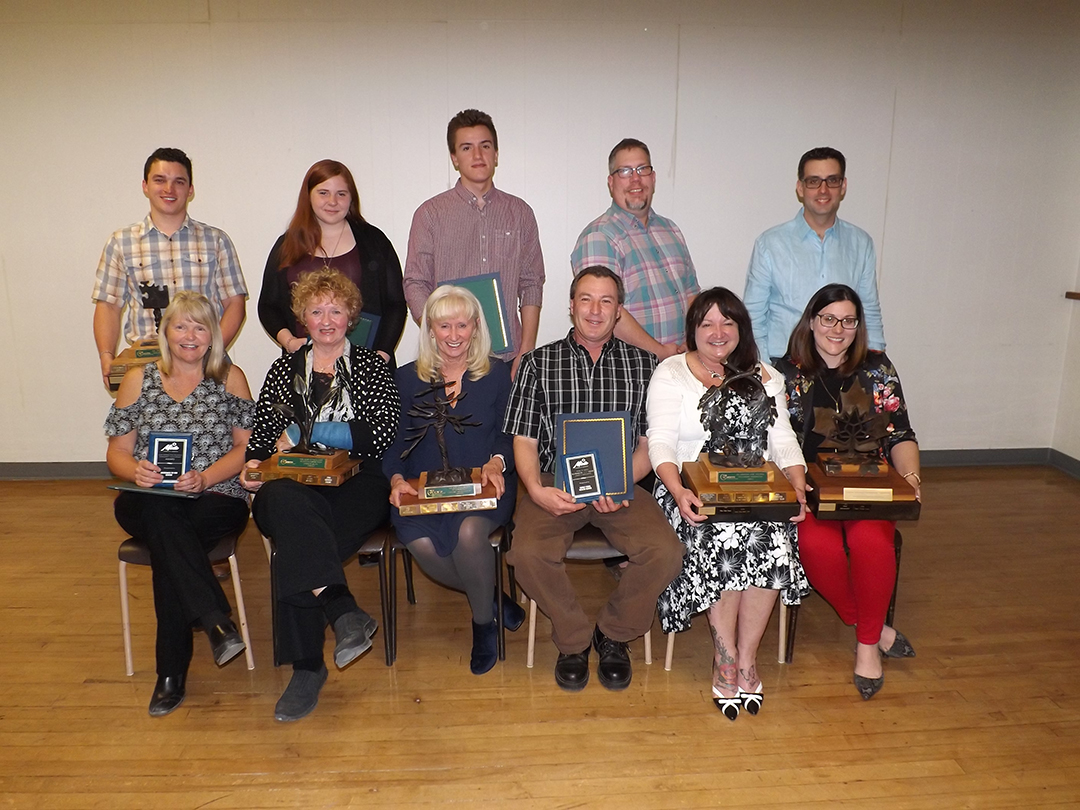 HARRISTON – An active local volunteer who initiated a massive effort to raise funds for overseas aid was presented with the 2019 Minto Chamber of Commerce Lifetime Achievement Award on April 25.

The award, which recognizes the lifetime contributions of  those who have contributed to the growth, development and betterment of Minto, was presented to Dodi Reid at the chamber’s 2019 Community Achievement Award ceremony at the Harriston Legion.

Chamber membership coordinator John Burgess said Reid has contributed to the community in many ways.

“She has been involved in most of the organizations in Minto at one time or another, helping to raise funds, advance new initiatives in Minto, helping our local hospital,” said Burgess.

“(She) volunteers with all ages from youth to seniors; (she) ties laces, coaches sports, sells raffle tickets – basically, she helps wherever and whenever needed.”

Burgess noted one of Reid’s most substantial fundraising projects is her work with WaterCan, a Canadian charity dedicated to ending poverty by helping the world’s poorest people gain access to clean water, basic sanitation and hygiene education.

“She is also a loving friend, neighbour, mother and grandmother who babysits, goes on class trips and volunteers at schools,” he continued.

“Her daughter told us that ‘Mom helps everyone with anything: housework, home improvements, meal sharing, medical appointments – she is amazing.’”

“It’s really humbling,” said Reid as she accepted the award, which came as a surprise after she was told it was one of her daughters who would be receiving an award that evening.

“What started in 2007 as my dream to raise enough money for one well quickly became my family’s, then my neighborhood’s, and then a whole community’s project. And it takes a whole community to raise $140,000 – and I didn’t do it,” she said.

The awards gala marked the 10th anniversary of the Minto Chamber of Commerce Achievement awards, which recognize local businesses, individuals and community organizations.

The award for Business of the Year Under 10 Employees went to Palmerston-based Family Home Health Centre and owner Sherry-Lynn McRobb.

The McLaughlin Financial Award for Businesses of the Year Over 10 Employees went to MSW Plastics of Palmerston. Other nominees in the category included Gramma Jo’s restaurant in Clifford and Tim Hortons of Palmerston.

The Minto Youth Action Council Award for Outstanding Young Citizen was presented to two of the organization’s own members, D.J. Campbell and Krysta Koepke. Kayley Sitt was also nominated.

The Wightman Young/New Entrepreneur of the Year Award was presented to Shawn McDonald of McDonald Chiropractic in Harriston. Mailbox Coffee was also nominated.

The OSiM Interactive Business Community Involvement Award went to Blessings to You Thrift and Gift, which donates the proceeds from its volunteer-run Palmerston store to local  causes.

Special Recognition Awards were also presented at the event to:

– organizers of the 2018 Canada Packers Reunion in Harriston;

Milestones recognized during the evening included:

– Keith Askett of Askett Appliances of Palmerston, for 50 years in business;

– Town of Minto, 20th anniversary; and