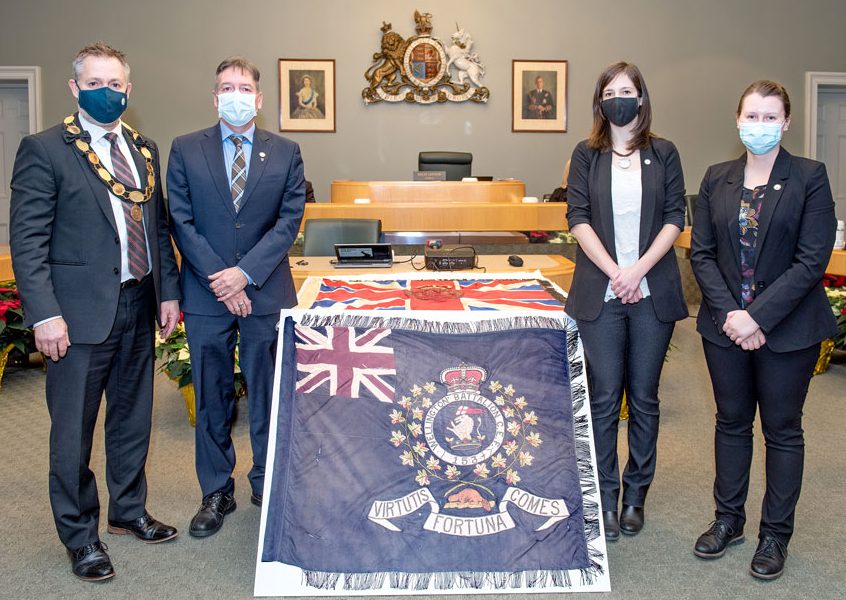 When the 153rd Battalion went overseas in April 1917 during the First World War, the colours were deposited with St. Andrew’s Presbyterian Church in Fergus for safekeeping, where they have remained ever since.

With the permission and assistance of the church, WCMA staff have borrowed the colours to allow the museum to examine and document them for the historical record.

This year the colours were displayed at the county’s Remembrance ceremony at the museum on Nov. 5

“We had out there, for the first public showing … in a long, long time, the colours are the 153rd, Wellington County Battalion,” councillor Jeff Duncan told council.

Duncan explained the 153rd was one of 260 Canadian Expeditionary Force battalions that were formed across Canada during WWI.

“The 153rd was formed about one and a half years into the war. It was comprised of men from every community across the county and … one of the four companies was men from the city of Guelph,” Duncan noted.

He said about 530 members of the battalion left for overseas in the spring of 1917.

“This was a large contingent at the time, because the county’s population was just over 44,000,” said Duncan.

“About one half of the men that served from Wellington County in The Great War were in the 153rd battalion.

The colours were officially presented to the 153rd Wellington Battalion by the women of Wellington County.

Special permission was sought and granted by the Duke of Wellington’s ancestral family for the use of the family motto “Fortune favours the brave,” on the regimental colours, Duncan pointed out.

“And the fact that they are still surviving and are still in such good shape … that’s really quite something.”

The colours have been on public display, “in the sense that they’re right in the church, and anyone attending every week on Sunday can see them,” Johnston explained.

But because the colours have been in a case hanging on an angle, “they haven’t been spread out and no one has really seen their full design, since they were put there in 1917.”

Johnston continued, “It’s incredibly special that St. Andrew’s Church has allowed us to borrow them for just over a month now, to properly photograph them, to document them and to really get a good record of them into our archives.”

Johnston said it’s important to “preserve them for the future because they’re still here 100 years on, but they’re starting to really break down and 100 years from now, it’s not certain that we will be able to still see them.”

“I’ve been at the museum for a number of years now and the 153rd Battalion is something I’ve learned a lot about,” she noted.

“And I’ve never stopped to think about where the colours were until councillor Duncan mentioned it.”

Johnston pointed out 99 of the 530 Battalion members that went overseas in 1917 never returned.

“So there were men who were part of the presentation of the colours in October 1916 who had the whole force of Wellington County rallying behind them, sending them off to war and they had a wonderful send off and they never came home,” she stated.

WCMA conservator Emily Benedict said the opportunity to examine and record the colours “helps us not only understand the physical state that they are in now, but it helps us to understand how they might continue to degrade over time.

“It’s really important to have someone in our county who takes care of our history and our past,” said councillor Chris White.

He thanked Duncan and WCMA staff for taking on the project.