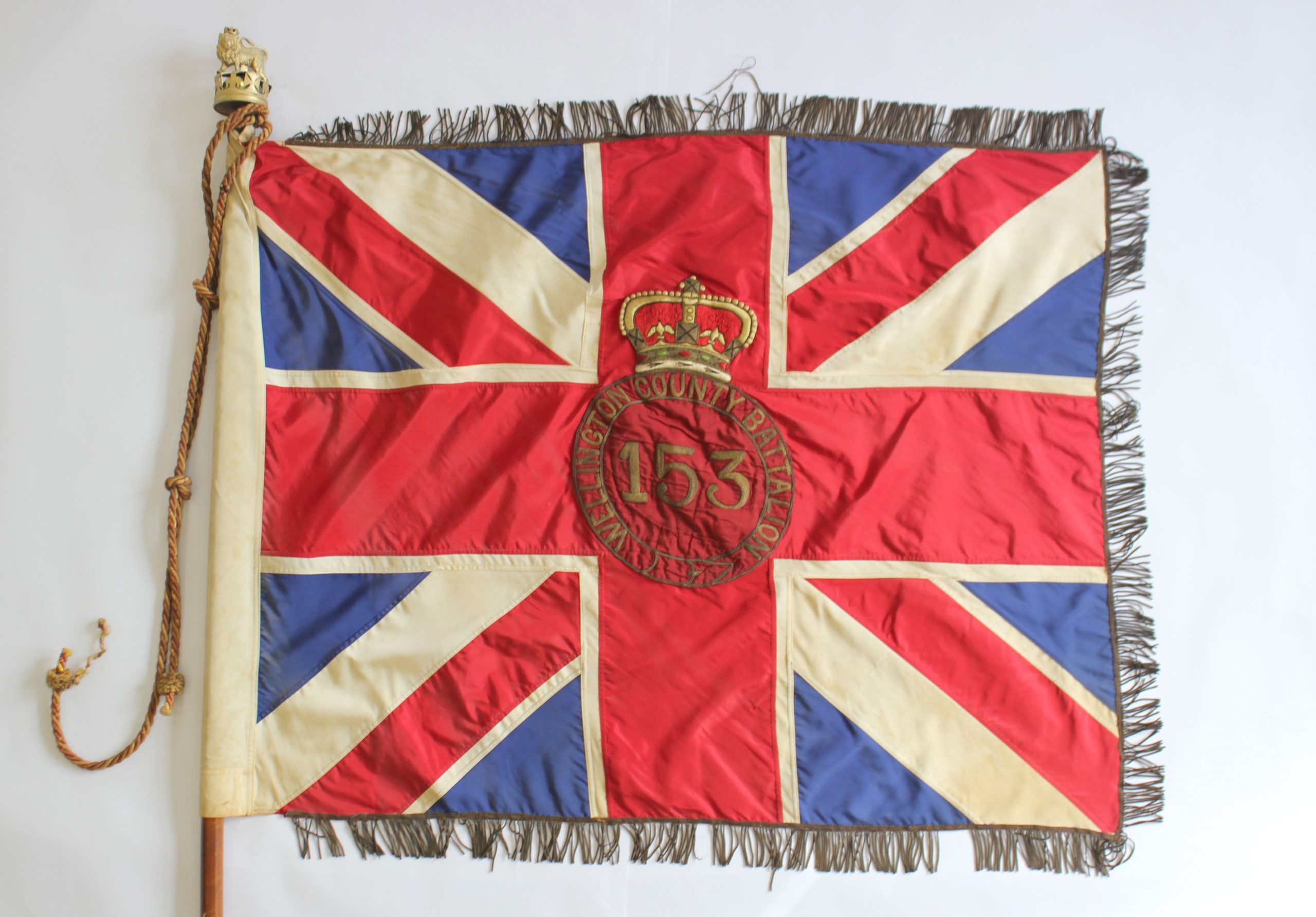 The Colours – The Sovereign’s Colour, commonly called the King’s Colour, based on the national flag with the name and number of the unit at the centre. Submitted photo

WELLINGTON COUNTY – The Wellington County Museum and Archives (WCMA) is partaking in an initiative to document the 153rd Wellington Battalion Great War Colours.

With the permission and assistance of St. Andrew’s Presbyterian Church, WCMA staff have temporarily borrowed the colours to allow the museum to examine and document them for its historical record.

WCMA curator Hailey Johnston said the museum is grateful for the opportunity to examine such a meaningful piece of Wellington County’s history.

“It is very exciting, and the county is thrilled to be a part of this,” she explained.

“The colours are a piece of Wellington County history – the fact that they’re still around, the fact that St. Andrews has been safeguarding them all these years is really wonderful.

When the 153rd Battalion went overseas in April 1917 during the First World War, the colours were deposited with St. Andrew’s Presbyterian Church in Fergus for safekeeping, where they have remained on display ever since.

April 2, 2022 will mark the 105th anniversary of the colours being presented to the church.

“We have photographs of the colours from when they were presented to the Battalion in 1916, but as they are black and white and taken from far away the details of the flags have been unknown to us until now,” Johnston explained.

The 153rd Battalion Colours consists of two flags, the Sovereign Colour and the Regimental Colour.

The Sovereign Colour is based on the national flag, with the name and number of the unit at the centre.

The Regimental Colour carried the motto of the 153rd at the centre, “Virtutis Fortuna Comes” (Fortune Favours the Brave) along with Canadian symbols like the beaver and maple leaf.

Colours is the term used to describe the ceremonial flags carried by a regiment, Johnston explained. These flags are symbols of pride and loyalty to the Crown, nation and regiment.

While an important part of the project is to document the colours, the real purpose is having local war dead from the First World War continued to be remembered. 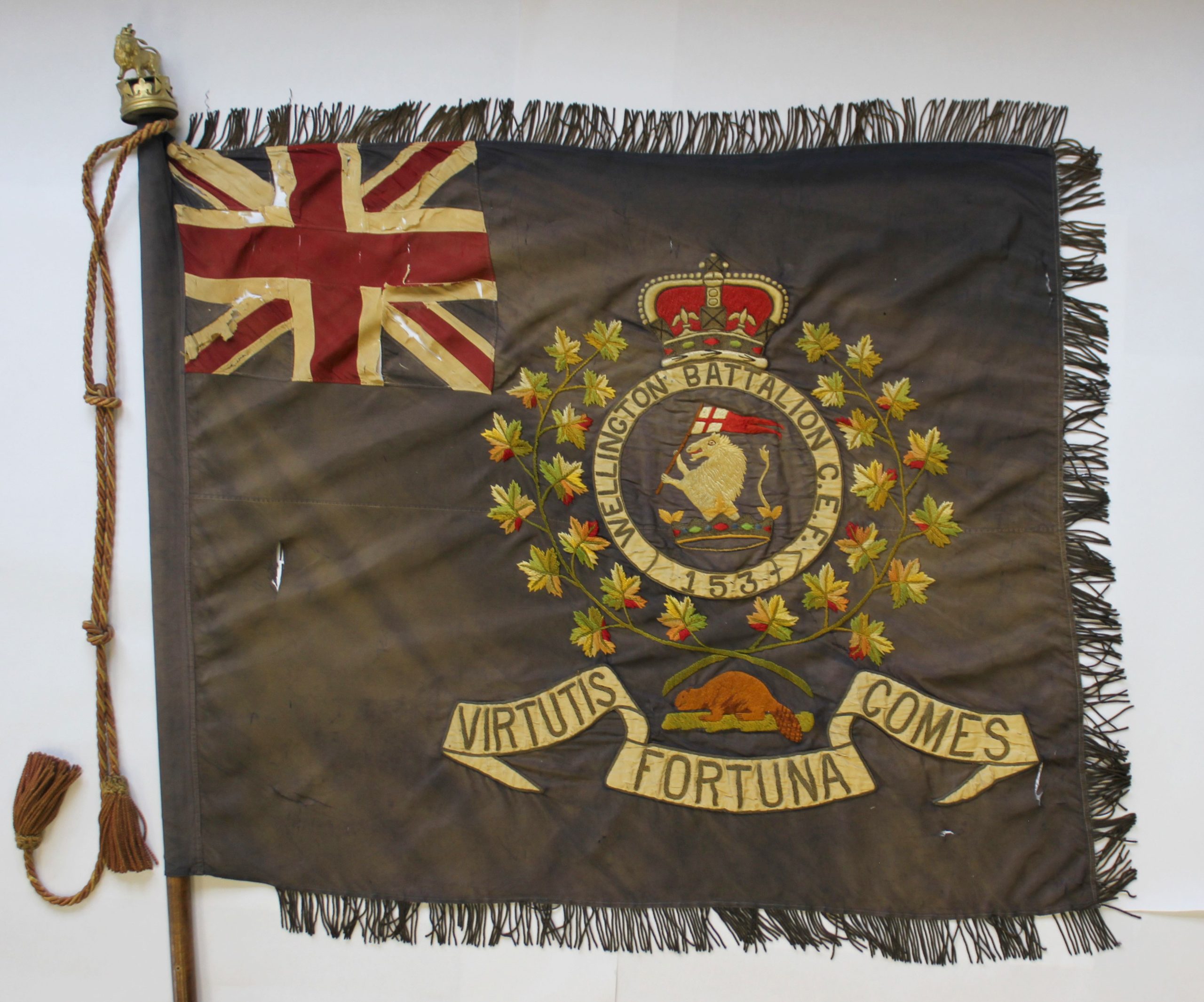 The Regimental Colour, which carried the motto “Virtutis Fortuna Comes” (Fortune Favours the Brave) along with other Canadian symbols like the beaver and maple leaf. Submitted photo

“It’s a legacy,” Johnston explained. “We’ve had some anniversaries and recent memory of a lot of First World War battles and the colours have never come up, they’ve sort of passed out of our common memory.

“St. Andrews has known that they’re there but to the general public this is an opportunity for everyone to rediscover this sort of lost history, and we’re putting our skills towards helping preserve the colours moving forward.”

The 153rd Battalion was made up of local men from across Wellington County, and the colours not only represent the soldiers but the communities of the county and the sacrifices they made.

“Until now, we couldn’t be sure of the original colours of the flags or how they were made,” Johnston explained.

“We are so pleased to have the opportunity to photograph and record these details now.”

According to Johnston, the colours are still on their original wooden pikes, which are topped with a lion and crown finial. Having been made with weighted silk, a delicate fabric that breaks down over time, she said both flags are very fragile.

Johnston said initially, the hope for the colours was that they’d be on display at the WCMA, as part of the museum’s Remembrance Day activities this year, but after reviewing the condition of the flags, it has been determined that will not be happening.

“I know that was the wish when this idea was put forward, but it all hinged on the condition of the colours and they’re not in good enough shape to be out is our current fear,” Johnston explained.

“As you can imagine, them being over 100 years old … they’re a little worse for wear.”

Instead, Johnston explained, the church has loaned the museum the colours temporarily while the conservator takes a look at them to see what can be done at the museum to continue their preservation.

“This is a project that we’re working on in cooperation with St. Andrews Presbyterian Church. We’re looking at the colours and trying to give them a hand.

“Because they do have quite a bit of damage on them. They’re over 100 years old, that’s sort of to be expected, so it’s an ongoing process.”

Johnston said the museum will continue to keep the public informed about the documentation process through its website and social media.

The museum’s conservator will be noting what materials the flags were made with, what their original colours were – and how they are fading with time – and how they were pieced and sewn together.

Given the fragile state of the colours, Johnston said the museum will be working closely with the church and making recommendations to determine the safest way to display them in a way that’s in the best interest of the artifacts.

The museum planned to have the colours out for visitors to see on Nov. 5 for its Remembrance Day ceremony.

“They’re just on loan temporarily,” she noted. “When they go back to the church, we’ll work with them to give them some advice on how best to display them to extend their preservation.

“At the end of the day, yes, they’ve survived for 105 years but we want them to survive for another 105 and we are very much in the business of always putting the artifacts first.”