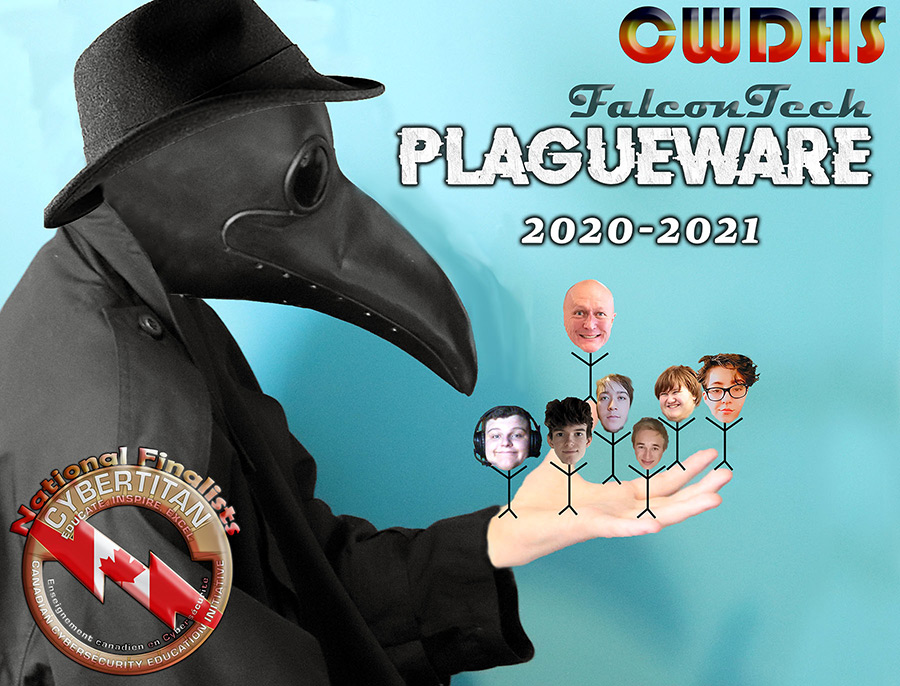 "Plagueware" is one of two CWDHS cybersecurity teams competing in the upcoming 2021CyberTitan IV National Finals, a virtual cybersecurity competition. The competition takes place from May 17-19. Submitted image

“Falcontech Plagueware” is a team made up of a diverse group of students, while the “Terabytches 3.0” are an all-female team making history in a competition usually dominated by male students.

Although there was some controversy over the all-female team’s name, King said his student’s chose the name as a form of empowerment.

“The percentage of women in cyber is very low, as it’s just around 20 per cent,” King said.

King has spent years encouraging more girls to take computer technology courses in an effort to level the playing field.

King reflected on the unique and diverse make-up of this year’s teams.

“This team is a cast of characters,” he said.

“They are truly a representation of our small town with students from every pathway on the team.  The team is neuro-diverse, gender diverse and that mix gives them a unique approach to the competition.”

King said every other school in the national finals is an academically focused, specialist urban school, that selects students for entry.

“As you know, our composite high school serves our entire community, but this team shows that this diversity is a strength.”

The team created a poster that hints at their unique approach to the competition.

“One of our competitors was wondering why all the other teams look serious,” King said.

“We manage to be competitive without making it all about winning, which is the key to not just this competition but also a happy life.”

King said the Cyber Titan cybersecurity competition is based off of the U.S. Air Force’s “Cyber Patriot” program.

“Essentially you go into a ‘hacked computer’ and get points for putting it back together and securing the operating system,” King said.

King said that to qualify for nationals, the teams set up a lab at the school.  The students “secured” systems in real time in their teams of four to six.

The Plagueware team finished second out of all of the eastern Canada teams.

The competition is one of many that King has had his students enter into.  “CanHack” is another competition he has been involved with.  It’s run by Ryerson University.

King said “CanHack” is much more computer science and math-based, while “Cyber Patriot” has a more hands-on approach to it.

“These competitions are using the same skills as hacking, with the difference being that you are ‘hacking’ as the good guy,” King said.

The CyberTitan IV National Finals take place from May 17-19.