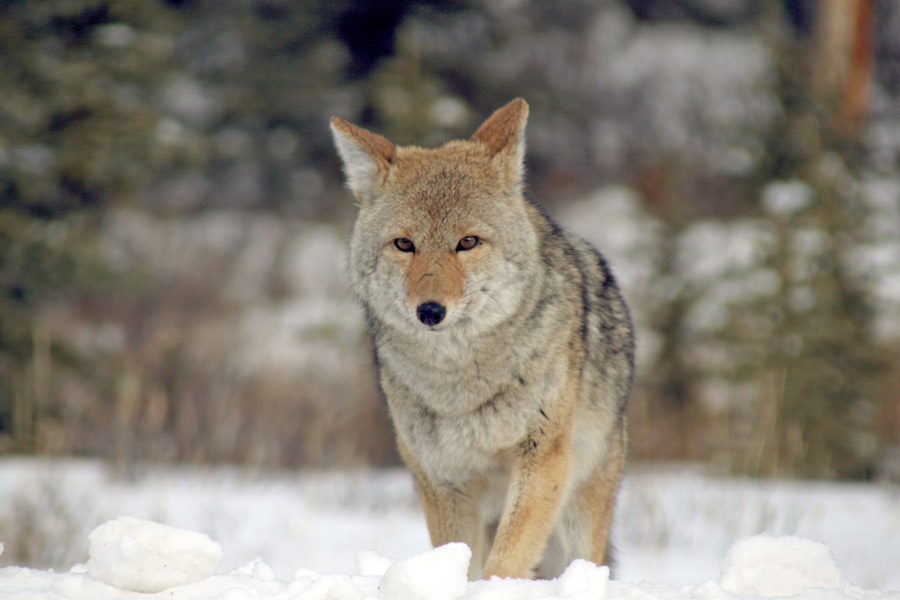 Abundant - Coyotes are thriving in southern Ontario. Photo by Simeon at Free Images

WELLINGTON COUNTY – Residents should take precautions in dealing with Wellington County’s active coyote population, according to the Ministry of Natural Resources and Forestry (MNRF).

While there are no recent reports of incidents involving coyotes, pet owners should remain vigilant, especially since coyotes are willing to venture into urban areas.

“They are getting brave,” said Steve Reed, who saw a coyote going into backyards on Steven Way in the north part of Elora on Jan. 7 and tweeted to alert neighbours.

He said he has often seen coyotes while travelling to work along Wellington Road 22, while he has not seen deer, which used to be common along that road.

There was also a recent coyote sighting in the Fifth Line area north of Belwood Lake.

The MNRF district office has not received any calls lately regarding coyotes in the area, and there is no evidence to suggest an increase in the coyote population, according to spokesperson Jolanta Kowalski.

“Coyotes have adapted well to urban environments and are found in both rural and urban settings,” she said.

“Coyotes can be found across Ontario but are abundant in southern agricultural Ontario and urban areas. Aggressive behaviour towards people is unusual for coyotes, but you should always exercise caution around wildlife.”

Wellington OPP spokperson Cheri Rockefeller said police are not aware of any increase in coyote interaction with humans.

For a concern about a coyote that appears unwell or injured, call the non-emergency OPP contact number, 1-888-310-1122.

The MNRF offers the following guidelines to help prevent conflict with coyotes:

– do not approach or feed them;

– secure garbage, compost and other attractants;

– use deterrents such as motion sensors;

– keep dogs inside at night and clean up after your dog, since coyotes are attracted to dog feces;

– spay and neuter your dogs. Coyotes are attracted to, and can mate with, domestic dogs that have not been spayed or neutered;

– consider a fence two-metres high that extends at least 20 centimetres underground, and a roller system on the top so animals can’t gain a foothold;

– if you see a coyote, wolf or fox, keep your distance and the animal will most likely avoid you;

– do not turn your back on or run from a wild animal. Back away from the animal while remaining calm. Stand tall, wave your hands and make lots of noise;

– where possible, bring livestock into barns or sheds at night, and use guard animals, such as donkeys, llamas and dogs; and

– as a last resort, a farmer may humanely kill or trap wolves, coyotes or foxes that are damaging or about to damage their property (if  using a firearm, there are regulations and local bylaws to be followed).

Landowners may also hire an agent to act on their behalf.