WELLINGTON COUNTY – Confirmed COVID-19 cases and hospitalizations are down for the first time in weeks in the Wellington-Dufferin-Guelph Public Health (WDGPH) region.

This marks the first decrease in confirmed cases in the region in about a month.

Local cases essentially doubled in July – from 153 to 300 between July 3 and 27 – following a steady decline in May and June.

In Wellington County, there are 75 known active cases as of Aug. 3, essentially unchanged from 76 a week ago. 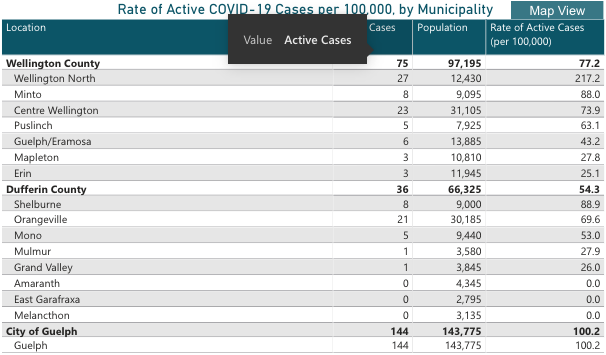 Twenty-three people are hospitalized with COVID-19 across the region as of July 27, with none in intensive care units [ICU] – down slightly from 26 a week prior (one in an ICU).

Hospitalizations have increased dramatically since the end of May, when there were five people hospitalized with the virus (none in an ICU).

Fourth doses are now available for all Ontarians aged 18 to 59, as are Moderna vaccines for those aged six months to five years.

There have been no new COVID-19 deaths in the region this week.

To date, a total of 165 deaths across the WDGPH region have been attributed to COVID-19, including 55 in Wellington County.

As of July 29, there are 12 active COVID-19 outbreaks at health care facilities in the region, including the following in Guelph/Wellington: