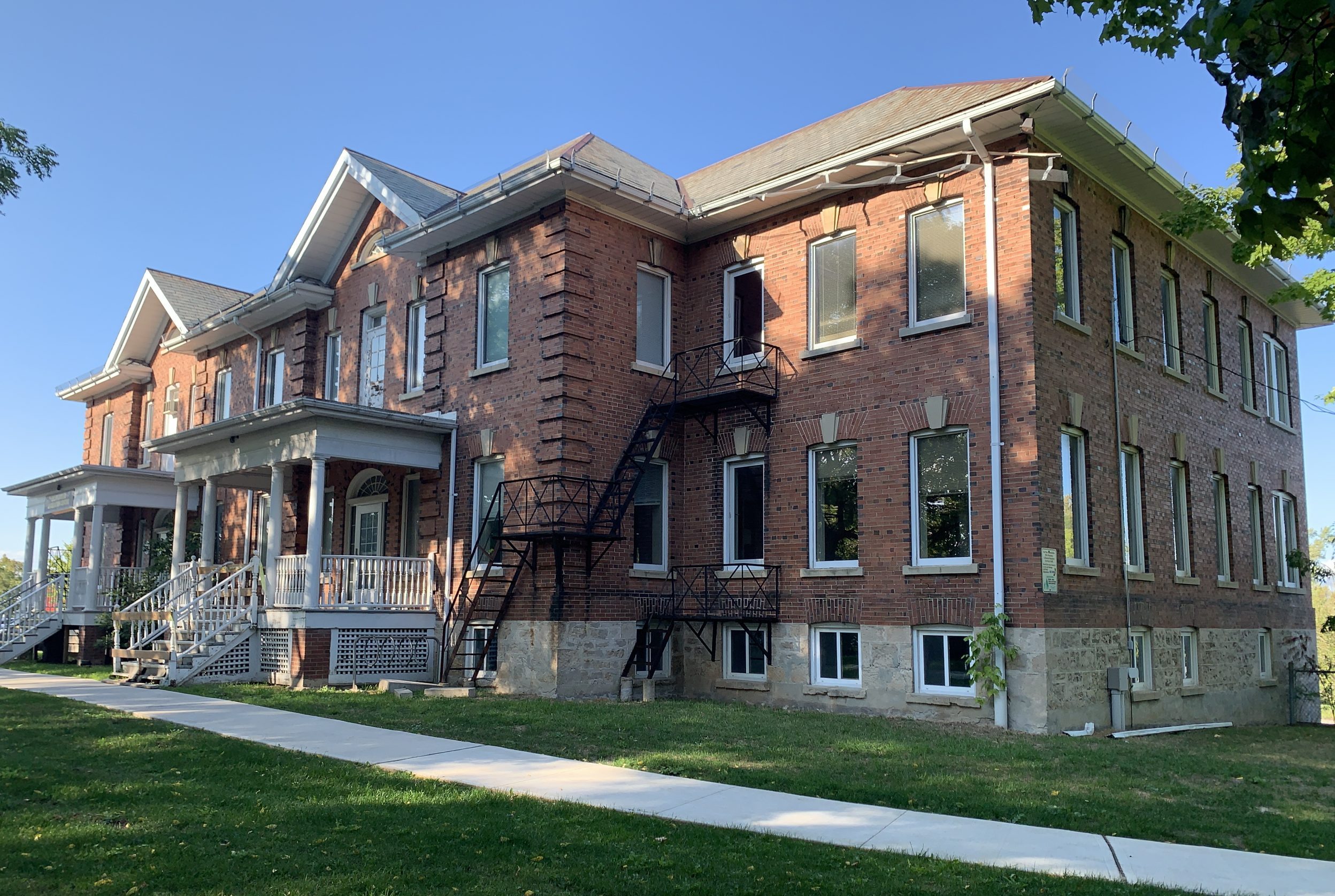 The two-storey building located at 65 Delhi Street in Guelph. (Photo by Jordan Snobelen)

GUELPH – A recent Ontario Land Tribunal ruling allowing Wellington County to proceed with turning a vacant Guelph building into transitional housing for the homeless has some Guelph residents rattled and the municipalities celebrating.

Near the end of 2020, a report stating a two-storey building at 65 Delhi Street in Guelph would be declared as surplus inventory piqued the interest of county housing director Mark Poste and then social services administrator Eddie Alton.

Tasked by the province with managing housing-related social services for both Wellington and Guelph, county staff saw an opportunity for transitional housing.

The county had been running a communal living and temporary accommodation pilot at Loyola House with the Ignatius Jesuit Centre that Poste and Alton wanted to keep going.

In March 2021, the county purchased the Delhi Street property for a “nominal amount,” according to county treasurer Ken DeHart—the aim being to renovate the vacant building to accommodate 36 chronically homeless persons (since reduced to 28) with supports provided on-site.

The project would help address some of the eight objectives—one of which is to end chronic homelessness—in the county’s Guelph-Wellington Housing and Homelessness Plan, known informally as “A Place to Call Home.”

Because the property has “specialized community park” zoning, the city needed to approve a zoning bylaw amendment for the project to move ahead—which the county applied for in April 2021, requesting the land be rezoned to “specialized infill apartment zone.”

Some neighbours living on adjacent and nearby properties had questions about what the plans would mean for their neighbourhood and later formed the Delhi Eramosa Neighbourhood Advocates (DENA) group.

Stephen Kilburn, one of the founding members and a 15-year resident living on Delhi Street, said residents are not concerned with transitional housing itself.

However, they are concerned with how programming and supports would be delivered, the number of residents, and pedestrian access—particularly along the only sidewalk to the property, running between a mixed-tenant commercial building and a detached residential home. 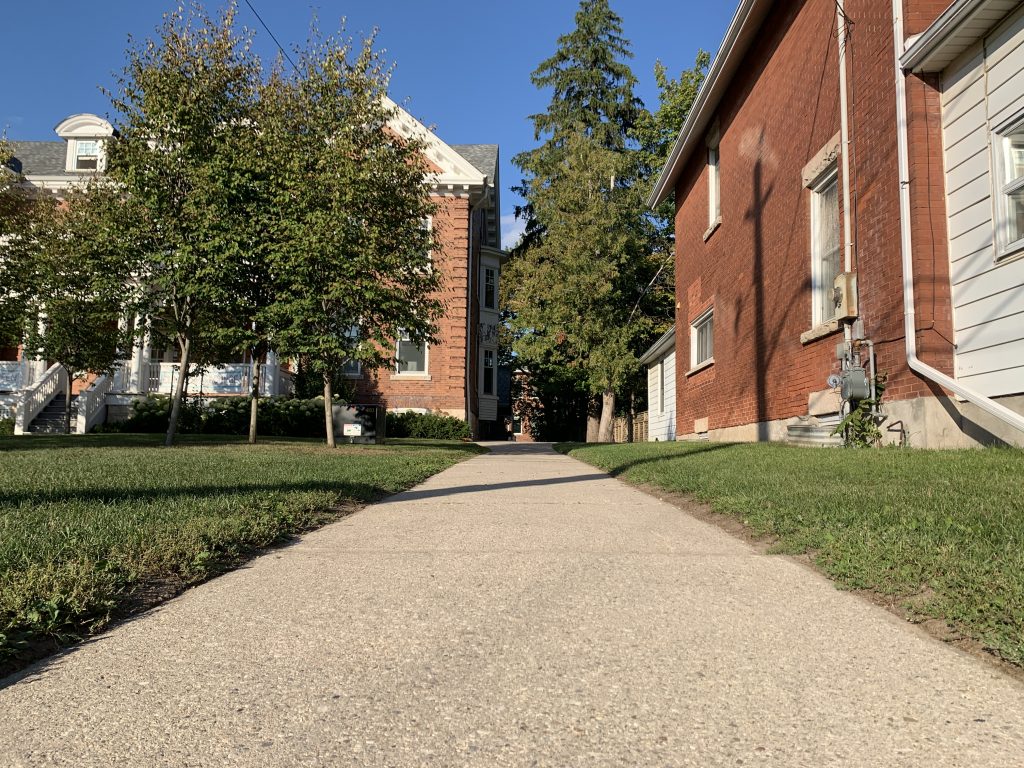 This sidewalk is the only access connecting directly with Delhi Street. The sidewalk runs between a mixed-tenant commercial building on the left and a detached residential home on the right. (Photo by Jordan Snobelen)

Despite delegations from some neighbours expressing concerns, Guelph council voted unanimously in favour of approving the county’s requested bylaw amendment.

Feeling their concerns had not been adequately addressed, DENA filed an appeal with the Ontario Land Tribunal in August 2021, leading to the project’s 14-month hiatus.

“All of that taken together didn’t lead to people feeling like this was going to be a good, well-run facility,” Kilburn said.

He added the proposal “sounded an awful lot like a frightening shelter as opposed to a facility that would give people a leg-up and help them out of their circumstance.”

Last month, slightly over a year after the appeal was filed, the case was finally heard by the tribunal.

Over five days, between Aug. 8 and 12, DENA, the city and the county, represented by their lawyers, presented arguments remotely by computer, calling their respective experts to testify and be cross-examined.

Central to the hearing were concerns that transitional housing would “create conflict [and] incompatibility with the existing community,” prevent pedestrian access to green space around the property, and that the building wasn’t suitable for the amount of people who would be living there. 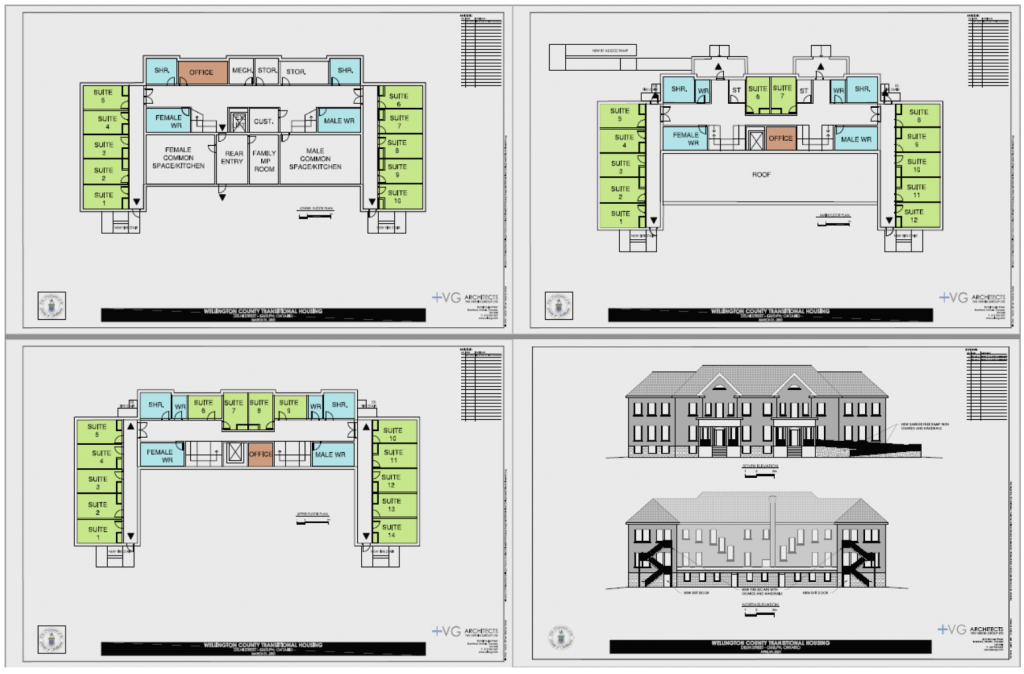 Draft plans for transitional housing at 65 Delhi Street in Guelph.

More specific discussion during the hearing focused on parking availability, safe and efficient access to surrounding green space for children of the nearby First Steps Daycare (a DENA member), and a lack of detailed floorplans.

On Sept. 13 the tribunal dismissed the appeal.

The 27-page decision stated the tribunal preferred expert opinions and evidence from the municipalities and found DENA’s evidence “did not provide a planning basis to refuse the [zoning bylaw amendment].”

The tribunal commended the neighbourhood group’s efforts, but concluded: “Overall, the proposed [amendment] and the development that it permits represent good planning in the public interest and address the urgent need to support the county in homeless housing.”

By the evening of Sept. 14, news of the tribunal’s decision hadn’t fully circulated among surrounding neighbours on Delhi Street and Glenhill Place to the north.

News of the tribunal’s decision was met with high emotions and astonishment.

Concerns of the stereotypes associated with homeless persons struggling with addiction – increased crime, noise and vandalism, to name a few – were mentioned by neighbours spoken with for this story.

Mark Enchin, a Glenhill Place resident of 15 years, shook his head in response to the decision.

“You don’t put it beside a daycare, I mean, you just don’t do that,” Enchin remarked.

“What family would want to put their child there not knowing what kind of people these people are?”

Enchin believes the solution is for the county to relocate homeless persons to housing in what he said are more suitable areas.

“Put them somewhere else,” he remarked. 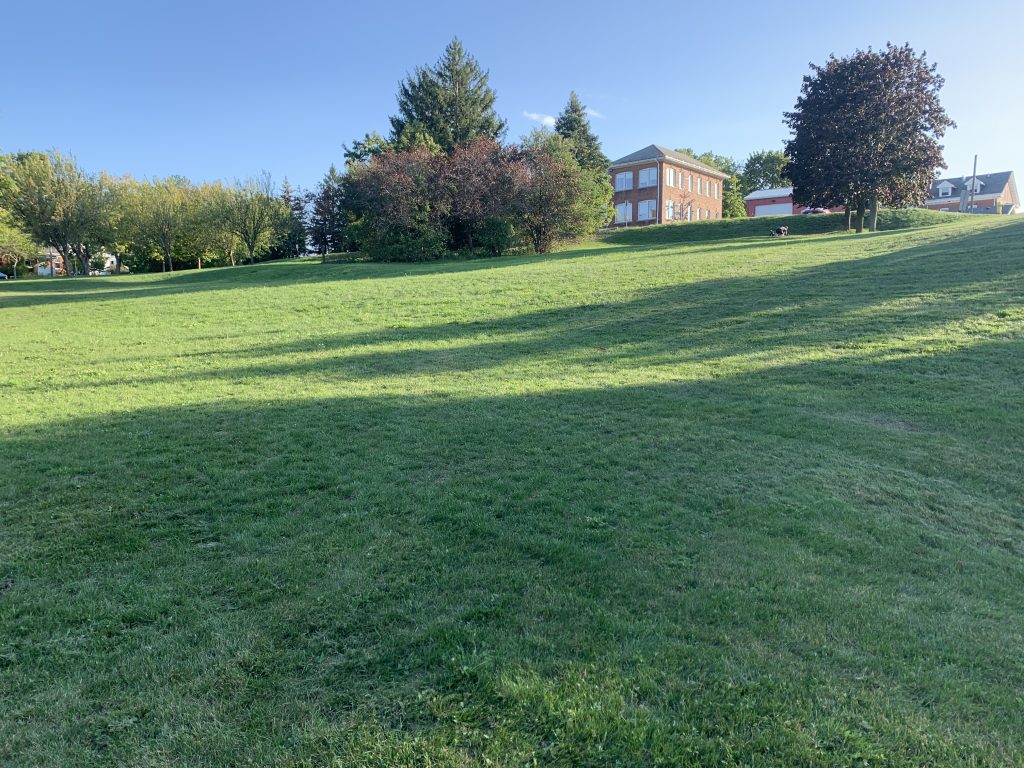 Open green space located to the north of 65 Delhi Street in Guelph. The open land is retained by the City of Guelph and not included in the property sale. (Photo by Jordan Snobelen)

Two longtime residents living on Delhi Street, who wished not to be named, were troubled and “scared” at the thought of living by what they imagined would be a “halfway house.”

With so much time having lapsed since the project was originally announced, they assumed the idea had faded out.

However, both seemed to warm to the idea of transitional housing, if only a little, once nuances of the plans were explained.

Maybe it’s not as bad as we imagined, a woman said.

Once county housing director Mark Poste found out about the decision, he says he was “ecstatic.”

“It’s great work that needs to happen … that’s why we pushed for it in the first place,” said Poste, who was called by the county as an expert witness during tribunal hearings.

Transitioning from homelessness, where services are available and focused, to living independently and self-sufficient can be an insurmountable hurdle for some, Poste explained.

Transitional housing is geared to the chronically homeless who need supports around them, specifically those on the county’s “by-name list” which prioritizes people based on data such as needs and health.

Currently there is no such housing available in the city or county for adults aged 25 and over.

Poste emphasizes it’s still a form of emergency shelter, and not a solution to homelessness.

“We have 130 people experiencing chronic homelessness in our communities,” he said, adding, “they’re people, so each one of those is big.”

“The solution to homelessness is housing,” he asserted.

Projects such as this can “very quickly help us bring down [those numbers].”

Eventually, residents of 65 Delhi will work with housing stability workers, on-site around the clock, for one to three years to learn about themselves, set goals, receive care, and obtain skills, hopefully enabling a transition into permanent housing – be it in the community, or in a permanent supportive housing environment.

Once a project completion date is firmed, county staff would begin addressing specifically who could be a fit for the location.

“It’s going to be dependent on who’s there at the time and their needs that they present and being on the by-name list,” Poste said. 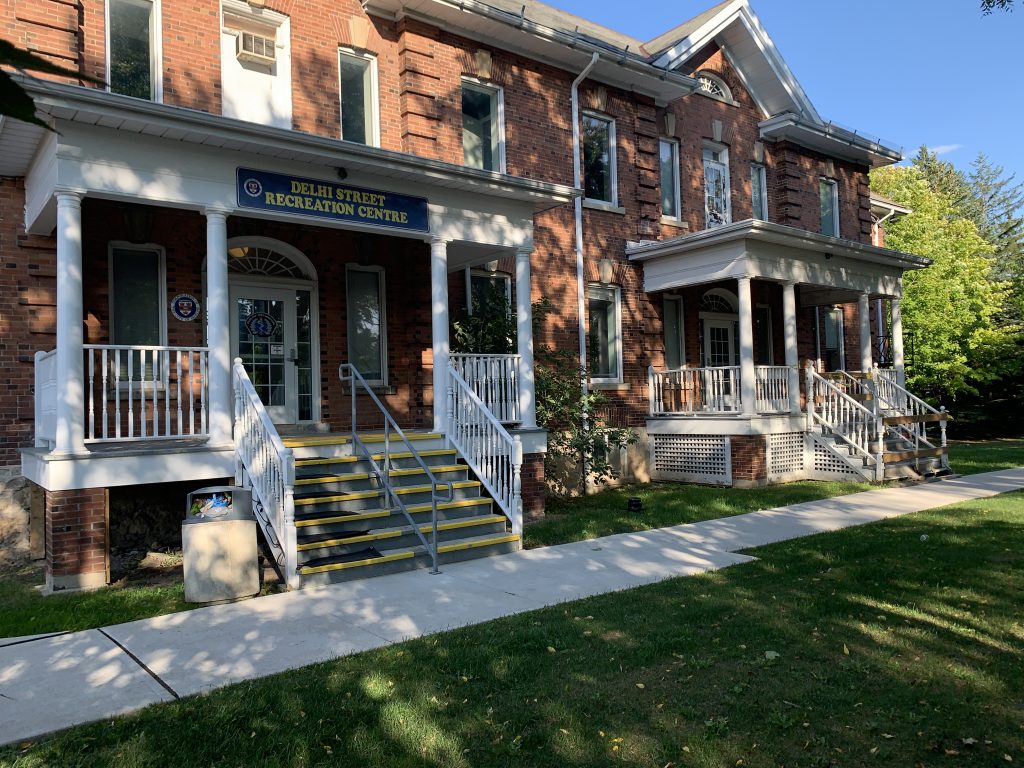 The building at 65 Delhi Street in Guelph was once used as a recreation centre and as administrative offices for Guelph-Wellington Paramedic Services. The property is 1.28 acres in size. (Photo by Jordan Snobelen)

The county also plans to bring in outside addictions, health, employment, and life skills services.

During the tribunal hearing, Poste said the county is willing to work with neighbours to “achieve the goal of successfully housing residents on the [property].”

The county noted a willingness to work with DENA and the public at large around a “crime prevention through environmental design” review and the site plan process, as well as a public liaison committee.

The hearings were taxing, Poste acknowledged, but it’s “all part of appropriate processes … to protect people’s rights.”

If it weren’t for the appeal, the project likely could have been completed within a year, according to Poste.

“We’re going to bring back the design team, get everything together, start getting towards our final design that will help to inform the costing and specs for the buildings,” Poste said.

He couldn’t suggest a timeline for the project completing, but said “as soon as possible.”

Kilburn suspects DENA will have to make the first move in working with the county – “given the nature of our interaction with the county to date” – to resolve outstanding concerns.

“Ultimately, we as much or maybe more than anybody, want to see this be successful,” he said.