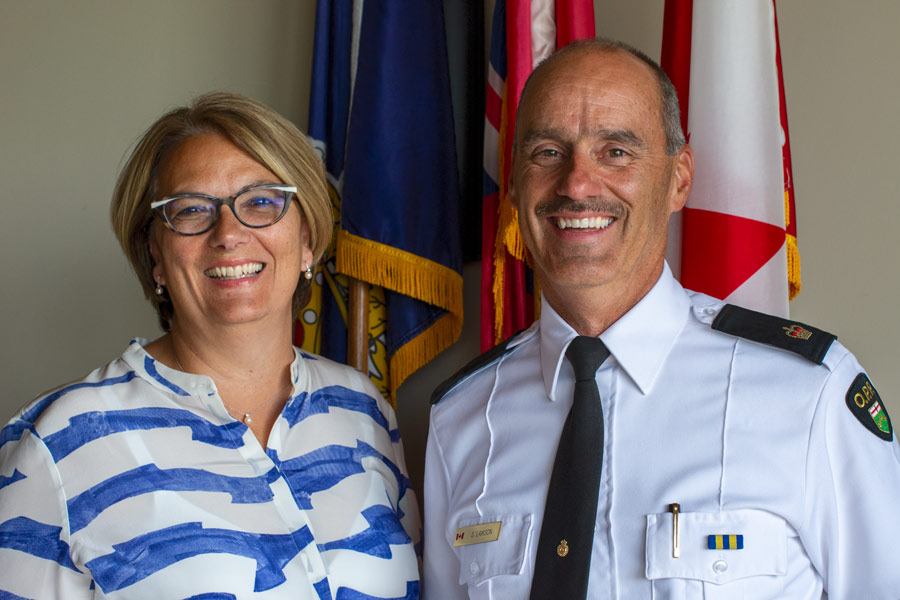 WELLINGTON COUNTY – The community has asked for help with suicide prevention and Wellington County is stepping up.

What started out as a mental health discussion with TSN’s Jennifer Hedger and Michael Landsberg last November has ballooned into a county-wide initiative to address mental health – suicide in particular.

“They sort of made a commitment that night … to stand up and say we’re going to take a leadership role in the issue of suicide in the community,” explained Cecilia Marie Roberts, suicide prevention lead for CMHA WW and Wellington County.

She was hired as a result of the Here4Hope event to head the “Here4Hope: Working Together to Prevent Suicide” initiative, a three-year partnership between CMHA WW, Wellington County and the Wellington County OPP.

“You saw youth there, you saw older people there and … I was so floored at people just standing up and saying things about their own lives that were very vulnerable,” Linton said. “It was really clear that there is such a need for support and seeing the county getting together with the OPP, getting together with the CMHA, that’s what it’s going to take to bring some positive change in this area.”

She began working on the strategy in January.

“I sort of look at what does the research say in terms of how do we approach these problems and then what is the local context, what’s happening locally?” Roberts explained. “Is there any kind of anomaly that’s happening that might be driving or contributing to suicide?”

She began by talking to people who had attempted suicide, people who were bereaved by suicide and service providers.

“I laid out what I believe are the components of suicide prevention activities that really any community could use, but specifically we could use here in Wellington,” said Roberts.

Linton said one of the county’s concerns is people struggling when they know somebody who is in depression or moving towards suicide or has attempted suicide or who has died by suicide.

“That has lifelong impacts and it’s not easy to know what to do in those situations,” he said.

“This project is finding real actions that community organizations and individuals can take to make a real difference in the lives of people in this community.”

One of those actions is “post-vention” initiatives, which is where the OPP comes in.

The Wellington County OPP applied for a three-year provincial grant of $180,000 per year to implement a Suicide Prevention/Post-vention program.

“Post-vention is what do we do in the aftermath of a suicide,” Roberts said. “Once someone dies what do we do to respond and to support people that have been affected.”

This step has been lacking in Wellington County.

“We’d go, we’d deal with things, Victim Services would help at the very start and then Victim Services at some point would sort of disconnect, if you will, and then go on about their business,” Lawson said.

“There was nothing long term. We tried to have some connection with us and sort of as a victim liaison officer and we were just gapping.”

While the OPP has incorporated IMPACT, a team of CMHA clinicians that accompanies officers on mental health calls, Lawson said they’re too busy to take on the suicide post-vention initiative as well.

“We know that those people that have been affected, they themselves have an elevated risk for suicide because they’ve been touched by suicide, particularly family and people that are close,” Roberts said.

“In a small community where everybody knows everyone … that affect can kind of spread a little further because people know each other and they’re more connected.”

While Lawson is still waiting to hear about the funding he said the team could consist of an OPP officer, a clinician and lived-experience peer supporters.

The team will help the bereaved or survivors and stay in contact for up to nine months, offering support and connections as needed.

Roberts said making these connections in the aftermath of a suicide is critical.

“We know this from our Victim Services research that if you make a good connection right on the scene with somebody, if they have a good, positive experience with that connection from supportive-type services, they will continue to engage,” she said.

Once the funding is approved, the hope is to have the post-vention team up and running quickly.

The Here4Hope initiative is also going to develop a wellness plan for the county corporate structure.

“We want to make sure that we’re looking after our own people and we’re providing an opportunity for them to have support if support is needed for them and their families,” Linton said.

Roberts said the county wellness plan will be transferable to other businesses and organizations.

“We will pay close attention to how we do that and what that looks like with the hope that the member municipalities and … other small business can pick up pieces of it and use it pretty easily, so that we can really spread the wealth of that work across all employers,” she said.

“It’s not just about the health and the mental health system … there is a role for everyone.”

The internal framework that Roberts is working on aims to make Wellington County a community where suicide is prevented and “everyone lives with hope and resilience.”

The framework has 11 different components:

– education and training to develop community knowledge, attitude and skills to identify individuals at risk and to improve the way mental health and primary care providers recognize and treat vulnerable individuals;

– create and implement media guidelines to ensure safe messaging and portrayal of suicides;

– reduce the availability, accessibility and attractiveness of the means to suicide;

– increase quality and timeliness of local data on suicide/attempts as well as ways to identify vulnerable groups, individuals and situations;

– promote increased access to comprehensive mental health and addiction services for those vulnerable to suicidal behaviours;

– ensure communities have capacity to respond to crises and that individuals in crisis have access to emergency mental health care;

– create an oversight body that will be responsible for the governance of the suicide prevention framework; and

– use a holding space for those that are touched by suicide as a way to offer unconditional support free of judgement and the need to control.

Roberts said she spoke with members of the community and learned that talking about suicide is important, as is listening non-judgementally and connecting with services.

“Ideally there’s all kind of things happening in these (areas) already, but we’re going to try and ramp it up and connect people doing the work to make things stronger,” Roberts said, adding there’s likely aspects of the framework already happening in the community. The goal is to have something from each component happening at the same time.

She’s currently working on a website that should launch later this month.

While the initiatives will be geared towards all Wellington County residents, Roberts said about 75% of all people who die by suicide are men and 25% are women.

“The rates in Wellington are not disproportionate to the rates that we see across the country,” she said. 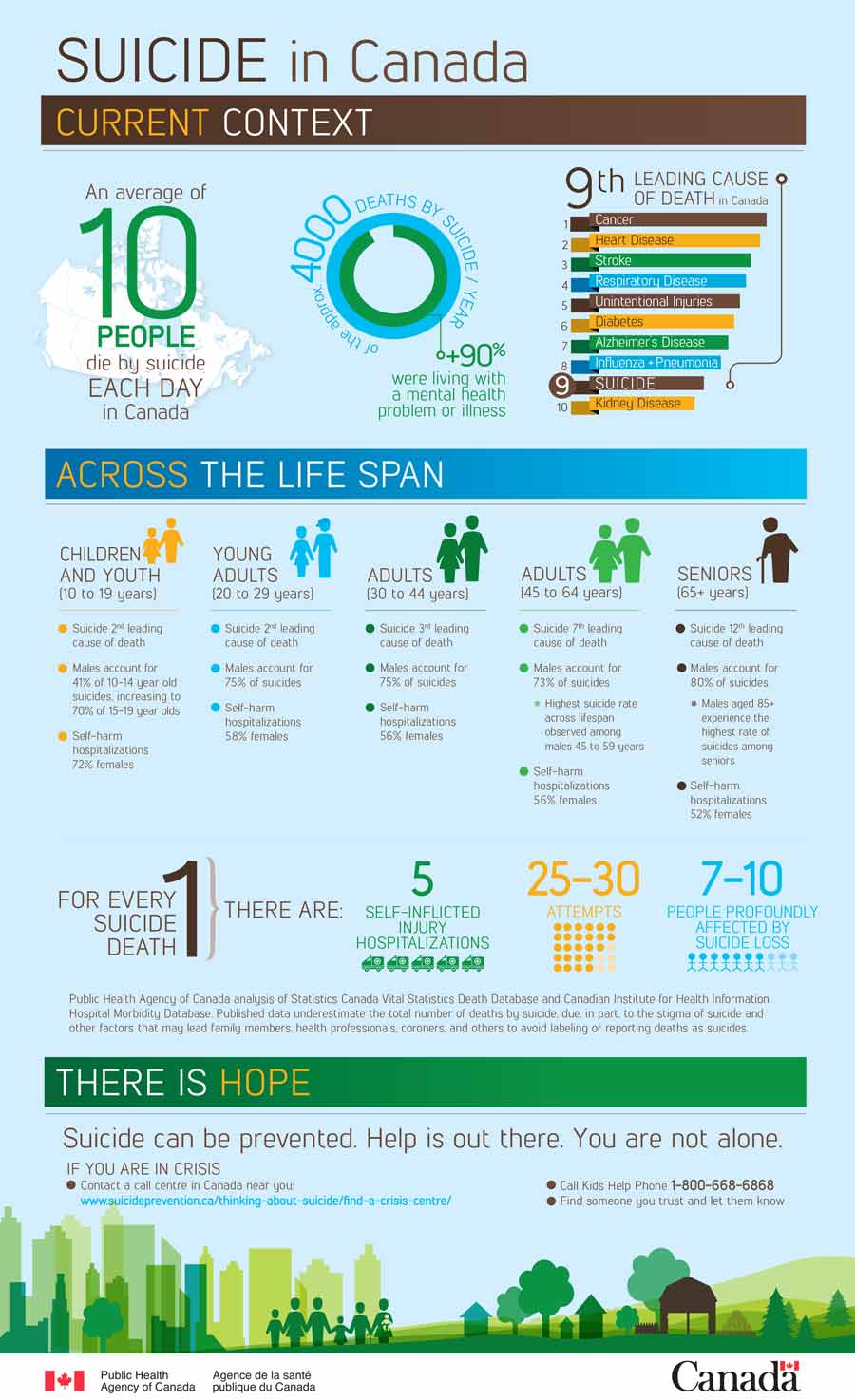 While the largest group of people who die by suicide are middle-aged men, Roberts said suicide is the second leading cause of death in youths aged 24 and under.

“That is why we are obviously concerned about it,” Roberts said. “That is also the time, maybe say from 12 to 24, where we have the onset of mental illness.”

She also said that’s the time when the brain is developing and youths may be suffering in silence, not having a frame of reference to know what is wrong.

Roberts said 70% of high school students have suicidal thoughts – but most are fleeting.

In Canada, suicide is the ninth leading cause of death for the entire population.

This is why Roberts said it’s important to talk about promoting life, not just about preventing suicide.

“We have to be explicit with (kids) but we also have to focus them on the building of the skills and the resources and the resiliency and the connectedness and youth engagement.

“Good strong youth engagement is one of the most protective things we can do for kids.”

Lawson spoke about the importance of connectedness when the OPP experienced two deaths by suicide in the Wellington County detachment and when officers are experiencing tragedy every day.

“While we’ve been touched locally and internally, we can’t ever stop responding,” he explained. “You just can’t turn it off. You just can’t put the closed sign on the window and give us a couple weeks to regroup.

“Like, it just keeps coming and that … repetitious piling on is constant.”

Roberts said it’s called compassion fatigue or vicarious trauma and it’s important for people with jobs at which they are regularly exposed to trauma to understand it’s a possibility.

“Despite what may be communicated publicly, we have the best of the best in terms of services,” Lawson said of the OPP.

He added the relationship between OPP officers has changed.

“We have come closer together because of what we’ve gone through as a detachment and I think that’s been a positive from lots of negative,” he said.

“So we can learn together and it allows us to showcase some of the great work that we’re going to be doing and that’s already being done here.”

Roots of Hope is a five-year initiative and seven provinces will be participating and feeding local data to get a national perspective on suicide in Canada.

World Suicide Prevention Day is taking place on Sept. 10 and this year’s theme is Working Together to Prevent Suicide.

There are a number of activities taking place around Wellington County:

– Sept. 10: community members are encouraged to place a lit candle near a window at 8pm. The candle is a beacon of caring and compassion and recognizes those who are bereaved by suicide or survivors of suicide.

– Sept. 10: community butterfly release at the Kitchener Public Library at 85 Queen St. N in Kitchener. The event takes place from 4:30 to 6:30pm with the charity barbecue ending at 6pm and the butterfly release taking place at 6pm.

– Sept. 13: community barbecue in Mount Forest from 11:30am to 1pm. The lunch will take place at the M&M Food Market on Main Street in Mount Forest and will include hamburgers, chips, a drink and a cookie. A donation will support the H.O.P.E (Healthy Opportunities Promoting Empowerment Destigmatizing Mental Health) committee.

– Sept. 14: Paws for Mental Health at the Guelph Public Library Main Branch from 11am to 1pm.

For those seeking support, Waterloo Wellington is the only area in all of Ontario to have just one phone number that will help callers get to the appropriate agency.